A post about Parkies and my greatest hobby mistake.

A few posts back I said I was going to do some more personal posts, not necessarily for myself (in this case it partially is) but also for my kids. This post is really at the core of my collecting life and some of the best memories of my life in general and one of the biggest mistakes too.

My step-father is the one who got me into collecting and I got him into collecting. I received a pack of cards about 22 years ago and it changed my life. I collected those Panini stickers and stuff, but this was different. I was hooked on hockey and much like OPC wanted, I did get "High on Hockey". My step-father in turn ended up taking a serious interest in card collecting as well and it was something we would end up doing together.

My step-father (whose name was also Dave) didn't really have much use for me as a kid at first. He was in a tough situation, he liked my Mom, but my Mom came with baggage (me and my sister). They were both 24ish when they started dating in the 80's and I can certainly respect how that would have been tough for him coming into a relationship without having an interest in raising two kids who were pretty messed up after a divorce. Nevertheless, he tried to make things work and his idea of parenting certainly differed from my own father's much like parenting in the 60's was different than the 90's. As the years went by it got easier between him and I as we both grew up. I started to wrestle and that was a common ground between us and I even got very good at the sport and he was becoming proud of me. He would coach me on the sidelines and there was even a point where I found out he was bragging about my city and provincial successes. Hockey (especially card collecting) became a second common ground as I got older and understood the game more we would talk about it and watch it for hours on end. I remember being 12 years old and staying up until midnight watching the west-coast games on satellite and spending loads of my paper route money on packs and packs of cards. We even went splits on a 500 dollar rack case of 82-83 OPC (silly I know).

A divorce would eventually get between Dave and I (in 1993), but we did our best to try and stay in contact and my half-brother (one of his two children he would have with my Mom) made it easy because we both had Michael in common. Tragedy would strike a little more than two years ago, my step-father (I still called him that) would suffer a heart-attack and die in his sleep at the age of 50. For those that know the song Cat's in the Cradle, it certainly applies here as I didn't do the best at staying in touch because life gets busy etc, but I did see him in person about a year or so before he passed which was nice because I lived 3 provinces away. Despite that, the sting of his loss still remains, and I do have some regret about not making extra calls when I could and sending those extra emails when I had a chance. However, he did know about the birth of my son and I believe that he was proud.

One of the best memories I have ever had of my step-father was buying our first two 1951 Parkies. I was in Kenora, Ontario visiting family and he was going to join us a few days later. I was 12 years old at the time and was wandering downtown when I found a little hobby shop. It was called Newcan Coins and Collectables and I went in to see if they had any hockey cards. The shop was small and very old and they seemed to specialize in coins and other things, but there were a few ancient hockey cards (not sure what ones anymore) on display. I spoke to the owner and asked if they had any other cards, and he said that he just got a big collection of 1951 Parkhurst cards and they were going to be there in the next day or two. I ran to my grandmother's house to call my step-dad. I asked him if there were any from that set we should get and he gave me a short list of players I never heard of and the next day I took that list in to see if the owner had any of those. Sure enough two from that list were ones he had.....Pentti Lund and Edgar Laprade. Both rookies, both Thunder Bay boys and players I would have much more knowledge of as I got older, but at the time I knew little.

When my step-dad arrived in town, we both went to the shop and probably spent like an hour looking at all the cards that were in the shop together and the two cards we wanted were were in and we walked out with  the oldest and neatest looking cards I had ever seen in my life at the time. Neither were in mint condition by any means, but both were pretty decent and both were 25 bucks each. I don't know why that day was any more special than the countless others Dave and I went to the card shop, but that day stands out the most. I would eventually buy most of my step-dad's collecting including those two cards. I would eventually move away with my birth-father and only see my step-father once a year. I would even eventually sell him those two Parkie cards when I needed some spending cash in high school, a move I began to regret almost immediately and currently regret significantly. I really don't know why I sold him those cards, I know he really wanted to get them back from me and I needed some money for some reason or another so that is WHY deal is made, but at the same time I don't know why I would have even considered selling them. I guess it is a life lesson that I still remember to this day.

Time is one of those things that is emotionless and even though they say it heals all wounds, it flies by and forgets both the good and bad equally. Since that day in the shop, my mother and step-dad would split within a year, and I really don't know where the time went. My step-father would settle down with a new partner, raise my little brother. I would move 8 hours away with my father and complete HS, and two university degrees before moving out east and completing two master's degrees, got married and started a family of my own. We would chat occasionally over email or over the phone, but as time would go by that would happen less and less. It almost seemed like I took for granted that he would always be there and maybe someday I would try and get those Parkies back, but alas that isn't and wasn't true. With his passing I lost a chance at him ever meeting my Son and future child, I lost any chance at teasing him about the Canadiens, any chance of  any chance of those cards went too. In some respects they don't matter because they are only cardboard but in other respects they mean so much because of what they meant in terms of sentimentality. I spoke to his widow, I spoke to his mother and I even spoke to my brother, I told them of the importance of the cards and offered to pay anything they wanted. For whatever reason (I am not judging), she didn't want to part with them or maybe she just gave them to her own sons, I really don't know. She has since moved on to a new partner, my brother is living on his own with a partner of his own and the cards are out there somewhere including the two that helped bond my step-father and I. I have given up on trying to buy them back and honestly, I don't think it matters that much. However, I did want to try and get a suitable replacement for those cards and after over a year of searching, I found two cards that are dead-ringers (as far as my memory goes) for those two Parkies I once owned with my step-dad. 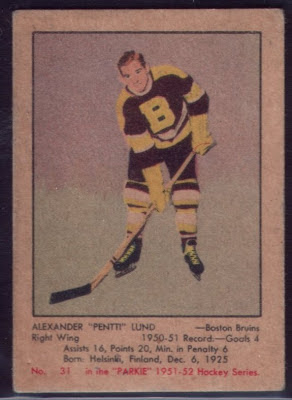 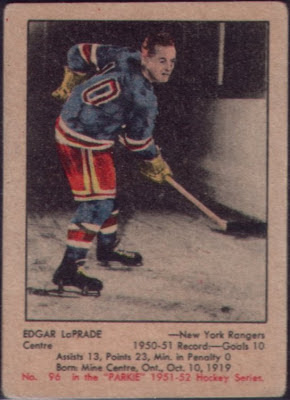 Both cards were crease free like these and both were very sharp in terms of colour etc. If memory serves me right, I am pretty sure my Laprade was diamond cut ever so slightly much like this one was.

As far as the future goes, I don't know if I will include these as part of my Parkhurst project or if I will leave them separate from the set. As of now, I do have another Lund rookie, but I currently just have this Laprade. I have plenty of other cards in my collection that I obtained from him through trades, gifts, but those two Parkies are ones that I do regret letting go and who knows what the future will hold, maybe they will find their way back to me someday, but I think my willingness to let some cards go has diminished because I do sometimes wonder what else I will regret letting go.