The Devils have been a team in transition. Since our last playoff appearance (2012 Stanley Cup Finals) we have been slowly turning over the roster and the position most affected has been on defense. We used to be known as the no-name defense but in a couple of years we will have one of the best blue-lines in the NHL. Don't believe me? That's fine, I will let the team do the talking but I figure in about 2-3 seasons it will be our strong point once again.

One of the best surprises of the season has been the play of Damon Severson. Prior to his broken ankle he was playing every bit as much as Aaron Ekblad and even was having as much as an impact as the 2014 first overall pick. However, the ankle injury forced him out and when he came back he had some rust and didn't quite match his early season performance. Well a summer of rest and training will hopefully rejuvenate his game and he will only continue to progress. 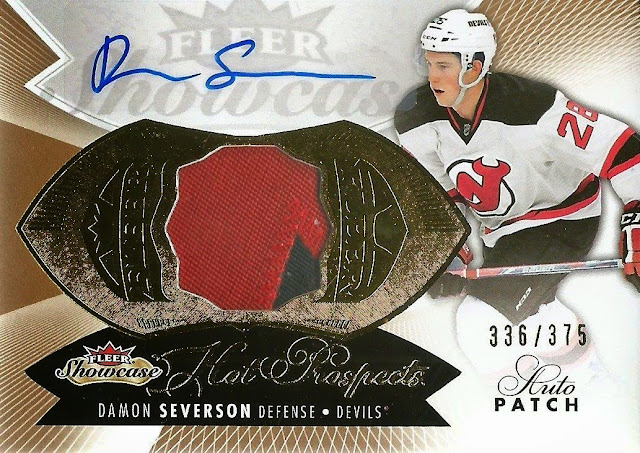 I am a pretty big fan of these despite their low book value. A good two colour patch to go with a sticker auto and a print run of 375.

For people who don't follow the Devils, Severson finished this year playing 51 games (5 goals, 12 assists, 17 points) which was good enough for 4th among rookie defenseman and really he could have been 3rd if he played a few more games. Damon also was 2nd among rookies for average ice time per game with 21:57 (2 seconds behind first). So to say he was pulled from the pan and put in the fire is an understatement, but he handled himself well and I look forward to seeing what he is capable next season!

OK, does it make me a sucker if I know I am a sucker? Well, when Upper Deck came out with yet ANOTHER let's celebrate our past insert I was wondering when will it all end. Truth is, I have missed out on ALL the other celebrations so why would the 25th Anniversary be any different? Well nostalgia got the better of me and I guess the silver anniversary was the one that made me cave. While I have yet to buy any packs of this year's release, I did at least hold out until Series 2 came out and featured my beloved young gun buy backs and I bought a former Devil Bobby Holik for a mere couple dollars! 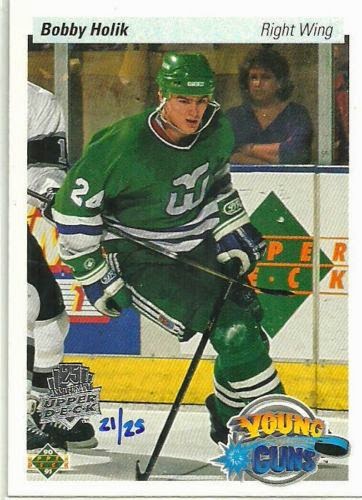 So I paid a couple dollars for a 50 cent card but it does have some foiling and a handwritten number 21/25. Enough cynicism, what I do like about the card is it represents the 25th anniversary of my collecting, its a rookie of a player who was very instrumental in the Devils winning their first two cups and finally he is wearing at sweet Whalers jersey which is just one of those uniforms that you only appreciate once its no longer in the league!

One PC that has been neglected over the years is my Jordan Eberle one. I even traded off one of my Eberle auto rookies (Donruss Rated Rookie) so I feel like I needed to balance it off and bring in a new one and a few months ago I managed to get a Red version of a card I already owned and loved. 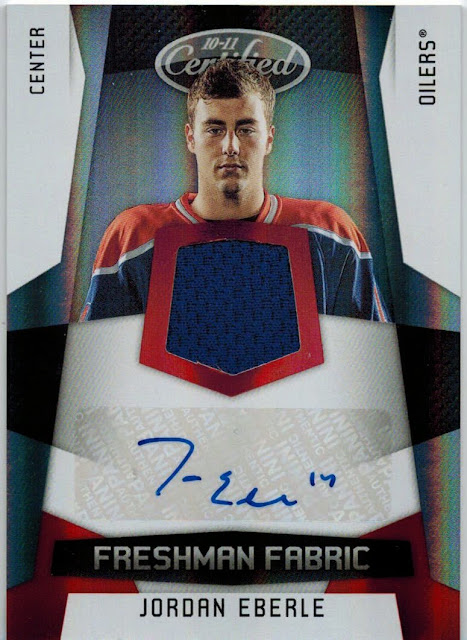 Red front and numbered 14 unlike my regular version of this card. Also a different coloured swatch which is also a great feature since they look amazing paired up. 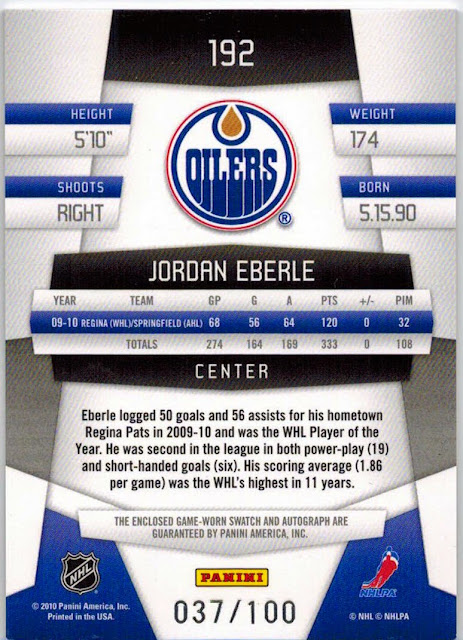 Here is the back, nearly identical except it is numbered to 100. Not a bad addition and pleased to have it in my possession. I am tempted to try for the other parallels but probably won't actively pursue it since many have been probably scooped up and sit in collections or are still buried in packs.
Posted by Pro Set Cards at 3:44 PM No comments:

Well, since I don't have my latest Tall Boy scanned and I have a free moment, why not feature a different pick-up in the last few months. Given his win last night which could be his last of this season, I am featuring Carey Price. 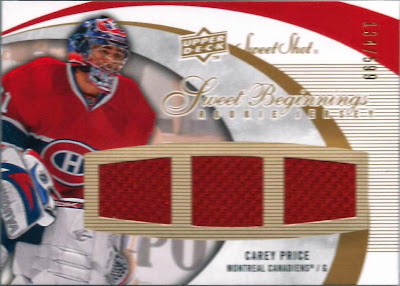 This season he was on fire and carried a pretty average Habs team into the stratosphere. Please forgive my scan, I didn't want to take it out of the one touch holder and clearly that was a mistake as it is pretty blurry. I assure you this is a gem and I love the Sweet Shot cards because they are filled with frills like player worn swatches and serial numbering but can be had for less than a Young Gun of the same player.
Posted by Pro Set Cards at 10:56 AM 1 comment:

Here is the fourth Tall Boy in my collection and I already have news, I managed to pick up a fifth! So if you are disliking these posts, the end is extended just slightly and if you like them it has be prolonged just for a bit longer. This post is about HOF'er Norm Ullman. 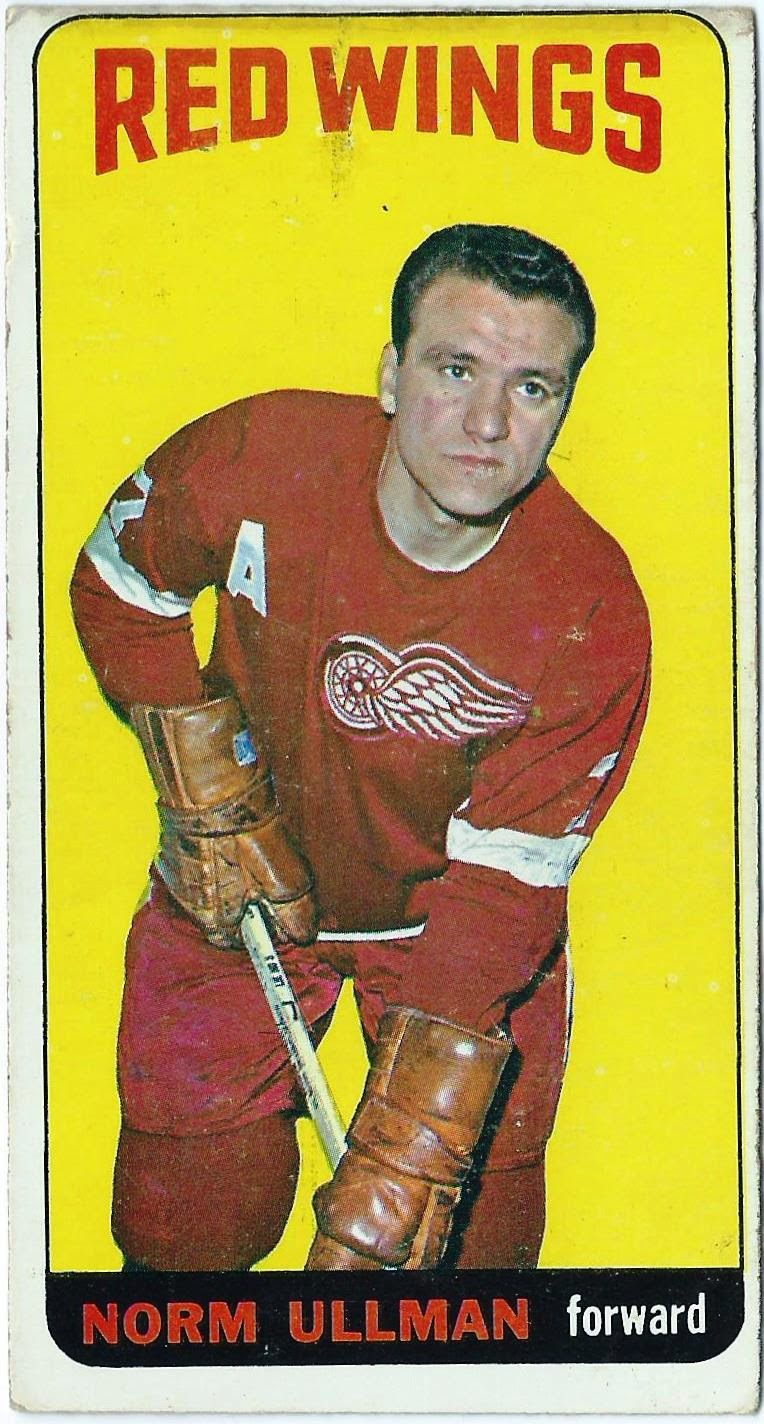 Norm has made an appearance in my collection before as a TTM return so I am definitely a fan of him as a person and a player. I am a pretty big fan of this card and love the look of the old gloves and the colour scheme is just awesome. 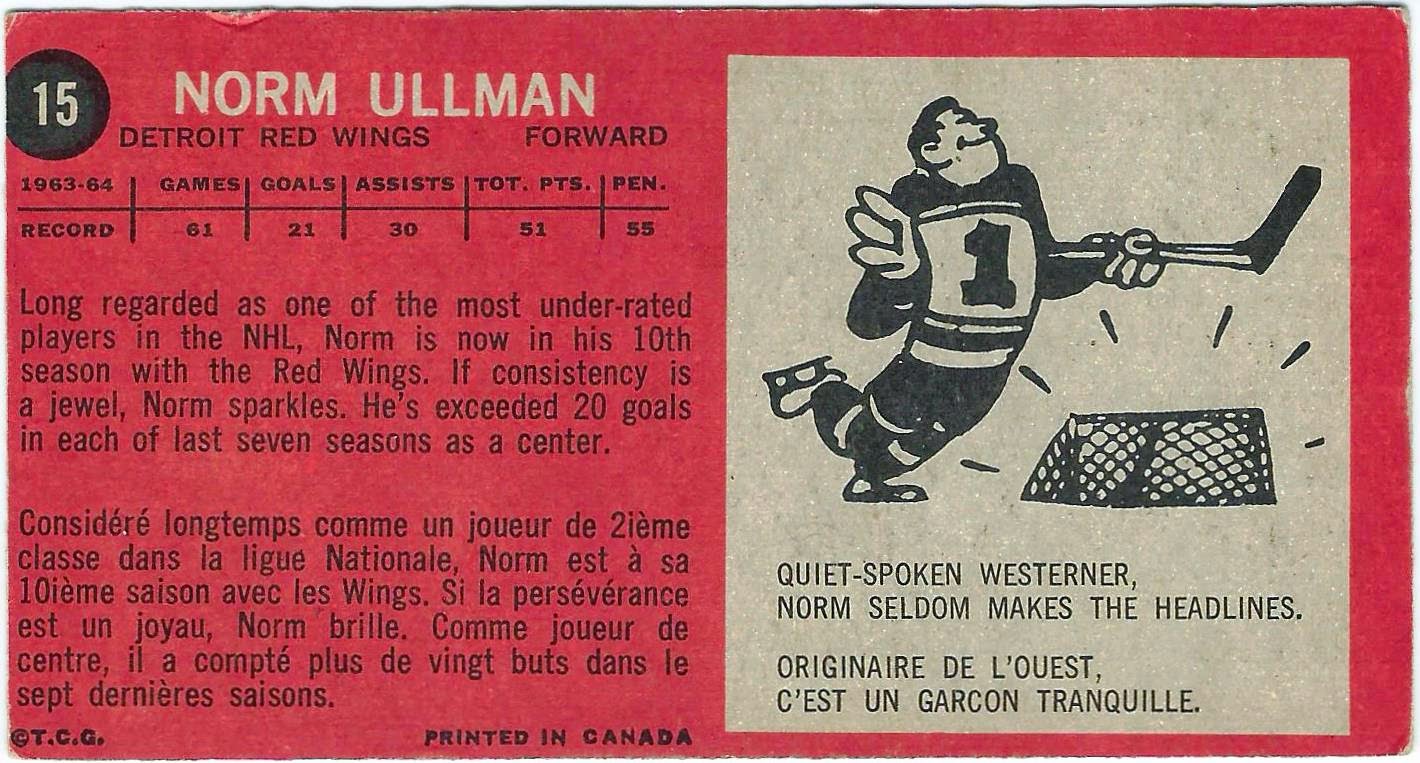 Here is the back side, same as the previous with facts, stats and a comic. I am not sure if Norm was insulted or flattered by his comic but personally I thought they could do a little better on this one!