Yes ladies and gentlemen you read that title correctly! Once upon a free agent signing I sold my 07-08 The Cup Gold Clarkson for a decent price considering it was damaged. Well since then David's career hasn't gone as planned and I have forgiven him and welcome him back and hope he can straighten out his career. In doing so, I managed to buy a PAIR of his The Cup Gold rookies for much less than I sold my damaged one for. Truth is most Leafs fans are unloading his cardboard after paying a premium (not unlike the Leafs) and it is a buyers market. Here's hoping he can restore some faith and get back to his potential! 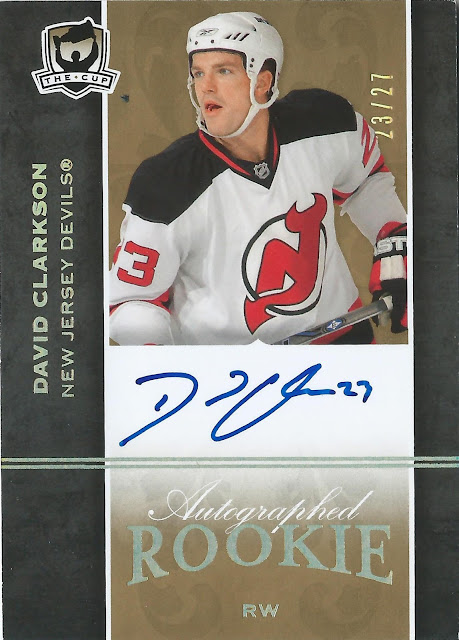 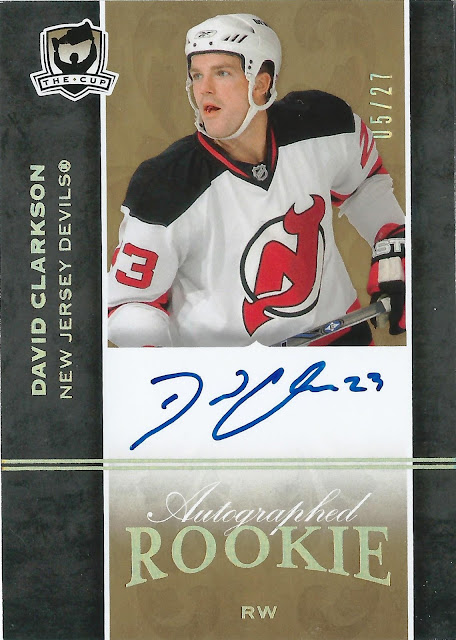 This one is numbered to my favourite number making it an equally awesome Dave 1/1.


Well Mr. Clarkson, you have your work cut out for you but I believe in you! So Merry Christmas David Clarkson and Merry Christmas to all those reading this! I sent out a few packages today and a few more will go out in the New Year. Thanks to all those who returned after my hiatus and I look forward to 2016 coming as it can't be any worse than this year.....I don't need to knock on wood here ;)

Ok, the parallels and this title are a little bit much I know. But, it is partially that reason why many of these Trilogy rookies have found their way into my home because they are affordable. Leon might be the best kept secret because ever since McDavid went down, he has come up and put up some pretty impressive numbers. As of today, Leon is 4th in the NHL when it comes to points per game and if he plays the full season at this pace he will have 29 goals, 59 assists and 88 points which is pretty impressive for the second year player.

I have had a chance to watch him play a few games this season and I am very impressed with all aspects of the game and his size was one thing that really stood out to me and how well he plays with the puck. His play definitely gives Edmonton some options about moving some of their other star players (particularly a forward), to hopefully add a quality defenseman to help out the back end. 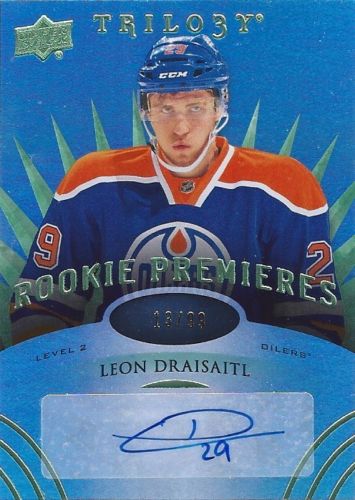 Like the rest of the Trilogy rookies, this is on a foil board with a sticker auto. The green isn't the nicest of colours but the /99 definitely makes it much more tolerable. I just wish the more rare the card the better the colour choices. His auto isn't very exciting but I do appreciate seeing his number with the signature. Pleased to add this to my collection and I hope Leon keeps developing into the superstar I think he could become.
Posted by Pro Set Cards at 4:00 PM 2 comments:

Huge Pile of 13-14 UD Game Used including many HOF'ers

I have mentioned in many posts previous how great my LCS is for finding random deals and the owner's dislike of game used cards. They have always tended to be in my favour and this batch I have to show off today are a result of his dislike and eagerness to unload game used cards on the cheap. 13-14 Upper Deck was bought in mass quantities by people in Nova Scotia in the hopes of landing one of their very own...Nathan Mackinnon. As a result lots of boxes were opened and at a rate of 2 per box game used cards found their way into the 3 for $5 bin. Thankfully Upper Deck included many Hall of Fame players and future Hall of Fame player in that release and here are some that I pulled and others than I bought from the 3 for $5 bin. 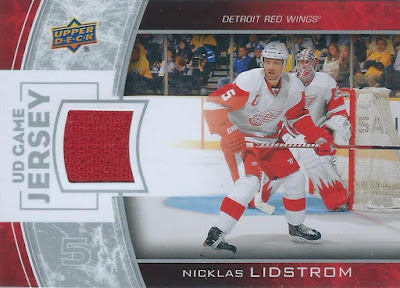 Personally I wouldn't call him the best defenseman of my generation because there were so many who I felt were every bit as good, if not better. But there is no arguing with 7 Norris Trophies and 12 All-Star appearances. 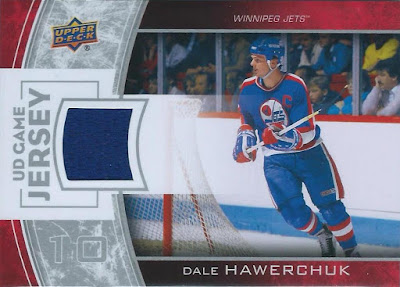 We all know I love this guy so I won't go on and on about him. I think his 81 goals in 72 games during his final year of junior to go with 183 points is just amazing. 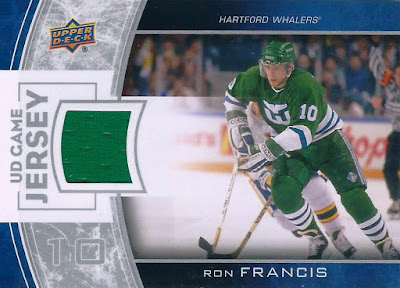 Ron is second all-time in assists with 1249. Can't remember who's first but this total is pretty impressive. 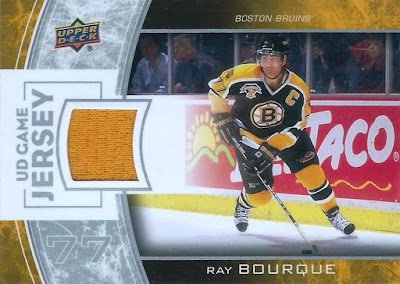 No player has taken more shots in the NHL than Ray Bourque. He is first with 6206 career shots. 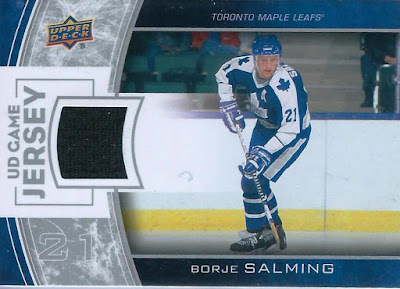 Only 3 players have been on the ice for more power play goals against than Borje (621). They are Chris Chelios (708), Ray Bourque (687), Mark Messier (683). Not bad company for a relatively unwanted stat. 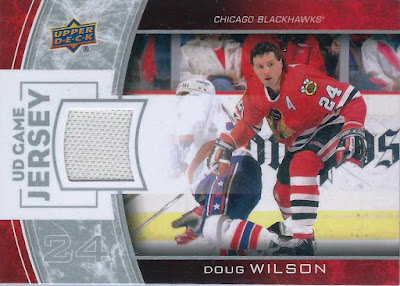 Doug is a 7-time all-star who also won the Norris in 1982. He would score 39 goals and 85 points that season which are both very impressive. 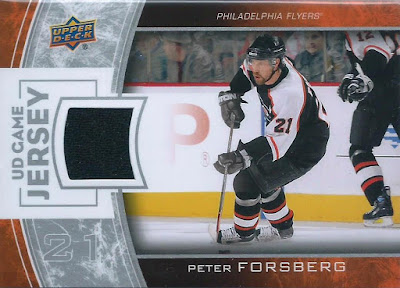 Peter's 1.25 points per game average leaves fans wondering what could have been for his career if not for feet and ankle injuries forcing him to miss time an a relatively early retirement. 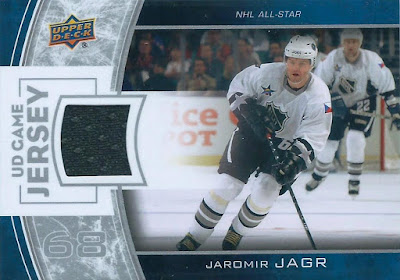 Jagr continues his assault on the record books. 4th all-time in goals and points and rising! 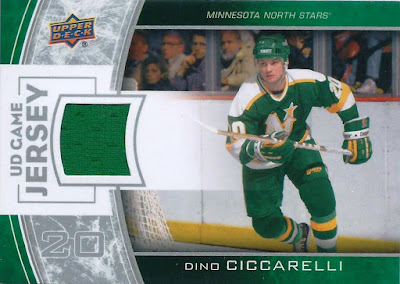 Dino was just solid all-around. However, best known for scoring and he finished up with 232 career power play goals which is good for 9th all-time. 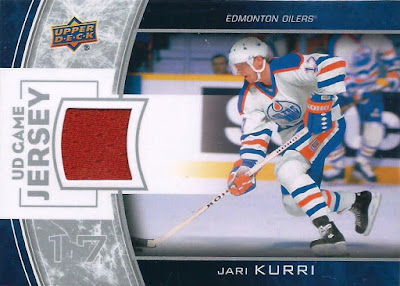 Jari scored an impressive 39 short handed goals in his career which is good enough for 6th all-time. The leader in that department however scored nearly double that and I think played on the same line as him (Gretzky). 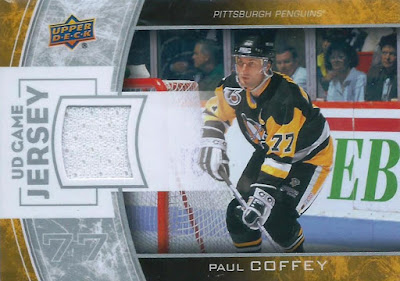 Another former Gretzky teammate. Paul is a 3-time Norris Trophy winner who nearly scored 50 goals in a season (48) which is a total I don't believe will ever be touched again. 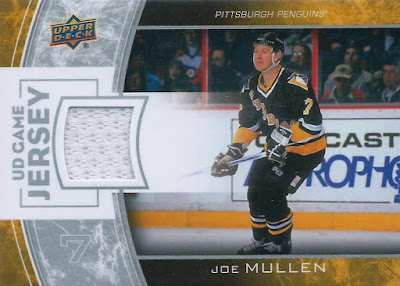 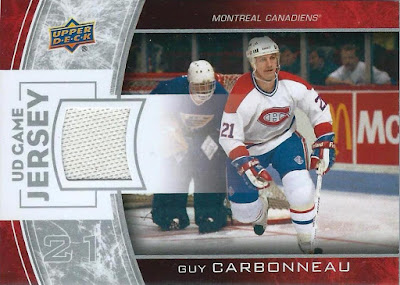 I've heard people argue that he belongs in the Hall of Fame. He is a 3-time Selke and Cup winner, both are pretty impressive. 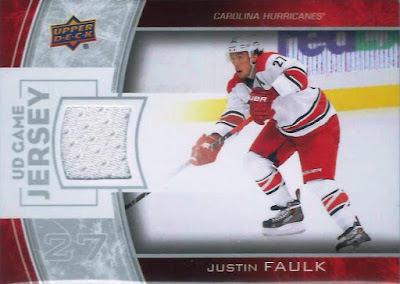 Future superstar defenseman? At the moment in time, he is on pace to score over 30 goals which has only been done twice since 1990. Kevin Hatcher ('93) and Mike Green ('08) 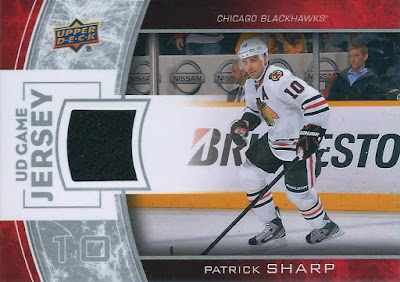 Patrick has already won 3 Cups and could find himself on a team this season to win his 4th. He owns a very respectable 10 goals and 22 point in 30 games while taking on a leadership role in Dallas. 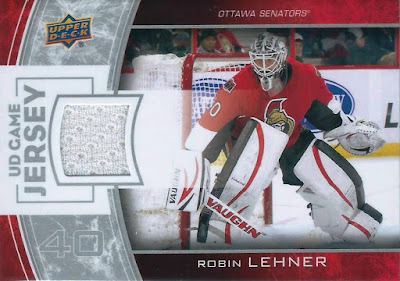 Ok, not all my jersey cards are amazing. What does the future have in store for Robin in Buffalo. The future will definitely reveal it soon enough and I am guessing good things. 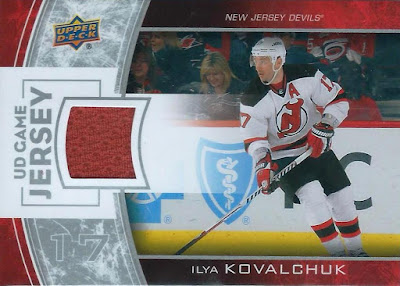 Once upon a time I would have enjoyed this card. Now I just own it and nothing more....

Well there you have it! I pulled a couple of these but for the most part, they were purchased at the LCS in my 3 for $5 bin which is pretty awesome and always being topped up which means I have a few more to share in a future post! If any interest you, please let me know as I could be convinced to part with some.
Posted by Pro Set Cards at 3:11 PM 3 comments:

Think about your favourite team. Do they have a face of the franchise? When I try and think about the other 29 teams in the league and their current roster, quite often an image of a player pops in my head and for that player I have a hard time picturing them anywhere else because they embody that team to me. Right now Anze Kopitar is working on a new contract, but there is a chance that he may sign somewhere else and for me personally I can't see that at all. True, it is very likely something that could happen but given how long he's been there and what he as done, I have trouble seeing it. Same with the Sedins, they are Vancouver to me. Look at the Ducks, could you see Getzlaf playing for any other NHL club? I don't think I can come up with one for EVERY team because there are a few like Toronto who are in a state of flux but even then, JVR is likely a player they will hang on to regardless and he is who comes to mind for me with the Leafs.

For the Devils, we have been pretty fortunate. We have had Mr. Devil (Ken Danyeko), perhaps not the best player but certainly was consistent and has three Cups. Martin Brodeur until the unthinkable happened and he left for a few games. Right now, I would say that person is Adam Henrique. The goal's he's already scored for us, and how everything the he does seems to align with our franchise and it's past and future directions. Not a bad guy to have if you ask me. Is he our best player and will he be? No, but he has all the other intangibles that you do want and they are the reason why I consider him the face of our franchise. 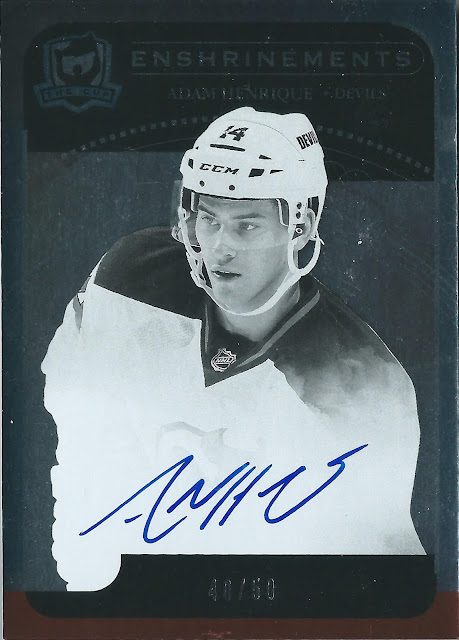 Here is that face in foil form! Please excuse the debris that always seems to follow foil scans around. This card is a nice one in person and was designed rather well if you ask me. Nice black and white foil with a trim of red on the bottom.
Posted by Pro Set Cards at 9:33 AM No comments:

Being a blog primarily about hockey and hobby means that this post is a little out of place but since it is my blog and I have written about other stuff in the past this post isn't completely unheard of. The other day I was floored when I heard that Scott Weiland passed away. I know it isn't supposed to be a huge surprise given the lifestyle he had and the numerous poor choices but when you consider how much drugs other people have done and survived you had to figure Scott wasn't as bad as they were. But fact of the matter is we are all different and we all owe a death and I guess it was Scott's time.

I have been a fan of his since the early 90's and have followed his career closely and have enjoyed nearly his entire catalogue of music. I even enjoyed his Christmas album called The Most Wonderful Time Of The Year where I believe he truly demonstrated what an amazing performer he was. It is with great sadness as a fan that I will no longer be hearing any new material but I figured I would throw a simple post out there about one of my favourite performers and a song that I seem to never tire of hearing.

Ok, the hobby does some strange things in order to make a dollar and some times I think it has gone a little too far. I am curious to know your thoughts on this one. ITG had a release in the past year called The Vault where a bunch of cards were bought back, labelled and redistributed with the idea that they were rare and unique (1/1). So here is one example of such card that I picked up this past summer. 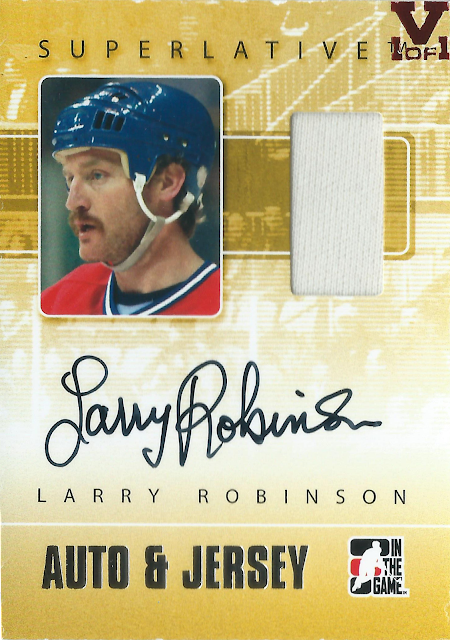 This card was originally from one of the Superlative releases and features a nice on the card auto and a small piece of a Montreal Canadiens sweater. If you look at the upper right you will see the card was defaced with a ruby foil job and the numbering of 1/1. There are 49 other cards out there just like this one but they don't have the ruby foiling. So the question is, does my Larry Robinson card deserve to be more expensive and highly regarded than the other 49 non-ruby foiled copies?

I personally am not sure if it is any more special than it's other brothers but thankfully I was able to purchase this for probably cheaper than the other 49 sold for so I might be inclined to think the foil job actually decreased the value of this card. While I personally don't consider this card a 1/1, I do consider it a nice auto game used card of a Hall of Famer who once coached the Devils to a couple cups and am proud to have it in my collection.