This is my favourite time of year! I love the NHL playoffs. It is a war of attrition, teams play grueling a best of 7 series and a hot goaltender can really carry a team and steal wins at this time of year.
I am going to give my predictions for round one in the East.
Wash vs Mon
This series is not getting much respect from many of the experts. Most are saying Wash will walk all over Montreal and they might be right. I will say Wash is going to win, but I think that they may face a small challenge from the underdogs and I will say Wash in 6.
NJ vs Phi
I have to go with my heart on this one. I love the Devils and in past years I have dreaded some of our opponents or have had a slight bad feeling about the matchup. I don't have that this year, and I think we will win. I will call this Devils in 6 based on some good offensive outbursts and better goaltending on Brodeur's part.
Buff vs Bos
I sort of think that Buffalo didn't want to win their last game and have to face Phi so they tossed the Devs that game and took Boston as a result. I don't know if that was wise, Boston is hungry, and Rask may steal a couple of games. Both of these teams are a little offensively challenged and I think it may go the distance. Buff in 7.
Pitt vs Ott
This series will come down to how well Elliot plays. Fleury have been pretty consistent all season and he saw some rest down the stretch so he will know what he needs to do. Pittsburgh has not been the juggernaut of 08-09 and may seem a little more vulnerable. As a result, if Brian Elliot plays well I could see Ottawa stealing this one from the Pens. If Elliot begins letting in soft ones, then they will be out pretty fast. I will say Pitt in 6 unless it goes 7 then Sens in 7.
Posted by Pro Set Cards at 2:57 PM No comments:

Last night Mike Modano may have had one of the most emotional games of his life. There is some doubt to whether or not Number 9 will have another season left in him. With last night being the last home game of the season and the Stars don't have a hope for the playoffs they stopped the game during the third period to pay tribute to his career. The score at the time was 1-1 and he had an assist on the Dallas goal. The Ducks then went ahead on a second Bobby Ryan goal to make it 2-1 and then in what seemed like a perfect script, Mike steps up for his time and tips in the game tying goal late in the game. If that wasn't enough, Mike then had a chance to win it in overtime but was stopped on a breakaway. So the game goes to a shoot out and Mike who is not known for any shootout abilities was given the chance to go out for his time and he scores the game winning goal in the shootout on what pretty much was Mike Modano Night.
What Mike has done for hockey cannot be measured. He is arguably one of the best American born players of all time and what he brought was more than just ability. He brought CLASS. I saw him in the same light as I saw Joe Sakic. Both were players who were team guys and stayed with their organizations for their entire career. They made players around them better and they lead by example and not by running their mouths. It is hard to say how many more players in the US started playing hockey because of Modano, but it is safe to say he put Dallas on the map in terms of hockey and many players like Bobby Ryan grew up idolizing Modano.
Mike never had a 100 point season, but he was the mark of consistency. Modano had 16 20+ goal seasons, and for a career he had 557 Goals, 802 Assists and 1359 Points in 1458 career regular season games plus a Stanley cup. His point production puts him at the top for American born players and there is no doubt in my mind he will be in the hall of fame when his time comes. With one game left to add to his totals the only question is will he be finished and possibly purchase the Stars with Hull and Gretzky or does he want to take one last crack at Lord Stanley's mug. If he does come back, it would be hard to see him do it with anyone other than Dallas.
Here is his OPC Premier RC, probably the most valuable of his RC's which came out during the 1990-91 season where all cards were produced like they were going out of style. 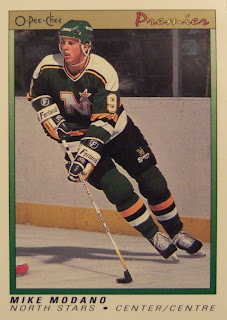 My favorite Modano RC is his 90-91 Upper Deck one. Not as valuable as his OPC Premier one, it does show case his solid rookie season and you have to love that old North Stars Jersey. I was lucky enough to see him in his second NHL season as a kid. He was playing against Fedorov that night and the two of them flying down the ice against each other I found absolutely impressive. 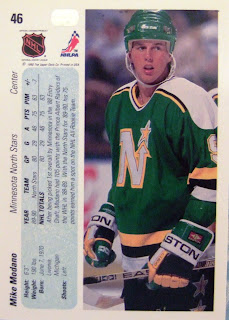 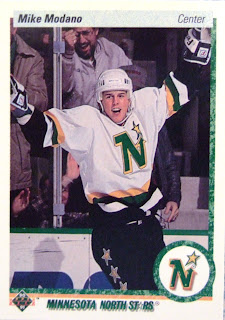 Posted by Pro Set Cards at 7:14 PM No comments:

On Tuesday, Brodeur reached another milestone during the 3-0 win over the Thrashers. Brodeur now has 600 wins and 110 shutouts during his regular season career. Both of these totals are NHL all-time highs and at this current pace, Brodeur could easily reach 700 wins by the end of his career and that would have him at 149 wins more than the second place Roy.

What is actually more impressive is the 110 shutouts. Each season the NHL seems to try harder and harder to increase scoring in the NHL and every season Brodeur consistently racks up the shutouts. He has averaged about 7 shutouts per full season and if he plays another 3 seasons that would run his total over 130 shutout and the next nearest goalie is Roberto Luongo who at 31 years of age his only 51 shutouts. Marty's shutout record could be as unreachable as Gretzky's 2857 career regular season points.

This first card is from the 06-07 UD McDonalds Set. These were tough pulls and I just bought two packs and found this in one of them. Odds of pulling a Clear Cut winner that year were 1:100 and of course I was really happy to see it was a Brodeur. I think this is the most valuable Brodeur card in my collection. 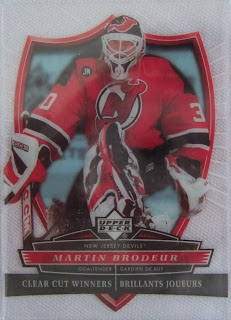 This card was a relatively recent pull. It is the only Brodeur relic card I own and it is from the 09-10 UD series 1. 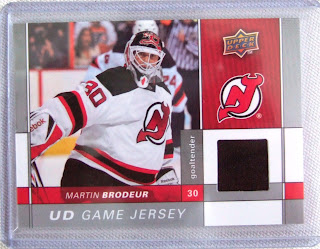 This card is a classic, I must own about 6 of them. This is of course the only legitimate Brodeur rookie card. That year Score pretty much covered the entire first round of the 90 draft. As a result, this is the only card that year to feature Martin Brodeur in an NHL set. Upper Deck that season focused on the top 10 picks so you can find Drake Berehowsky or Scott Scissons in their set which I am sure are still in high demand.....somewhere... but of course no Marty. 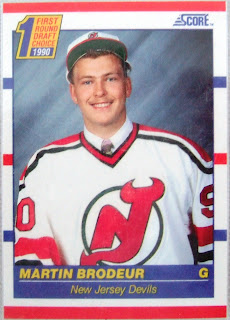 Posted by Pro Set Cards at 3:24 PM No comments: