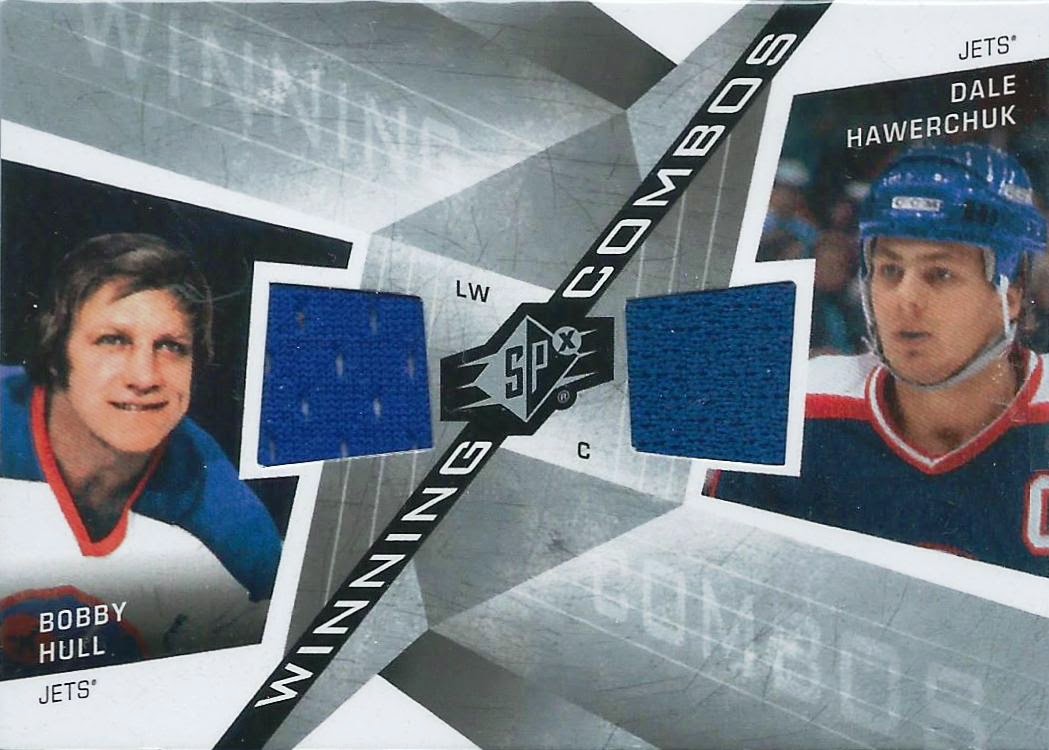 Normally I write something before the card, but not today. Check out that card. What are your thoughts? Anything surprising? Arguably two of the best players to ever wear the jersey (Selanne is in that discussion too). Swatches are small, but hey, these are two Hall of Famers here! Jersey swatches are different! Can you believe one is game used and the other is event used? Probably, UD loves doing that. But, it turns out the Hull is the game used and Hawerchuk is event used. As it stands, in my Hawerchuk collection, I now have 2 event used and 3 game used Hawerchuk swatches. But more importantly, I have my first game used Hull! Best part, you can't see this on the card but I paid 2 bucks! Never in a million years did I expect to get it but I did. Would you pay that price knowing one is essentially a fake? At the time I didn't know it was a fake but the swatch on the Hull looked very real to me and that is why I pulled the trigger. I know have Bobby Hull autos and a Bobby Hull game used. I do hope to get his rookie some day so I will hold off on the HOF post for now....but that will be a pretty tall order!
Posted by Pro Set Cards at 9:39 PM 3 comments:

Here is another card from an epic twitter trade I had made. There were two David Savard autos in the lot and this was by far the better of the two. On card auto, huge two colour patch and a nice and low print run with beautiful gold foil. What else could a collector of modern cards want? Cards like these make it pretty impossible for me to be strictly vintage! 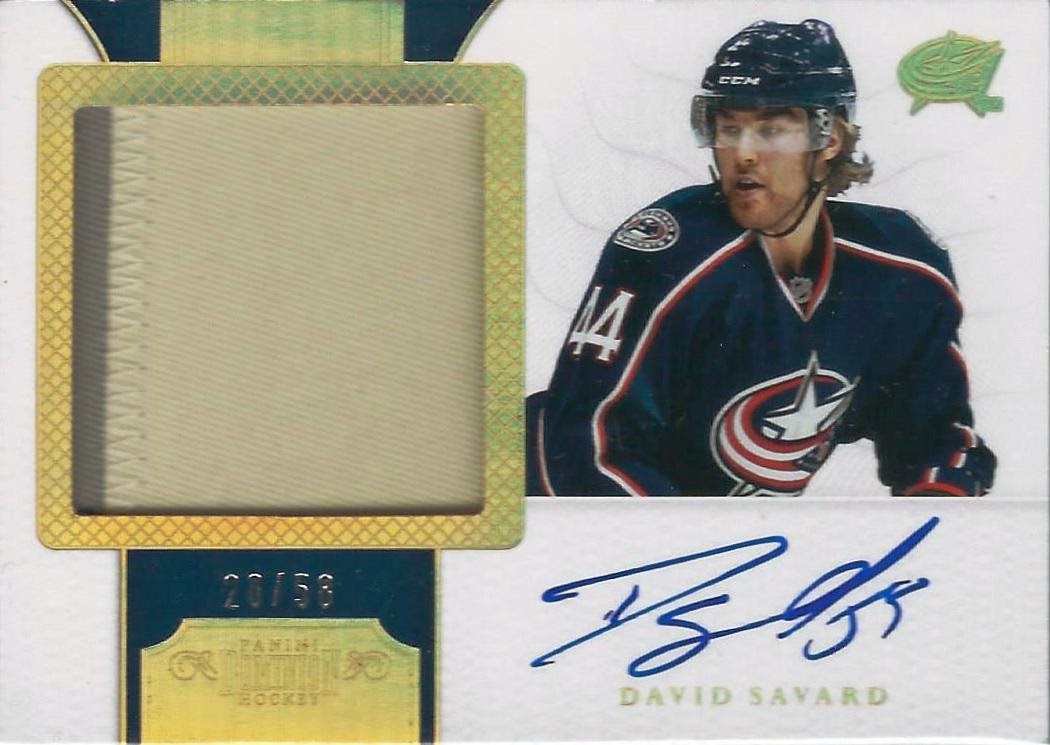 David is a good Canadian kid who is slowly coming into his own in the NHL. As a member of the Blue Jackets, he logs about 22 minutes every night and plays in all situations. He is already at career highs for goals, assists and points with 8, 15 and 23 respectively. At this pace, he should score 13 goals and have 32 points by the end of the season. I believe there is still room between where he is now and his ceiling and I hope he continues to flourish on an exciting Blue Jackets club.

A while ago, I reluctantly traded away my Roy rookie. In all fairness, I got a pretty amazing card which did have a higher book value, but I assure you if I took the time to grade that gem, it would easily fetch full book value on that Brodeur if not more. But I let it go because in the end I liked what I got back in return more.

A few months later, I was searching on HI and a collector put out a call for anyone selling Ryan Murphy cards, well it just so happened that I had a decent one and I would be willing to move! We chatted back and forth and he cited some eBay sales and I cited it had some value to me as a card and in the end we found a very agreeable value where both sides were happy. Knowing I let an important card go away I decided to fix a hole and I landed a SET of 86-87 Topps including Mr Roy.

While the card isn't as nice as the previous, I would suggest it is a solid NrMt (the other was Mint I swear) and the rest of the set is pretty nice. Not having any sets from that year, it is nice to cross 86-87 off my list giving me at least one set a year from 1980-1997 or 98 (can't remember exactly where I stop off). 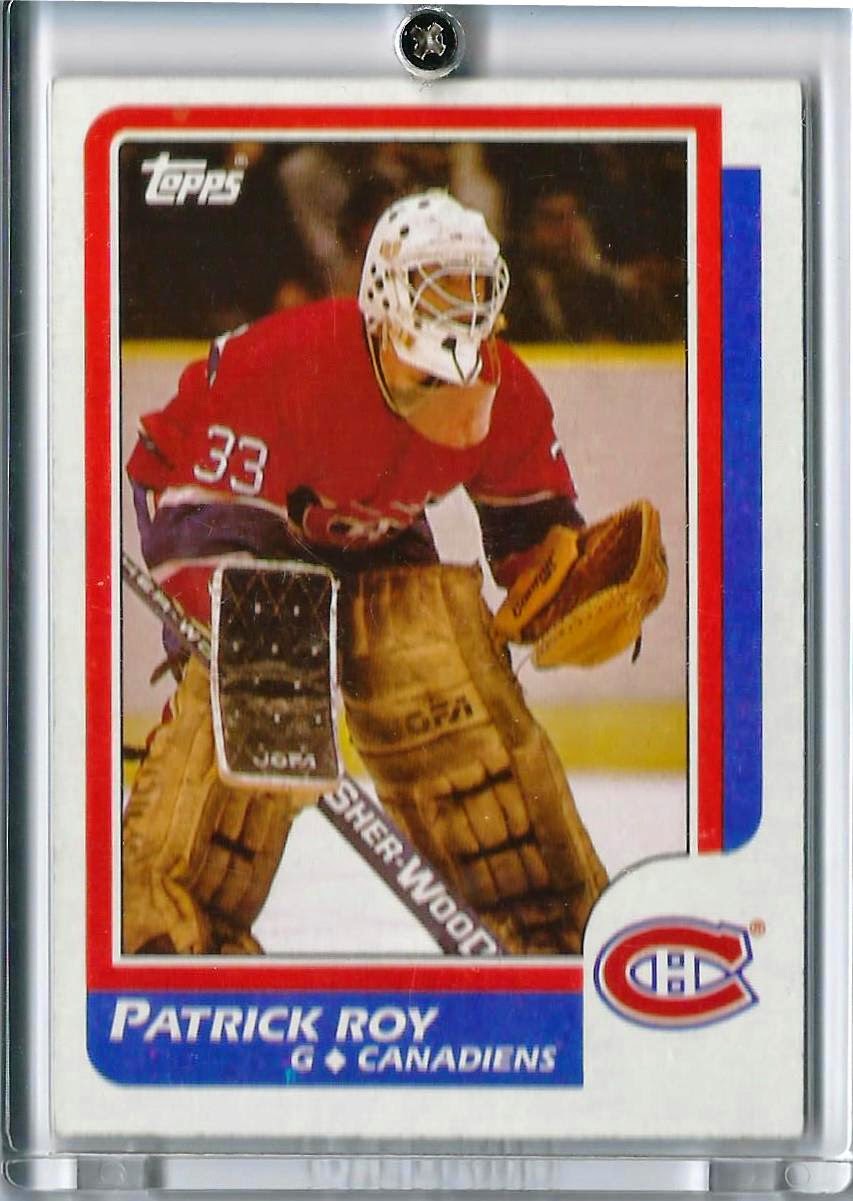 As some of you know, I just had wrist surgery to repair a problem I have had since the summer and this is my first post since the procedure. I hope to be back a little more regularly now that I am feeling better and I also have a few sets I want to share as well as countless additions due to trades etc.

Thanks for bearing with me over the past few months of inactivity etc I promise you at least the same quality I had before (setting the bar low here) ;)