Well the past few weeks of exams and report cards sure took a lot out of me but I want to thank you patience while waiting for this post. Truth is I would have snuck in a post or two if I hadn't promised a big post this time around but alas I painted myself into that corner so it was my job to get myself out which only took a bit of time!

My regular readers will know I am a bit of a Parkhurst nut and honestly it was the 91-92 release that I first chased and subsequently was hooked on the brand for life. The 91-92 Parkhurst set is my second favourite set from the 90's right behind the amazing 90-91 Upper Deck set. In my opinion it was the best set Pro Set ever created, but I am slightly biased of course. In the set, there were a small batch of inserts including a Santa Claus Card and the PHC Insert set. PHC stands for Parkhurst Collectible and I for one ended up collecting a good number of these cards thanks to probably purchasing a case worth of this product as a kid.

The design of the PHC cards was nearly identical to the base cards but on the front there was a badge in the upper right signifying the reason for the card and then the back side was numbered PHC 1 through 9. PHC 1-5 were found in series 1 packs and 6-9 were in series 2 packs. 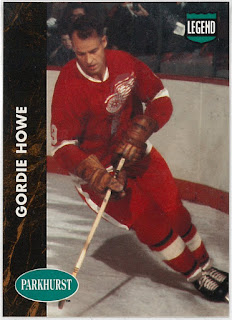 The front side of this card has a nice old time colour photo of Gordie Howe and I love the simplicity of the shot and the fact the Mr Hockey is the only player in the shot. The colours look nice even today and I felt that this set has aged rather well in comparison to some of the drek to come out of the 90's (yes Score I'm looking in your direction). 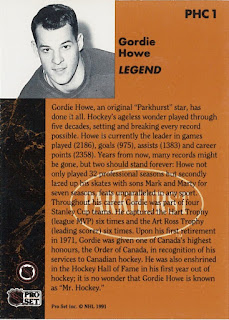 The backsides are clean and again very similar to the base set except it's all text here instead of a season by season break down and vital info. I do like how the Parkhurst watermark in the background works with the overall design of the back. You also get a second image of the player on front and in this case it's a B&W photo of Gordie. If I'm not mistaken, this looks like a cropped head shot of his Rookie Card photo and Bee Hive photo. 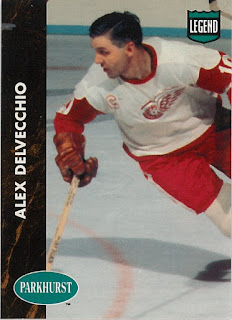 Here's another one of the NHL great's and one of my main PC's Alex Delvecchio. I love that this photo features the white Red Wings jersey instead of the red which contrasts nice with these two cards in the binder. This features Alex later in his career after he has been made captain and the write up on the back features a nice summary of his career. 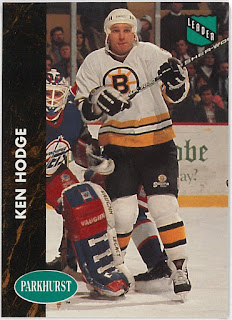 Oh Ken Hodge. I remember stocking up on your Young Gun rookies hoping you would be even better than your father Ken Hodge Sr. Well, you broke out of the gate hot scoring 30 goals in 70 games as a rookie but then sadly would only score 9 more goals over another 70+ games before taking your talents elsewhere. This card commemorates your amazing rookie season where you were the rookie leader in "Rookie Shooting Accuracy" which if you're wondering, he was 21% on the season. 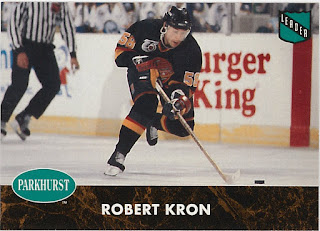 Robert Kron is not a player I stocked up on in terms of rookies but perhaps I should have as Robert did put together a pretty solid NHL career spanning over 700 games. There aren't many horizontal cards in the set but this is the first of two in the PHC insert set and I like the look of this card. Robert Kron was the "Rookie Shorthanded Goals Leader". 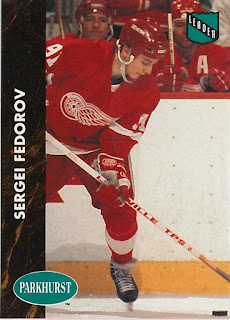 The final card you could pull from Series 1 packs was this gem. Love the wood Louisville TPS stick, no composite here kids! Fedorov would of course turn out the be the best of these three showcased rookies and this particular card is in honour of his season where he was "Rookie Shorthanded Goals Leader" as title he shared with Robert Kron. 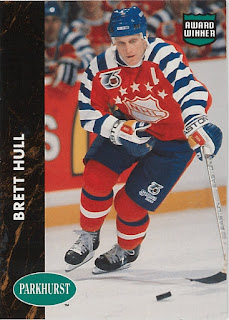 One thing I love seeing is the All-Star uniforms from time to time and here is an example of such. In the case of this card, it is very fitting because Brett Hull was the MVP of the All-Star game. 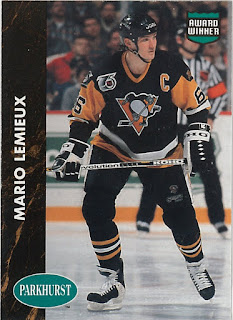 Mario Lemieux makes an appearance in the PHC set as an award winner. In the case of Mario it is a season accomplishment and it recognizes his winning his third Art Ross Trophy. 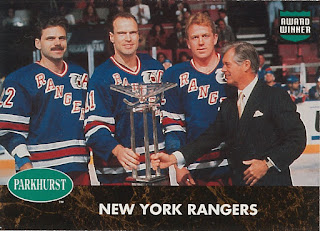 Uh oh, Messier is touching the President's Trophy, maybe he shouldn't have and the Rangers would have won the Stanley Cup? Truth is the Penguins were stacked and there was no stopping them but it's fun to poke at the Rangers all the same! 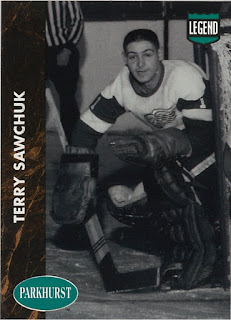 Like series 1, series 2 PHC inserts include a former legend and yet another Red Wing, Terry Sawchuk. I like the B&W photo used here and clearly it is an in-game action shot. Maybe my favourite feature of this photo is his blocker which looks like an over-sized oven mitt.

Well there you have it a nice and simple insert set that I felt has aged rather well in the past 25 years. The player selection is nice and varied and while they could have showcased a few better rookies from the previous year, who honestly knew Ken Hodge would have been a big bust. The set fits nicely on a single 9 card page and is very affordable to any hockey fan out there. Book price is 15 dollars and can probably be found for less at your LCS.  I still check out this set from time to time in my collection and have even been fortunate enough to have the first two cards signed by Gordie Howe and Alex Delvecchio. While the set isn't amazing or game changing I think its a timeless set and worthy of a 4.0 out of 5 rating.

My next couple posts are going to highlight some of the amazing people out there including one card company!
Posted by Pro Set Cards at 1:01 PM 1 comment: