It's been a few years since I have last updated my progress on the 53-54 Parkhurst set. I have added a few more since that time and thought I would share them all in a parade of Parkhurst cards. When I last took count I believe I was at 24 based on my previous post and I will have that number over 30 by the end of it all so please enjoy the next few posts! 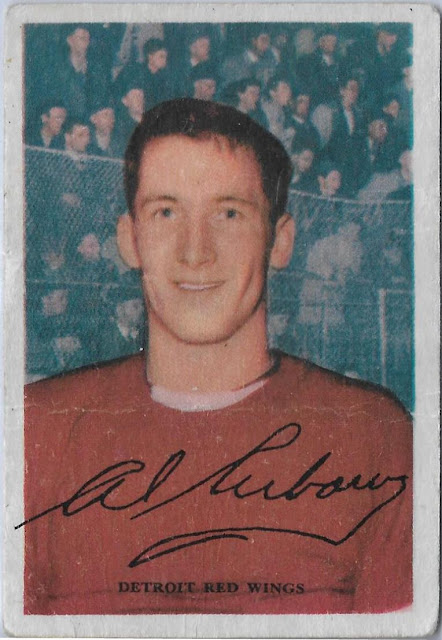 I know what you're thinking, it says Al Arbour on here and you are correct. The Hall of Fame head coach has an error of a RC. It seems Parkhurst put a picture on Bill Dineen on his card instead of Al and his very distinctive glasses. Al's pic does appear in the set but it's on card number 38 instead and it's on Bill Dineen's card. Based on the Beckett and collectors in general despite this card stating everything about Al Arbour, it's considered to be Bill Dineen's rookie. 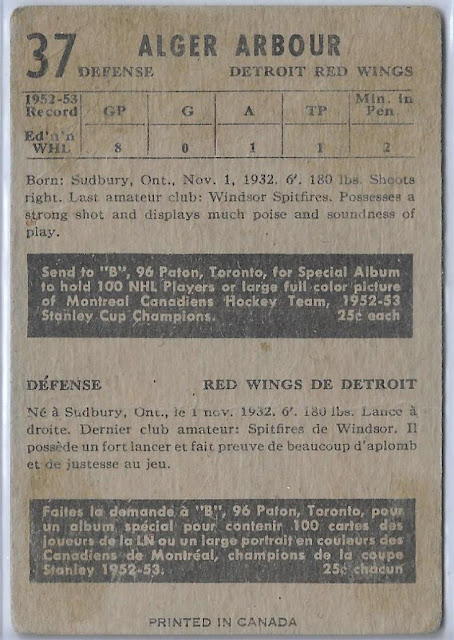 Here is the back side of the card which again talks about Al and his abilities with the puck. Bill started off in the NHL before eventually becoming an AHL star. Bill managed to hit double digits in goals 3 out of his 5 NHL seasons as a player. Bill Dineen was also a coach like Al and was also a successful coach like Al. Bill won two Avco Cups (WHA) and coached for a small period of time in the AHL and NHL. Bill did have a couple sons who would go on to play in the NHL most notably Kevin Dineen who also like Al and his father Bill would spend time coaching in the AHL and NHL. Kevin currently is an assistant coach with the Blackhawks and Bill sadly passed away about two years ago. Bill was inducted into the WHA Hall of Fame in 2010 and will forever be the face of this "Alger Arbour" card.
Posted by Pro Set Cards at 11:36 AM 2 comments:

Back with a line of Golden Misfits

Wow, that was far longer than it needed to be but time is one of those things that seem to fix all. I did a little networking tweek between my desktop and network and all is well again. So, the playoffs have been nearly as surprising as the regular season was to me and I think front and center is the Golden Misfits line in Vegas. 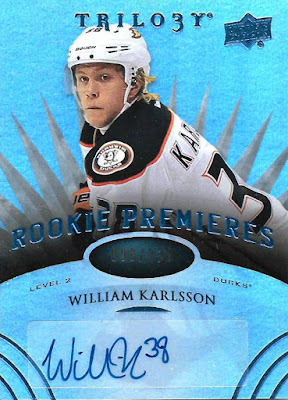 Poor Wild Bill has had to change locations a few times in the last 5 years. Since 2014 he has played for 6 different clubs but it is with Vegas he as truly found a home. Hard to believe he was once a Duck but it is true. He played 18 games with them scoring 2 goals and an assist during that time. Then during trade deadline 2015 he found himself shipped to Columbus as part of the failed James Wisniewski deal which was a disaster for Anaheim and James didn't even suit up for a single playoff game. After stealing him away from Anaheim, Columbus lost him in the expansion draft and the rest is history. 43 goals and 78 points in the regular season and 12 points in 13 playoff games mean Wild Bill is money! 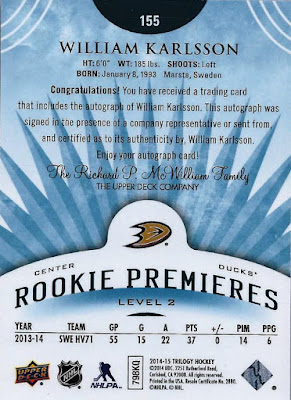 Above is the front and back of his Trilogy Rookie Premieres card. It is numbered to /225 and I landed it years ago in a lot deal. Might have paid 2-3 dollars a card at the time. 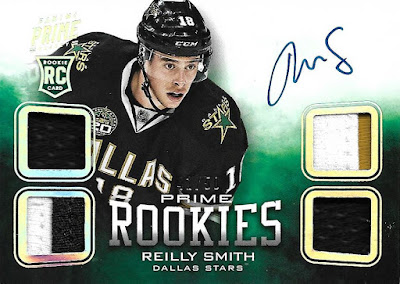 While William Karlsson was clearly the biggest surprise of the line, both the other two guys are players clearly showing they belong among the leagues elite and have put together a great season thus far. Reilly Smith had a great year finishing 4th in team scoring with 60 points but he did so only playing 67 games. Prorated you are looking at a player who would have had 73 points this year. Unlike Karlsson, Reilly has had some success in the past including two seasons where he broke 20 goals and he also hit at least 50 points. Reilly was a player who has done well but was more of a salary dump by the Panthers who felt they had loads of other young players set to get big pay days and needed the room. Good for a team with a need for talent and lots of cap space. 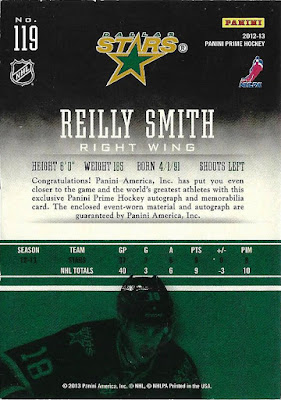 Above is a Panini Prime Rookies parallel which is numbered to /50. I picked this one up after Reilly's first 20 goal season when he was with the Bruins. Reilly has technically been traded 3 times and wasn't an expansion pick up. He was traded out of Dallas as part of the Seguin trade. Then he was traded to Florida as part of a salary dump of Marc Savard and then he was traded to Vegas as a dump of his own salary (5 yr, 25 million) which as he current production is a great deal. This post season Smith has had 14 points in 13 games. 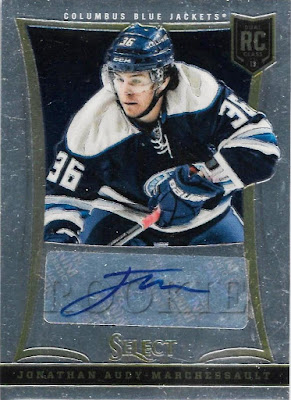 Last one from the top line is my favourite player of the three and arguably maybe even the most talented. Originally Jonathan Audy-Marchessault, he was a player who played very well in the Q but always was deemed too small. However, he managed to score very well in the AHL as well but despite some excellent production (295 games, 254 points) he would only see 49 NHL contests between the Jackets and Lightning over three seasons. Caught deep in the depth chart meant he was expendable and the Panthers decided to give him a shot. A few injuries to the Panthers roster gave him some more ice time and he delivered scoring 30 goals with the Panthers last season. Seeing there was a looming salary cap issue (perhaps Luongo's crazy contract has lead to these issues) they didn't protect him and Vegas said thank you very much! 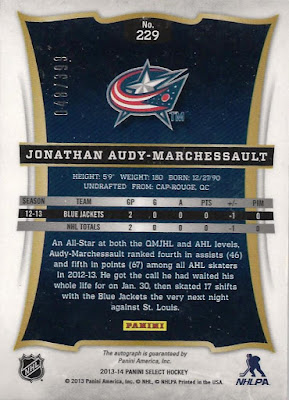 While technically his goal production was "down" this season, with just 27 goals instead of 30, his assists were up significantly as he managed to bump his career high from 51 points last year to 75 points this year. Above is his Select Auto Rookie which is numbered to /399. I landed this one from the LCS last year from pocket change (about 3 dollars) just as he was starting to heat up for the Panthers.

So time will when this Cinderella story will end and regardless of it's outcome I know this will be among one of the greatest stories in modern NHL history and we can certainly say the top line had much to do with the success Vegas has achieved.

What are your thoughts? Have you had a few of the Vegas players in your collection without realizing it? When do you think this season will end for them?
Posted by Pro Set Cards at 4:30 PM 10 comments:

Will My Scanner Ever Get Fixed?

However, since I upgraded my wifi network my scanner has not wanted to participate in the party. This isn't the first time I've encountered this issue, its just the first time I've had this problem and my solutions haven't worked. I will give it a proper college try this weekend and hopefully be back posting on Monday! Hope all are well in the blogging world and I look forward to being active soon.

In the interim, here is something in honour of the Jets making their first ever conference finals from my COMC account. 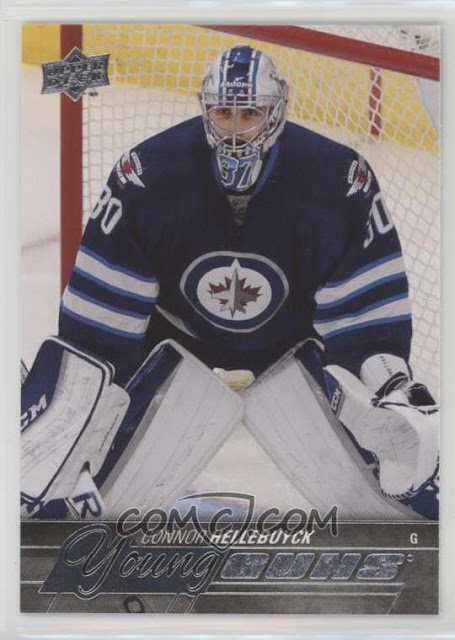