Back from camping but I don't have to time to write up my big two box break so I thought I would share a fun moment and a pair of packs. My oldest son (Quinn who is 4) asked me what I wanted for my birthday and he gave me top options toys or hockey cards. I was very surprised that he seemed to think the hockey card answer I gave him was a good answer (though I am sure he would have loved it if I wanted a toy). So to help him out I picked up two packs of UD Series 2 which he in turn gave to me on my birthday. Before I opened the packs I was secretly hoping for a Duncan Keith base card because he is Quinn's favourite player (because he was on Team Canada) and sure enough I actually got one which in turn I put in a top loader and gave back to him as a gift.

In addition, I also got two pretty awesome cards in those packs. Here is one of them: 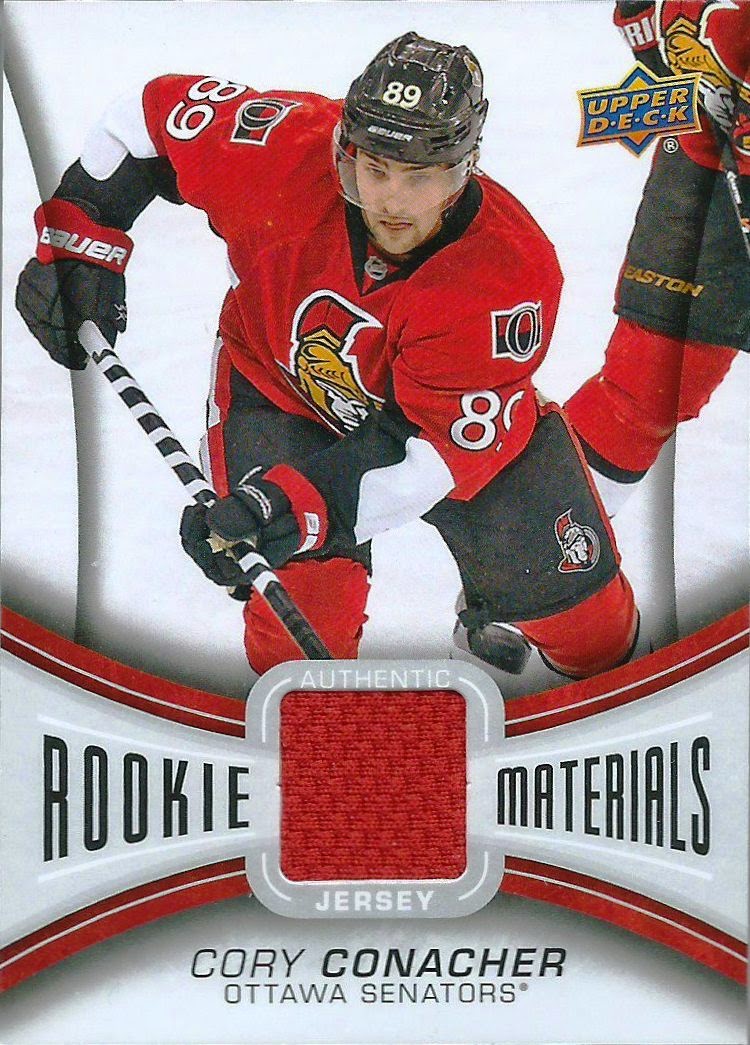 A Cory Conacher Rookie Materials card. Oh how the mighty have fallen. He went from being an early contender for the Calder Trophy to being on his fourth team in just two years. I think if anyone is going to bounce back, the Islanders are the perfect place to do that feat. It worked for Matt Moulson so why not for Cory Conacher? It won't be easy on a team with lots of young forwards but his experience should set him apart and I hope for a big year for him.

The other card was a pretty sweet OPC rookie of Nathan MacKinnon. That is my second MacKinnon rookie with my other being a Select one. While the hits aren't huge, two hockey fans got something fun out of those two simple packs and my son and I shared a fun moment together and I hope there are many more of those in my future.

Coming up will be my two box break and guess what? Richard makes a return!
Posted by Pro Set Cards at 2:01 PM 2 comments:

About a year ago I landed this card in honour of my team losing in the Stanley Cup finals. While I landed it just to have a piece of the finals, I really didn't care who was on it. My plan was just to have a piece of the finals because a Gretzky one or a Fayne one was all from the same net. However, there are also much more rare Net Skirt cards which have autos and those are much more player specific if you ask me. After all, their auto is on the card and that personalizes it much more than a pic. I found this one at random a while back and bought it for a song and a dance. 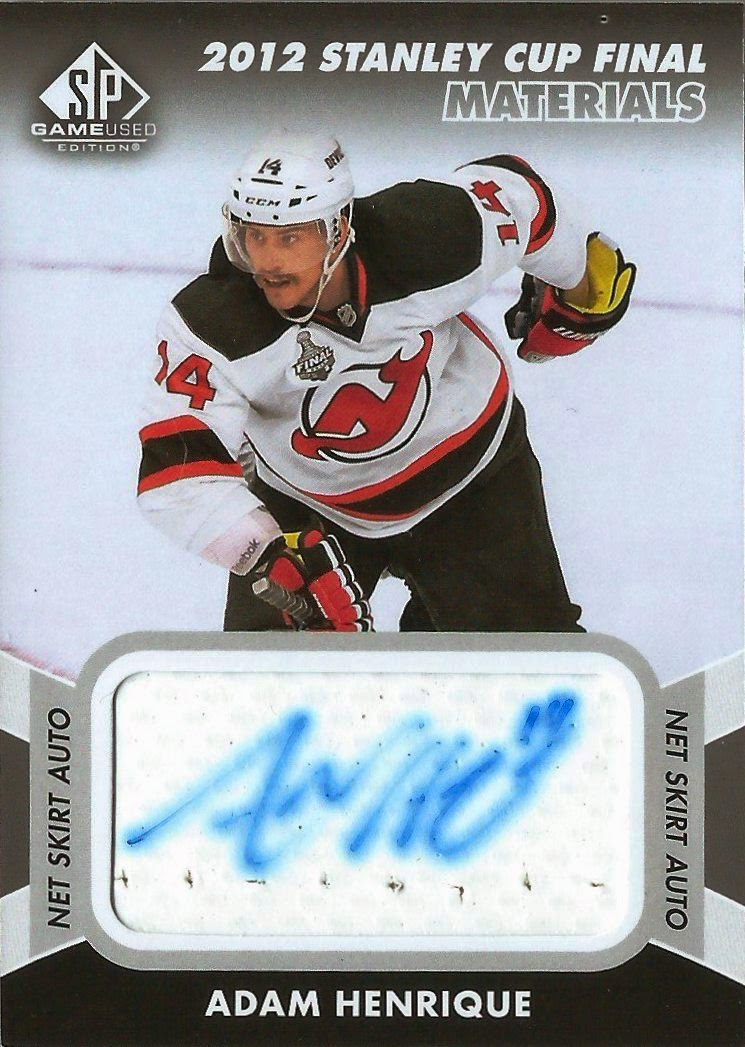 Pretty sharp card if you ask me with a shot from the Stanley Cup Finals which just adds to the coolness. The auto is his typical one but includes his number 14 which is something Adam doesn't always do. One negative however, is the skirt wasn't prepped properly so the auto is a little faded but in the end it doesn't matter that much to me and the fading is likely why it was a steal. But the key thing I wanted was another piece of a Stanley Cup finals net and I have that with a PC auto on it so that is all amazing if you ask me!
Posted by Pro Set Cards at 12:00 PM 2 comments:

I am going to try and get caught up on some posts for my blog as well as some of the others ones I write on in the coming month. With that being said, I have a small week long vacation with the family coming up this weekend so I guess there will be a little gap before I really get going so here are a couple posts on cards I picked up in the last couple months.

First off is an auto I gave up in trade and worked on replacing. My old Stevie Y was from the 09-10 UD Ice Set which was a very nice on card glacial graph. However, I wanted to try and get another because the first one I had I really liked and I felt I might luck into a deal if I didn't mind stickers or ITG.

Well, I managed to spend less on this than I did the last. I also managed to get much for my money, check it out! 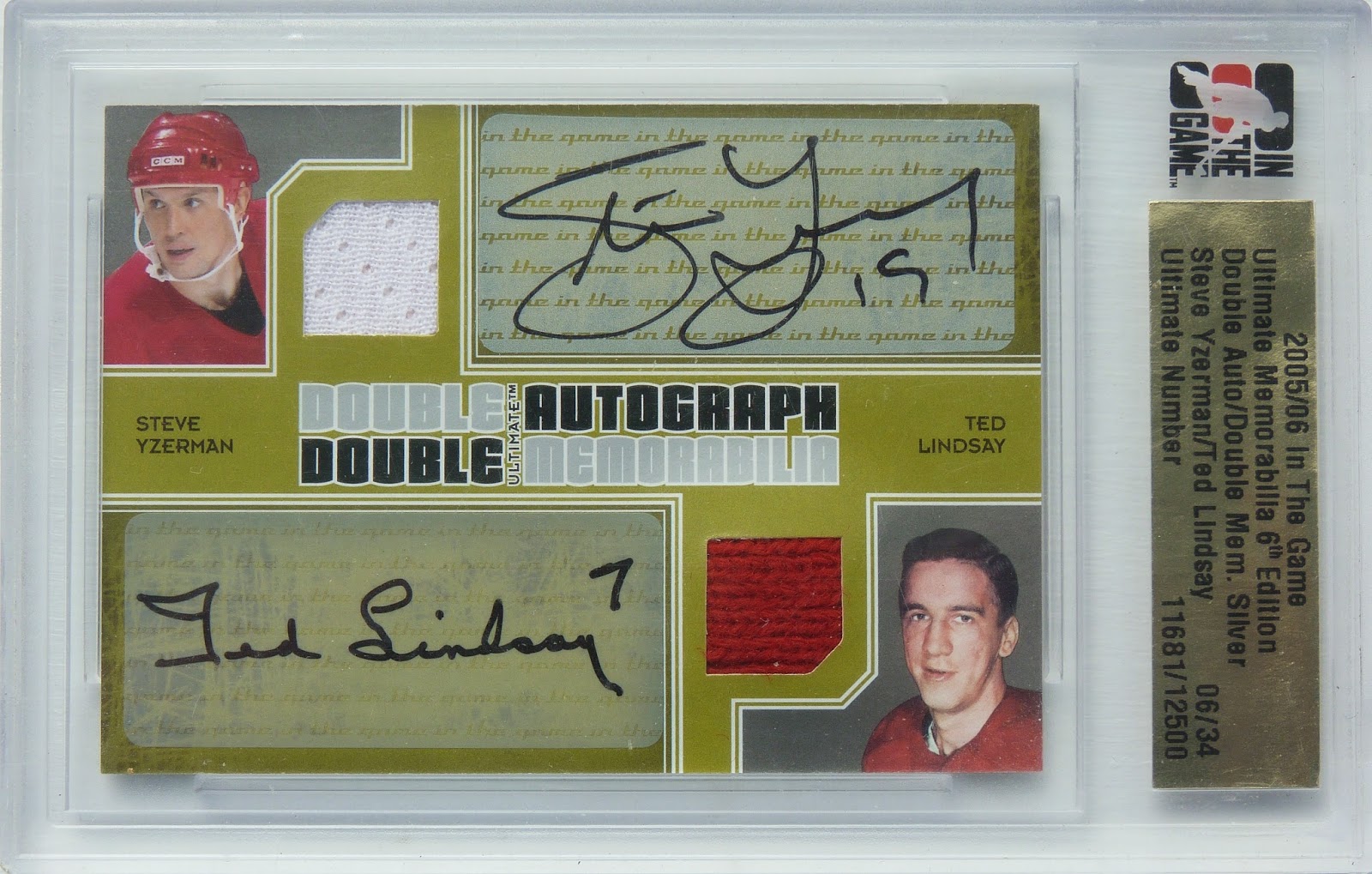 Two HOF'ers for the price of one. Included are game worn swatches from Terrible Ted and Stevie Wonder. I love the bulging piece of "Sweater" you get with Ted Lindsay and the dreaded white swatch from Steve Yzerman actually looks really nice on this card. I was able to land it for less than what I paid for my original and while it has two sticker autos, I really don't card because everything else about this card including scarcity is amazing. 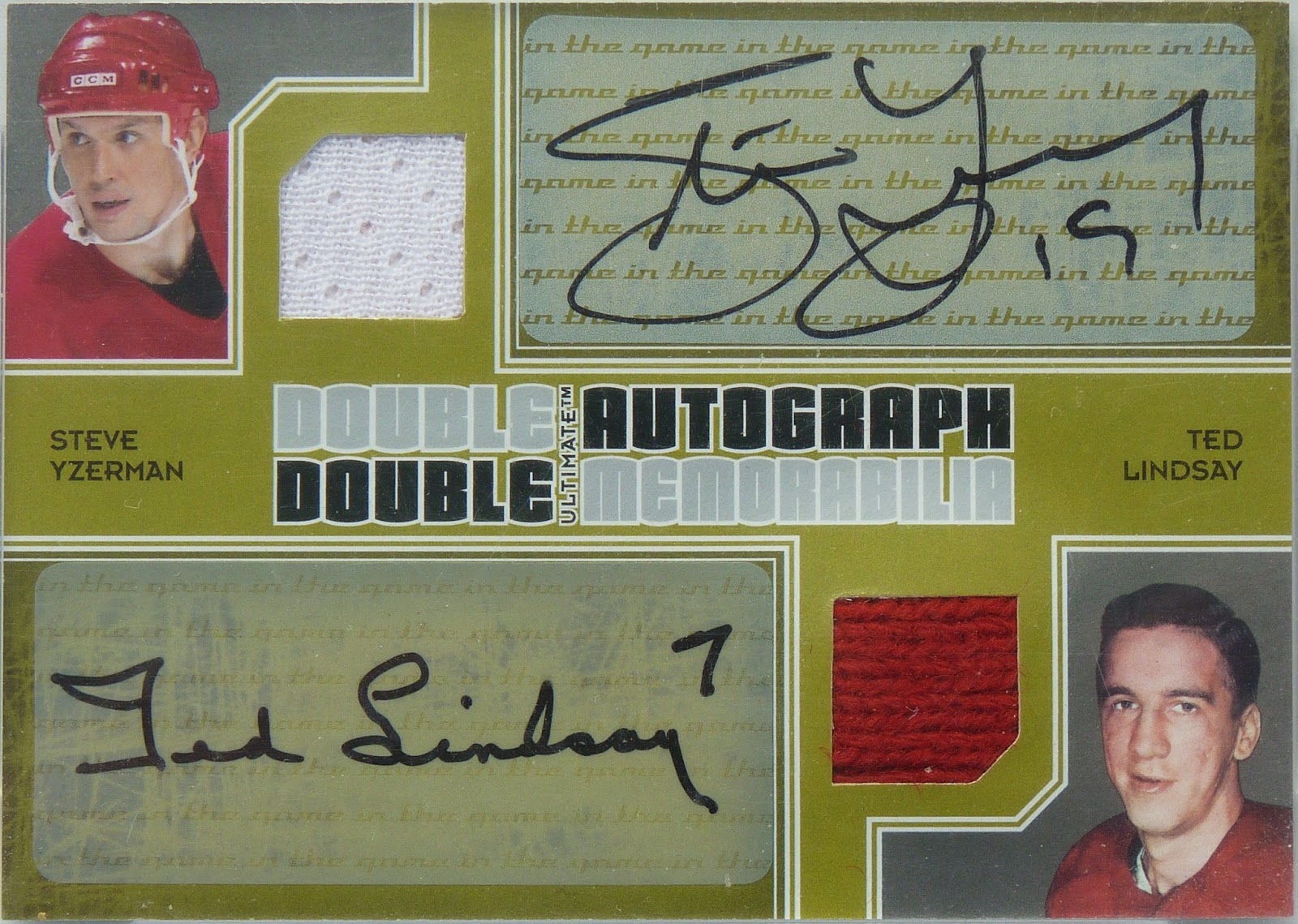 Here is a close up of the card. I sometimes am tempted to crack it out if its coffin but I know that will ruin some value if I ever decide to try and flip it so for the meantime it will stay safe in its case. So with this card I now have a swatch, auto and rookie(s) of Steve Yzerman completing the trifecta of him and I have two of three for Ted Lindsay with the most important rookie missing still.
Posted by Pro Set Cards at 12:00 PM 4 comments: