Growing up in Ontario and living in Canada the Maple Leafs have always been around me in terms of television, media and just general conversation. However given that I am a member of the under 40 years of age demographic, the 1993 season was probably their best year and best chance to win the Cup since I have been alive. What I find neat is when I collect and complete older sets is imagining how different the world was at that time (when the Leafs were on top).

This brings us to Day 3 and Mr. Sid Smith. Sid won three Cups with the Leafs with the last one being in 1951 which was a couple of seasons before this card was printed. If the Conn Smythe Trophy existed back in 1951 Sid would likely have been a finalist. Sid was the Leafs leading goal scorer during that playoff run and finished one goal behind the Rocket who had 8. Max Bentley lead the team in points and playoffs in points with 13 just 3 ahead of Sid Smith.

Sid was a very good player during his time in the league and arguably would make the Hall of Very Good if one existed. He scored 20 or more goals six times in his career and finished in the top 10 in scoring three times. His best season was when they won the Cup in 50-51 when he finished with 30 goals and 51 points. Sid would eventually leave the NHL and move to the Ontario Senior league but before he hung up his skates for good he helped lead Team Canada to a Gold Medal a the 1958 World Hockey Championships were he'd score 9 goals and 14 points in 7 games. 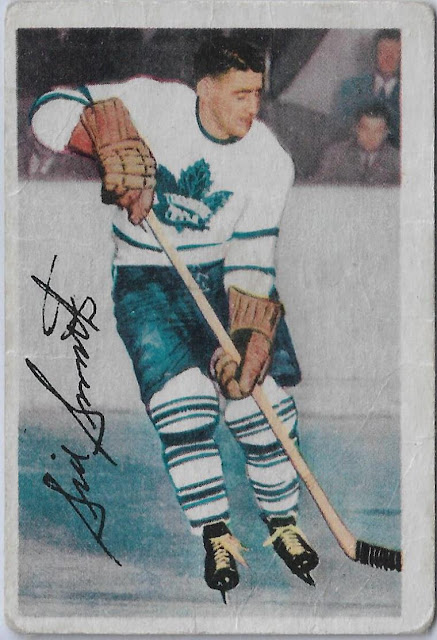 As you can see from the front, the card is a bit worn but what is very great is the colouring on the front still looks like it might have when it emerged from the pack 64 years ago. A few creases and rounded corners indicate it was probably played with a bit before it when into a box somewhere for a long period of time. 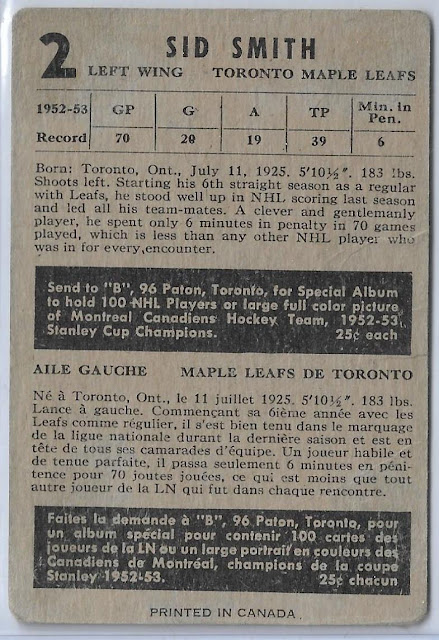 Here's the back side of the card. As you can read he was definitely a contender each season for the Lady Byng and would actually win twice in his career. Sid would also finish in the top five in voting for the award another four times.

Well thanks for stopping by, only a few more to go in this parade before I get a chance to update and share some other cards from my collection.
Posted by Pro Set Cards at 12:00 PM 1 comment:

Next up in the parade is Dave Creighton. Much like one of my heroes Alex Delvecchio, Dave was born in what would be known today as Thunder Bay. Dave would be born on the Port Arthur side rather than the Fort William which means little today but back in the day I am sure there would have been a little rivalry.

Dave had a very respectable NHL career playing in over 600 games over the course of 12 years. His best offensive season was in 57-58 when he scored 52 points in 70 games. Dave would also score 20 goals twice and had over 15 goals in 6 different seasons and finish with 140 goals and 314 points in his career. Dave never won the Stanley Cup but did play for it in 52-53 when the Bruins lost to the Habs 4 games to 1. Dave did have one other accomplishment and that was he was a father to a former NHLer Adam Creighton. 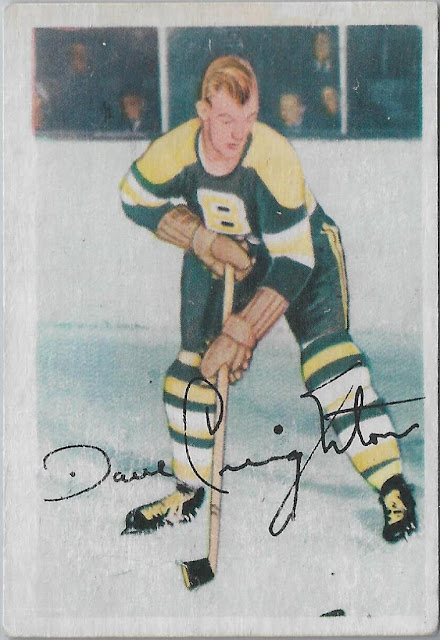 Here is the front side of the card. While Dave had been in the league for a few years, this is only his second NHL card with the first being from the previous 52-53 seasons. This card features a neat action shot where you can almost see the whole puck as it arrives on his stick (or just left his stick). 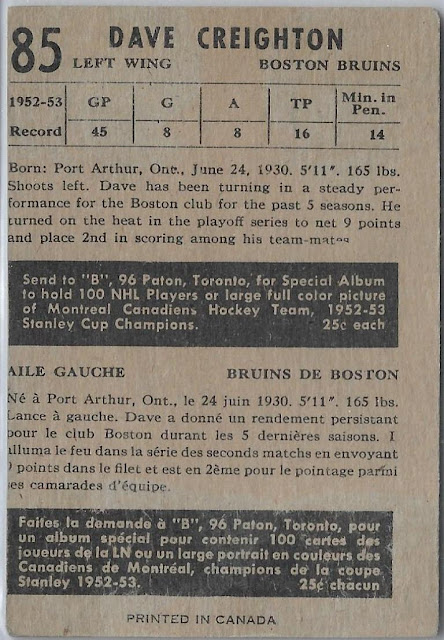 Here is the back side of the card. Much like the front, it has been well loved and handled but still in acceptable shape despite the mis-cut.

Thanks for stopping by and I hope to continue the parade over the next couple days!
Posted by Pro Set Cards at 11:52 AM No comments:

Day two and the parade continues! This time we have a stop in Toronto with card number 8 which features NHL legend and player's advocate Jimmy Thomson. 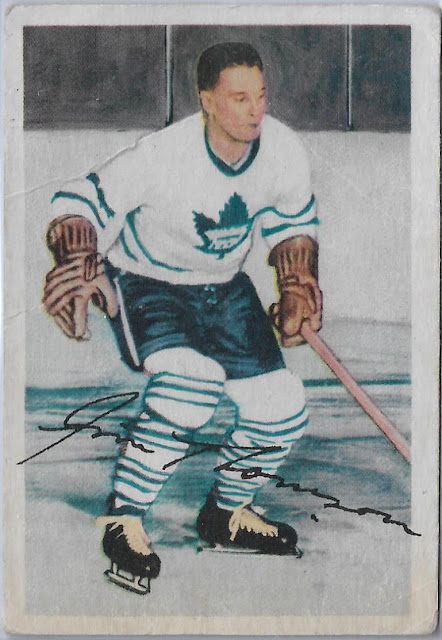 I really like this card for a few reasons. First off like his rookie card, it clearly demonstrates an action photo which was translated into a piece of art. Second of all, look at his face, the detail and concentration also indicate this isn't just a posed shot. 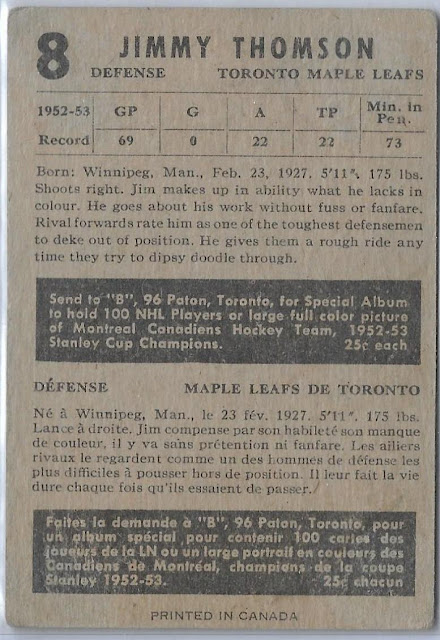 Another thing I love about this card is the write-up on the back. Just take a moment to read through it! I am sure the same thing popped out to you as it did me. In all just a pretty cool piece of NHL cardboard.

Jimmy was an excellent and reliable NHL player who spent 13 seasons in the NHL and from the sounds of things could have played longer if not for some issues with Conn Smythe and Jimmy's desire to start a player's union. During his playing career Jimmy would win the Memorial Cup and 4 Stanley Cups. In addition to these team accomplishments, he would also be named to the NHL second all-star team twice. Sadly Jimmy did pass away back in 1991 but his legacy in the NHLPA will live on in his honour.
Posted by Pro Set Cards at 12:00 PM 1 comment: