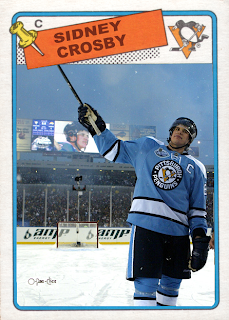 Definitely something I would love to do if I had more time is make my own cards. I used a template for the 88-89 OPC set and I found this nice photo of Crosby online and blammo, he is now a retro card! I always find the hardest part about making your own cards is getting the right font. If you are going to copy a style already in existance you have to make the fonts match in my opinion which can always be tough. I missed the boat a little bit with this card, but I like it anyway.

Some day I would like to try and design my own card from scratch like some of you other bloggers out there...but that I think is something for another day.

Flashback to 2005. Sydney Crosby has moved onto the NHL and the QMJHL is looking for its next big name. Angelo Esposito, a 16 year phenom steps in and scores 98 points in just 57 games including 39 goals. Surely this kid is going to be a superstar. Angelo really couldn't do anything wrong during the regular season, he had Radulov on his wing playing for the Remparts. Radulov put up 21 goals and 55 points in 23 playoff games, but come playoff time Angelo found trouble maintaining that same production. Maybe he was burnt-out from too much hockey that season? After all, including international action he was pushing 100 games and Esposito was only 16 years old.
The following season, Radulov departed and Esposito's number dropped as well, he managed a modest 79 points in 60 games as a 17 year old. Remparts didn't last long in the playoffs, but Espo almost matched his previous season playoff total playing in just 5 games. Then comes the draft and in 2007 he is picked 20th overall by the Penguins, clearly this is a steal for a prospect who was once considered a better prospect than Patrick Kane.
However, as an 18 year old his numbers dropped again. He finished third on the Remparts team in scoring behind players Felix Petit and Kelsey Tessier. Esposito scored 69 points in 56 games that season. Esposito's last successful season came the following year in 08-09 with the Montreal Juniors when he started with 24 goals and 42 points in 35 games. However, a knee injury and subsequent surgery ended that season and it seems that he really has never been the same since.
Over the last two seasons, Esposito has put up 5 points; 1 goal and 4 assists in 24 games. In fact, this season with the Chicago Wolves, he has 1 goal in 11 games. Angelo will turn 22 this February so, it is difficult to say his career is over. However, he definitely has fallen from grace especially considering he was an early favourite to be the number 1 pick in the 2007 draft. I am not sure if he was as great of a player as he was fortunate to have been playing with a talented team at a young age, but, Esposito clearly had enough potential to be selected in the first round and his NHL future really looks to be in doubt. Esposito was apart of the trade that brought Hossa from Atlanta to Pittsburgh and as of today he is still in the Atlanta system which is the good news. If he is ever going to crack the NHL it will likely be with a young and inexperienced team desperate for scorers. The bad news for Angelo is since turning pro, his production has been far from desirable and the AHL may be the highest level of hockey he will ever play. There was a time when I was trying hard to see him as a junior player because I wanted to say I saw him as a 16 year old tearing up the junior leagues much like people still speak of Crosby, Lemieux, Gretzky or even Lafontaine. However, it appears that Angelo may have peaked at 16 and the fall from grace has continued from that point on.
I guess it goes to show that drafting NHL talent is a difficult process and there is no such thing as a "sure thing". While it isn't over for Angelo, it is a long way from the prediction many people had for Esposito. 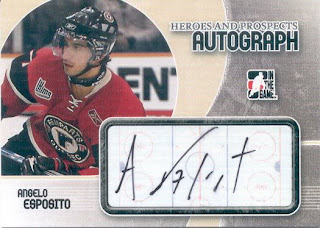 Here is a photo I found of a Heroes and Prospects card from ITG of Angelo Esposito. You can buy this card on ebay for less than $10.00. I wish him all the luck in the future and I hope he can make it to the NHL someday, but I have a feeling he will likely have a similar fate experienced by Kory Kocur another successful junior player who couldn't turn a first round pick into a single NHL game.
Posted by Pro Set Cards at 8:17 PM No comments:

Something I really wanted to do with this blog was to find time to "prospect" the prospects. I like most hockey fans, I have an interest in the young kids and like to make predictions on how their careers will turn out. I have had some hits and some misses. Finally, I will put into print, what I think and possibly make a huge ass of myself in the process. I am not going to always choose the obvious choices like Crosby (I think most knew he would do fine), but at the same time I am not too delusional to think that Jordan Smotherman is going to be a HOF player.
Matt Taormina is the first player I am going to go out on a limb on and I think for good reason. This kid was never drafted and very much reminds me of another undrafted diminutive defenseman with a knack for putting up points.....Brian Rafalski. Matt signed with the Devils last season and then proceeded to tear it up for the Lowell Devils finishing third in team scoring with 50 points. He moves the puck well and though he isn't the strongest defensively he for the most part isn't a liability either. Currently he is a minus 2 on a team that really is playing bad hockey and apart from a minor injury it doesn't appear that he will be leaving the NHL anytime soon. He is smart with the puck and passes it well on the PP. I believe when the Devils get their offensive issues worked out, he may put up about 30 points this season. I think he has much too learn much like Brian did in Europe but give him 2-3 years in the NHL and Matt will easily be a 40-50 point d-man in the NHL and for a kid who was never drafted that is quite an accomplishment. 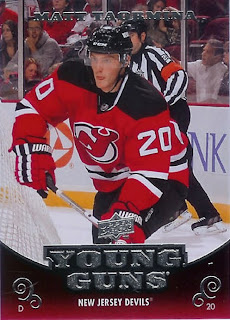 Here is his 10-11 UD Young Gun RC. Currently I do not have any of his cards, but I am always looking, so if you have one to trade let me know and we can try and work out a deal. I see big things for Matt and maybe he could end up as good as Rafalski and should he miss that mark, the very least he will be a quality #3 or 4 defenseman for years to come.
Posted by Pro Set Cards at 11:05 PM No comments:

What do George Sullivan and Benny Woit have in common? Well they were both played in NHL All-Star games. They both have RC's in the 1951-52 Parkhurst set and they both were purchased by me for $13.00 including shipping from Ebay.

Let's start with Benny. He was born in Fort William which joined Port Arthur in 1971 to make Thunder Bay which is where I was born. Benny won 3 Stanley Cups over 7 seasons all with the Red Wings. Benny was an original Dustin Byfuglien in that he was a winger and defenseman. He was a pretty big player for his era standing 5' 11" and weighigng 195 lbs. He only managed 7 career goals and 33 points in 334 games but with 3 cups he was successful in the NHL. After a failed stint with the Blackhawks, he played in the minors for a number of years including a team called the "Jersey Devils". How can I not like him! Hometown boy and mention of the Devils (no affiliation though). 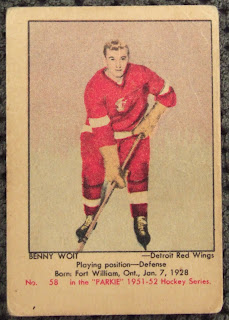 The card itself is #58 in the set and has a couple light creases with some rounded corners. The colouring is excellent.


George "Red" Sullivan was a centre who played in Boston, Chicago and New York (Rangers). Sullivan was a left handed shooter and was 5' 11" just like Benny and was 155lbs or 40 lbs less than Benny. Offensively Sullivan was a little more prolific than Woit in the scoring department with 107 career NHL goals and 346 points in 557 games. One of his best seasons was with the Hawks when he put up 61 points in 70 games and lead the 54-55 Hawks in scoring. Red would top that amount with 63 points and was second in Ranger scoring in 58-59. Red never managed to win a Cup and was most famous for being nearly killed by Doug Harvey. A priest was apparently brought in to read him his last rites and somehow managed to pull through. He would stay in hockey and was the first coach in Penguins history and found himself coaching in 74-75 for the Washington Capitals (worst coaching position ever) and was 2-17 with the Caps in that season. 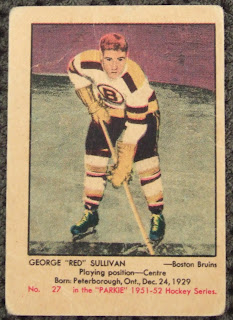 The card like Woit has been weathered! There are some light creases and the corners are rounded as well. The colouring is excellent on this card as well. In all I didn't spend much for these cards and they do get me closer to completion.
Progress:
Card #27 and 58 and 2+3 of 105 for my set.
Percent Completion:
2.86%
Cost of Cards:
$13.00
Total Cost of the Set to Date:
$20.95

Posted by Pro Set Cards at 2:46 PM No comments: