Wow, it's been ages since I have done some back checking, so here is one that hopefully will make you smile like it did for me!

About a year ago I was at the LCS and I found a box of 93-94 Upper Deck Series 1 and 2 there for 10 dollars a piece. Given I didn't ever complete either of these sets I decided it would be fun to buy them and break them.

The set as a whole is much like early Upper Deck sets, very well designed, good photography and a backside which featured a second photo and all the necessary stats and vitals. 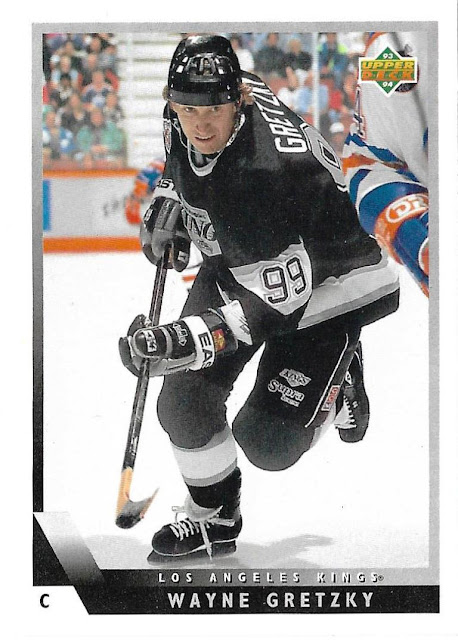 Here is a good example. Great colour scheme and a fantastic action shot of the Great One. 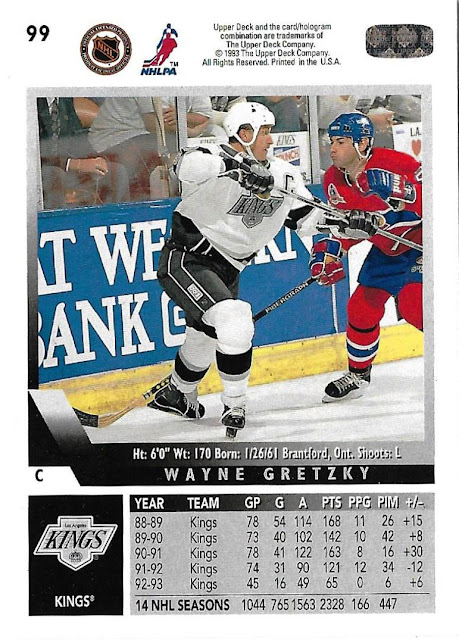 Here is the back side. A different game, same Wayne and all the stats for the past 5 years as well as career totals. Sadly one of those seasons is not like the other and we can all thank Gary Suter for that one. 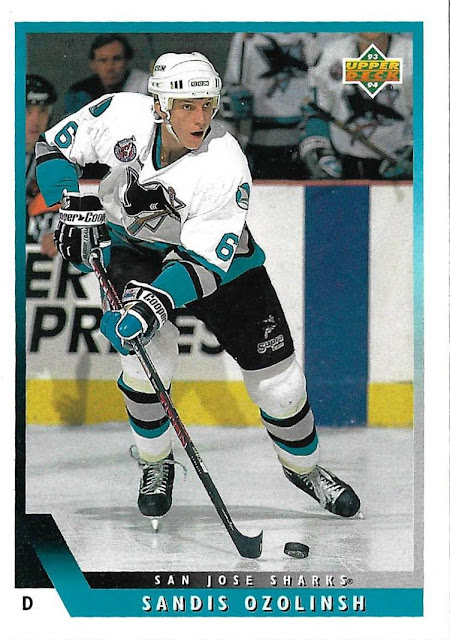 Much like the Gretzky, a pretty cool action shot here. Carrying the puck with his heads up and players behind him are on their feet! Then you flip the card over and I am honestly at a loss for words on this one: 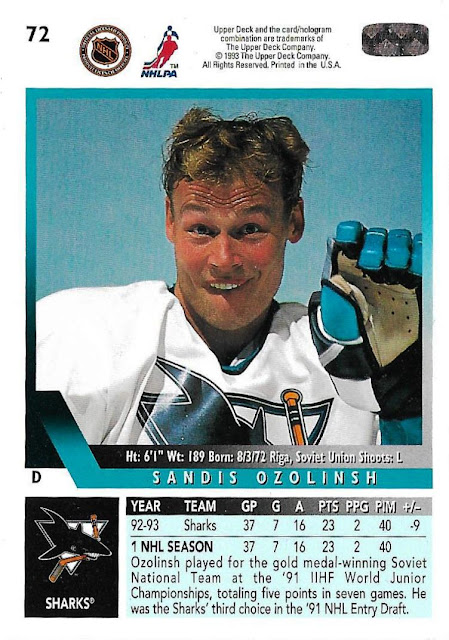 Is that Ace Ventura?

Or perhaps it is his impersonation of SJ Sharkie? Either way, when I saw this side of the card I must admit it made me laugh and even now it's still funny and maybe one of the most memorable card backs I have ever come across. I do comment Upper Deck and Sandis on their creativity and while I must say my first thought was WTF, it's actually a fun card and collecting should be all about fun! What are your thoughts? Is this card a winner or a loser for you? Do you have any card backs that stand out as memorable to you?

Thanks for stopping by!

When Anthony Duclair was drafted in 2013 in the 3rd round by the New York Rangers, they were getting a forward who was a bit on the smallish size but had plenty of speed and potential. In the 14-15 season they gave him a 18 game test drive before sending him back to junior where he tore it up. Then the Rangers saw a chance to land Keith Yandle and that would end up costing them plenty including Mr. Duclair.

2015-16 was an exciting time in the desert as Domi and Duclair showed a great deal of chemistry and Anthony put up a great rookie season which saw him score 20 and add another 24 assists which was exactly what the Yotes were hoping for when they landed him. However, the next two plus seasons have been a disaster and Duclair even spent some time in the AHL. Since that great season, Duclair has played 121 games between the NHL and AHL and has only manged a combined total of 17 goals and 43 points. Truly much left to be desired.

Things got so bad he demanded a trade and he got his wishes. Dealt with Clendening to the Blackhawks in exchange for Panik and Laurent. Interestingly enough, Dauphin Laurent went in the same draft as Duclair, just a round sooner. Since the trade Duclair has played 14 games as has had 2 goals and 3 assists for 5 points. Not exactly lighting it up but I have watched a few of those games and he has looked great at times. It just seems he is missing that swagger and confidence he had in his rookie season with the Coyotes.

So with the Hawks season all but over, they will be faced with a tough choice. Do they resign Duclair who is an RFA and hasn't shown a great deal of productivity in his limited time with the club or do they ship him off at the deadline or in the off season? There is no way I see him walking at the end of the year and at the very least I can see the Hawks resigning him at his current price of 1.2 million a year and he will get another chance to showcase what he can do and try and parlay that into a good contract once he hits his prime. Duclair is still a kid and won't even turn 23 until the end of the summer so there is lots of time to grow and develop. Time will tell who gives him that chance!

A couple of years ago I bought a couple packs of 14-15 Trilogy and hit a couple Duclairs. 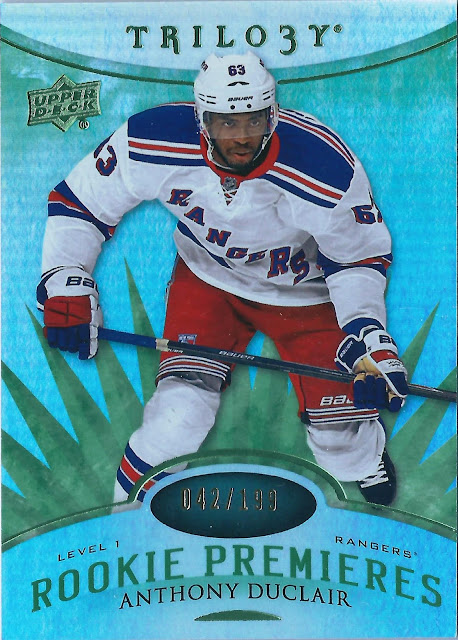 Loves me the Rookie Premieres! Not sure if its the foil board or just the affordability on the secondary market but either way I felt hitting this was a win. 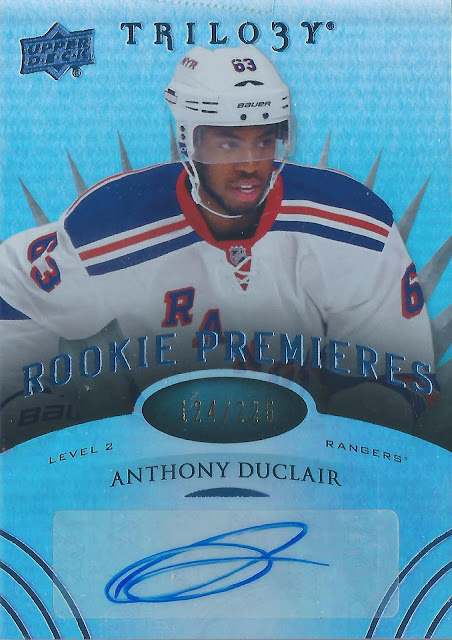 This one I hit as a redemption. I must say when it arrived I felt there was much left to be desired in that signature! Still in the end it was a fun hit because I already had it's non-auto match and they pair sit pretty well together in the collection.

Duclair has loads of potential and I think in time we might see that potential come back to the surface and someone will have a great second line winger. He tore it up at the 2015 WJHC scoring 4 goals, 8 points in 7 games while helping lead Canada to gold so he will always have me in his corner. I just hope that he's able to do it before the NHL clubs give up on him and he will be over seas finding his game a little too late like Linden Vey or Nigel Dawes.

Last summer I picked up a couple boxes of retail hockey. Two 09-10 and one 14-15. The 14-15 was epic-ally awful. So bad I didn't want to spend any time scanning the cards to share them let alone rehash the experience. The one 09-10 was equally bad. Thankfully there was gone good box in the lot and I will share some of those with you wonderful folks today. If it had been the only box, then I would have called it a success. Sadly it needs to carry the weight of its crappy brethren so that in itself also diminishes the success here.

Without further ado, the top 4 Guns out of 6 I got and one game used card. 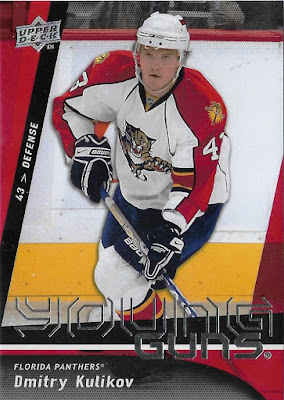 First up is Dmitry Kulikov. Kulikov is a pretty steady defenseman who currently is apart of a pretty solid blue line group in Winnipeg. Having grown up in Lipetsk, I am sure living in Winnipeg isn't as painful as some seem to find it given they get cold weather on occasion in that part of Russia. 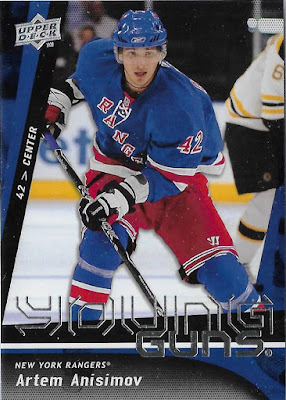 Artem hit a milestone this week scoring his 300th career point. It took him 600 games which is pretty decent, at that pace he'd be good for 41 points in an 82 game season. Playing 82 games in a season has been a challenge for Artem given he hasn't reached that total in the past 7 seasons. Still, he's a very dynamic player and can often surprise defenders with a great move or a superb pass. 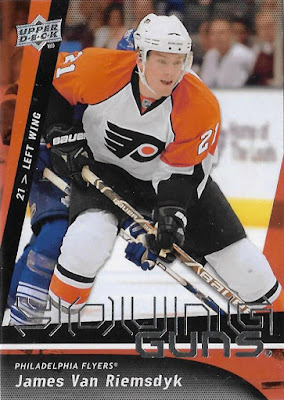 Oh boy, back in 2009 this was a pretty coveted card. Second overall pick, loads of talent and potential and the sky was the limit. James in now in his 9th season, he's managed some great numbers including a career high in goals of 30 and he's cracked 60 points twice. This year he's on pace for 32 goals and 49 points. However, if we were to look at the 2007 draft class as a whole, he'd likely still be a first rounder but guys selected behind him (Voracek, Couture, Shattenkirk, Pacioretty, Subban, Simmonds, and Benn) may all get some consideration before JVR. With that being said, given the 50 Young Gun cards I could have hit, this is one of the better ones. 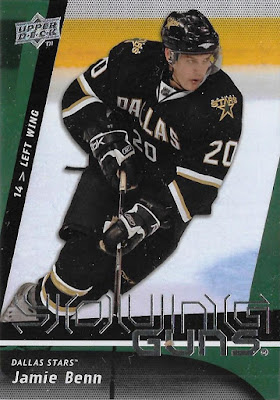 The biggest hit of the box without a doubt is this one. Jamie was a 5th round steal for the Dallas Stars and as of today, ranks second in points from those selected in 2007 with 569 just behind Patrick Kane (805). Jamie has scored 20 goals or more in every season he's played except the lockout year and this season is on pace for 30 goals and 75 points. He's definitely an elite talent and this was one YG I was missing from my collection so in all a very nice hit. 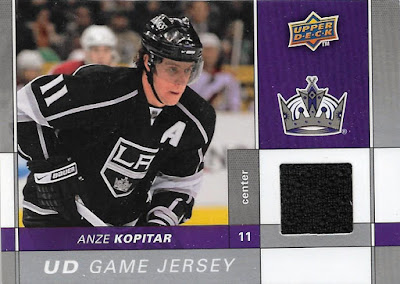 All retail boxes back then came with a single game used card and I think I did pretty well with Anze Kopitar!

So there you have it, been a while since I shared a box break but given how bad my luck has been in this department, you can probably understand how I didn't want to use up too much of my limited blogging time on some pretty spectacularly awful boxes. This was definitely a success but far from my best too.

How about yourselves? Any box luck lately?

Is it time for a Pul Party in Edmonton?

Well, a few months ago my neighbour was in Las Vegas and he asked me if I wanted to lay some money down on an NHL team. At the time, odds were pretty bleak on Devils and Knights so being a casual Oilers fan I asked him to lay down a sawbuck on the Oil.

Damn, that was 10 dollars wasted. While I haven't given up complete hope, the team has struggled and I am not entirely sure what it would take to fix that club right now. McDavid is doing all he can do but the Robin to his Batman, Draisaitl, really hasn't dominated like I had expected he might and their goaltending has been down right awful. When you factor in the RNH injury and Lucic playing like he's 35 years old, someone will need to step up and make a difference in the second half if this team plans on making the post-season for a second consecutive year.

Jesse Puljujarvi has struggled again this season with Oilers and currently has 9 goals and 15 points in 34 games but of late has shown some flashes of skill and talent which had made him a player who was in the same conversation as Patrik Laine. I hope that someday he is able to find his game here in North America much like Leon Draisaitl did last season and when/if he does the Oilers should hopefully at least offer a little more offensive punch which in turn should alleviate some stress off the back end. 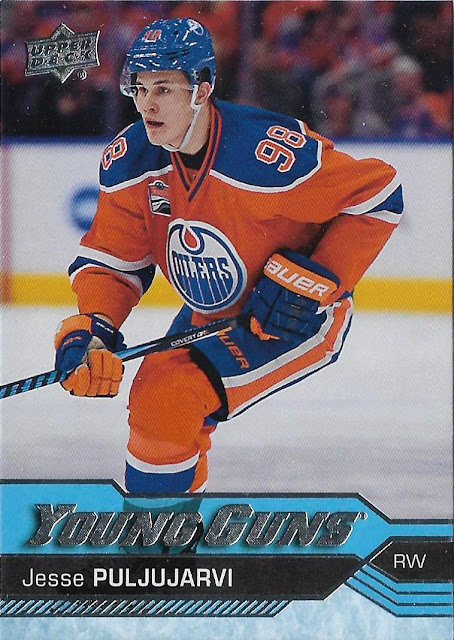 Could be a good time to pick one of these up while they are still on the cheap because if he does take off much like Leon did, you could find yourself paying a 5-6x premium in a year or two. With that being said, I don't know much about the Oilers chances for making the playoffs other than SportsClubStats has them listed at 0.8% as of last night and Cam Talbot made a guarantee that they would make it. If Cam is going to be correct, McDavid will need to carry much of the load, Cam will need to improve his puck stopping and secondary scoring will need to come from players like Lucic and Puljujarvi to help overcome those odds!

What are your thoughts? Oilers dead in the water? How are things looking for your club with 30 games to go? Thanks for stopping by!
Posted by Pro Set Cards at 10:37 AM 31 comments: