A Homemade Hobby 6 Pack For About The Price Of One

This batch I bought so long ago (1.5 years ago) that I almost forgot I didn't even share it. It was around my birthday two years ago I was doing some looking and one of the online/in-store dealers near my place had a batch up on eBay. He always posts like 400 cards and lets them ride on auctions and then a month later he will be back with a new batch. The cards are always decent and he is very accurate with his descriptions for quality purposes so I really trust him. He has a pile up starting at 99 cents and free combined shipping meant deals could be had. Alas when the dust settled I ended up with this 6 and the price was very nice and well under a blaster. 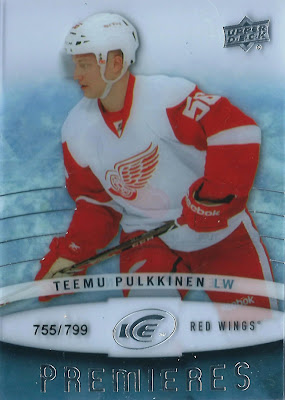 I am not sure if Teemu will be a bust or a late bloomer but he's now 25 years old and currently in the AHL with the Wild owning his rights. He was an AHL superstar but his big league game hasn't made an appearance yet. I figure one more season to crack the line-up otherwise he will likely bolt overseas. I'm hopeful still but realistic too. 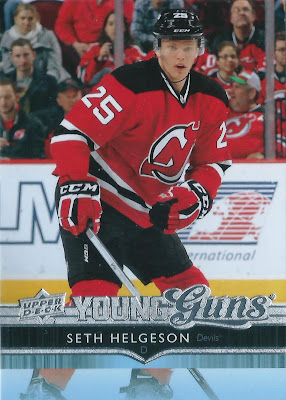 So far Seth has been a bit of a cusp player for the Devils. I like to say he's our 8th defenseman really. Good enough some nights to be a 5-6th but inconsistent which makes him an easy scratch target. He is pretty reliable in the AHL and given he's 26 he too will need to prove his worth soon as the Devils are loading up on young d-man prospects or he could be searching for a new organization as well. 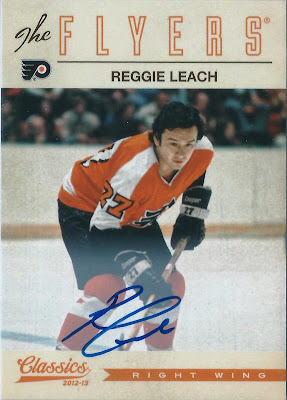 The first big name in the lot, Reggie Leach was a big force in the 70's with the Flyers winning two Cups with the Broad Street Bullies. Reggie scored 61 goals one season and then backed it up with an NHL record 19 post-season goals. Despite some impressive years and accomplishments, Reggie likely won't be a HOF'er ever but if there was a Hall of Very Good, I believe he would be a first ballot inductee. 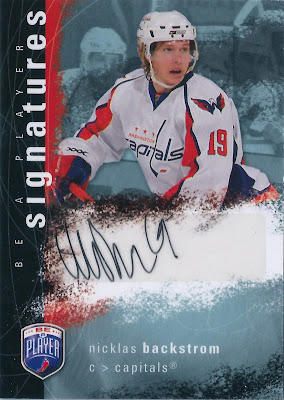 This was the one I was most excited about because it is a rookie year auto of a player I love watching and believe is greatly underrated. Nick is off to another great season with his production spiking of late. As of today, he sits tied for 4th in points with 63 and second in assists with 45. 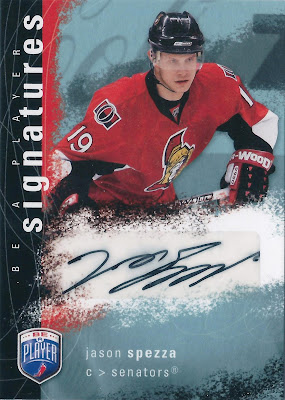 Ages ago I wrote Spezza and never heard from or got my card back. These things happen but that didn't mean I didn't want his auto anymore. When this was was up for bids, I threw a bid that would cover two way postage and thankfully it was enough and righted a wrong! Spezza seemed to hit a wall in Ottawa and has since been revitalized in Dallas. This past year has been a tough one in the Lone Star State but Spezza is young enough that he could be a good trade deadline pick up or have another go next season after Dallas does something about their goaltending. 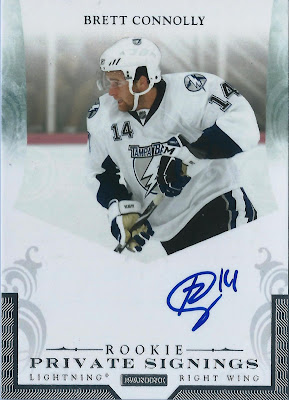 The last was a fun one for the PC and that is this nice on-card auto from Brett Connolly. Brett has been playing well of late and making a bit of a push to be in Cy Young contention. After pretty soft start and a few nights of being scratched Brett had a pretty solid point streak going (6 games) and currently has 12 goals and 6 assists for 18 points. He is on pace to 18 goals and with a little luck that could be 20. As it stands right now he has tied his career high for goals so the next one will be a big one.
Posted by Pro Set Cards at 4:00 PM 4 comments:

As little as a year ago, Oilers fans were dumped hardcore on one of the most sought after college free agents from 2012. It turns out he just needed a new focus and a new scene and this season he has had a resurgence in his career and is on track to have his best season ever. True it doesn't hurt to have the forward crew that he has to work with and you or I could rack up a few points being Crosby's D-man but only 52 games into this season, he has at a career high for points already and will likely eclipse his goal high of 11 before the season closes too. The best stat though is his +/- which leads the team at a +29 and is good enough for 5th in the NHL as of Feb 9. While a Norris might be a stretch for Justin given his competition (Brent Burns), this is turning into a great story and one I hope continues to be successful for Justin Schultz. 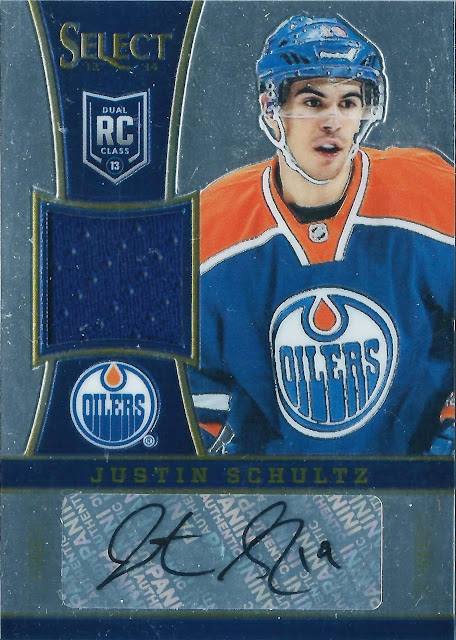 I'm both a fan of Justin Schultz and the 13-14 Select set so you get the best of both worlds with this card. A nice jersey swatch and autograph. I do have a couple more Schulz auto but I will save those for another day. Thanks for stopping by!
Posted by Pro Set Cards at 1:55 PM 2 comments: