Will Gerard Gallant Ever Get Respect?

I think it is safe to say the answer to my question is yes when he hoists this year's Jack Adams Trophy as best coach. However, this has been a long time coming if you ask me and the number of times he's be slighted or over looked will probably make this seem that much more sweet too.

Even the hobby world hasn't been the kindest to poor Gerard. Let's look at his rookie card. 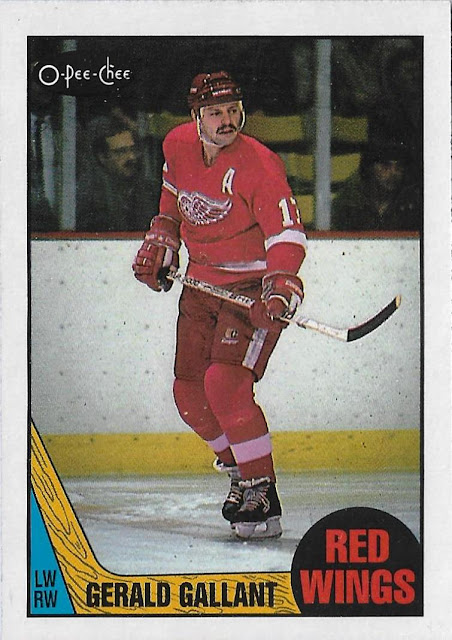 Well for starters Gerard apparently goes by Gerald for this particular season, I am sure it was a pretty simple misunderstanding given Gerald is likely a more common name than Gerard. Still its never nice to have your first hockey card ever with the wrong name on the front. 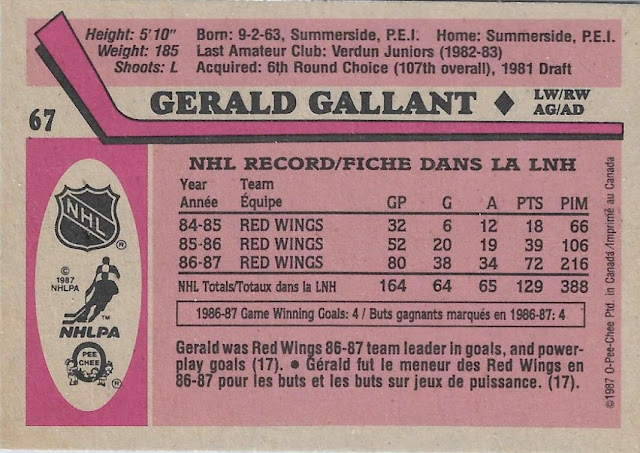 When you flip it over there is more insult to injury. OPC/Topps consistently write his name as Gerald on the back too. Then you look to see it wasn't even his first NHL season. It took three years for Gerard to get a rookie card and in all fairness he put up some decent numbers in some of those seasons. Again, no respect for Gerard.

Once upon a time the 87-88 OPC set was a must have for all collectors. It was loaded with pretty talented and highly priced rookies and second year cards. Some of the notables were Luc Robitaille, Adam Oates, Ron Hextall, Mike Vernon and many many others. Patrick Roy's second year card also has a great deal of collector's attention and the book price was nearly 200 in the early 90's. Today the set can be had for about half that price and many of those rookies came down to earth thanks to the internet making transactions easier and cards more available and a decrease in demand. Still during all that time a Gerard Gallant rookie could be had for a handful of nickels. Gallant would go on and have a decent NHL career scoring 30+ goals 4 times and 200+ penalty min in those seasons which is a feat few have accomplished. A bad back would force him out of hockey until he'd come back as a coach.

Gerard would win two QMJHL championships as the coach of the Sea Dogs and then he would come to the NHL and get the Panthers back in the playoffs. After a rough start the Panthers gave up on poor Gerard and made some other strange strange from office moves. Then came along the Vegas Golden Knights. I almost think the lack of respect poor Gerard has had over the years made him a perfect choice to run the Island of Misfit Toys because this year has been like none other and I believe they could very well make it out of the first round in the playoffs. Regardless of what happens I believe Gallant is a huge factor and maybe a Jack Adams will help get some of that respect and people will know the name Gerard and not Gerald for good!

Despite this season's successes, you can still land a Gallant rc for a great deal. Currently the book price on Gallant is about $1.00 compared to Ulf Samuelsson's rookie from the same set which books for $6.00! Which of those would you rather in your collection or running your team?

Thanks for stopping by!
Posted by Pro Set Cards at 8:49 AM 3 comments: