State of the Union

Hey all, who knew as you got older the less time you'd have to blog about sports cards? Truth is I still think about them as much as ever and sneak time here and there to tweet about them but apart from that really the blog seems to have suffered the most. Life is good, coaching hockey, playing hockey and soccer, parenting and working all seem to flow together and in the end I daydream of cards I own or cards I wish I had and then the next day begins.

I still feel a little empty because I don't seem to have as much time as I'd like to record my thoughts or interact with some of my fellow collectors I only see on here so I am working at ways to try and spread my time a little more evenly to help include my comrades out here.

Today's post is how I stay connected to the hobby when  I am not at home and one way is by having a few cards at work. For someone who has 99.999% hockey in their collection, I have a large number (proportionally speaking) of baseball cards at work. I thought I'd share a few of the ball cards I have and share some of the others in another post at a later date. As some of you know, my all-time favourite ball player is Randy Johnson and at home I have his UD rookie and an Artifacts relic card. However at work I have a few other RJ Rookies which include: 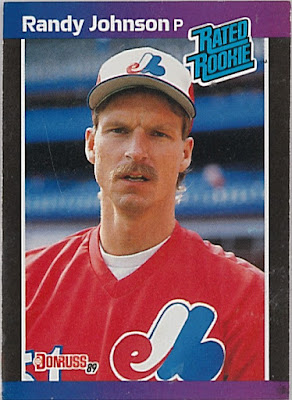 While Randy looks angry or annoyed, I do like this card in terms of design and colouring. Perhaps the most visually appealing of the three I am sharing today. 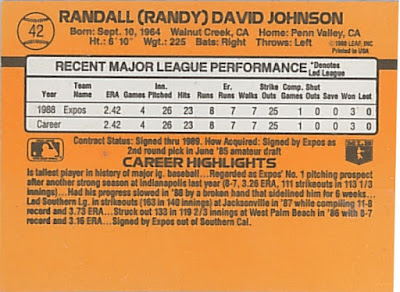 What the card had going on the front didn't carry over to the back. Here is your standard Donruss backs this time in orange. I don't know loads about Donruss but it appears the back sides of their cards were pretty much the same year in and year out for a number of years. 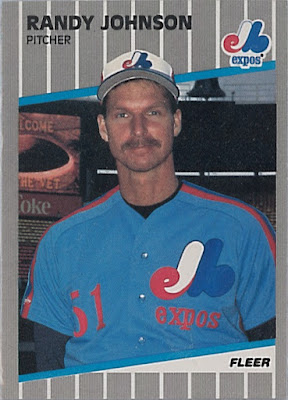 Here is happy Randy. This card exists in a few different variations depending on how much Marlboro one could see. I believe this is the most common version and thus worth the least. Still like the design of the front and it comes in a close second. 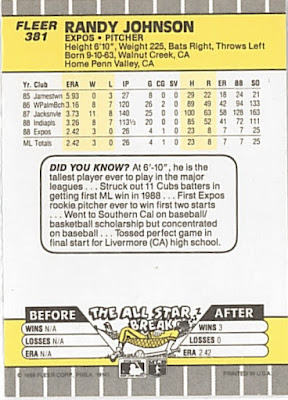 The backside is a mixed bag for me. I don't care of the design so much but it is probably the most informative backside of the three rookies. 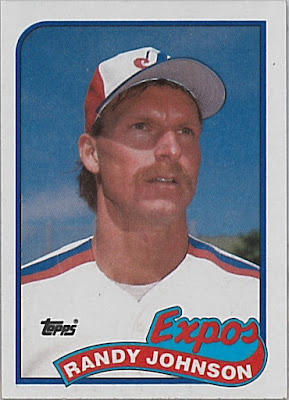 This is thoughtful Randy. This card is pretty much as vanilla as 80's cardboard comes in my opinion. However, it seems to have a nice vintage look to it now but I imagine back in 1989 it had fewer fans than it might have now. I believe the same can be said for Bowman and OPC when it comes to hockey from roughly the same time period. 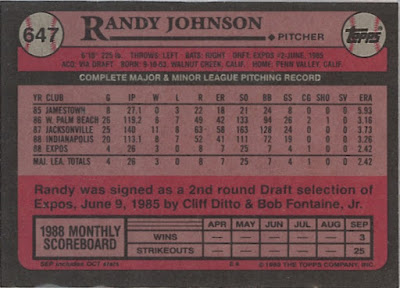 The backside was a bit of a surprise. A little more life back here and the black border is a neat touch. I do like the back of this card much more than the front.

So there are three cards I keep around my desk at work. I've probably looked at them all a hundred times and still give them a glance every now and again. I picked them all up in a lot deal on eBay probably 4-5 years ago and they've lived at work the entire time. I like that they are only at work and it makes them kind of unique in the sense that it's the only place I get to see them. I also like I only have a few cards at work so the ones that are here tend to get a fair bit of my personal attention. Strange? Yeah probably but that adjective probably has been applied to me on a number of occasions but I am willing to bet if you are reading this you probably might have a few cards stashed away or on display at your place of employment too. Am I right? Do you have any special work only cardboard that you have for the occasional mental break? If so, I'd love to hear about it. In the meantime, thanks for stopping by and I appreciate your patience with this blog!