I almost never trade vintage for modern cards. Not that I have anything against modern cards because I am one of those rare collectors who do BOTH. But because I always trade vintage with a little more respect because I find modern cards are starting to really blend together. After from a rookie, how many patch autos do I really need of the same player? What is the difference between a swatch from a player's third year and their 9th year? So as a result this trade might seem a little unusual for me, but it was one I couldn't pass up! 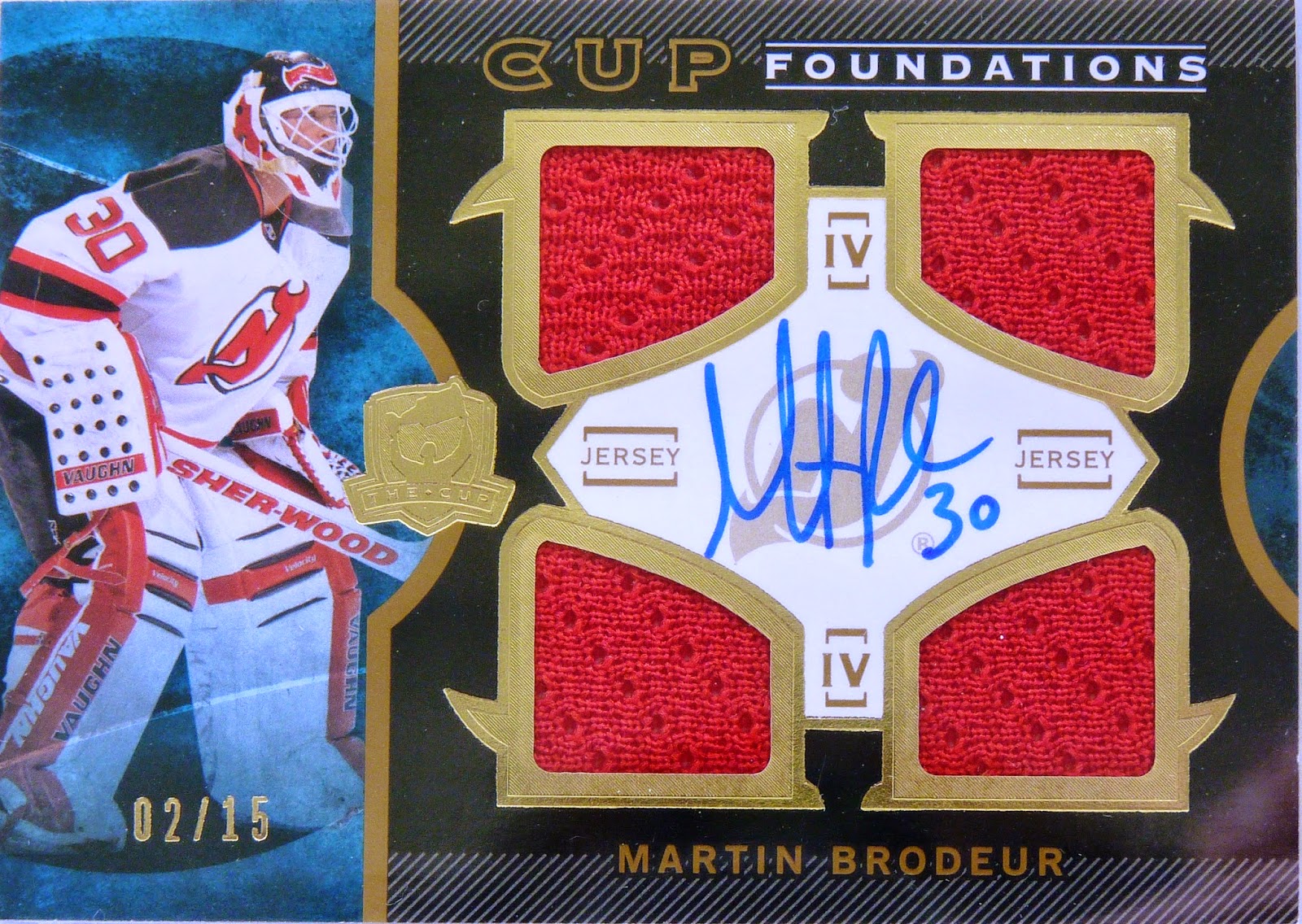 My collection has taken a beating lately with many cards going out the window to collectors for other cards. This trade was a simple 1 for 1. Out was my 86/87 Topps Patrick Roy rookie which was in such amazing shape I have long considered grading it because it was at least a 9 in my books. But, in comes one of a million Marty autos but one that is relatively low in a print run, features nice swatches and is an on-card auto. This is my third Marty auto and I think it is fantastic. Colours are sharp and bright and the signature is positioned very well. I do not regret the trade but I was sad to see my second Roy rookie disappear. Some day, I will get another one back and half the fun in the chase to find it.
Posted by Pro Set Cards at 9:44 AM 3 comments:

Sad to hear today about the passing of a great Team Canada Coach. I didn't care for Pat much during his Leafs days but I think that mostly had to do more with the team and less with him. But in 2002 he put Marty in goal and the rest was history and he won me over. He would go on to win a few more Team Canada gold and cement himself as a winner. I bought his rookie a few months back and I will need to add it to this post later. But in the meantime, I will appreciate this autograph that much more. 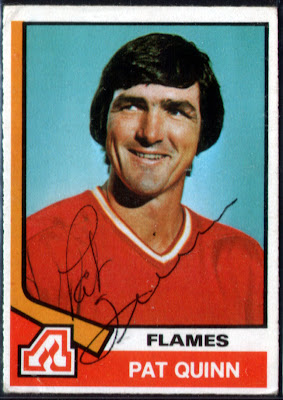 Posted by Pro Set Cards at 2:54 PM No comments:

Patience is something I always talk about during my posts and here is yet another case. I probably have been on the title card a dozen times over the last 7 years and never won one. I never sure about the condition, or the price was too high or I didn't have enough in the budget to bundle it with something else.

A while back I stopped off at my LCS and had a small pile of change I didn't really have ear-marked for much so I went in looking for cheap deals. Sure enough Wayne was in the display case with a very very fair price on it. So after chatting with the boys for a bit I asked if they could do a better deal on Wayne (almost feeling guilty but not quite). Sure enough they slashed the price in half and I said sold! 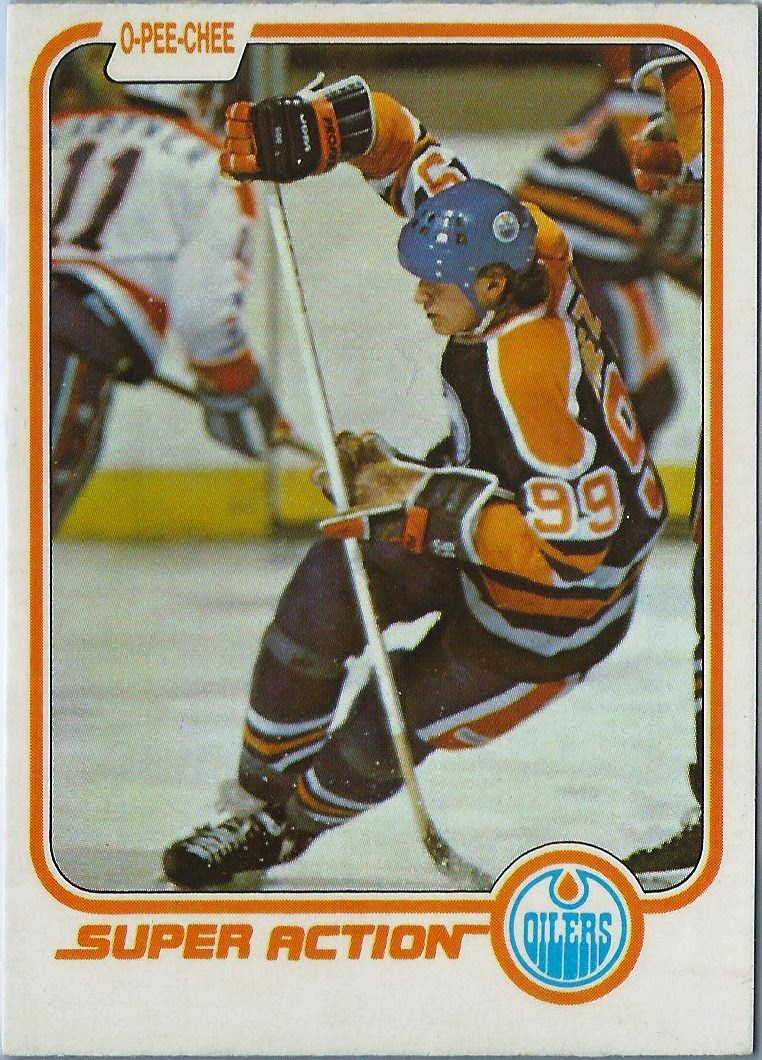 Rather than go over the things I love about 81/82 OPC/Topps for the 50th time, I am instead going to just focus on this card. For starters you get a cool design with an all action shot of Wayne Gretzky. See that blurry white jersey in the background? Yet another photobomb by Mike Gartner! The backsides of these cards are very well utilized and they give you a different look at a players career rather than the usual regular season stats. 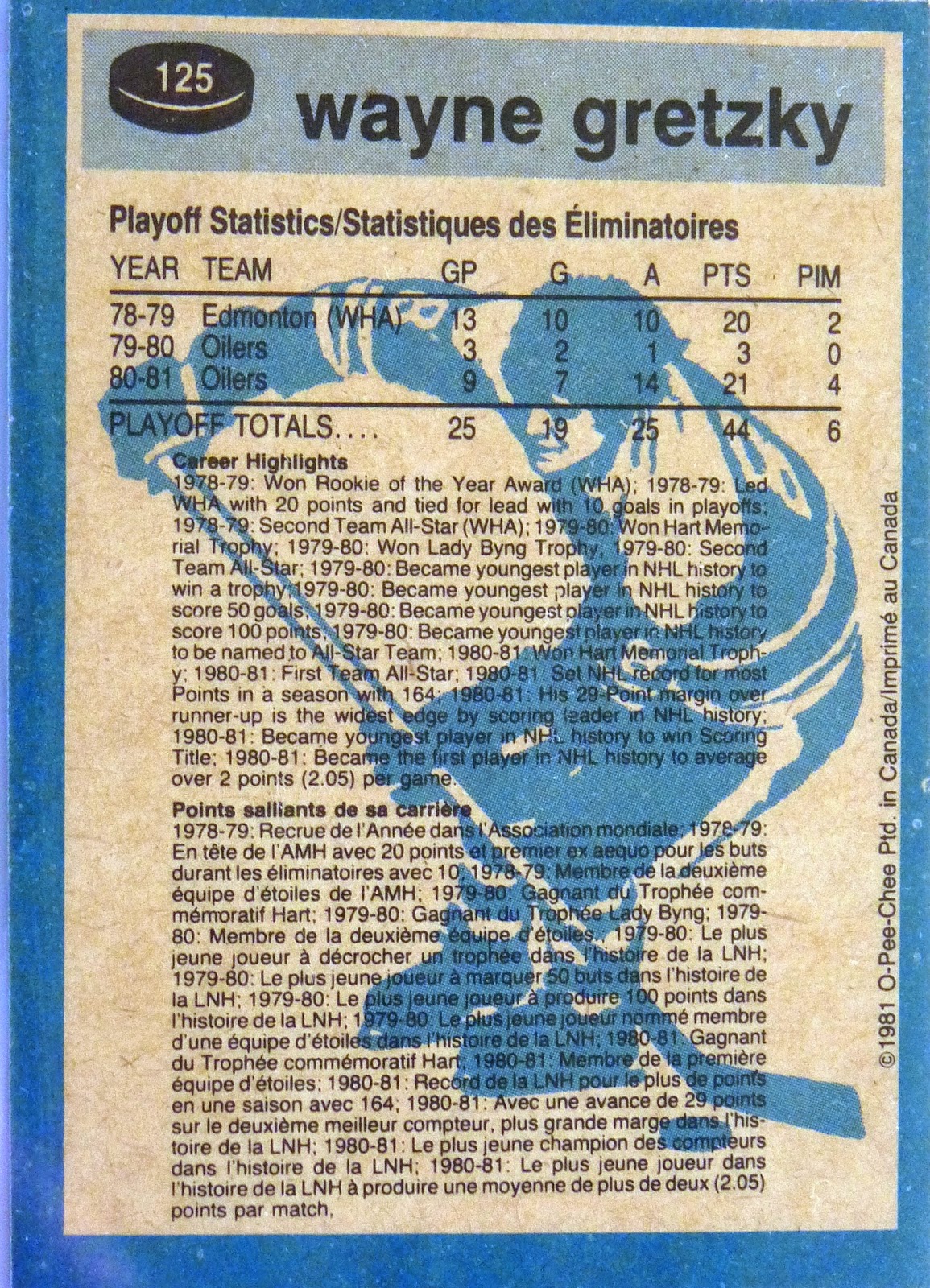 Here is the back side and please excuse the "scan". I have a new desktop and I have been pretty slow at installing software and peripherals so as a result no scanner and no good software to prep the pictures for show. I instead left it in its toploader and took a photo with my camera. But I still think you can catch the gist of what I am saying.

Love the big player in the background and the fact the card is focused entirely on playoff performance and highlights. When Wayne was just a kid he tore up the WHA playoffs, 10 goals, 10 assists in just 13 games in insane. How about 21 points in 9 games? Check out those highlights, I am sensing a theme.

A couple neat facts, Wayne Gretzky was the WHA Rookie of the Year in 1979 as you can plainly see, but he could have easily won the Playoff MVP too as he lead the WHA playoffs in Goals and Points. Wayne's 21 points in 9 games gave him the highest points per game average in the playoffs and given Edmonton only scored 35 the entire playoff means he was directly responsible for 60% of all their goals.

Some day I just need to bit the bullet and get a complete OPC set from 81/82! After I get through the 20 or so posts I have in my mind, I am going to try and do a post about my favourite 10 Gretzky cards. Hopefully I will get there some day.

It seems sometimes when I get a bit of steam going on this blog, something comes up and derails it. Sadly its been a while since my last post so I decided to get it back on track with a big landing! Adam Henrique is my number 2 PC these days and I am starting to try and treat it and him like my 1B PC. What would be better than to land what I believe to be his nicest rookie! 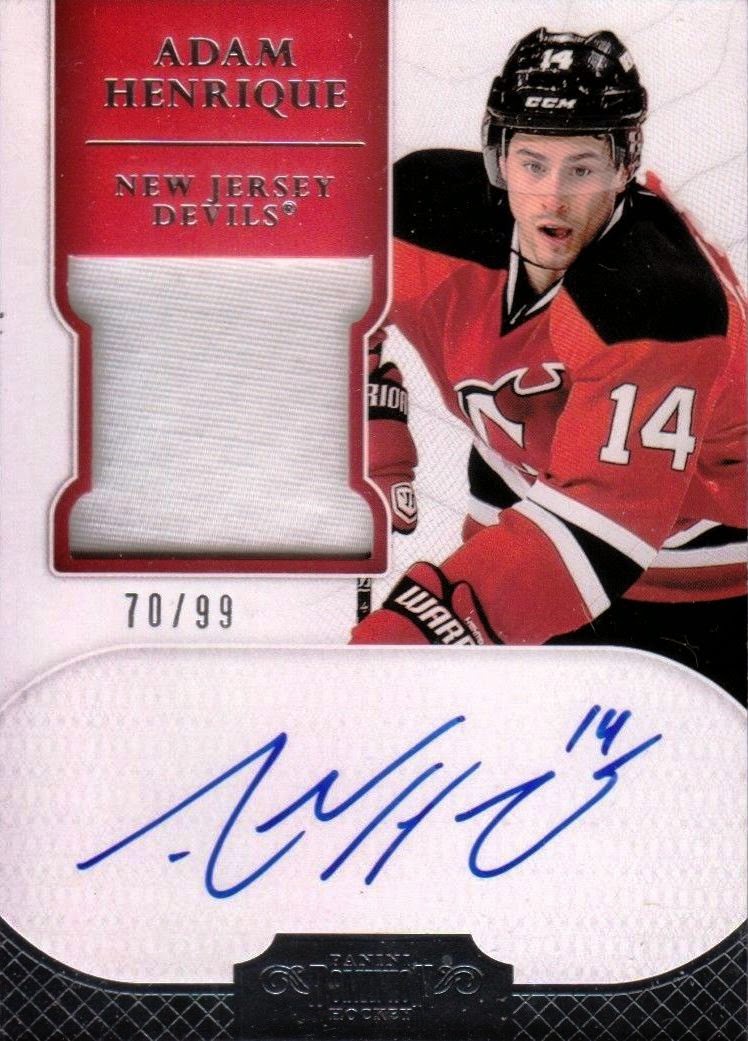 With all due respect to The Cup, I am a bigger fan on the design Panini used this particular season and just for comparison sakes, here is my The Cup version of Adam: 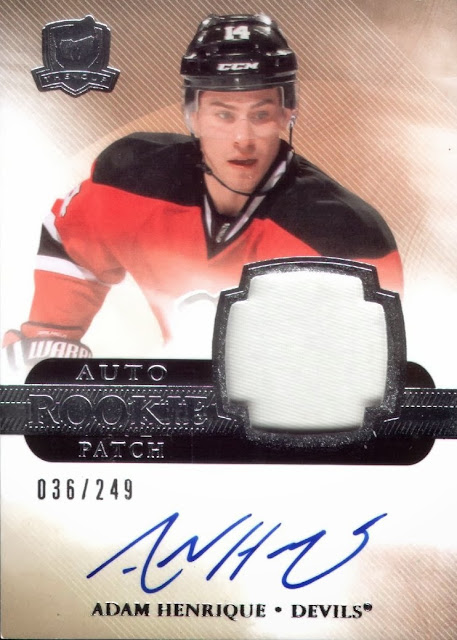 Now, everyone has their own preference and opinion, but I like the larger swatch and design the Dominion card better than The Cup and the numbering to /99 gives it a more premium feel (on the inside). With the being said, I do like that the back of The Cup does have stats but the write ups on the Dominion set aren't too shabby either. I believe the fronts carry enough to make up for The Cup having the better back.

So being limited to 99 means landing this card was a little tougher but time and patience always pays off and I was able to get it with limited damage to my collection which is always fantastic!
Posted by Pro Set Cards at 12:14 PM 4 comments:

Player prospecting is one of the things I enjoy most about the hobby. Being able to say you were collecting the player before they hit it big is loads of fun for me and in some ways I enjoy seeing the "value" of some of my cards increase (even though I don't sell many). This post is about a kid I see being a star in the league someday, Nick Bjugstad. 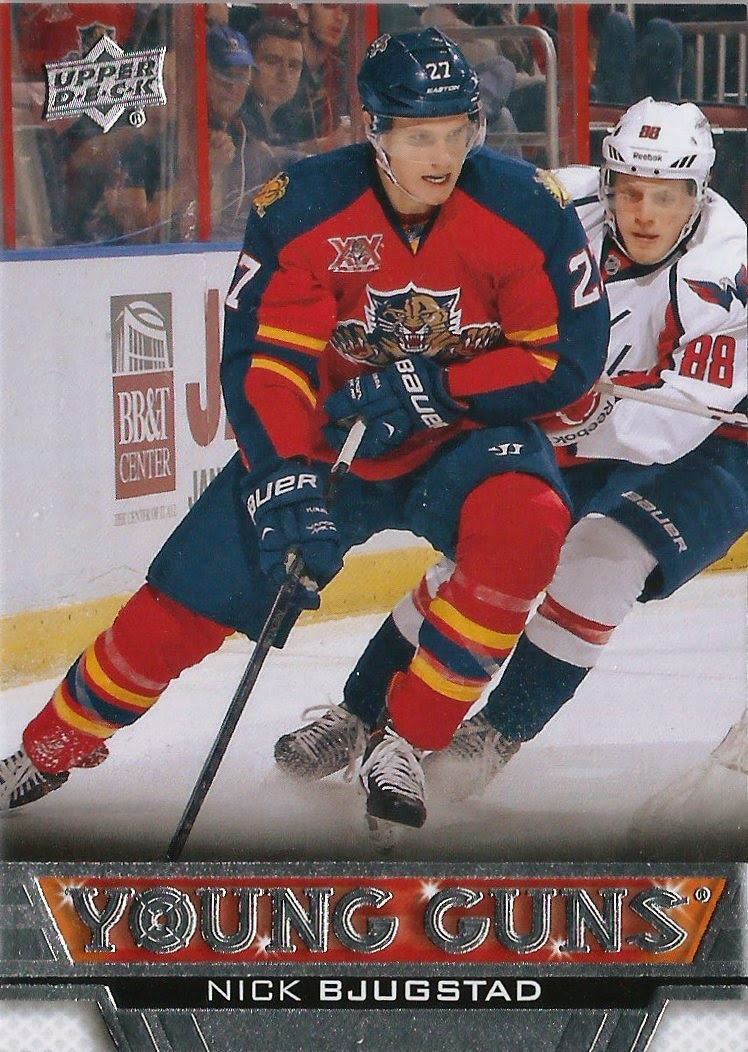 A staple in many people's collection is their player's Young Gun. I have gotten away from this with some players opting for more "value" but this one was a throw in with the next card so it was hard to say no. 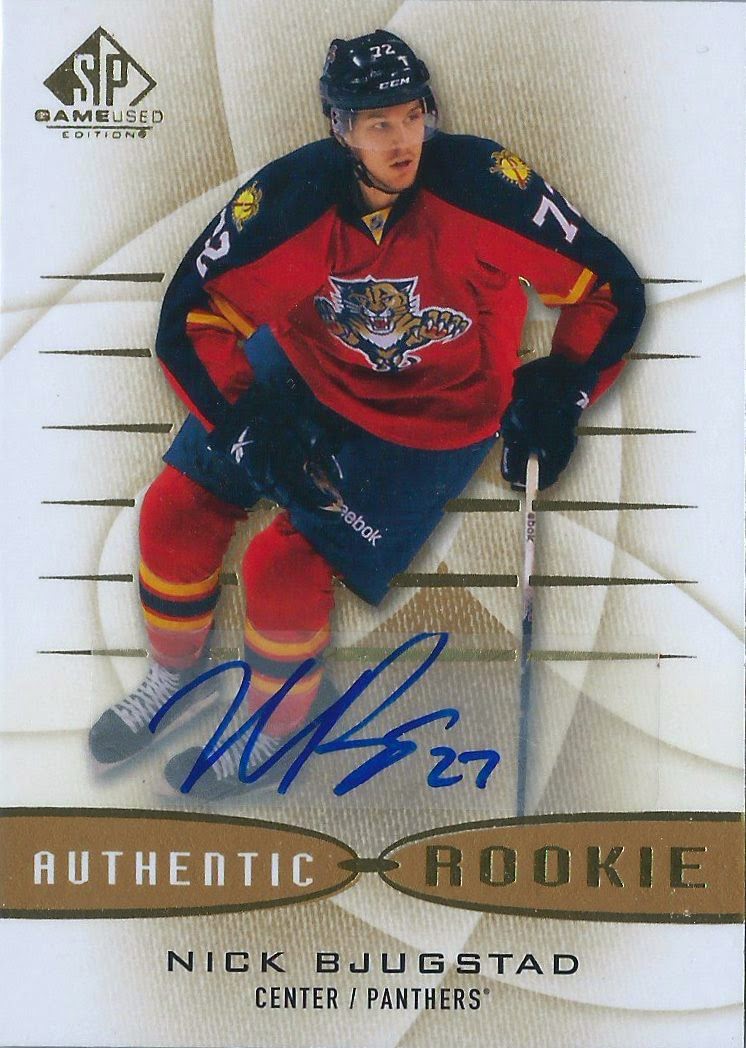 The rookie auto golds are pretty fun and always a great value. Many times you can find these for a hair more than the pack of the basic Upper Deck cards. I was pleased that I landed both for basically that price. 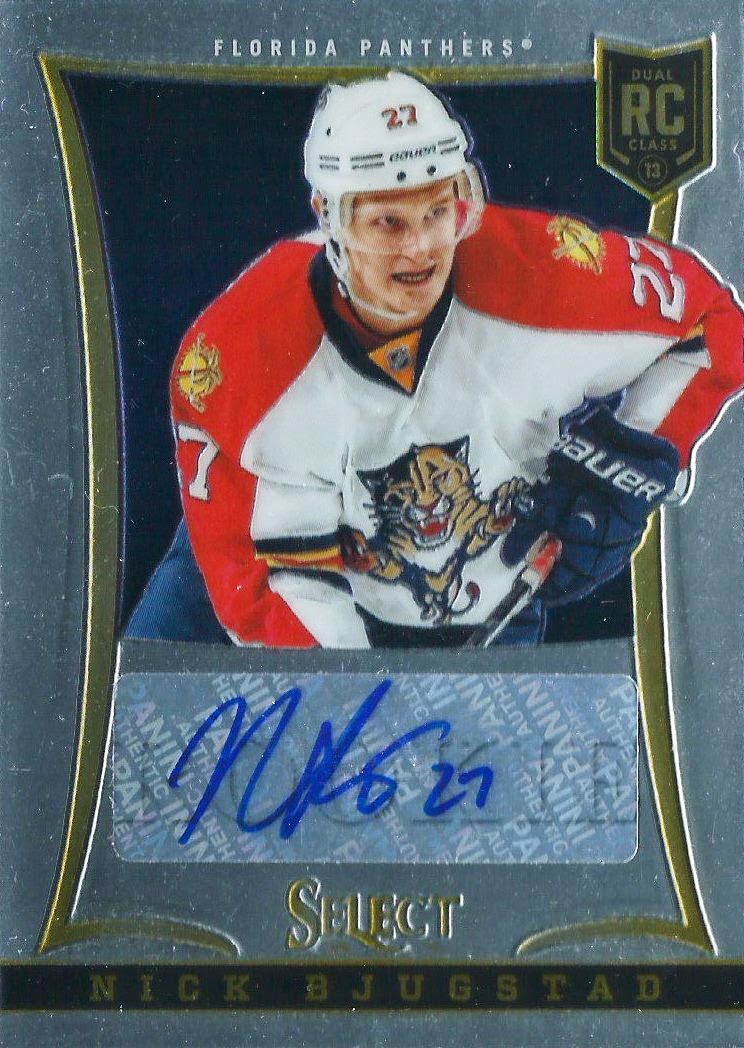 This past season I was a huge fan of Select. You get auto rookies for a Young Gun price. The print run is also very nice usually /399 which makes them much more rare than Young Guns too. I will miss this product this season but I will be on the look out for a replacement.

So what makes Nick so special? Hockey's Future has him ranked as a 7.5 which is a pretty decent score and shows he has solid potential.Nick lead the Panthers in scoring last season despite being a rookie and he even finished in the 5 in rookie scoring despite playing for a team that scored the second fewest goals in the NHL. This season he has experienced a bit of a sophomore slump which happens but I hope to see him bounce out of it by the end of the season.

When I bought a couple boxes of Contenders this summer I was hoping for a Henrique rookie. I did even better landing a rookie patch auto  but still if someone out there has a rookie auto I am certainly looking to trade for one.  During the mass flooding of plates I was able to land one of my number 2 PC Adam Henrique. While it isn't as nice as my Connolly and I don't have the print version of the card yet, it still is a nice addition! 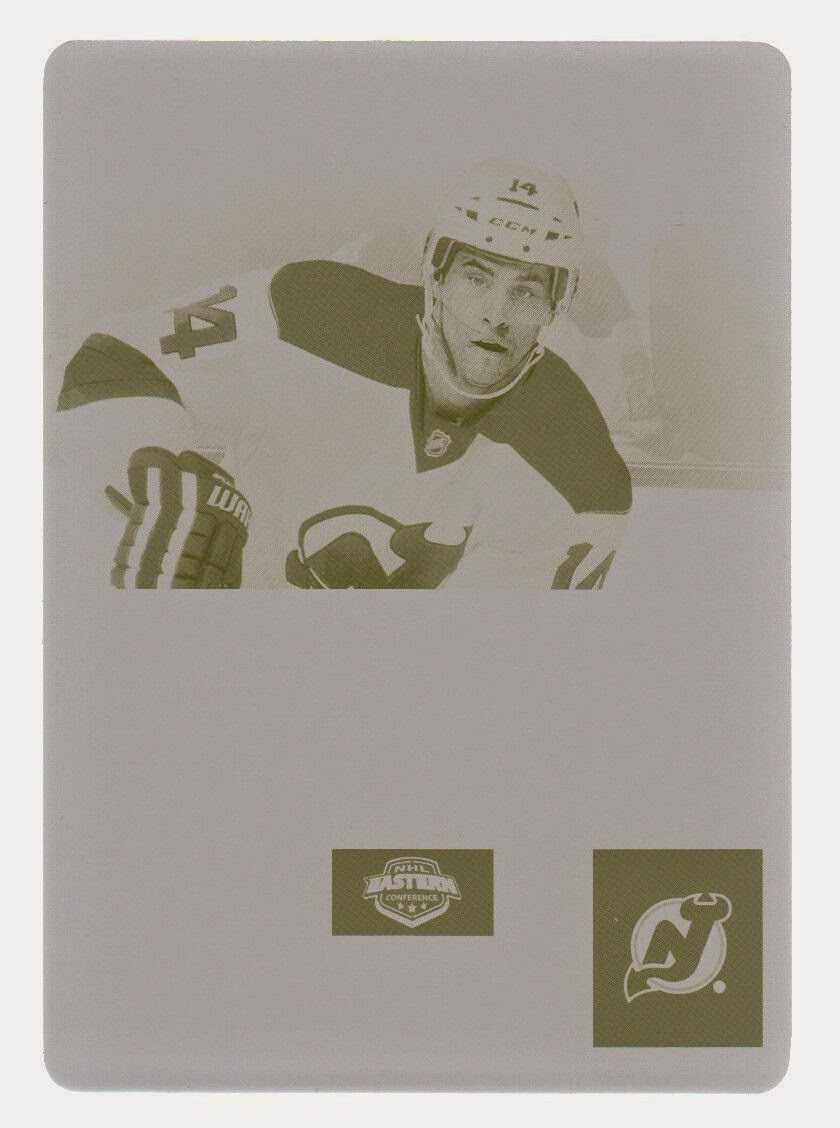 Here is the front, I would have loved to see a sticker slapped on the front with an auto! 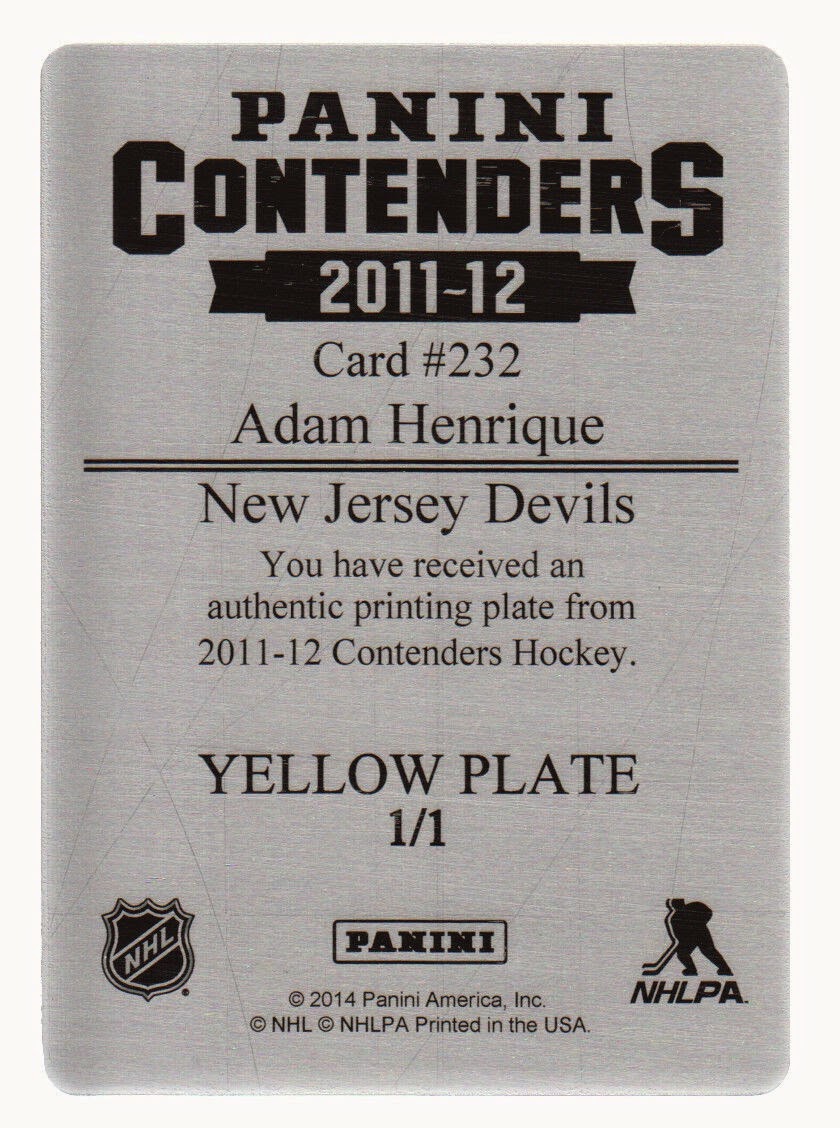 Here is the back side with the 1/1 print number.

What are your thoughts? Ever look for plates? Do you have any you are really proud of?