100 years ago, the first hockey set was created. ITG is doing a tribute set to honour the 100 year anniversary of the C56 by creating their Ultimate 10 to look like the original Imperial Tobacco cards. The cards were designed much like other tobacco cards of the time to help protect the cigarettes from being damaged. PSA offers a really neat article on the origins of the C56 set here. I am a fan of vintage cards which is part of the reason why I am working on my own Parkhurst project. After reading the PSA article online and seeing an article in the Aug/Sept Beckett I thought about looking for a reprint set of the C56 series. Sure enough, I was able to find a decent set that was done by the Lancaster Company. I am not too sure about the details of this reprint job, but I was able to purchase the set for $4.95 plus $2.50 shipping on Ebay. Other people are selling it for a bit more but the dealer who sent me this set mailed it pretty quick and the quality is decent. I looks like the cards where hand cut much like the original set was so a couple cards are off-centered. The ink of the back is brown much like the original set so all in all they did a pretty good job maintaining the feel and authenticity of the old cards.
Two of the biggest names from the set were Art Ross and Newsy Lalonde. 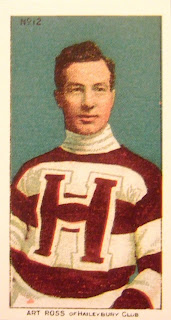 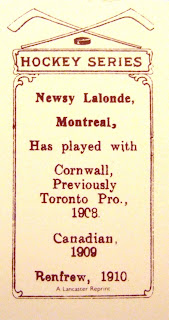 Art was famous for his donation of the trophy for the leading scorer and Lalonde was one of the first superstars of Ice Hockey. As you can see from the back of the card it is listed as a reprint. The fronts of the C56 are in colour and with the exception of a few are portrait shots.
My favourite card in the 36 card set is Fred "Cyclone" Taylor. 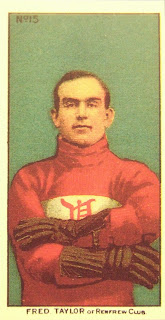 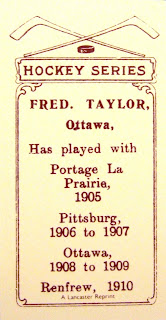 In this photo Fred looks rather menacing and during this time frame he was one of the most paid athletes in sports and the highest paid player in hockey. He made $5250 for a two month season.
Taylor, Ross and Lalonde along with many others from this set would make it into the HHOF. Each card in the original set is considered to be a RC of each player and for some reason both Jack Marshall and Art Ross end up with two cards a piece in the set. Someday it would be nice to buy a card or two from this set, but for now I will have to settle for the reprint version.
Posted by Pro Set Cards at 6:39 PM 1 comment:

The first card I purchased, was from Ebay, and it was Bert Olmstead. Definitely the best player of all the cards I have bought from this set so far. Bert was an all-star 4 times and lead the NHL in assists twice. His best season was a 70 point performance in the 55-56 season. Bert was an early power forward who could hit with the best of them earned the nickname "Dirty Bertie". Bert eventually made it into the Hall of Fame in 1985 while finishing with 5 Stanley Cups in 11 appearances. 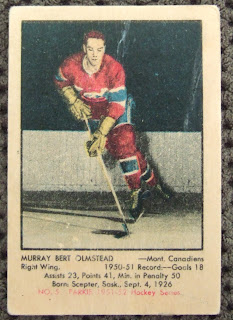 The card itself isn't in the greatest of shape. The red ink has a little fading, and there is some shiny glue marks on the back. The front isn't horrible, there are not major creases or damage to the front, you can see the reflection of a little glue on the front as well. This scan looks worse than the card does in person.