My First Vintage Card Ever

As some of my long time readers know and new ones will learn, my first ever hockey cards came from a pack of 1990-91 Pro Set. More specifically, this card is my first card I ever got since it was at the top of the pack. What most of you probably don't know if for the first few months I was collecting I got a few packs here and there every couple of weeks but the bug really didn't set in until the season was underway and I was buying packs for myself. My step-father was beginning to get into collecting too and was buying the odd pack and single and we would swap and compare and I fell in love with the 90-91 Upper Deck Low Series and worked towards completing that set.

Every now and again I would go into an actual card shop instead of a convenience store and really get a chance to see some cards. Most in the display cases were cards from the 80's and many had price tags that weren't paper route friendly. However, one night I remember my step-father and I were out driving someone and he had heard some convenience store had a few singles in it and asked me to go in and take a look. At this stage my collection was all 1990's stuff and was pretty small in size, maybe a couple hundred cards at most and he didn't have any more than I did either. So I went inside and in a glass display case right by the potato chips and junk food were some cards. I honestly couldn't tell you which ones were in that case given it was 25+ years ago, but I did see one card that was very affordable and just spoke to me for some reason: 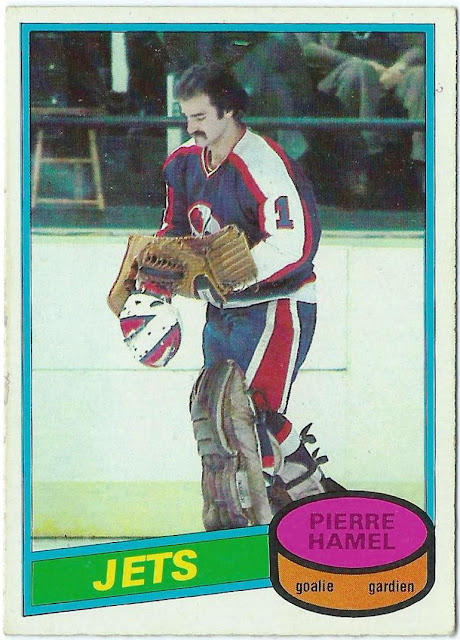 It was one of the oldest cards in the case and I just thought it looked pretty cool. The price was 75 cents and having had more than enough change in my pocket it was a transaction I was pleased to make. 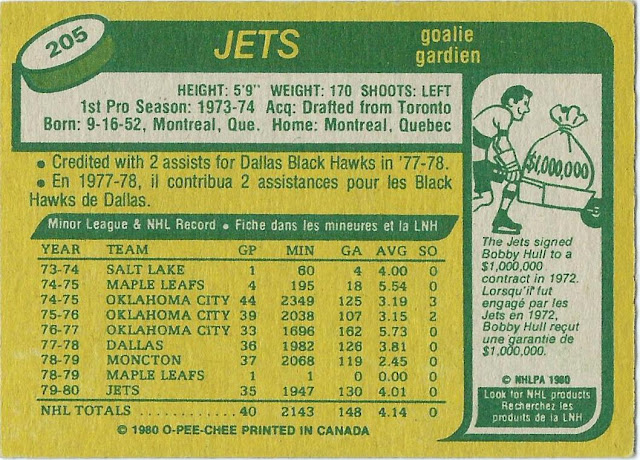 Here is the back of the card and as you can see, Pierre wasn't exactly Ken Dryden. The card itself isn't even in that great of shape, but it was in one of  those card saver card holders and I was just happy to own an "old" card.  (As an aside, I actually have been trying to finish this set over the past couple years and am down to just one card!! I will share the set whenever I manage to get it. I decided to include this Hamel in my set which makes it a little more fun and personal.)

I would buy the card and come back outside and tell my step-dad there were some things inside so he came in and I can't remember if he bought anything or not. I would look at this card 100's of times over the coming days and eventually add many more older/vintage cards. Many of my friends would focus on trying to grab a Lindros RC etc but I will give the 11 year old version of me credit, I balanced my spending between pre-90 and post-90 cards which to be honest is probably how I still collect today.

While the internet has softened the value of the cards from the 80's and no one is retiring off their collections, I do love the design of many of these sets and the memories I have from collecting them. I specifically remember my step-dad and I going splits on a Rack Box of 1982-83 OPC. The box cost us $500 at the time which was a lot for a 12 year old to come up with half of but I did and enjoyed breaking that box. We each got a full set and I was allowed to keep all the doubles which I still have to this day and all are in near-mint condition or better (except the miscuts). Of course in hindsight the smart move would have been to never open the stuff but it was fun and it's an important set for that reason.

Anyway, this was one of those posts for my kids to read down the line and thank you for stopping by and sharing in my memory.

Do you have any recollection of your first vintage cards or did you happen to just collect when it was the "good old days"?
Posted by Pro Set Cards at 3:28 PM 10 comments:

The greatest player ever to play hockey was traded and eventually one of the most iconic non-rookie cards from the 80's was born. 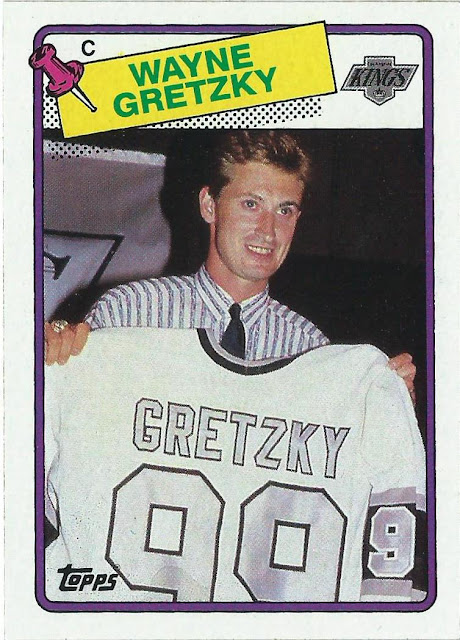 For those who aren't in the know, Wayne Gretzky who was smashing just about every NHL offensive record was traded to the LA Kings for a number of players and draft picks and $25 million dollars. The key piece other than the money was Jimmy Carson who in all fairness was a fledgling superstar. Jimmy was the second overall pick in the 1986 and already had a 55 goal season in just his second year in the NHL. Alas poor Jimmy made the mistake of demanding a trade out of Edmonton after putting up great numbers in his first year with the club and his career was never the same after that.

Wayne on the other hand excelled in LA and made stars into superstars.

The above card is often known as the Gretzky sweater card in the 88-89 Topps set. What is most interesting about this card to me is it's place in history and it's place among collectors. Once upon a time, the 88-89 OPC and Topps sets were heavily coveted during the collecting explosion of the early 90's, I remember the Hull Topps rookie trading for about 50 dollars and the OPC pushing 150 dollars. However, thanks to the bubble bursting and the internet, many prices of 80's cards have dropped steadily over the past 20 years instead of increasing in value like so many envisioned and hoped for. What I find very cool is the value of this particular card hasn't changed and is actually the highest listed card in the 88-89 Topps set ($20 dollars). It's more valuable than a Brett Hull rookie, Brendan Shanahan rookie or even a Joe Nieuwendyk rookie. Wayne Gretzky's 9th year card is more valuable than each of those three Hall of Famer's rookie cards.

Here is the back side of the card. 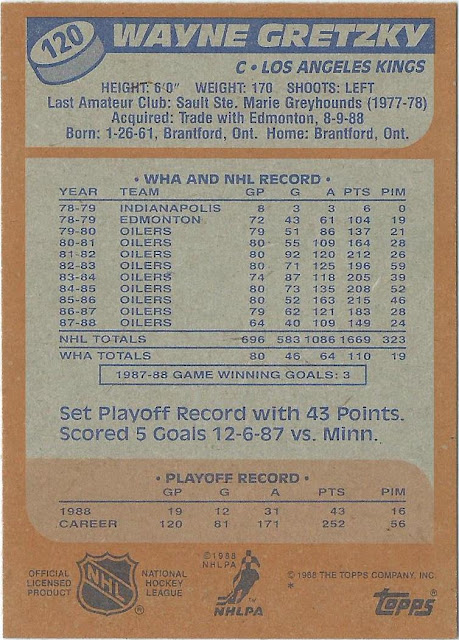 What is also impressive is the Gretzky Sweater card is considered even more valuable than it's OPC counterpart. 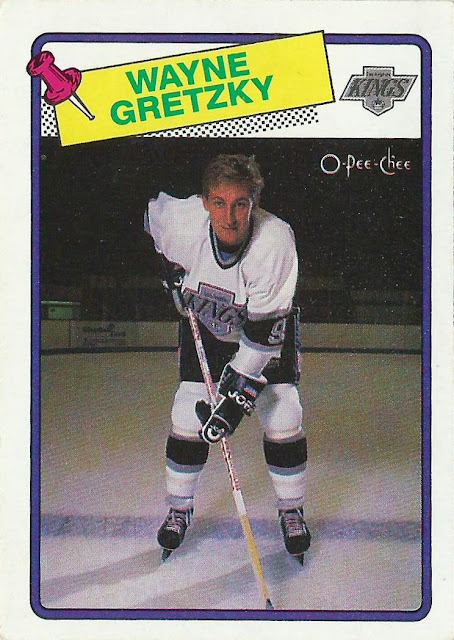 See anything missing on this card? Compare the two and look by the push pin!

OPC decided to run with a different photo than the Topps card and went with a posed photo of Wayne wearing his Kings jersey and forever changed the 88-89 release. Collectors appreciate Wayne in uniform but it seems that the Topps card from the news conference trumps this one and it's pretty much the only case in the 80's where a Topps card is more valuable than it's OPC counterpart (with the exception of the 89-90 sets where OPC was over produced). While I like the above card, the Topps card just seems so much more interesting and magical. It is almost a better representation of the most shocking trade I have ever experienced in my life. 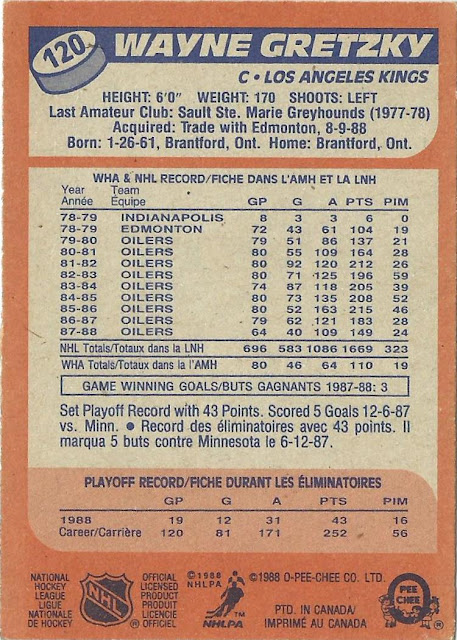 Here is the backside of the OPC card.

So where were you when the trade happened? Did you collect or try to collect these cards? Personally I remember the trade well and I grew to really like the Oilers during the 87-88 season because after the Devils got bounced I cheered for the Oilers to bounce the Bruins which they were able to do and while they would win again in 1990, the Dynasty was over and things were never the same again.

I have owned the Topps card pictured here since the early/mid 90's when I bought the whole set for 60 dollars which seems silly since they can be had for much less now but the years of enjoyment have been worth it! The OPC version is apart of my OPC set which I bought a couple years ago because I have a pretty big sentimental attachment to the set as a whole which I will hopefully share some day in another post.

Anyway, thanks for stopping by and here's hoping we never see a trade like this again.....ever!
Posted by Pro Set Cards at 2:49 PM 2 comments: