So a while back Shane from Shoebox Legends writes to ask me if I wanted to participate in an experiment. I was flattered and immediately agreed to (for the sake of science of course). So fast forward a little over a week and in my mail was a wonderful care package of 9 cards in a PWE!  The best part is they all arrive safe and sound and what would have originally cost a finger or two to mail to Canada set Shane back nothing more than probably the hair off his knuckles!

I on the other hand, get ALL the rewards! Check them out! 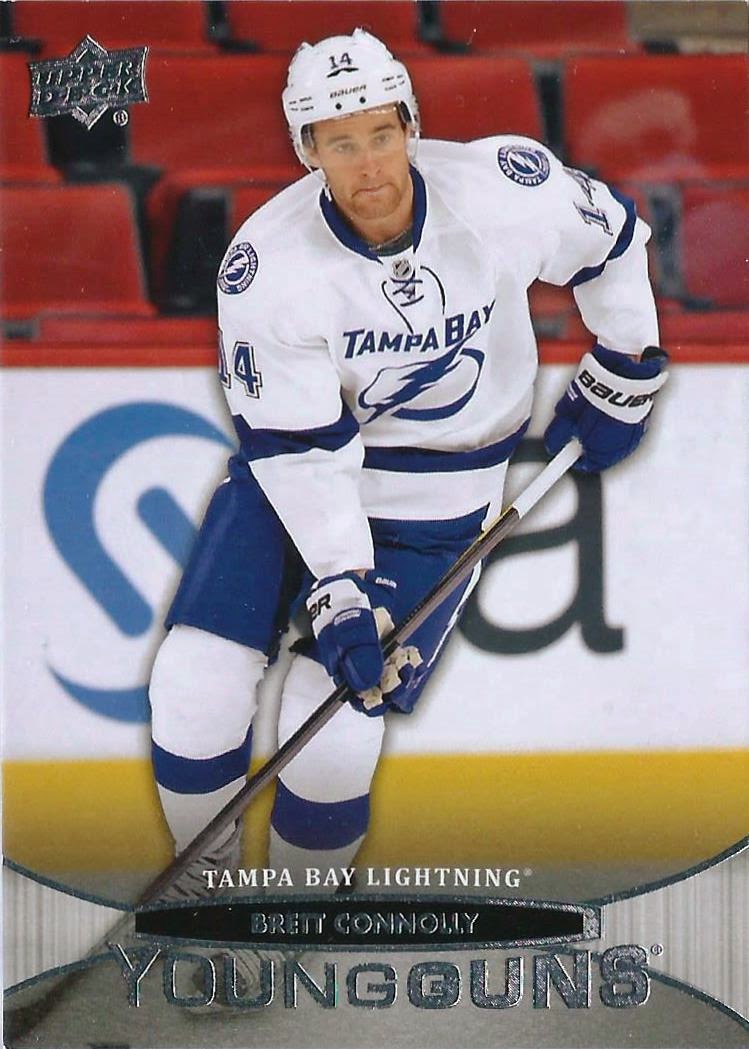 Here is the gem of them all! My first Brett Connolly Young Gun! Despite having countless rookies and autos I never actually had this card (now I have 2, story to follow). Brett was recently traded to the Boston Bruins which did excite me because he was getting a new start after being buried low in the depth chart due to the hoarding of many young offensive forwards by Steve Yzerman. 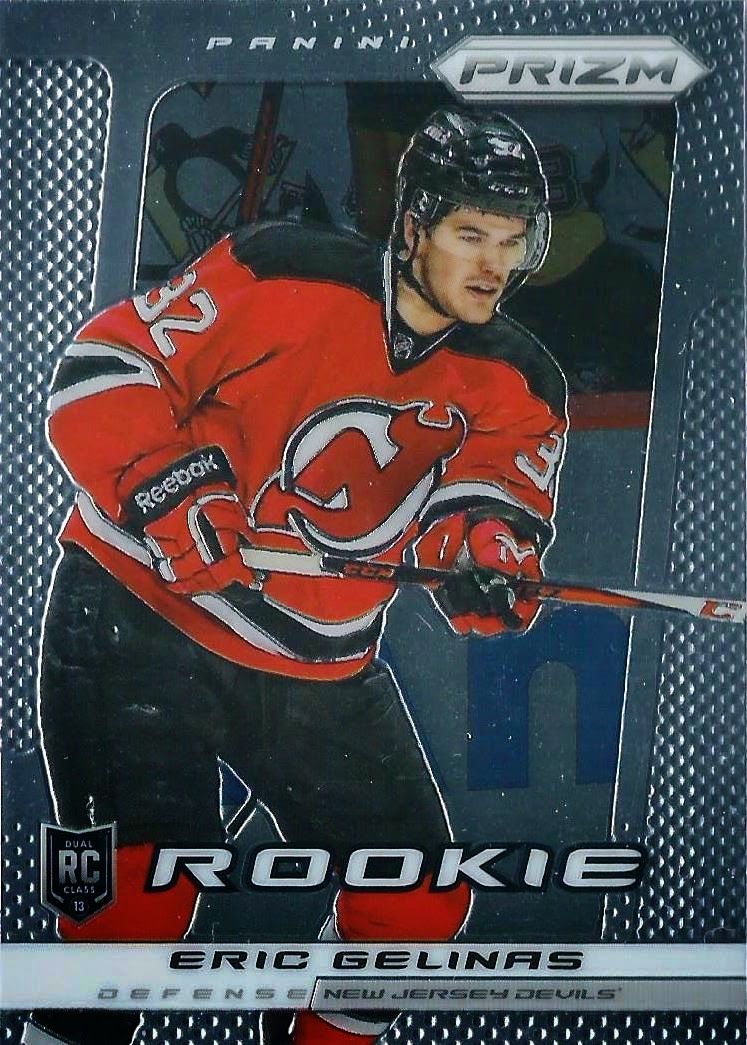 Love this kid, just wish the coaches did. I have a couple of his rookies but this is the first Prizm one! Eric was a bit of a whipping boy for PDB, but since his firing, Eric has seen an increase in ice time and a decrease in scratches which will hopefully translate to a longer term deal next season (especially since we let Marek Zidlicky go). 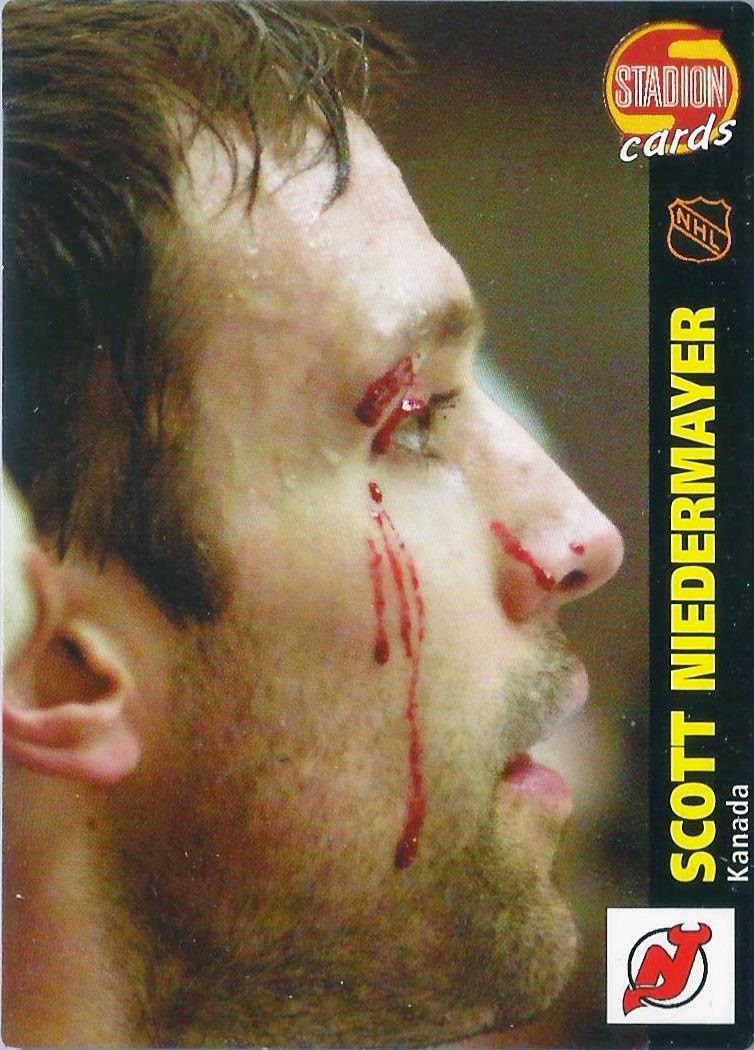 I said that the Connolly YG was the Gem, but that is because I was expecting it. The real diamonds in the rough are this card and the next one.The Stadion cards are a Czech release from the early 2000's which feature players from all sorts of sports. Here is an awesome photo that I doubt Upper Deck would ever put on their cards. Scott has been wounded in action and I can almost picture this being taken while he was on the bench waiting to hear if the player got 4 minutes for the infraction! Or maybe it was a fight? Maybe it was a "no call". Well the cool thing about these cards, is there is a date stamp on the back which states when the photo was taken it this one was from Game 3 of the 2001 Stanley Cup Finals. Ville Niemenen took a 2 min boarding call against Scott in the first period so this could have been the result or maybe it was something missed. Either way, Scott didn't take any penalties during this game so it is safe to say it wasn't a fight. Love this card! 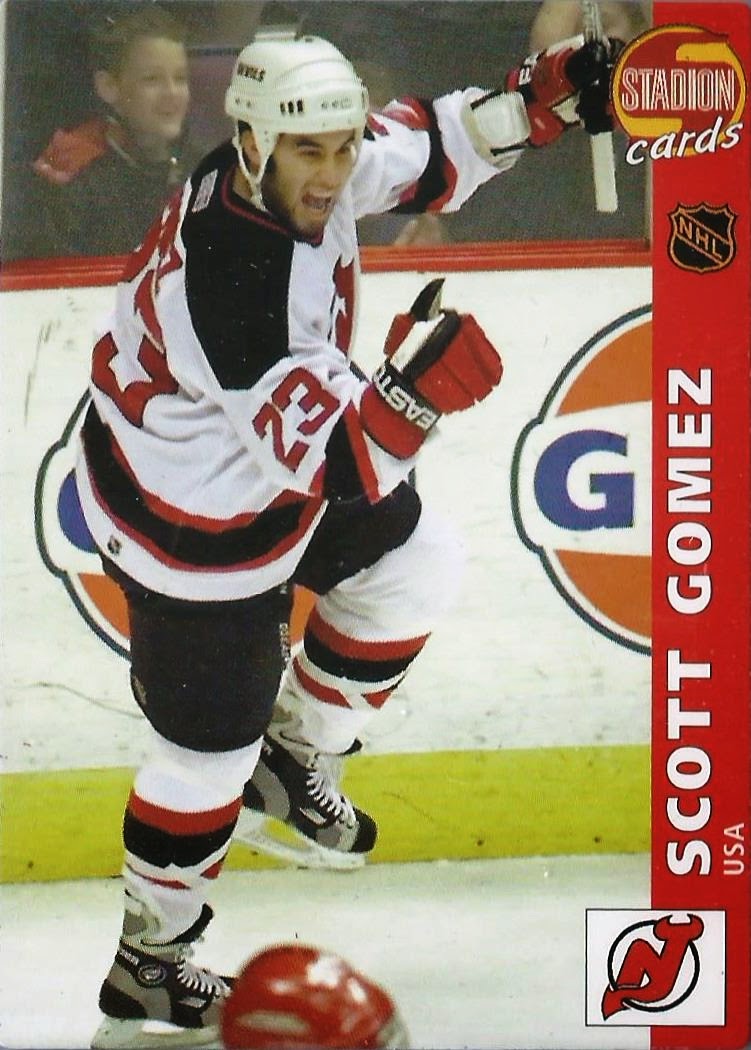 Here is another one, this time Scott Gomez is celebrating a goal! No games this time, this game is from April 20 2001 and while the Devils lost this game 3-2 to Carolina, they would go on to of course win the series and make it eventually to the Cup final. This particular game, Scott Gomez was one of the goal scorers but Arturs Irbe stopped 37 of 39 from the win. Based on these two cards I am very tempted to try and see others from this set. I am not sure how many Devils make an appearance but these two are great examples so far. 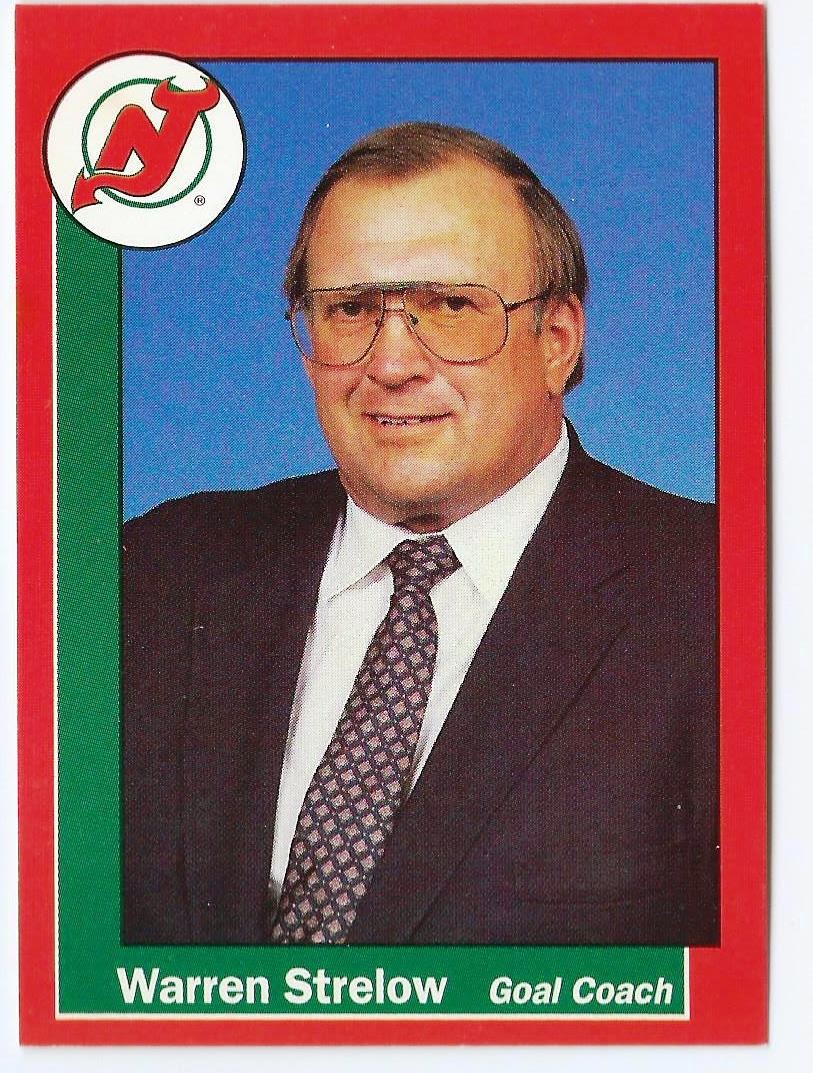 Yikes! Ok, don't judge a book by its cover but I have a hard time seeing him as a goalie coach! Maybe the accountant or something like that but not goalie coach. Well, it turns out boys and girls that the goalie coach for the 1980 USA Miracle on Ice team was Mr Strelow! He was only with the Devils for one season but he did coach in San Jose and Washington as well. 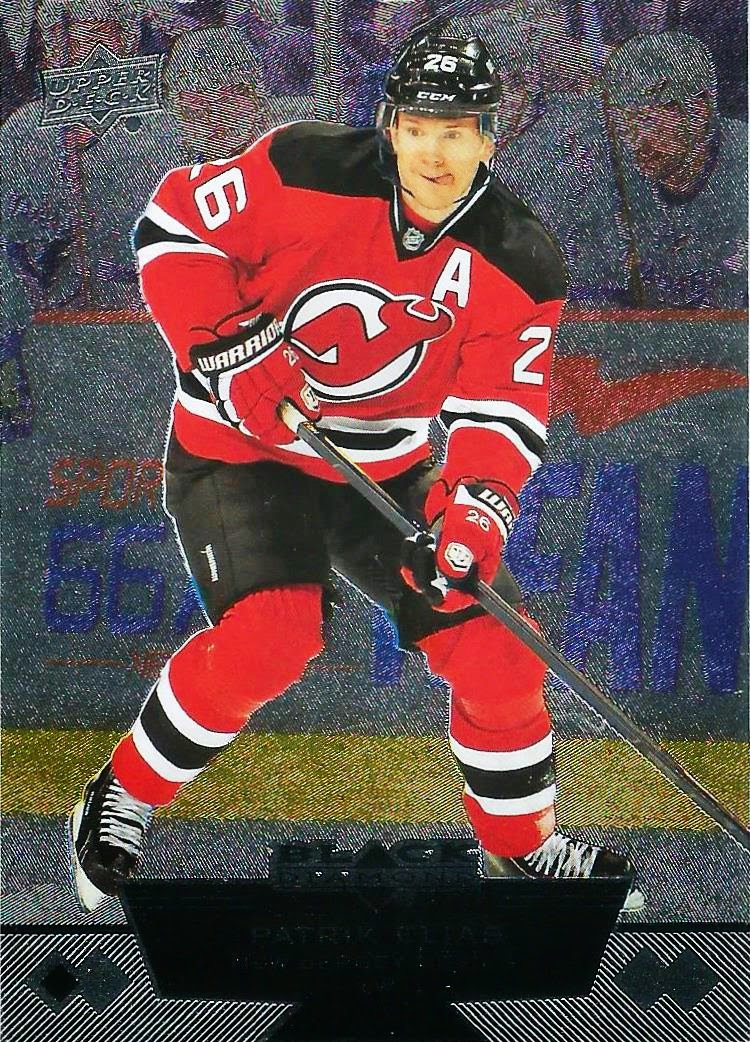 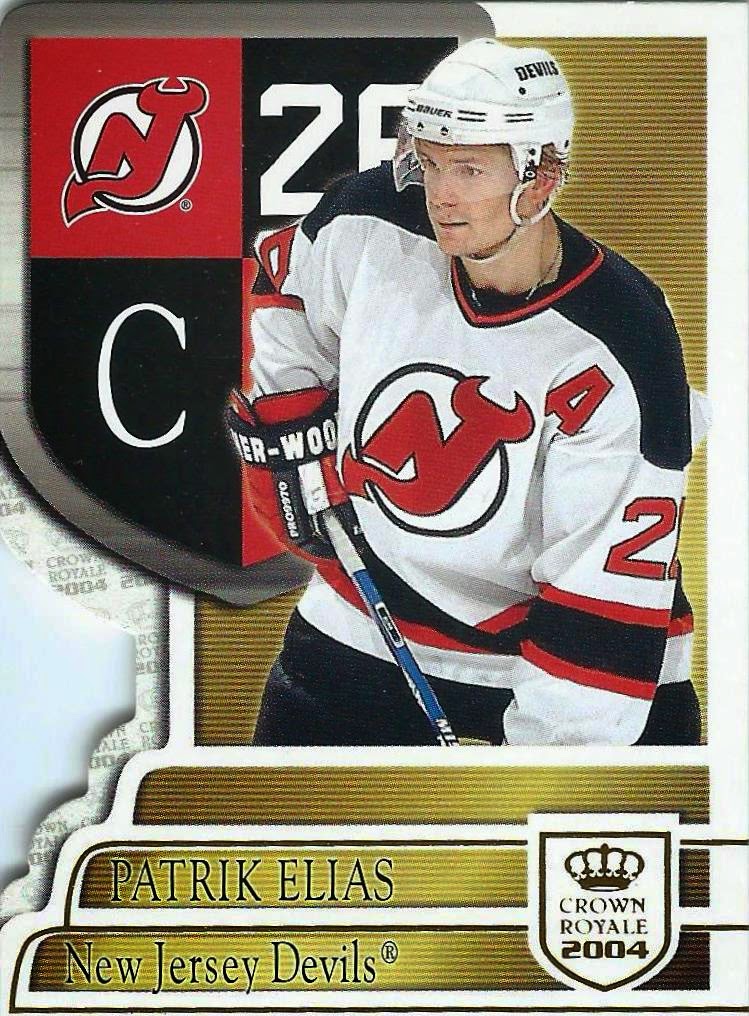 In addition to these 7 cards, there was also base cards of Zach Parise and Brian Gionta filling out a PWE stuffed with 9 cards. Every card made it safe and sound and I want to thank Shane again for including me on a pretty awesome experiment. Hopefully it isn't 3 weeks until my next post either :)
Posted by Pro Set Cards at 9:18 AM 3 comments:

Contest! Sign up while you still can and make the scoring race more enjoyable!

I can't say enough amazing things about Casey and his blog the house of oglethorpe. But more importantly is he is trying to run a contest and I assure you, you want in! Get over there now and sign up for some serious fun.
Posted by Pro Set Cards at 7:12 PM 1 comment:

Here is a riddle I am sure many of you have heard:


So what is the answer? Well it is the one thing I seem to seriously lack these days despite how much I try and that is time. So many cool things to share and show and so little time. I really wanted to share my International Experiment I did but I missed three cards from the scan so I need to find time to do that later and share it in my next post. In the meantime, I didn't screw this one up so here it is: 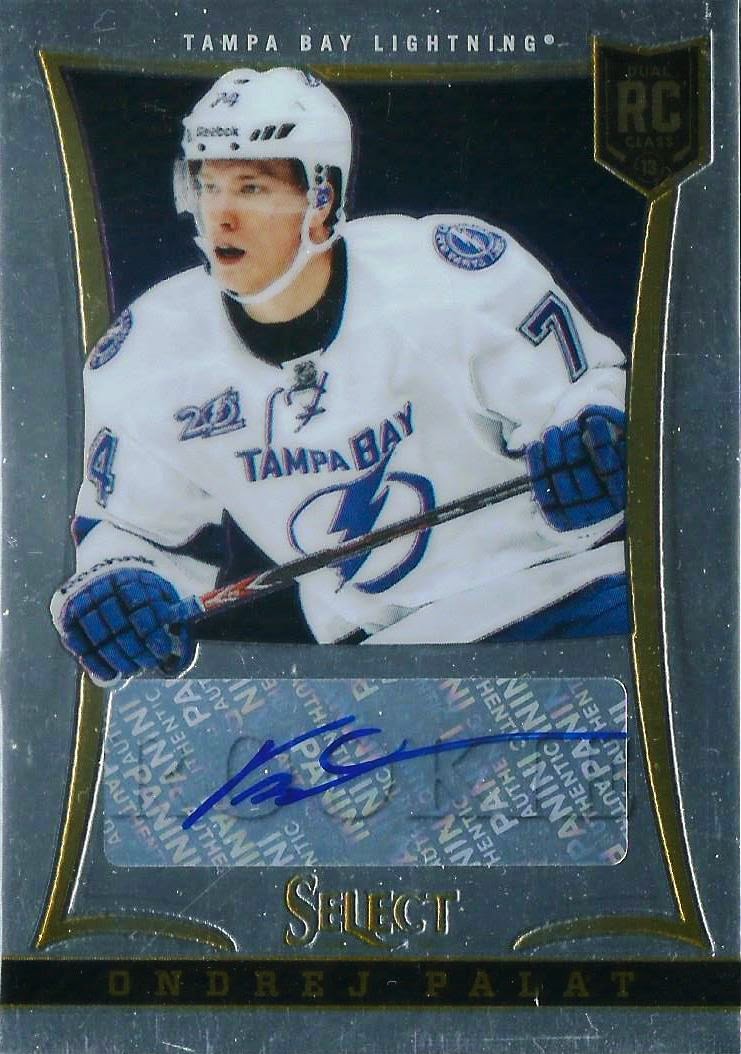 Yep, more Select! One thing that Tampa has a surplus of is skilled offensive forwards. One reason why they have been so amazing this season despite injuries to their defense is they roll three very solid lines that play at both ends of the ice. Ondrej Palat a former seventh round pick (4th last picked in the draft) is proving he deserved to be a first round pick. Palat was a runner up for the Calder last season and this season is on pace for career high in assists and points. Another fun card from the Select set and one I was very happy to add to the collection!
Posted by Pro Set Cards at 8:54 AM 2 comments: