Auto number 3 was a pickup for two reasons. First I wanted to get a Don Beaupre auto much like I wanted a Tony Tanti. Don was one of those players I just seem to remember from my childhood. He was a pretty decent goalie who not too flashy, but did offer you a dependable keeper who could steal the occasional game. Don was a two-time NHL all-star and he lead the league during the 90-91 season with 5 shutouts.

Don's career numbers are anything to be ashamed of either. He finished with 268 career wins, 17 shutouts and a career 3.45 GAA which was is pretty good for a player who played primarily during the Firewagon days.

The second reason I went after this card was the photo. A kick ass green jofa helmet and goalie pads that are screaming rawhide leather. The koho stick is the key accent piece to an awesome retro look. This card is every bit as good as the Delvecchio in my opinion and the icing on a 3 card lot that I am very proud of. 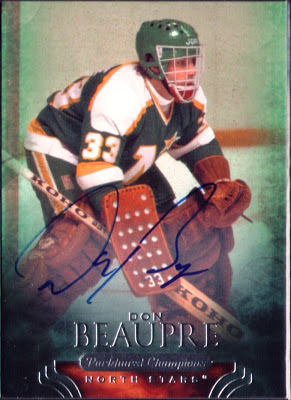