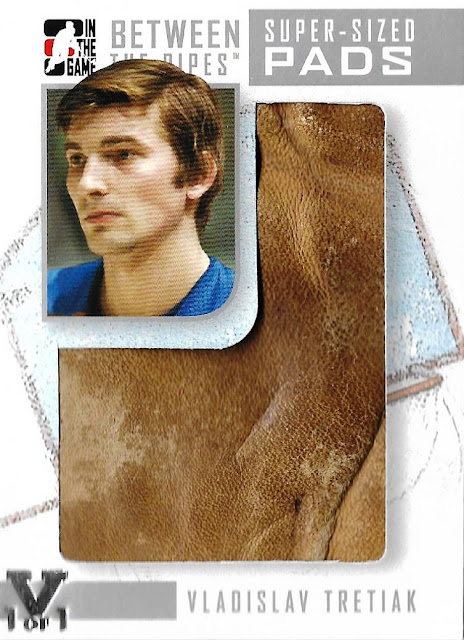 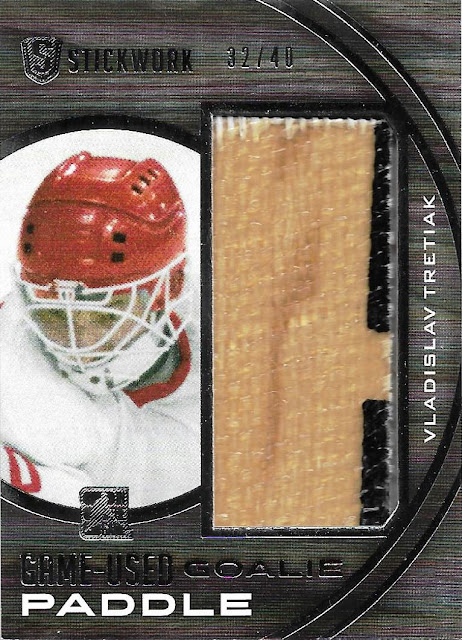 Check out my BASEBALL cards

Well, where did the last 3 weeks go? Back at work again and now that things are in swing I realized; "Hey I have a blog, I better get back to putting up some posts." While I wanted to show off some completed sets in my next posts, finding time to scan them up properly and figure out how I wanted to share them has made things difficult so I decided to skip past them for a week or two and focus on some other trades, pick ups etc.

With that being said, I did also grab a few baseball cards with my COMC order and I am going to share them today.

Since my collection of baseball cards consists of a few Randy Johnson rookies, Randy Johnson relic and the 1987 Topps set it's safe to say there are lots of baseball cards I don't have. A few bloggers have been so kind to send me some Tigers cards over the years and I have always enjoyed looking at the different sets and players but there are a few that I would say I have always wanted. With this order I was able to get a few crossed off that list.

First up is Mickey Tettleton 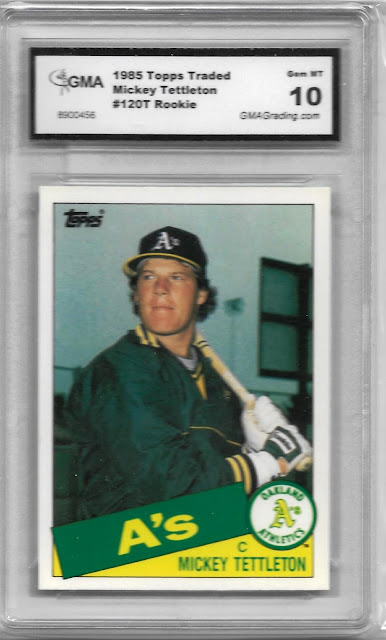 I'd be lying if I said this card was always on my want list. Fact is I never knew it existed until I was on COMC. Growing up a Tigers fan in the early 90's there were a few Tigers who I really enjoyed and Mickey was one of them. I loved his batting stance and he provided the Tigers with lots of clutch hits and big home runs. The card itself is pretty cool and I like the design of the front and the back. It's even slabbed with a grade of 10 which makes this a junk wax gem to this collector! 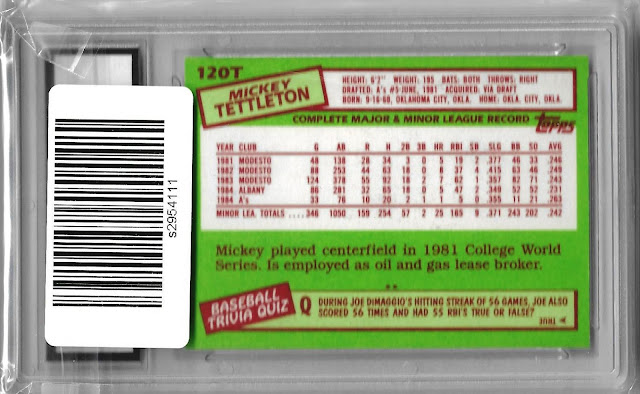 Here is the back side. I actually didn't know that fact about DiMaggio which is a pretty cool addition.


Next up is Cecil Fielder 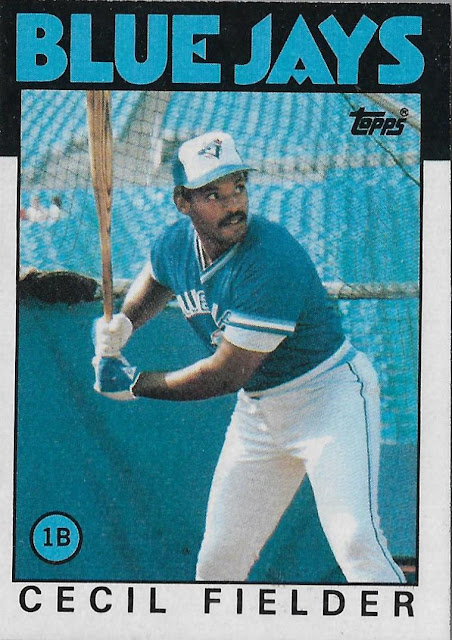 Growing up, Mickey was my third favourite Tiger and the award for my second favourite goes to Big Daddy Cecil Fielder. Given he has three rookie cards (not counting OPC) I had no idea which one to get but thanks to the saturated market I could land all three for the price of a Sidney Crosby base card it seems. First up is his Topps version. Looks like Cecil is taking BP. 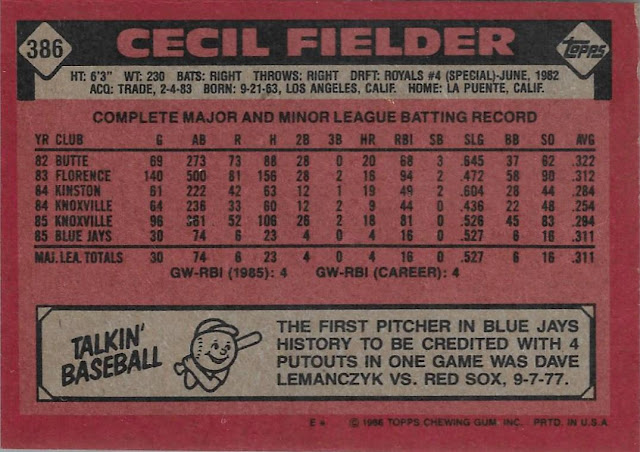 The Topps card isn't too hard on the eyes. I don't love it as other years but it's decent and nice to see Cecil in action to some degree. His stats say he's 6 foot 3 and 230. I don't believe he finished his career with those numbers. 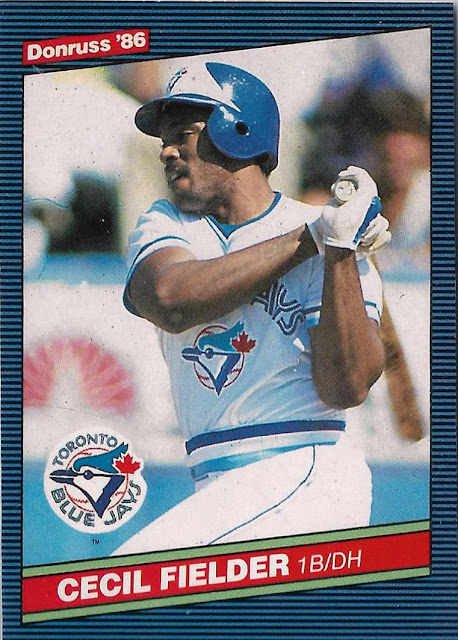 Next up is the Donruss rookie. Here Cecil is in a game and it looks like he's just finished his swing and by the look on his face I can't tell if it was a hit or a strike. Regardless, of the three rookies this one is my favourite. Definitely an 80's looking card but reasonably well done when compared to the other two. Less stats back here, but I love the colour and you get more in words than in tables. You also get his middle name which I am not sure if I had knew it before getting this. 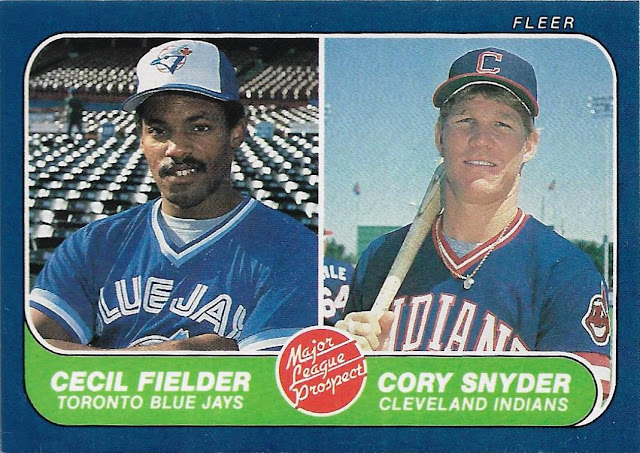 Third up is his Fleer rookie. A bit of a throwback to when you had to share your RC with another face. Cory Snyder didn't drive the value of this card up at all which is unfortunate for Cecil but he at least is the reason why anyone would want this piece of art. 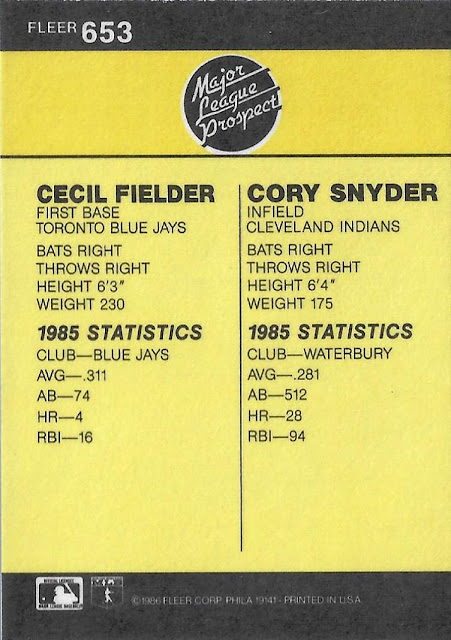 Don't care much for the back side here. I am not sure what other collectors think when they compare these 1986 releases but for me personally I'd have to say Donruss > Topps > Fleer based on the Cecil cards.

For those curious, I would have to say from my childhood my favourite Tiger was Alan Trammell. Hope to add his RC and Auto to my collection someday but the beauty is patience pays off and I'm sure I will come across one in my travels someday. I did get one more baseball card and it would be the most iconic rookie card from my childhood. 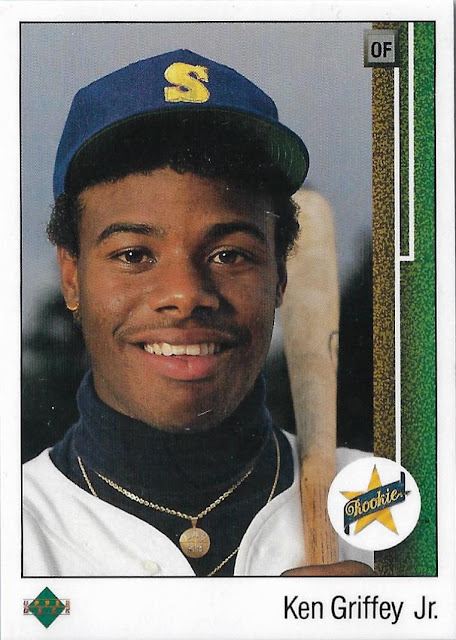 The 1989 UD Griffey Jr rookie is about the equivalent of the 1952 Topps Mantle for my generation. I saw many kids walking around with these cards in all sorts of shape and cases etc. After all these years with most prices dropping down to that of a dime a dozen, this one card seems to have managed to keep demand and supply in check. I always wonder how amazing he could have been if he had stayed in Seattle,  and maybe never hurt his hamstring. I want to believe 700 could have been in reach but I guess we will never know. Happy to add this iconic card to my collection. 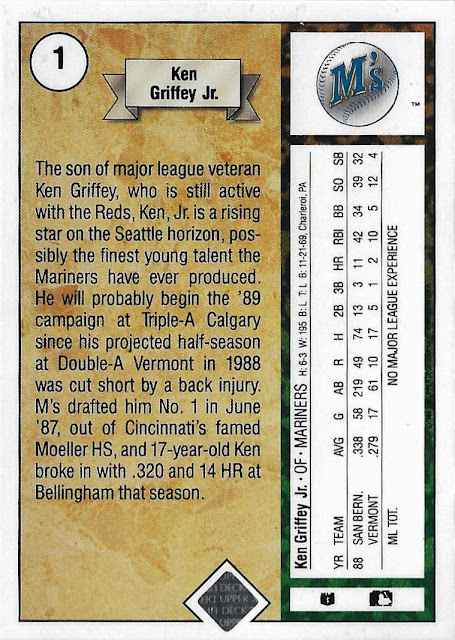 Backside of the card for those like me who want to see both sides.

So there you have it, sorry I didn't get to my hockey sets but here are a few baseball cards I added and the reasons why I did. No idea what my next post will be, I guess it will be a surprise for both of us. Thanks for stopping by!
Posted by Pro Set Cards at 11:20 AM 6 comments: