If there was ever a fire and my family was safe and I could go and grab one item, this might be it for me. I have made it very clear 1951 Parkhurst is my favourite set all time and when it comes to this set there really isn't much bigger and better than this. 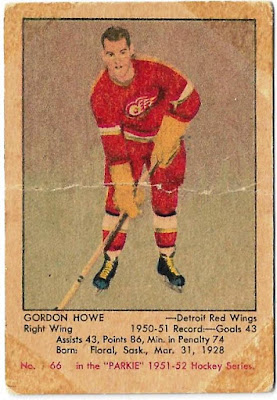 As you can see from the front, there is some damage. A pretty significant crease and some tape stains. With that being said, I only see beauty. This card is in fantastic shape and thanks to being taped in some book for a number of years have helped preserve the card I believe and prevented other creases from happening.

To see the card in person is a pretty awesome experience to be honest. It's hard to truly explain but for me personally this could be one of the best cards I will ever add to my collection and one I will certainly cherish for the rest of my life. 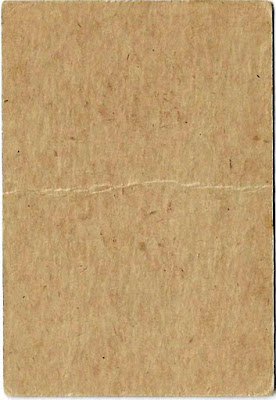 It is worth sharing the backside to show that this card is indeed a gem. Nice clean back with the same crease you may have noticed on the front.

What adds to my enjoyment of this card is the fact that I got to meet him many years ago and get a couple autographs. More recently, I bought and read his book Mr. Hockey which was a fantastic read and in ways I felt brought me closer to the man that was Gordon Howe. In many ways this marks a turning point for me in the set as I have been able to land a few whales from this historic set but alas there are a few more in the sea (Richard, Sawchuk, The Goal) but patience has got me this far and patience will be what it takes for me to finish it too. Thanks for stopping by and while my next post won't be featuring any cards of this magnitude, it does feature an amazing surprise!

Sometimes you go to a dollar bin and see the same cards you already have in your collection 10 times over (Mark Recchi 90-91 UD Rookies) and sometimes you find something that makes you go...."Hey!". I had such moment finding these: 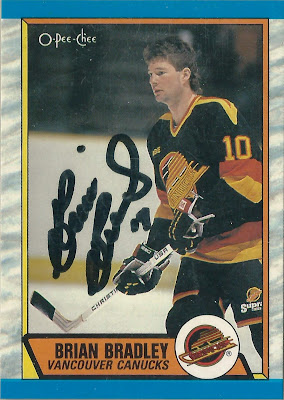 This is not a buyback rookie but likely an autograph that someone got in person. Not having any comparables or anything like that I bought this card on blind faith. Seriously, who'd forge Brian Bradley's signature.

Here is a legit one I found online as a comparison

Apart from a sloppy thick sharpie on my signature is all seems legit. Brian wore 19 during his prime years so I am guessing that is why he signed this one with a 19 instead of 10. Also dates my autograph in the post 1993 range.

Brian Bradley was a fun pick up because I remember him as Mr. Expansion draft and he had a monster year with the Lightning scoring over 40 goals in a season. 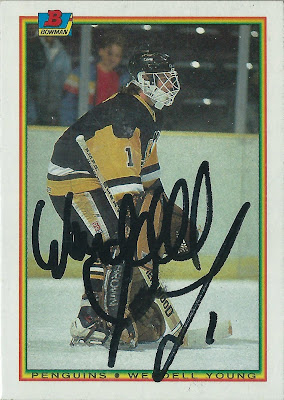 Here is another fun auto for a dollar. In fact, I got two of him. There was also an OPC rookie as well which I grabbed but only bothered scanning the one card. I didn't doubt this one for a second because Wendell was from Halifax and this autograph could have been easily obtained by a collector in my province who bumped into Wendell Young. Neat fact I learned while researching this post is Wendell Young is the only person who has rings from the following championships: CHL, AHL, IHL and NHL. Certainly a very fun trivia question to ask someone!

Anyway, two fun players who both had some successes and at a cost that was totally worth the risk. I don't believe I could even buy two stamps and get these via TTM for that price. Have you ever taken a chance on an autograph that wasn't certified? Anyway, thanks again for stopping by and happy collecting!
Posted by Pro Set Cards at 3:26 PM 6 comments:

Continuing on with pick ups from the past is card number 36 in my set and 28 in the set which is Woody Dumart. To be clear, this is NOT his rookie card. There are a number of rookies in the set and this isn't one of them. Dumart and a small number of others who were still playing in the NHL at this time had rookie cards make it into the OPC sets of the late 30's.

With that being said, there is still actually loads of demand and value on some of these cards despite more than a decade of time has passed between their first and second cards. Landing another HOF'er off the checklist was very rewarding and the condition of this card is very acceptable for my personal needs and was a very welcome addition. 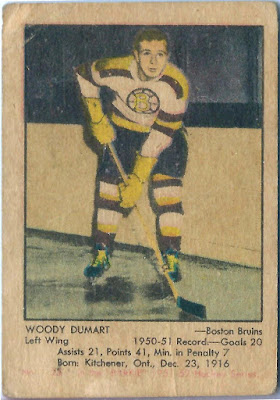 Not a bad looking card, a little bit handled and some soft and rounded corners. The red ink on the bottom is very faded as well but you can still read it all when you look at the physical card. I definitely get a great deal of enjoyment each time I cross one of these off the list and the fact it isn't just a common increases the enjoyment! I am nearly caught up with just a couple left to share. One big fish coming up sometime soon so keep an eye out for it. Thanks for stopping by!!

This may be the strangest post I have ever put up to this point and may be the strangest I ever do, time will tell on that one. A while back I bought a box of 89-90 Topps for a couple reasons. First the box cost me a dollar plus shipping and I wanted to have some cheap ripping fun, maybe build another set and hopefully create some art. I kept all the wax packs and hope to create something cool with them this summer. As far as the set goes I am almost done sorting it and it appears I will have one complete set for sure which is also nice (only hit one Sakic) but I believe I am missing a sticker or two.

When I was opening the packs, each pack had this strange foreign non-cardboard object. I decided to put one of them in a top loader so some day I could show my kids what used to come with hockey cards. 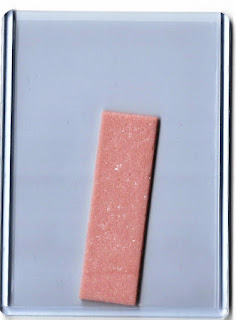 That baby is MINT! Not flavored but mint in terms of condition. I thought it kind of silly at first but it actually does look a bit neat in person to see a top-loaded piece of gum. Anyone else out there have one of these preserved for future generations to enjoy? I have been tempted to buy another box and never open it but I haven't gone as far as doing so yet. Anyway, thanks for stopping by, I promise no more gum in my next post (not even the famous 90-91 Upper Deck Joel Otto card).

They say you don't know what you have until you lose it. Long story short we as people can often be guilty of taking things you have for granted and I certainly have been a repeat offender in that department. However, this post isn't really about me, it's about Patrik Elias. It's hard to find a player who has silently put together such an amazing career playing for a defense first team but still putting up All-World Numbers. Many might be skeptical but don't worry, I will share some supporting figures.

First off, his raw numbers are pretty decent:
1240 Games 408 Goals 617 Assists 1025 Points and another 125 Playoff Points all are franchise highs for the Devils with the exception of games played. Patrik played in 4 All-Star games, made the All-Rookie Team and one First All-Star Team and he won 2 Stanley Cups.

If you look at all those raw numbers I think ANYONE would induct him into the Hall of Pretty Good. However, there are many players out of the Hall of Fame with better numbers and stats. So here is where we consider the fact that Patrik Elias did play a majority of his career in the dead puck era and those numbers are much more amazing than they appear. If you take a visit to Hockey Reference you will find many of the facts I am about to point out.

408 Goals actually adjusts to 464 Goals when you consider overall scoring. That total puts him in the same group as Bure (463) Bossy (461) and Hawerchuk (435) and to be honest, Patrik wasn't known as a goal scorer.

1025 Points adjusts to 1144 Points. This is the most telling stat in my opinion when you combine his goals and assists you get a true sense of his place and standing. This total is 57th best All-Time and has him around players like Crosby, Gartner, Perreault and Henri Richard.

In addition to putting up offensive numbers he was really valuable to the club in all situations and would kill penalties and back check with the best of them. When you consider the player as a whole I believe he will make it to the Hall of Fame. Probably not on the first ballot but I do honestly believe he has a shot. Now time for the cards! 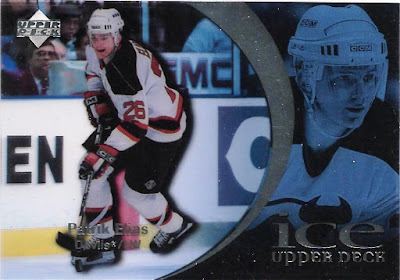 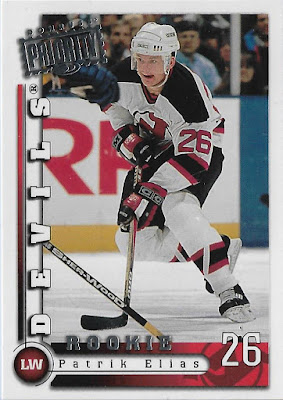 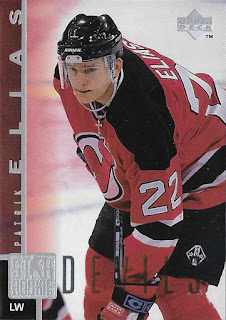 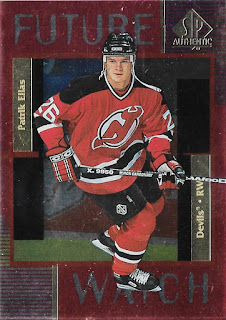 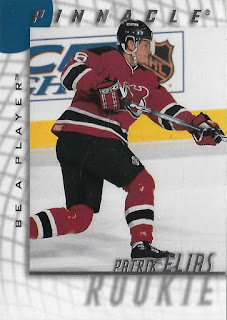 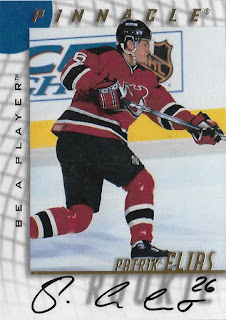 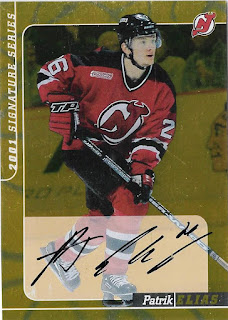 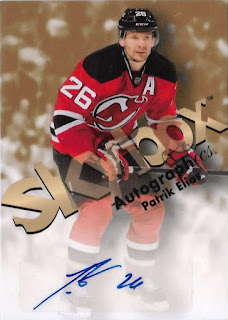 06-07 Be A Player Signature Duals Elias and Rafalski 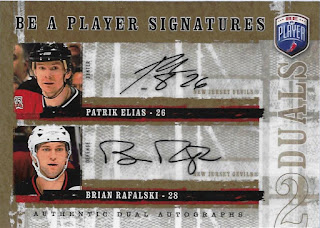 These are a few Elias cards from my collection including some of my favourite rookies and all my autographs of Elias. I do have a few game used cards as well but nothing that I felt would have added to this post so I decided to leave them out. While Elias was never a PC of mine per-say, I have collect a few cards of him over the years and I will continue to enjoy what I have and maybe add a few more in the future as I continue to appreciate all he has done for the franchise. Happy Trails Patrik and thank you very much for all you've done and I wish you health and happiness in your retirement.