Hey all, still not dead but somedays it probably felt like it. Truth is I am still around, I have been tweeting a bit lately and a bit during the summer and early fall. One of the reasons is it is just so easy to post and interact and it can be done anywhere. However, I am dedicated to start posting here, especially after a few years of limited posting and content. One project I do have on the go for all those who are into Twitter or Pro Set please check me out @ProSetCards.

I can't leave you hanging on here without posting something so here is a gem I found on COMC ages ago. 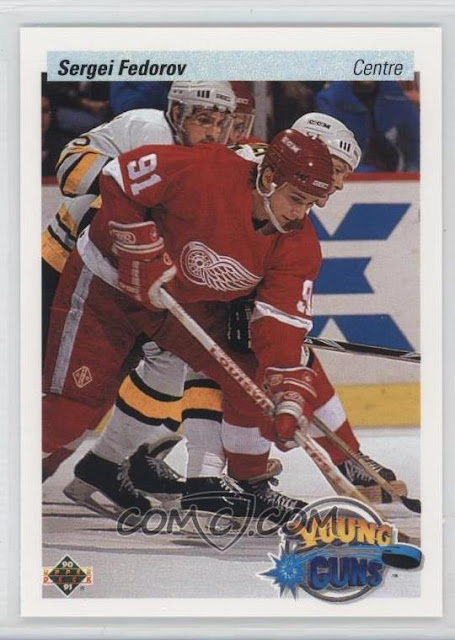 Once upon a time I remember when I was a kid and we had satellite tv there used to be these QVC-style sports card auction site/sales site. Usually it was just sales and my step-dad and I would watch it for hours. The guy pretty much always said (Neear-mint to Miiint). The grainy standard def broadcast of the early 90's wouldn't betray his analysis either. On this channel I saw Brett Hull OPC rookies selling for 150 dollars and this about card was pushing close to 100 dollars on some evenings. I paid $1.58. Money very well spent because I remember laying on the floor wishing I had that card because I thought someday it will be worth some serious money. Well turns out it isn't but the memories are priceless and that is the true value! Anyway, I hope this post finds you all well and I promise to be back in a day or two! Cheers.
Posted by Pro Set Cards at 9:37 PM 9 comments: