The next two picks on my list were really really difficult to rank and I only knew they must be on my list. Many will think they need to be much higher and I probably agree with you. However, at the same time I feel they both may have been victims of just playing in an era with so many superstars.

#28. Steve Yzerman. Steve was a winner both individually and as a leader of a team. 3 Cups, Triple Gold Member and many other medals. He won the Selke, Pearson, Conn Smythe and Masterton showing he can do it all. Over 600 goals and 1700 points also prove his remarkable abilities. 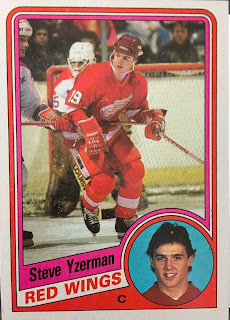 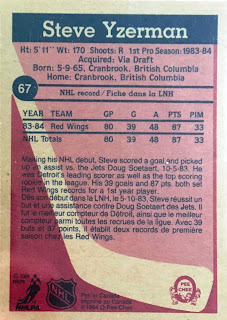 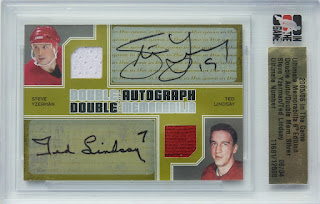 How do you place someone so great on a list of other amazingly great players? I had a very difficult time with this. In the end I tried my best to weigh all factors. Offensively Steve was superb including a season I still am in awe (65 G, 90A, 155 PTS). For his career he's among all the elite (top 10 in all three offensive categories). As a leader he was also among the games best and perhaps as good as Messier if you ask me. Defensively, the man was top 5 in Selke voting 5 times and perhaps if underrated in any area it may be in this. He did an excellent job rounding out his game in the second half of his career earning him a spot among the greatest of the great and that's why he's 28th on my list.

So...why isn't he higher? One really surprising fact is Steve only was ever named to the year end AS teams once. I know guys like Wayne and Mario made it difficult for him to get the recognition he deserved but in the end I had to place him here and I hope to prove myself in the coming posts.

Next up on the list and perhaps you may begin to get a sense of what I value or may not value from a player.

#29. Brett Hull. The Golden Brett lead the NHL in goals 3 times including an amazing 86 goal season. He was the 1991 Hart Trophy winner and he’s a 3x All-Star. One of the best pure goal scorers who was an underrated passer. 741 career goals and one of the most infamous Cup goals. 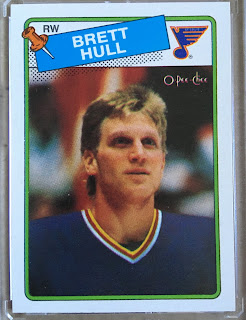 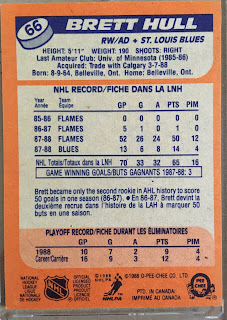 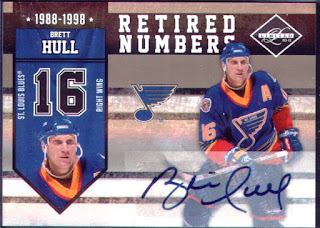 What is the greatest single NHL season goal total? Many including myself would say it is Wayne's 92 goal season. That number was insane and to this day has never been broken. However, what would happen if you gave Joe Malone an 80 game season back in 1917-18? Would he have scored more? He did have 44 goals in just 20 games. However each era needs to be measured with a slightly different yard stick. Some statisticians try and do that by normalizing game numbers, average offensive output etc. When you take the approach that Hockey Reference does, you'd learn the greatest season is Brett Hull's 86 goal season in 90-91. 90-91 Wasn't as offensively open as some seasons in the 80's and more offensive than anything in the past 20 years but his numbers would normalize to a 78 goal season which is the highest by 6 goals over Ovi's normalized 72 goal season in 07-08.

Hull was a monster when he played much like his father and he was indeed an excellent passer and decent all-round player who'd end up on some Selke ballots in 02-03. Brett lead the NHL in goals 3 times and is 8th in goals per game all-time as well.

Personally I like him higher than Dionne as if I needed one more spot to fill a one game win all line-up, Hull is that difference maker who could take over a game or seal the deal on the PP. However, he did have his weaknesses too and as a result isn't higher on my list as well.

For the past couple years, a friend of mine and I have spent lots of time making lists. We both really enjoy reading them which in turn awakes a challenge of making one yourself. The lists have varied from movies to music to sports. I am going to share some of my results on here starting with my current one, The Top 30 NHL Players of All-Time.

For this list, I made my rankings based on a number of factors and a primary focus of wanting to look back on my list in 5 years and feel it still has held up well. However, given stars like McDavid, Matthews, Kucherov and others, their impacts have been huge thus far but too small a sample size to ASSUME they will remain healthy and on the same projection they currently are on. I have also included cards from my collection to make this fun for myself. In addition, I've been sharing my list on Twitter which I have included what I have already said but have been able to add a little more insight on here because I am not faced with character restrictions.

If a player made the NHL they were eligible for the list and I also included their international resume as well so that I was comparing complete careers as a whole.

#30. Marcel Dionne. Marcel didn’t accomplish as much as most HOFers in terms of awards but he did pile up stats galore. Marcel averaged the 5th most PPG (1.31) in NHL history and was a 4 time all-star. In 18 years he’d only play 49 playoff games but he’d have 45 points there. 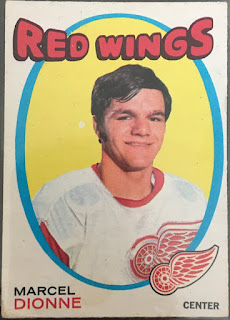 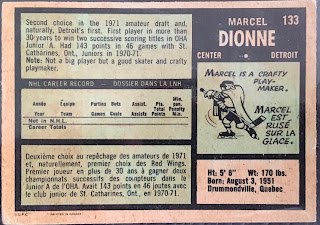 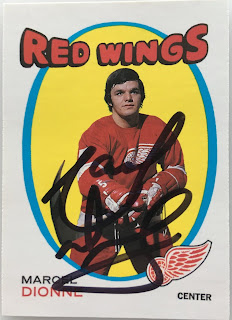 When I started my list I had a larger list of players who I felt would make a case to make the top 30. Some spots were easier than others but where you make a "cut-off" is both difficult and important as you are saying this in the minimum of what it would take to make your list. Yes Dionne's resume is not as great as others but hockey is a team sport and it speaks as much about him as it does as his circumstances.

I can't imagine leaving someone who had scored 731 regular season goals and 1771 points off my list. Marcel would top 100 points 8 times in his career, 5 times of those placed him in the top 3 in the league. Internationally Marcel would represent Canada a number of times and put up very respectable numbers on those occasions. For his efforts he'd win a Canada Cup in 1976 and three bronze medals at the World Hockey Championship at a time when Canada didn't send their best and Russia had a pro team participating.

Why isn't he higher? To be honest, he has done nothing wrong in his career but hasn't done enough to separate himself from the players above. Still I have him ranked higher than Joe Thornton, Guy Lafleur, Sergei Fedorov and many other HOFers. I believe that Marcel is a player who was excellent in a time when the league was rough and if you moved him to any other era he would have been just as successful individually as he was in his career.

Thanks for stopping by and Happy Father's Day to all the Dads out there.