So in the two years not all of my pick ups have been modern cards. It's true that I did probably focus more heavily on rookies and autos released in the past decade or so but I have keep true to my love of vintage as well and here is a prime example. 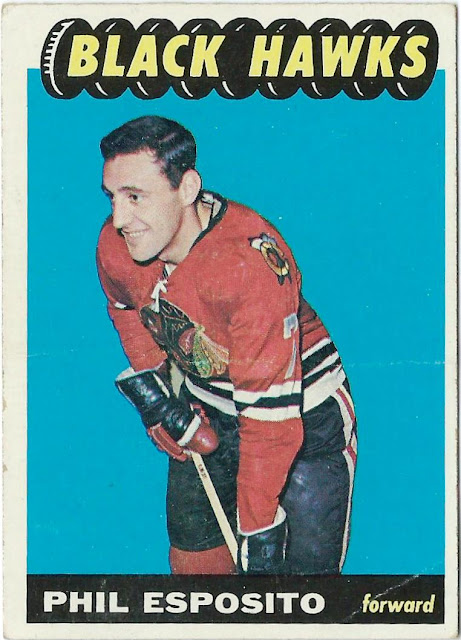 Most vintage collectors and Esposito fans know he was "Black Hawk" before he was a Bruin but still seeing this card always struck me as strange. Phil played 235 games for the Hawks before the monster trade to the Bruins happened and forever changed Boston history. Phil was no slouch either scoring 74 goals and 174 points during this 3+ seasons. His game went to a whole new level as a Bruin thanks to Bobby Orr and Co and in turn I believe Phil helped the careers of players like Ken Hodge and John Bucyk. In Bucyk's case he actually put up his best 5 season totals from age 35-40.

As you can see from the card itself, it isn't mint by any stretch but I think it is in pretty great shape regardless and thanks to the shape it was in, it was very affordable. This gem was rescued from my LCS. 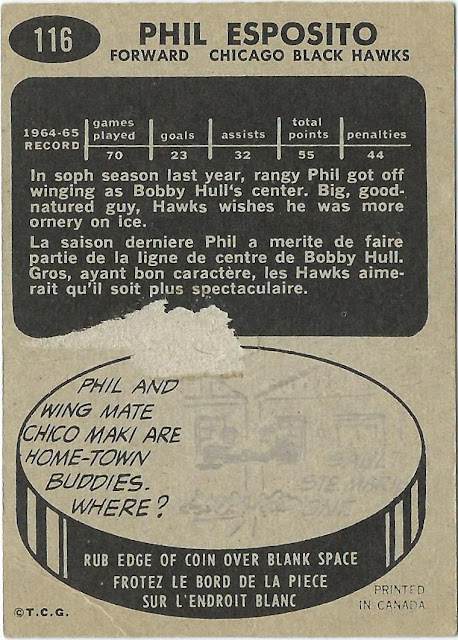 From the back side you can see why I got a good deal on the card with a tiny bit of paper loss from being glued in a book no doubt. However, with that being said I think it's time in the book saved it from addition wear and tear and the couple creases that are on the card are very acceptable to me in regards to my collection. Thanks to an autograph of Phil's that I already have via a TTM, I am just a game used card short of my HOF hattrick. Guess I will need to keep my eyes peeled for one of those!
Posted by Pro Set Cards at 8:54 AM 5 comments:

Well it was a great ride while it lasted but sadly the Albany Devils couldn't find some game 7 magic and steal one away from the Marlies. I still find much solace in the fact that the future in bright in the Devils organization and with another high first round pick I can see us continuing to grow as an organization. Here are a couple more Seversons! 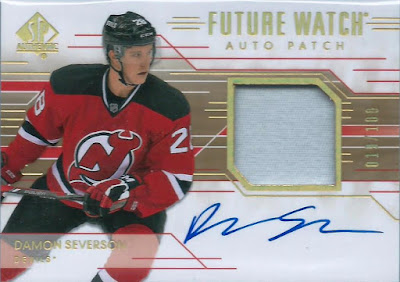 Plain white patch, I know, not the most appealing of the patches but still a solid card in my opinion with a really nice holofoil touch. 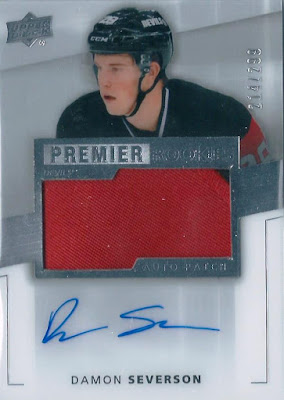 Without a doubt my favourite 14-15 release. This is one of two copies I have of this card. This is the lesser of the two but still has a hint of two colours and features a mixture of swatch, acetate, foil and paper. Stay tuned for the second one I have of these, its a beauty and I will go in more detail on my interest in this particular set.

Thanks for checking in, sorry it's a quicky but sometimes that's all we have time for on either end anyway.
Posted by Pro Set Cards at 3:30 PM No comments:

I have mentioned this before but it is worth saying again, I love it when you pick up cards that seem rather irrelevant at the time and they suddenly become much more important thanks to a pick up in the player's play or a trade. IN this particular case, both are true. About a year or two ago I picked up this card because I thought the increased playing time in Montreal could make him a star. Sadly, that experiment didn't go so well and he was dealt to NJ where the increased playing time there seemed to bring out the best in DSP. 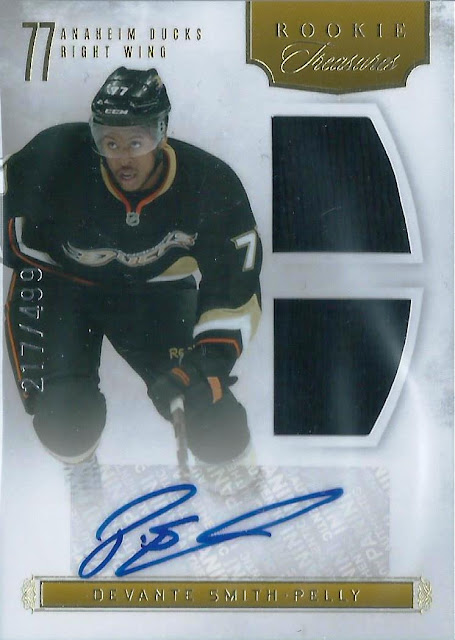 DSP got himself in a little hot water during his rookie year when it turned out many of his autographs were done with an autopen. Thankfully this isn't one such card so I do have a legit auto in my collection and after the 18 game tear he did in NJ, his signature should be worth a little more because he is a pending RFA so if the Devils are hoping to keep him I am guessing he will command upwards of 2 million per year on his next contract.

In his 18 games with the Devils he played a lot on the first line where he scored 8 goals and 13 points which I know it's a stretch to extrapolate that over an 82 game season but let's pretend anyway. If he could keep that pace over a full season that could mean 36 goals and close to 60 points. Now let's come back to Earth on our projections and if the Devils resign him and he can work the same magic, I don't think a 25 goal and 45-50 point season is unreasonable making him and this card a great pick up at a low price (Stefan Matteau and 4 bucks respectively)
Posted by Pro Set Cards at 8:38 AM No comments:

About 5 years ago I wrote Pernell asking for an autograph. Sadly he didn't feel I was worth the time or effort so I am not going to pump up his tires here either. 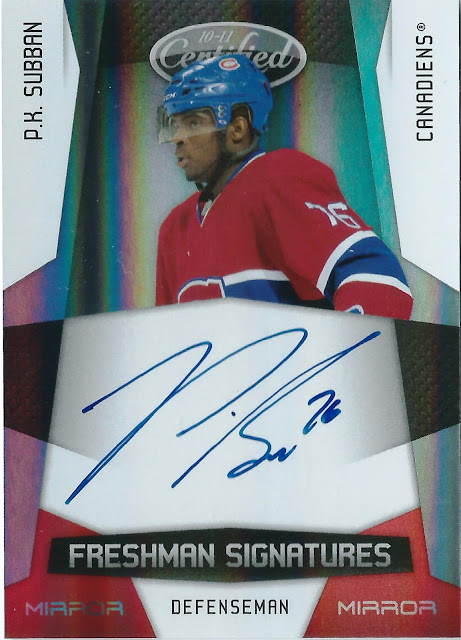 I may have lost the card and time I put into my TTM request, but in the end I got my auto regardless thanks to the internet and despite my bad TTM experience, I still like this card because its a pretty cool modern design.

A 6 pack of Severson

Well, Albany won their first game of the second round against the Marlies which was a huge road win. While Damon didn't factor in on the score sheet, he does have 5 points in 5 AHL games this post season and I am looking forward to an epic series.

Last summer while searching for my neighbour I found a lot deal on Damon Severson cards (all rookies). There were seven in all and here are six of them. The 7th needs its own post in my opinion so I will save it for another day! 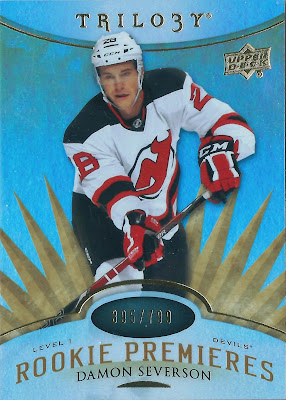 Here's the base of the base rookies. Even big names guys from this set can be had affordably for those who don't mind no auto'd rookies. 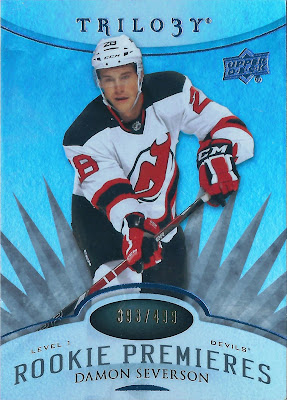 The blue parallel of the card above. Colour and numbering are the only differences, same photo is used between the two. 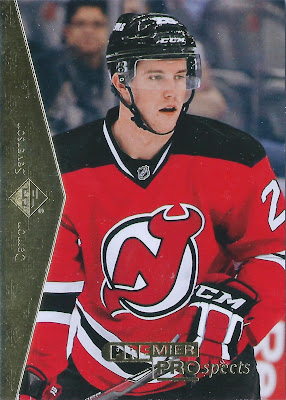 This is the non-die cut, non-autograph version. Despite that, still a nice card in person! 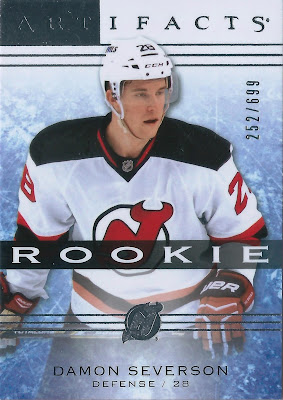 Here is a redeemed Severson Artifacts Rookie. It arrived already redeemed. I enjoy not having to wait for redemptions. 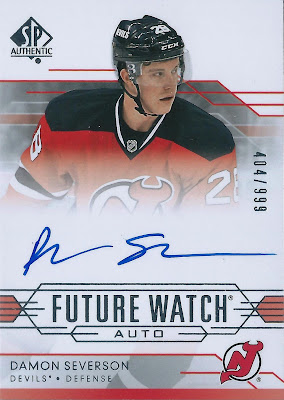 I never got terribly excited over Future Watch rookies and my guess is because I missed the time when they first came out and they are in a price point that usually means I can't afford a box or don't feel the risk is worth the reward. Never the less, I love me my auto rookies and this is a good one to add. 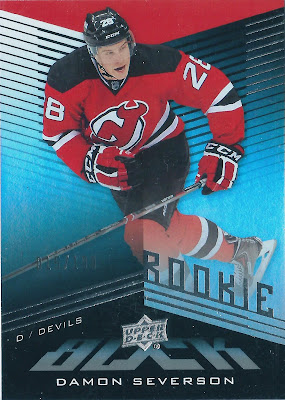 For a card without gimmicks, this one is pretty nice. A little thicker than your standard issue card and a pretty fantastic print run of just /199. This card wasn't my reason for buying the lot, but I assure you it added to my enjoyment of the lot purchase.

So a cool six pack for you all to look at, there was one more in the lot deal that I will share in a future post as well as a number of other Seversons! In the meantime, go Devils and thanks for reading!
Posted by Pro Set Cards at 3:08 PM 2 comments: