Not all is well in Newark

Well after a loss that is all to reminiscent of the collapse last year, one is left wondering if the Devils really have what it takes to make it far in the playoffs. It seems the Devils have been pretty hot and cold this season with very little in between, and this past month has been pretty frigid. It pretty much began with the lights going out and continued along the lines of playing in the dark!

It is difficult to really blame one aspect of their game, but defensively the Devils really have not been pulling their weight. I feel that if we are going to take a serious run this season, we need more than the return of Paul Martin. Martin has been out since game 9 of the season with a fractured arm which had not healed correctly so he has had an extended stay on the IR. I feel we should either use this time to help groom some young talent like Corrente or Eckford and along with some of the other youngsters build up some experience and see where it takes us or make a move for a veteran d-man (and I don't mean another Havelid).

Fact of the matter is, the status quo is really not an option as the second half of the season progresses and the biggest difference that Lou can make will be on the back end. Time will tell if we will be contenders or pretenders for the 2010 Cup. 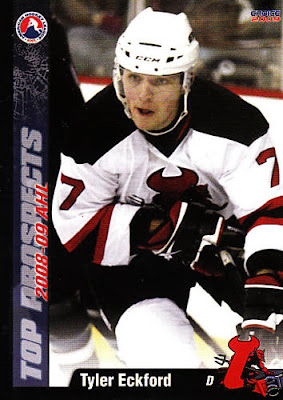 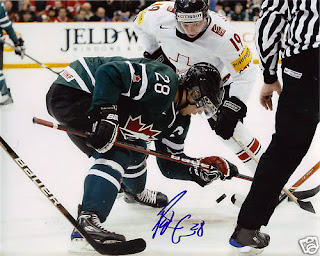 Well after the hit yesterday, I must say his future is no longer as bright. I am a Devils fan and have been since 1987. I try to keep tabs on all the prospects and I quite enjoy watching them progress and in some cases turn into full time NHL employees. Cormier (Drafted in the second round) I have been watching for the last two seasons, and this past Christmas, he was the captain of Team Canada at the World Junior Championships.

I was initially very excited he was given the honour of being captain, many previous WJC captains for Canada have gone on to accomplish great things in hockey. His performance however, was not what I expected. He played with a bigger chip on his shoulder than usual and as a result it lead to many dumb penalties. I can't speak for what he did do in the dressing room, but his on ice actions really weren't as dominating as I had hoped.

Now fast forward to this past Sunday, and the hit on Mikael Tam.

IF you have not seen it yet, here is a link, it is a little hard to watch for some....

As you can see, Cormier definitely gets an elbow up on Tam and pretty much knocks him out cold. The hit was undeserved and Tam really did not have a target on him. Tam is a defenseman who for all intensive purposes is NOT a superstar and is currently undrafted.

My concern first and foremost is for Tam to recover and continue a normal life. My second concern is for the mental well-being of Cormier. I feel this situation could scar him both in front of the media and psychologically much like the Todd Bertuzzi incident.

I feel this situation is not much different than the Bertuzzi with really the only difference being Steve Moore had apparently had a target on himself at the time for his dirty hit on Naslund. The suspension Bertuzzi received was swift and deserved and with Cormier's situation being as equally grotesque I can't see any situation where Patrice is not suspended. The only questions left will be how long, and will he return a shell of what he once was like Bertuzzi.

When Todd returned from his suspension, he never really dominated the play again like he once did. He still continues to play, but is not the game impacting power forward he once was. Patrice plays a very similar game, and even though he never put up enormous numbers in Junior, Patrice I felt had great potential to be a solid second line power forward, but now time will tell the result of this dumb and reckless hit.

Posted by Pro Set Cards at 2:18 PM No comments:

So I was in my local card shop the other day and I decided to pick up a pack of 08-09 Artifacts hockey. Not the first pack I have ever picked up, I did score a pretty sweet 1 of 1 rookie from this set a few months back, but I thought I would take my chances on maybe getting a Stamkos or something cool. At 13 bucks a pack with taxes thrown in is a little costly, but they guarantee a "hit a pack" so lets dig in. 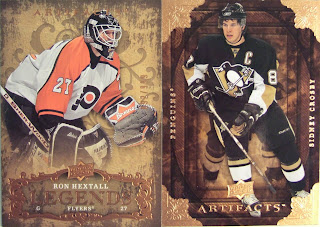 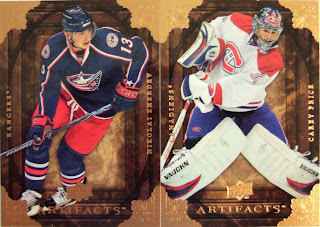 As you can see, each hobby pack contains 4 cards, and in my case a really large plug. Each card is nice, with a good layout, and the four corners have a bronze foil. They cards have a look of a premium set, and the backs of them have the usual stats as well as a small write-up. I am a little disappointed that the Price and Crosby both came out of the pack with nicks on the top, and in fact this isn't the first time I have seen that from an Artifacts pack. My "hit" was the Legends Ron Hextall card numbered 892/999. I am not sure if I would call this a "hit". I like Ron and he had a wonderful career and was a huge influence on my favourite goalie of all-time Martin Brodeur, but most of those legends cards really aren't anymore valuable than the base cards. Some might argue, my damaged Crosby was the actual hit. In all, they are nice cards, the set is small if you don't include the SP's but to try and do a complete set would be very pricey. Apart from some quality control issues, I really like the product, and they memorabilia cards are always pretty sweet with Artifacts.
Posted by Pro Set Cards at 7:53 PM No comments: