Next up is Dirty Bertie. The one award that was always out of reach for Bert Olmstead was the Lady Byng and I am more than sure he was fine with that. Every team needs a little grit and sandpaper to win a championship and it was safe to say Bert provided that service for the Habs. Bert would win four Cups in his career with the Habs and one more with the Leafs before retiring from hockey.

While Bert never lead the league in PIMs, he was never one to shy away from physicality or taking the occasional penalty. Bert was best known for being able to dish out hits with the best of them but he could also dish out passes and actually lead the league in assists in back to back seasons (1954-1956). 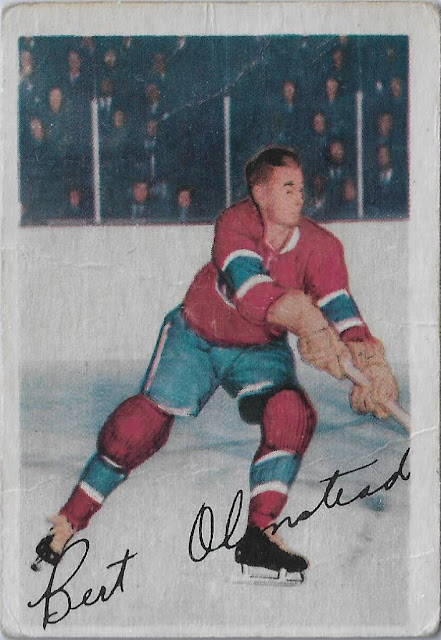 Bert has great colour like the last couple cards but a few more creases and some rounded corners. Based on the look on his face and body language my best guess is he's dished the puck off and is about to be hit by another player. 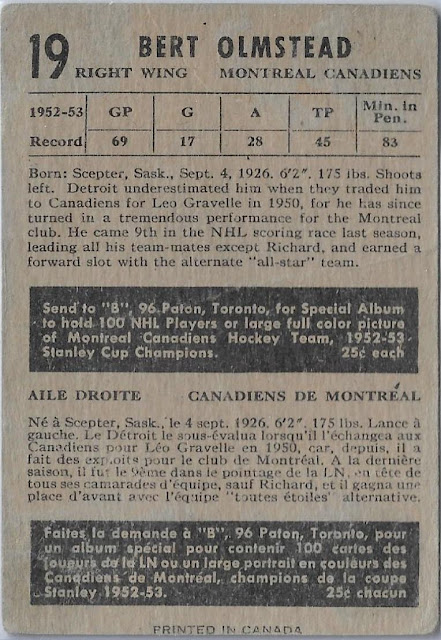 Here is the back side of the card which points out that he was traded to Montreal from Detroit. What is most interesting is that trade occurred during the regular season but he would never actually play a game in Detroit. He would start that 1950-51 season in Chicago and would be traded to Detroit in Dec of 1950. Then got flipped to Montreal about 17 days later in the trade mentioned on the back of the card. The original trade from Chicago to Detroit saw Bert being traded with Vic Stasiuk for Lee Fogolin and Steve Black. What I find neat about that trade is both players going from Detroit to Chicago are from my hometown (Fort William which eventually becomes Thunder Bay). Needless to say the best piece of any of these trades was Bert and I am sure both the Hawks and Wings may have regretted those deals eventually.

Eddie Sandford is a player who I didn't know much about before doing this post but afterwards learned that it takes many players to make a team successful and sometimes the best one on the team are the most reliable ones and reliability is what Ed Sandford always brought to the table.

Ed broke into the league in 47-48 at the age of 19 and would last 503 games and leave the NHL when he was 27. Each season he played except for one which saw him play just 10 games, Ed would score between 10-16 goals each and every year of his career. The highlight of his playing career would likely have been 1953 when he played in the Stanley Cup finals against the Canadiens. Ed had a career postseason which saw him score 8 goals in 8 games but unfortunately the Habs were just too much for the Bruins and they would win the series 4-1.

Eddie would play another couple seasons and eventually hang up his skates after a season split between the Hawks and the Wings. Eddie would rejoin the Bruins and work for them in a variety of different capacities. 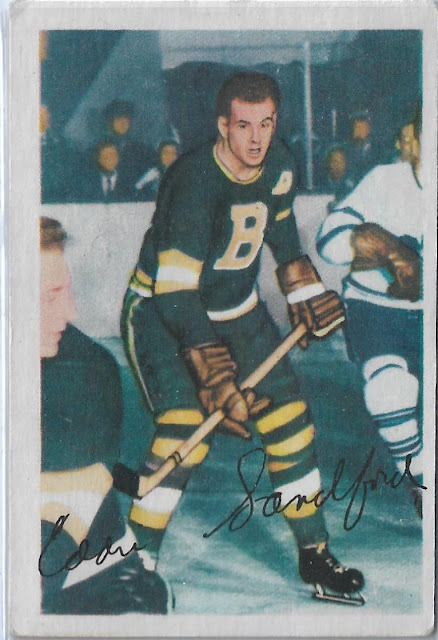 This card is sharp! Maybe not the corners, but the colouring and lack of creases make it a great looking card. I also love the action shot and the inclusion of a couple other players and a few folks in the stands. This really is just one beautiful piece of cardboard in my eyes. 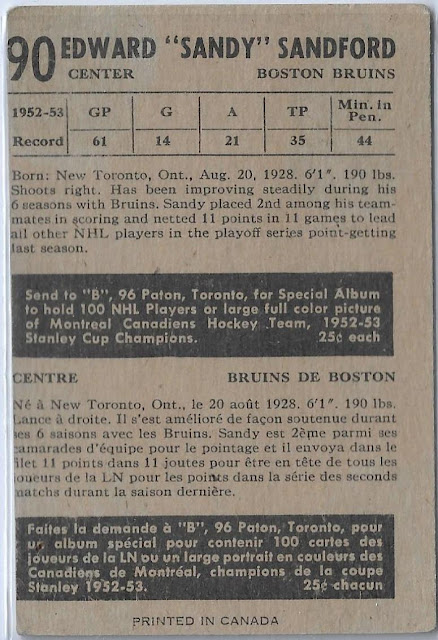 Here is the backside. As you can see it is not the best centering but I assure you it is at least cut straight. My scanner and the penny sleeve the card is in created a bit of an optical illusion here. Thank you so much for stopping by! For all those out there who care, Happy Canada Day!
Posted by Pro Set Cards at 10:52 AM No comments: