The Other Phil Esposito Rookie


A while back I shared with you one of the bigger pick ups I have had in recent memory and that was my Phil Esposito Rookie. The card books at a whopping $400 usd in Nr Mint condition however, when it is found in the shape mine was in with a crease or two and some tiny paper loss it was very affordable but still nice on the eyes. According to most guides that represents his only rookie card. However, there was another Phil Esposito card released that year with the 65-66 Coca-Cola Set.

While it isn't an official rookie card, I have a slightly more liberal definition of the term and would definitely consider this card his OTHER rookie card. The condition of this one is much much better than my other but still has some rounded corners (2 of them) but much like the other card is very easy on the eyes. The book on this one is $40 dollars in Nr Mint condition so if you are looking to add a Phil to your collection from his rookie year this isn't a bad choice and won't break the bank. I believe I spent about 12 dollars in total on this one and it was definitely worth every penny. 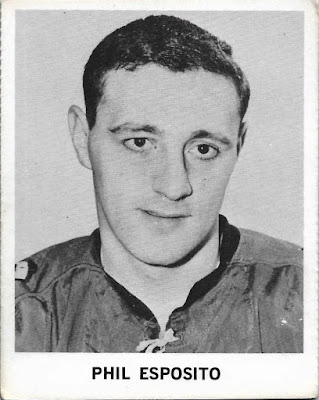 Here is the front. Like all cards from this set, they are b&w photos but look very nice in person. I really like the fact that it isn't a canned photo that you've seen on countless other cards before hand and is unique to this set. This is my third one from the set with Howe and Delvecchio being my first two. 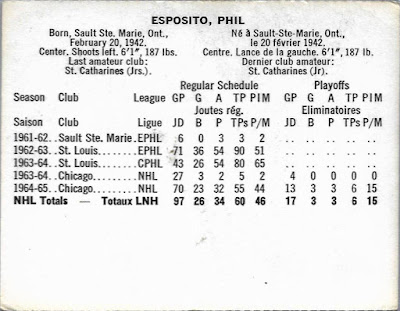 I still love the back side of these cards. So much statistical information unlike the Topps version of Phil's rookie. Both minor, regular season and playoff stats plus some vitals make these cards winners in my eyes. I would love to try and build this set someday because I believe it would definitely make a beautiful set once completed and placed in a binder.

Anyone else out there chasing this set or have it already? Are there any food based sets out there that spark your collecting passion? Thanks for stopping by and Happy Birthday to Wayne Gretzky!
Posted by Pro Set Cards at 9:47 AM 13 comments:

A Pair of Rookie Surprises

A while back I erroneously thought that Kasperi Kapanen would have a break out season. Maybe I was caught up in his playoff performance or maybe I felt the Leafs would be much more of a juggernaut than they have been. Either way, his 10 goals in 22 games is impressive except that's all been in the AHL. Nico Hischier has been everything I hoped he could have been and maybe a bit more but that's not a surprise. Jesper Bratt has been an excellent surprise and I can't wait for Series 2 to drop so I can chase him there. Brock Boeser has had an excellent season but much like Keller this too was expected but you could argue he certainly has exceeded expectations.

Two guys that definitely might not have garnered much Calder consideration before the season have had great first halves and they are Danton Heinen and Kyle Connor. This past weekend I returned my recycling and got a whopping $9.75 for my troubles and was able to cash in at the LCS and land these two babies with those funds! 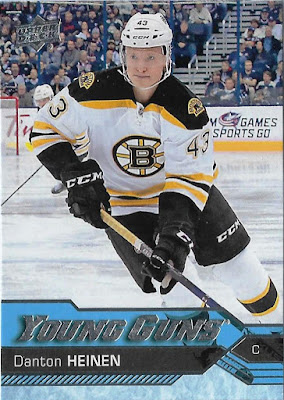 Let's start with Danton. Danton was one of those junior players who didn't play at the highest level and was a star for his team. Then went off to College in the States to hone his game and payed his dues with a season in the AHL. Now at the age of 22 he's matured and fine tuned his game to have NHL success. After 36 games he has 10 goals and 30 points. That's pretty impressive for a player picked in the 4th round in the 2014 draft. Both him and Arvidsson were picked in the same round that year. If he is able to keep this pace going he will finish with 22 goals and 65 points in 78 games which would certainly please any Bruins fan I am sure. 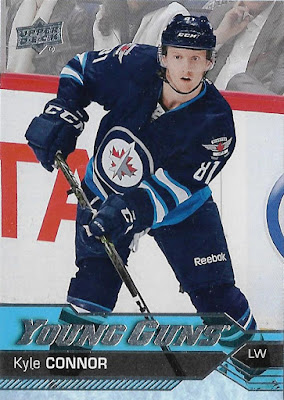 Kyle arrived at the NHL via the USHL and one year of College. Much like Heinen his is an older rookie but not Makarov old (21 years to be exact) just more experienced than your average rookie. Kyle did have the benefit of a pretty long stint last year which saw him play 20 games and put up 2 goals and 5 points in that time. This season has been a success thus far with him putting up 15 goals and 28 points in 38 games. This would have him on pace to net 30 as a rookie which much like Heinen I believe exceed the expectations of many given the depth the Jets already have at the forward position.

Time will tell if these players are true stars or just Ken Hodge Jr. flashes in the pan. Given the fact that Connor was a first round pick I could see him being a long term star who is a consistent contributor on the power play and second line for the Jets which only makes them that much more lethal with Laine, Scheifele, Little, Wheeler and others in the line up already. Heinen also has a great deal of potential and perhaps he will offer a yang to Marchand's ying for the next number of seasons and when you mix in Patrice and Pasta the Bruins will climb back to the top where they once occupied. Either way, it seems there has been a massive influx of young talent over the past three seasons and I can't remember a time in the last 20 years where hockey was this exciting to watch!
Posted by Pro Set Cards at 12:00 PM 8 comments:

Another Case of Cards Becoming Relevant

About 2.5 years ago I bought a couple boxes of 13-14 Contenders when they were being blown out and felt I did pretty good on those boxes. Some cards were surefire hits like a Malkin auto /25 which I would eventually trade away and others were sleeper hits. A couple that was a long-term dormant were these two cards. Recently my team traded away one of my favourite Devils of all-time Adam Henrique and the return was Sami Vatanen. While we gave up lots, I understand why we made the trade but at the same time we as a club haven't been quite the same in Henrique's absence and I can't help but think it has partly to do with the team missing what he used to bring to the dressing room.

With that being said, the Sami has been steadily improving and looking more and more at home with each passing game and I believe in the long term it probably will be viewed as a good move especially given Adam could always return once he hits UFA status in 2019. 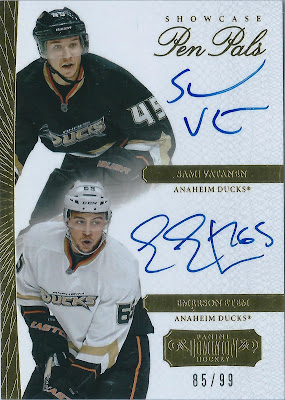 Even though this card says it is Dominion, it was pulled from a box of Contenders. Features two on card autos, one of Sami Vatanen and one of Emerson Etem. At the time I thought Emerson could offer a great deal of potential for this card but it appears his career is pretty much done in the NHL/AHL and Sami is getting top billing in my opinion on this card. 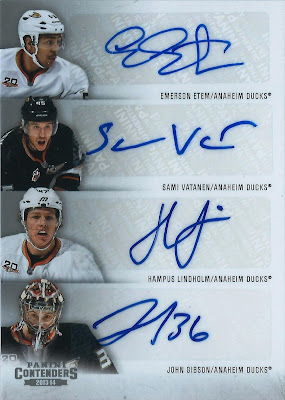 The second Vatanen auto came on this card which was pulled from the same box. This time, he is joined by Lindholm and John Gibson as well as Etem. Three out of the four have adapted well to NHL life and that makes this card a solid one for the collection. Having Sami on the Devils just adds that much more to it in the cool factor department and truly makes it a winner.

I did actually pull a third Ducks auto from the second box and it was a quad booklet of Fasth, Etem, Rakell and Andersen. Only Rakell is still with the Ducks but Andersen has been doing very well for himself as well which makes it a pretty decent hit as well.

I certainly enjoy when cards in my collection become much more relevant due to trades but as with any trade you usually lose someone too and while Henrique is no longer with us, I will continue to enjoy the cards I do have of him in my collection and wish him all the success in Anaheim that doesn't impact the Devils but I won't likely be chasing any of his Ducks stuff in the future. Meanwhile Sami should make us a better team in the long term and I look forward to our Cinderella year continuing in the second half.

Do you have any cards that became much more relevant to your collection thanks to a trade or signing?
Posted by Pro Set Cards at 12:06 PM 4 comments:

I Just Wanted the Carl Yastrzemski With the Big Sideburns

One of my favourite episodes of the Simpsons is "Three Men and a Comic Book" where Milhouse wants to go to The Android's Dungeon to buy a Carl Yastrzemski card and is instead convinced to buy a Radioactive Man Comic #1 with Bart and Martin. As a kid who only collected hockey cards, I had no idea that such card actually existed and probably didn't until a couple years ago. Well along with my Randy Johnson cards I can also say I have a Carl Yastrezemski card with the big sideburns at work as well!

Being a Simpsons fan, baseball fan and sports card junkie I believed this card was a must have in my collection and being able to land it for about 2 bucks from COMC in amazing shape what more could I really ask for! 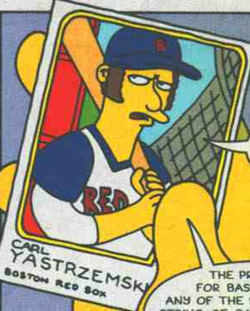 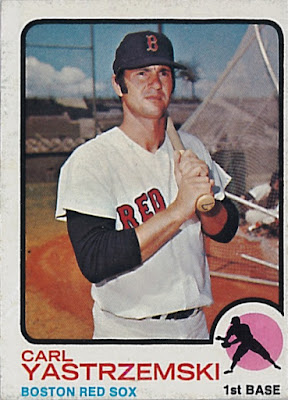 Here is the front side, check out those mutton chops! 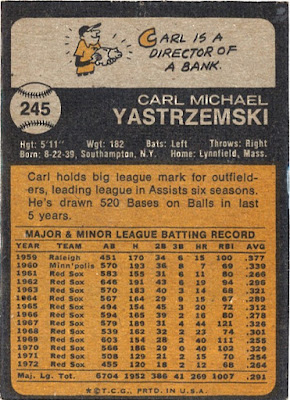 Here is the base side which is very neat for a couple reasons. First, Yaz was a stud at the plate, check out those numbers. Second, clearly they weren't paid much in the old days given he had a second job as a bank director!

When it comes to pop culture, I can't think of too many examples of sports cards making an appearance. There have been a few and for me personally, this one is probably the biggest that comes to my mind. How about you? Are there some cards that transcended into pop culture that are must owns or have cool stories? Thanks for stopping by and Happy New Year!
Posted by Pro Set Cards at 1:22 PM 11 comments: