10-11 ITG Enshrined is a product that I was been wanted and itching to break for a very long time. But things would get in the way or money would be spent elsewhere and sadly it never happened. With that being said, two posts ago I did pick up a Laprade auto from the set which turns out I bought not long after he passed. With that being said, I finally got my chance on my birthday to break a box of Enshrined.

Like most recent ITG products, they are without an NHL license so the focus is all on the player and not their club. But with that being said, this is a very very nice product. You get 5 premium base cards numbered to 175 and you get one hit which is an auto /49 or /1 or a game used card /9. Worst case is you can a HOF auto and best case is you have a super rare /1 cut auto of a player like Art Ross. So, how did I fare.... 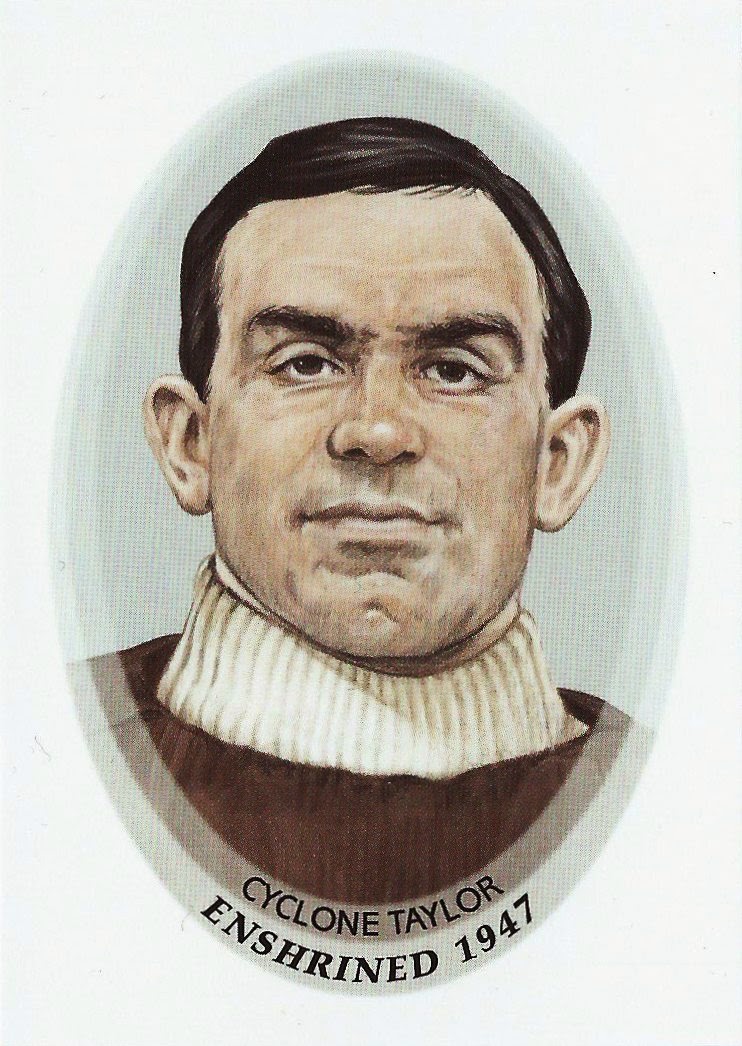 First base was Cyclone Taylor who is without a doubt one of my favourites from the first half century of hockey. The pictures on these cards are in colour and very classy. 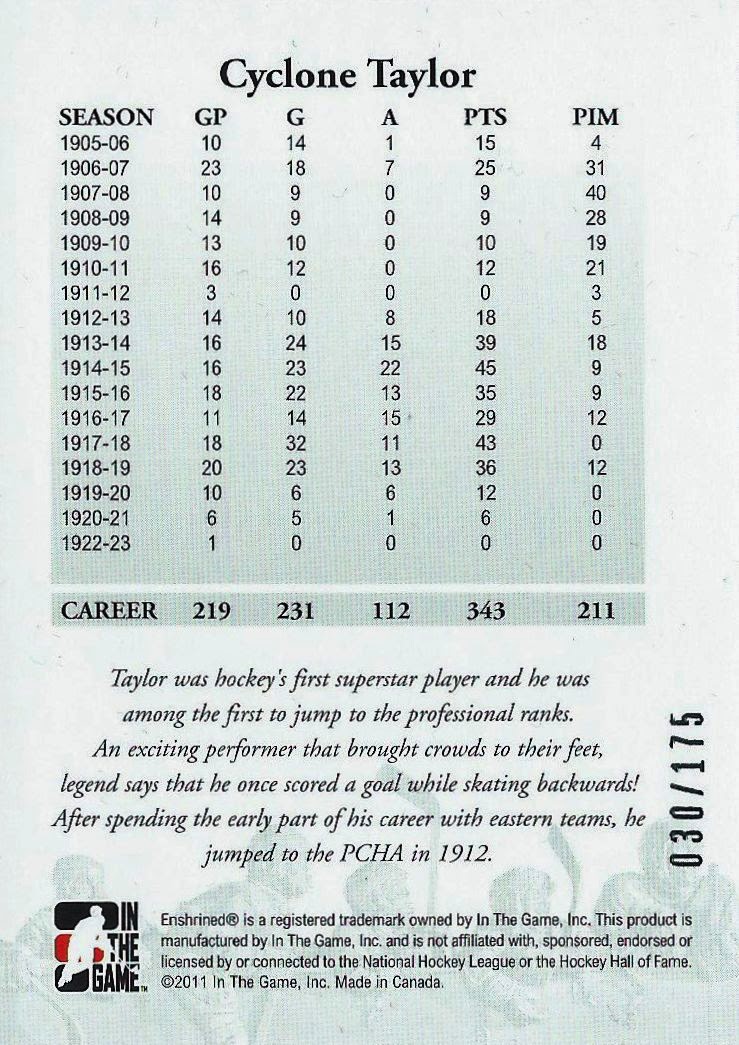 The backs are extremely well done with an embossed number job which ITG doesn't do very often. Look at that career. I would be curious to see what those numbers might have been like in a 50 game season. Very good start to the box. 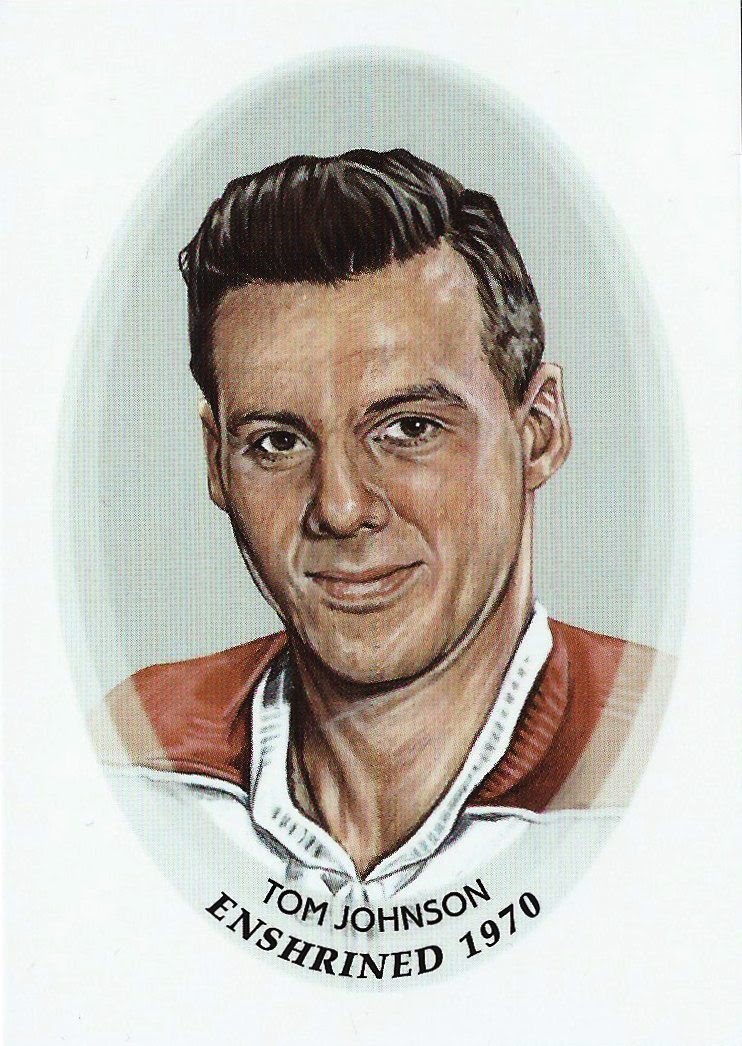 Tom Johnson is another great card. I have his rookie and his auto so landing this card was very fun. While it isn't anything special as far as my HOF PC goes, I do like having a HOF card like this to go with the rookie and auto. 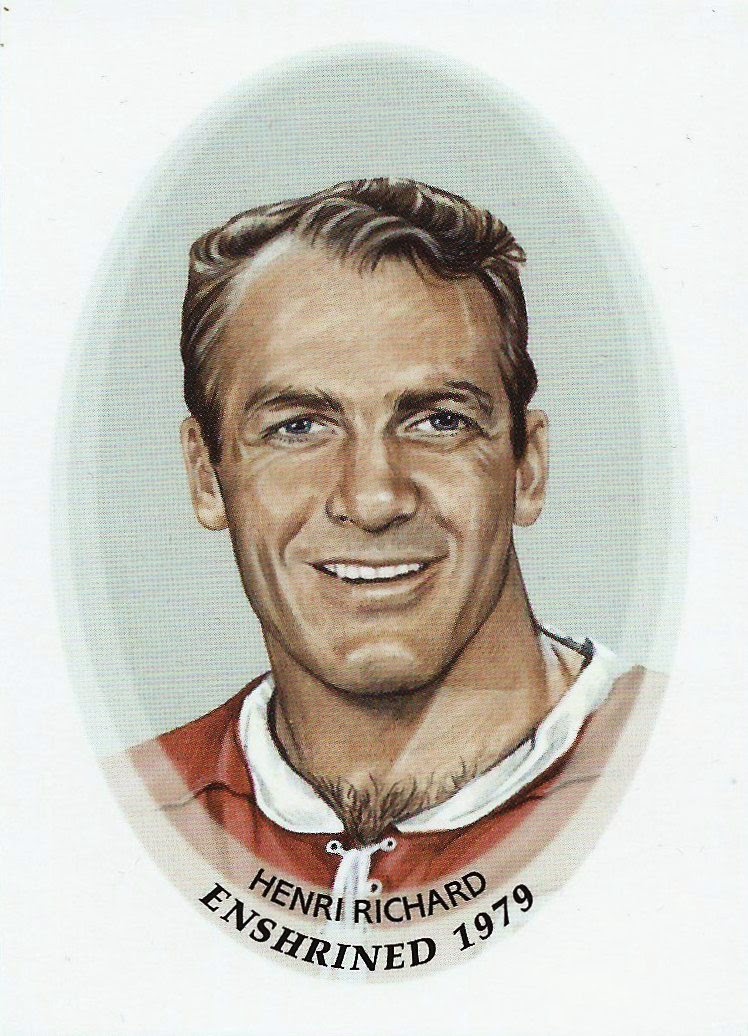 Now this was one of the cards I was hoping for. When I first saw these cards I thought they would be great cards to send off as TTM requests. The first two player I got are deceased but Mr. Richard is still alive so I sent this one off immediately in the hopes he may sign it. I will keep you posted on that one. 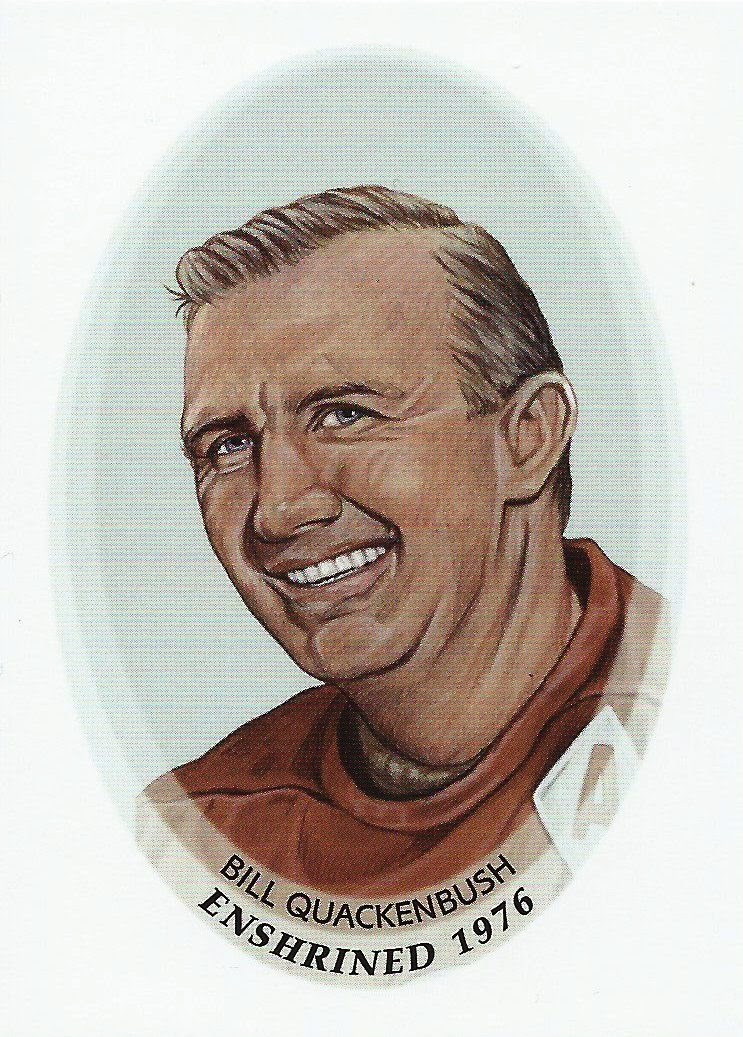 Sadly another player who has left us far too soon. This is a pretty nice card and you get a glimpse of his A on the jersey. Bill Quackenbush was a 5-time first or second team all-star for the Wings and Bruins. 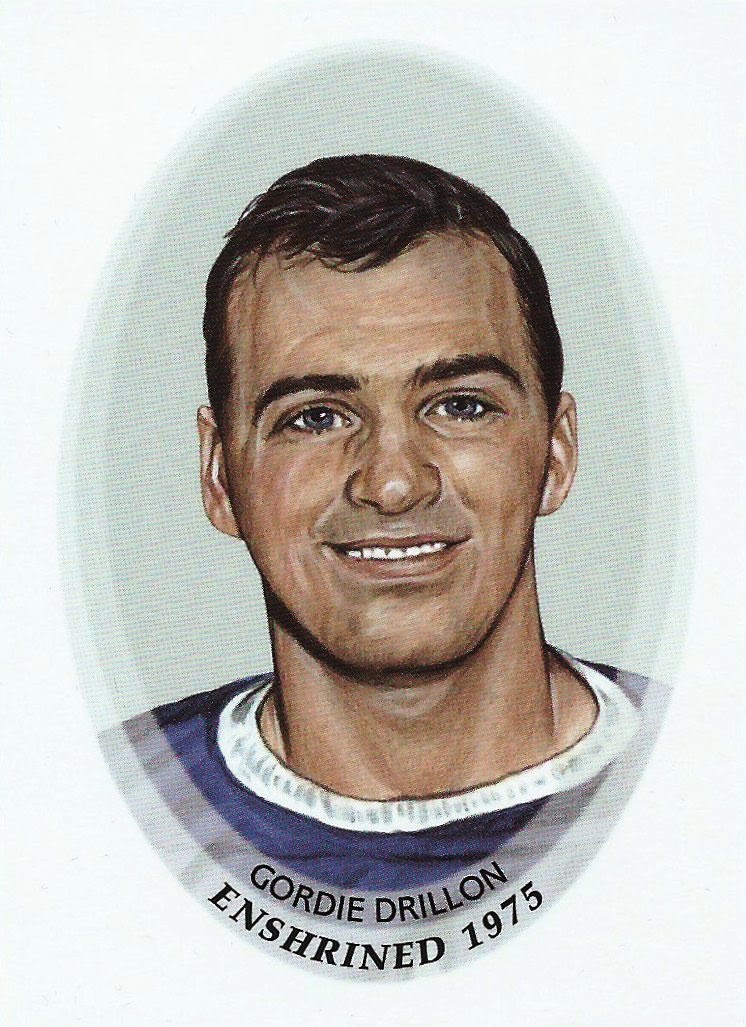 This one was a bit of a surprise because I knew nothing of Mr. Drillon. Turns out he was a pretty awesome player with a very short career. He did finish top 10 in the league in each of his 6 NHL seasons and then became part of the war and never returned again. He only has one card from his playing day and that is in the 37-38 OPC set and then one in the 55-56 Parkhurst Set as an Old Time Great. 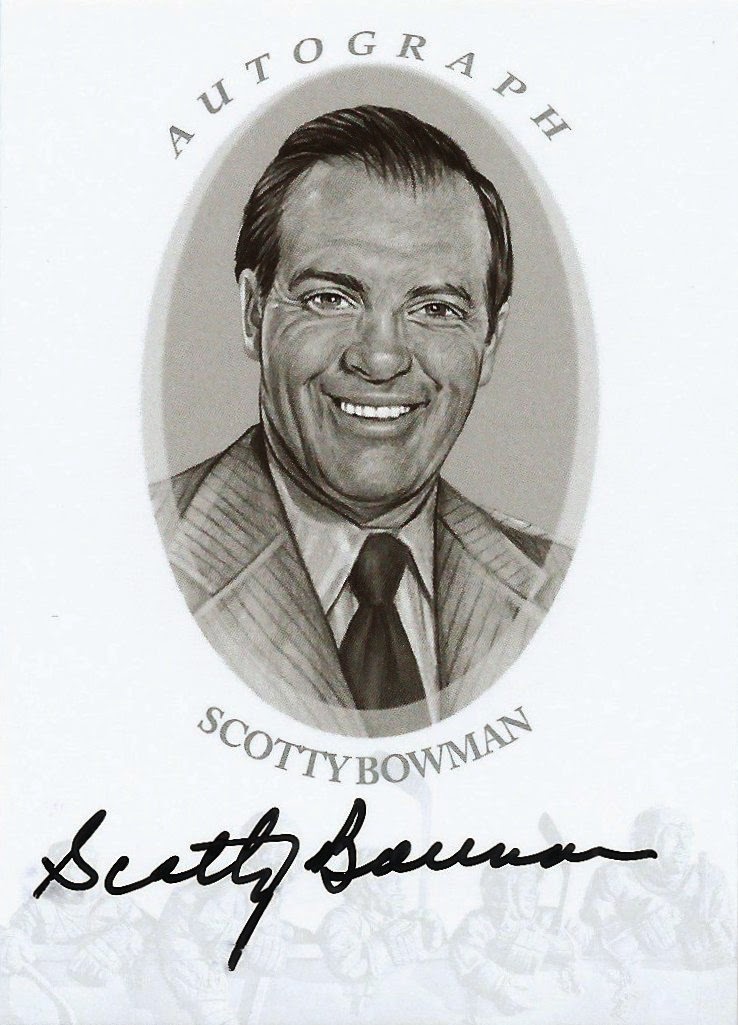 Scotty Bowman auto silver /49. I was pretty pleased to pull this card. I would have been a bit sad to have pulled someone I already had but in this case I needed a Bowman auto to complete my HOF trifecta. I already had his OPC rookie and I have this "game used " piece of Scotty and now an auto completes everything I could want or need for my HOF PC. For those interested in the product, that is an on-card auto and unlike the base cards the photos are black and white for the auto set. Very pleased with the box and I might consider another one in the future some day. However, in the meantime the itch to check out this product is gone and hopefully Richard will come back to me someday signed.
Posted by Pro Set Cards at 1:31 PM No comments:

Long over due thanks to Shane from Shoebox Legends

Like I mentioned in my past post, this is not the summer of blogging I was hoping for and even this thank you post will be a touch on the short side as Shane loaded me up with tonnes of cards and I will save some of the baseball loot for another day. With that being said, there was so much awesome in the package he sent I can probably spend 10 posts talking about it all. For today, I will focus on the 88-89 Devils Team set and an awesome rookie.

First up is the 88-89 Team Set. I didn't have any of these and after getting this one all I can say is I want more!!! Here are a selection of cards from the set. 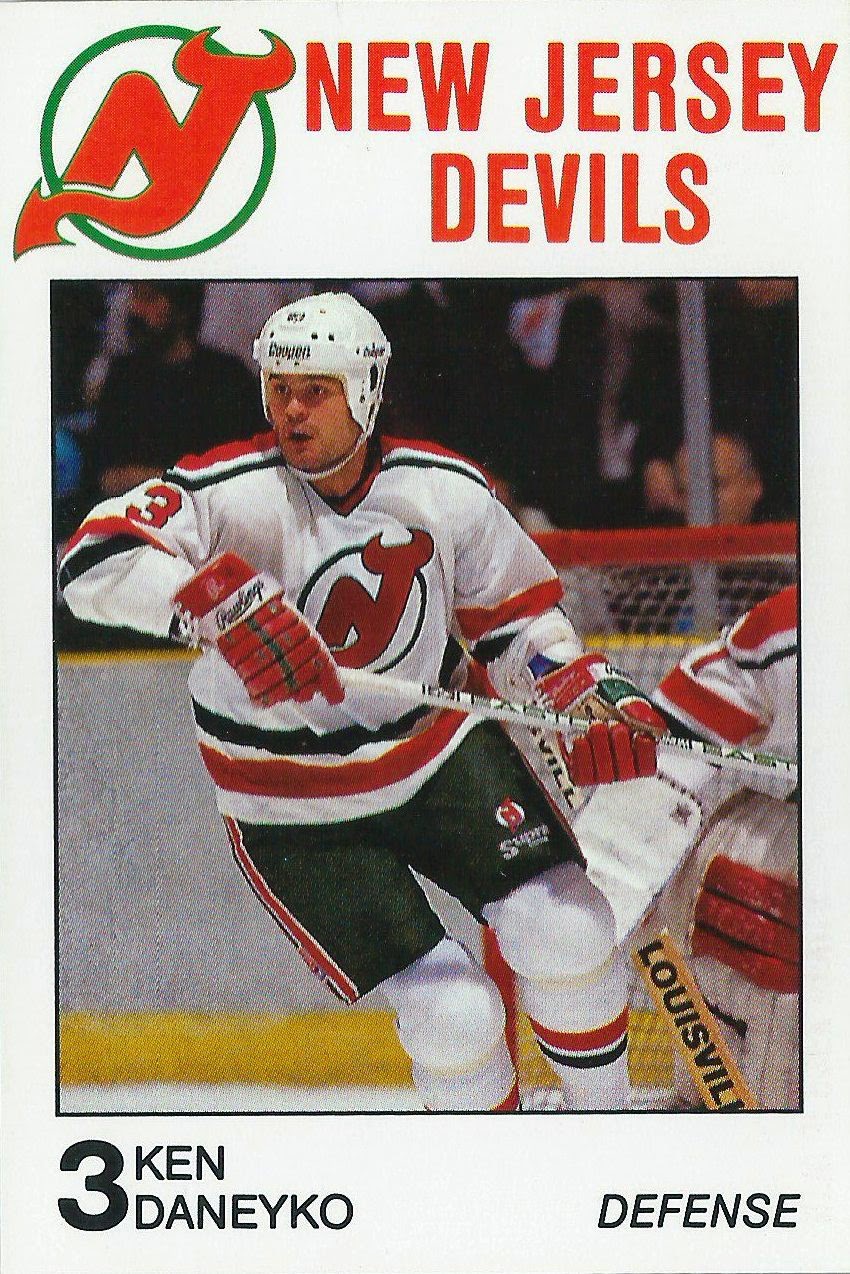 Ken Daneyko. If you were a real Devils fan then you always loved Kenny. Ken was a rugged stay at home d-man who didn't mind throwing down when he had to. Sadly he played nearly 5 seasons before getting his own rookie card in 89-90 OPC. This card predates that by a season. 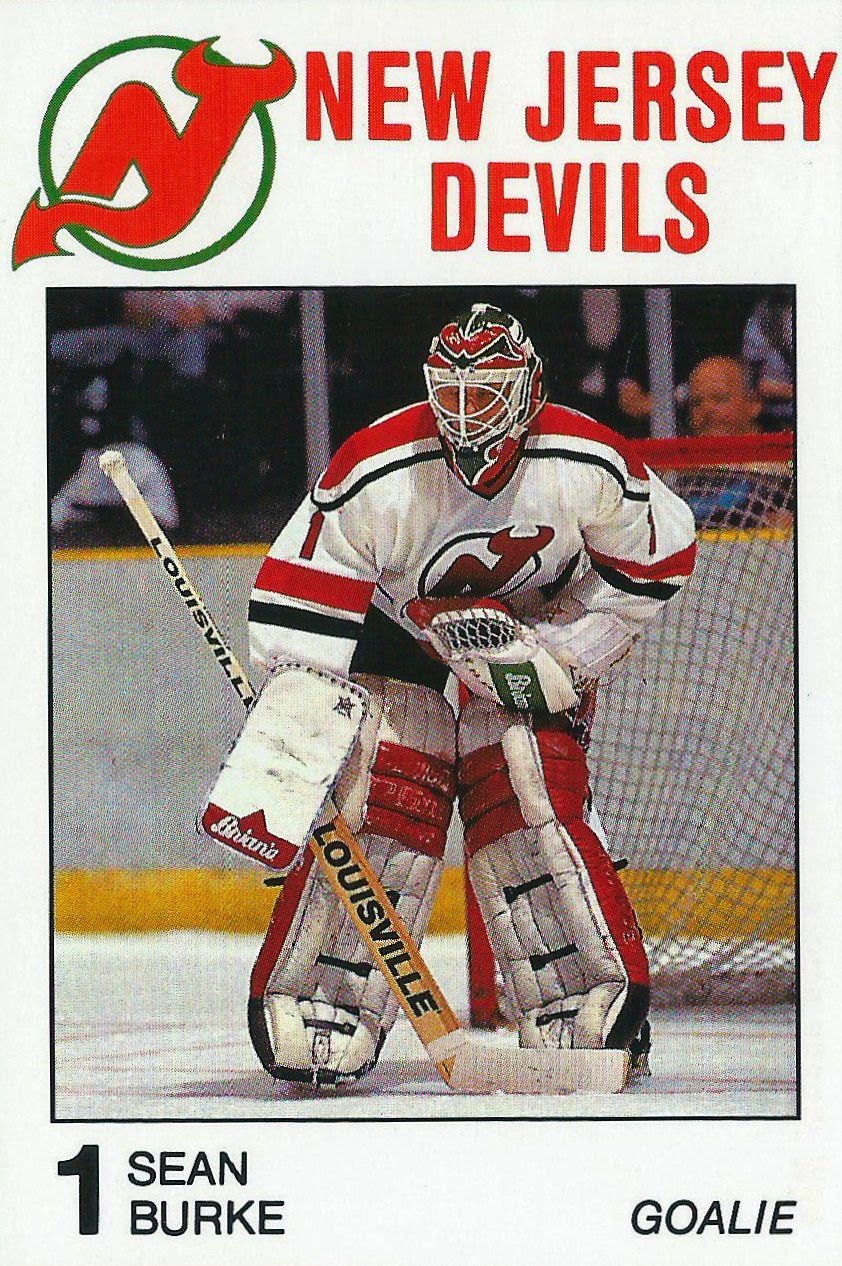 One of the reasons the Devils made the playoffs was the amazing play of a young goalie the Devils called up from the Canadian Olympic Team to lead the Devils on a historic playoff push that culminated in them clinching a playoff spot on the last day of the season against the Blackhawks. While they didn't make the Cup finals, it gave fans like me hope for the future. This is a "rookie" card of sorts since he also appears in the 88-89 OPC/Topps sets. 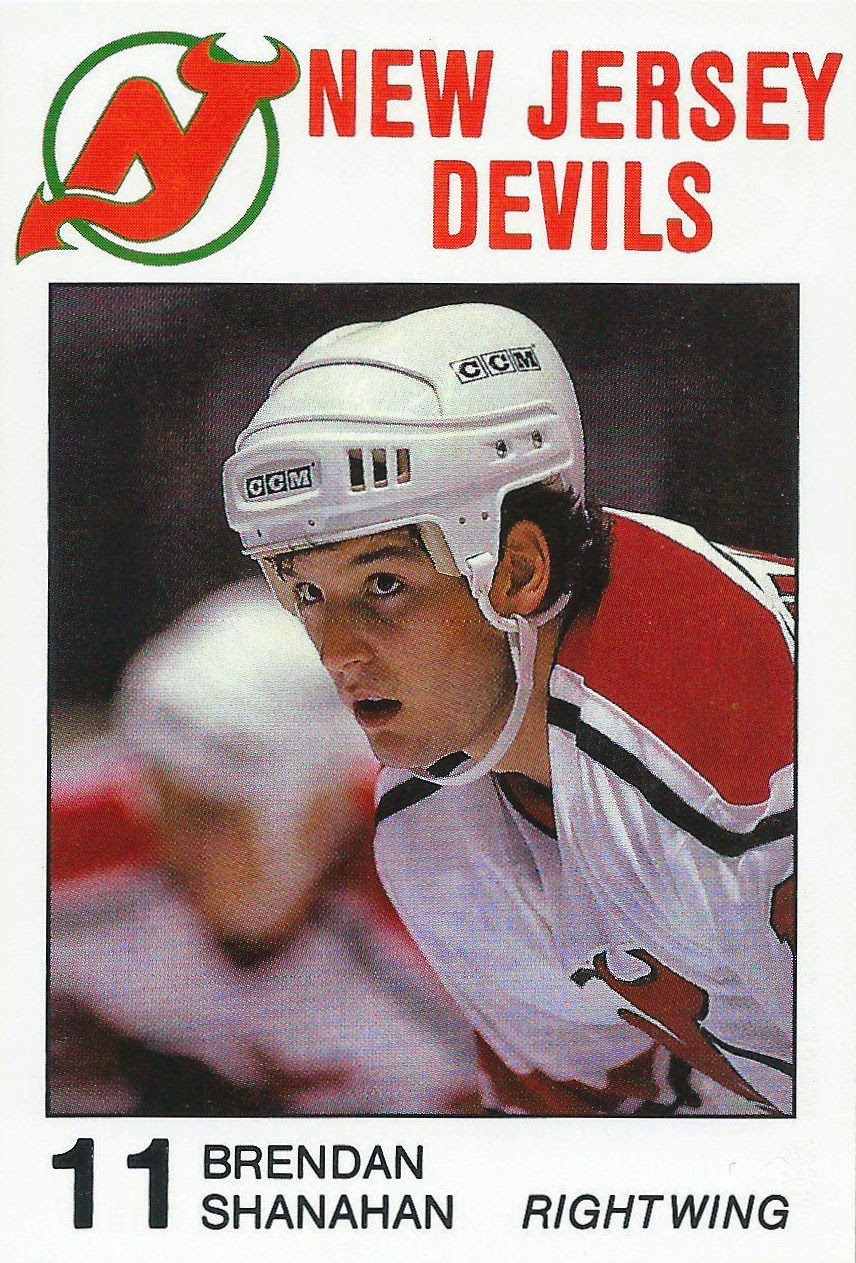 By most people's standards, the most important card in the set is this one of Brendan Shanahan. Like Burke, he was a rookie during the 87/88 season so this card coincides with is rookie release. What I really enjoy about these cards are the backs. Check out the back of this card. You get more info than you would on hockeydb! 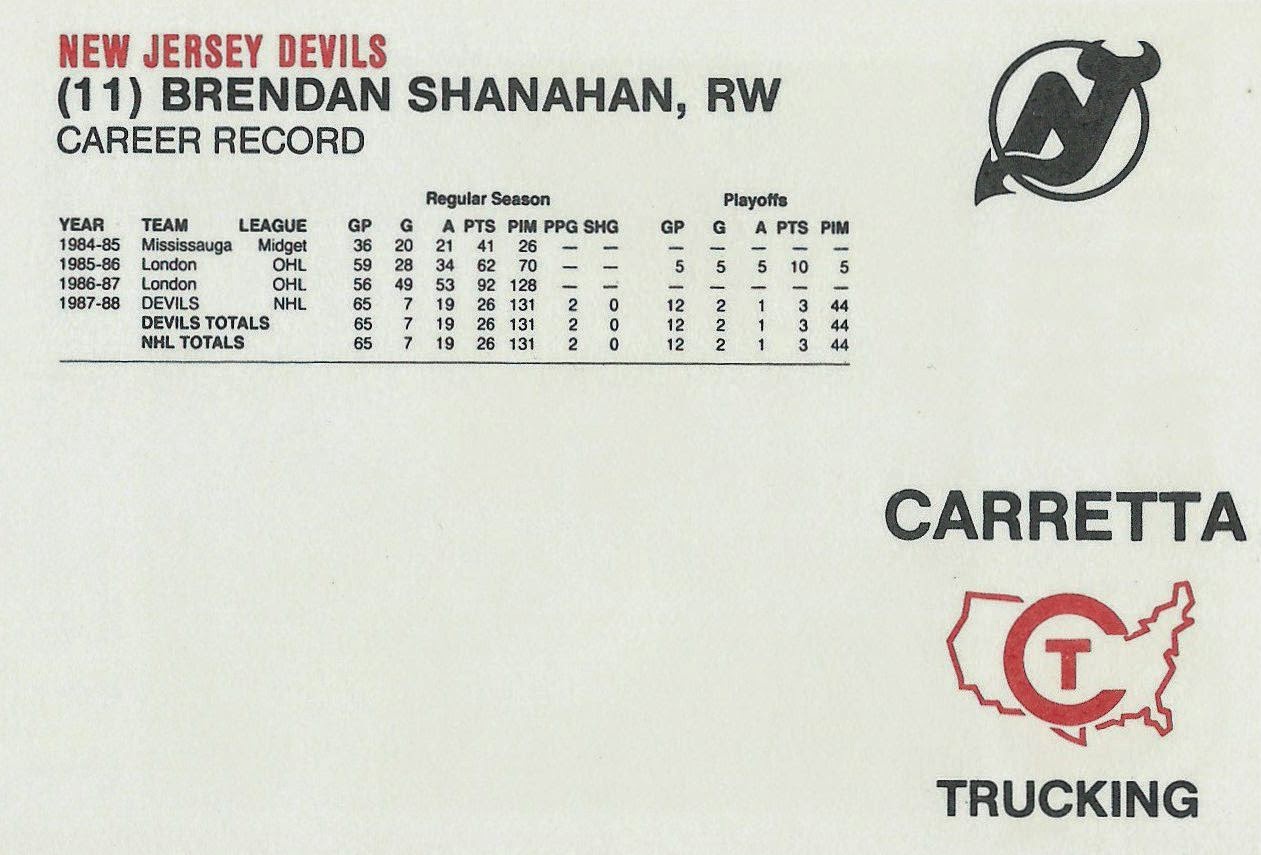 Most of these numbers are on hockeydb except for one season, his midget season. In fact all these cards include extra stats and fun info of the players and coaches. Truly an awesome set start to finish. 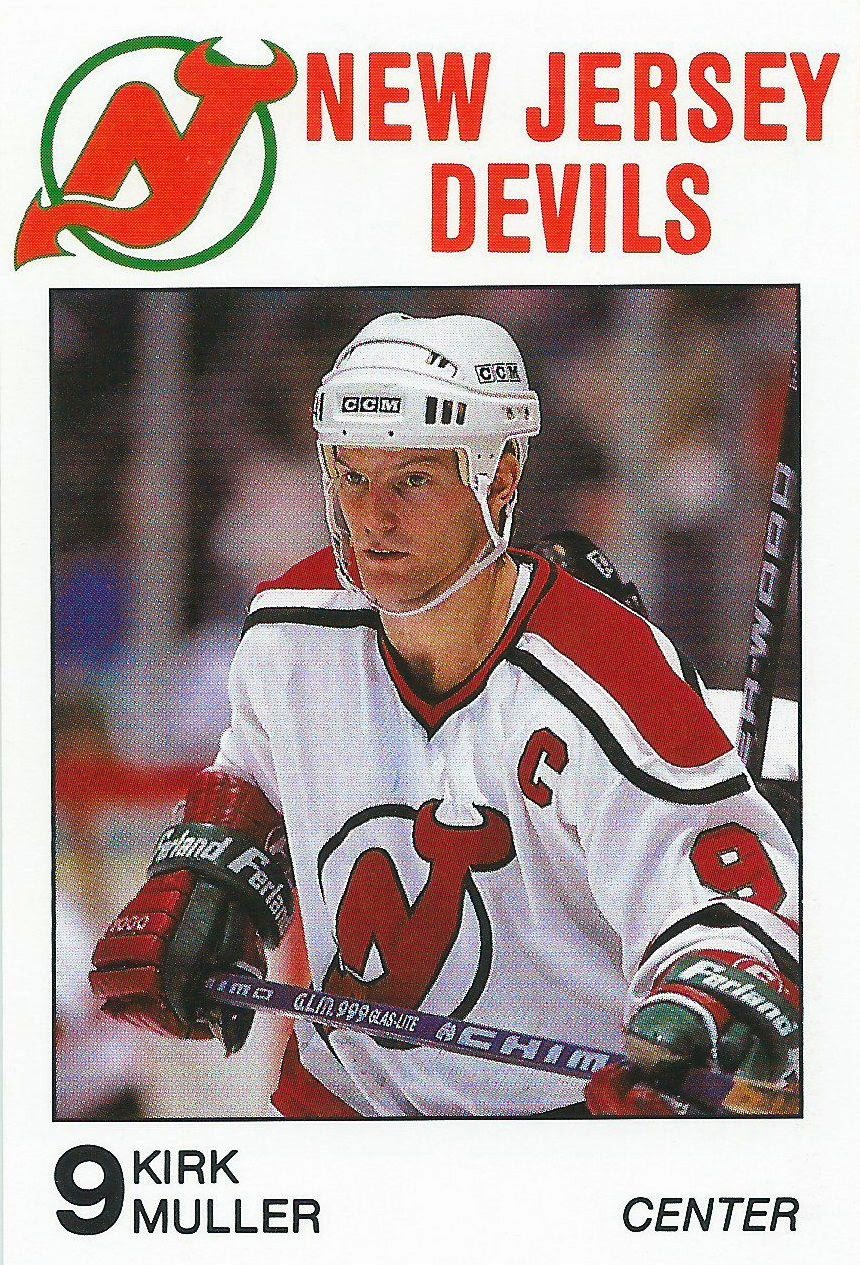 Captain Kirk! One of my more favourite players during his time with New Jersey. 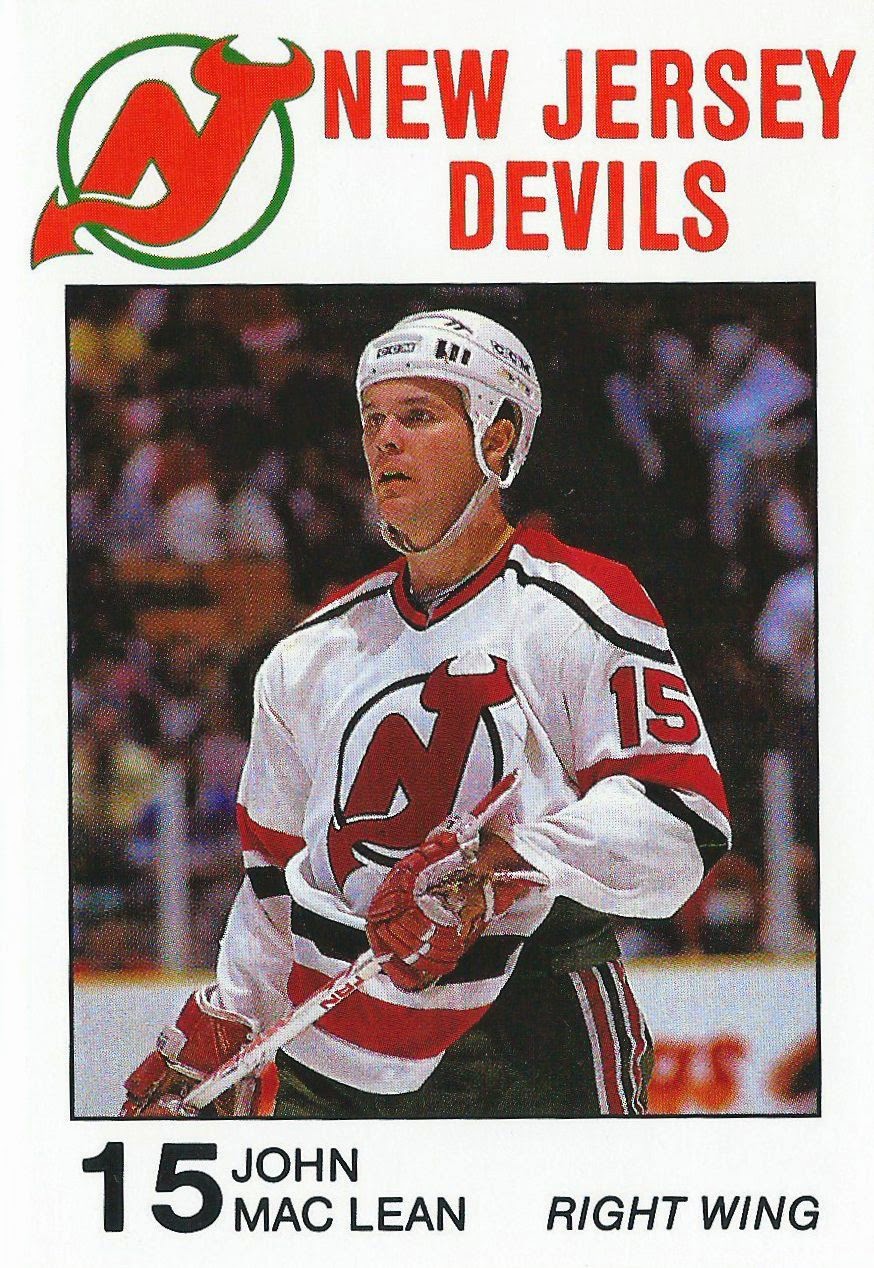 Here is one of my all-time favourite players! I hope he is able to find work in hockey again very soon. He has a great mind and has lots to offer the game of hockey. 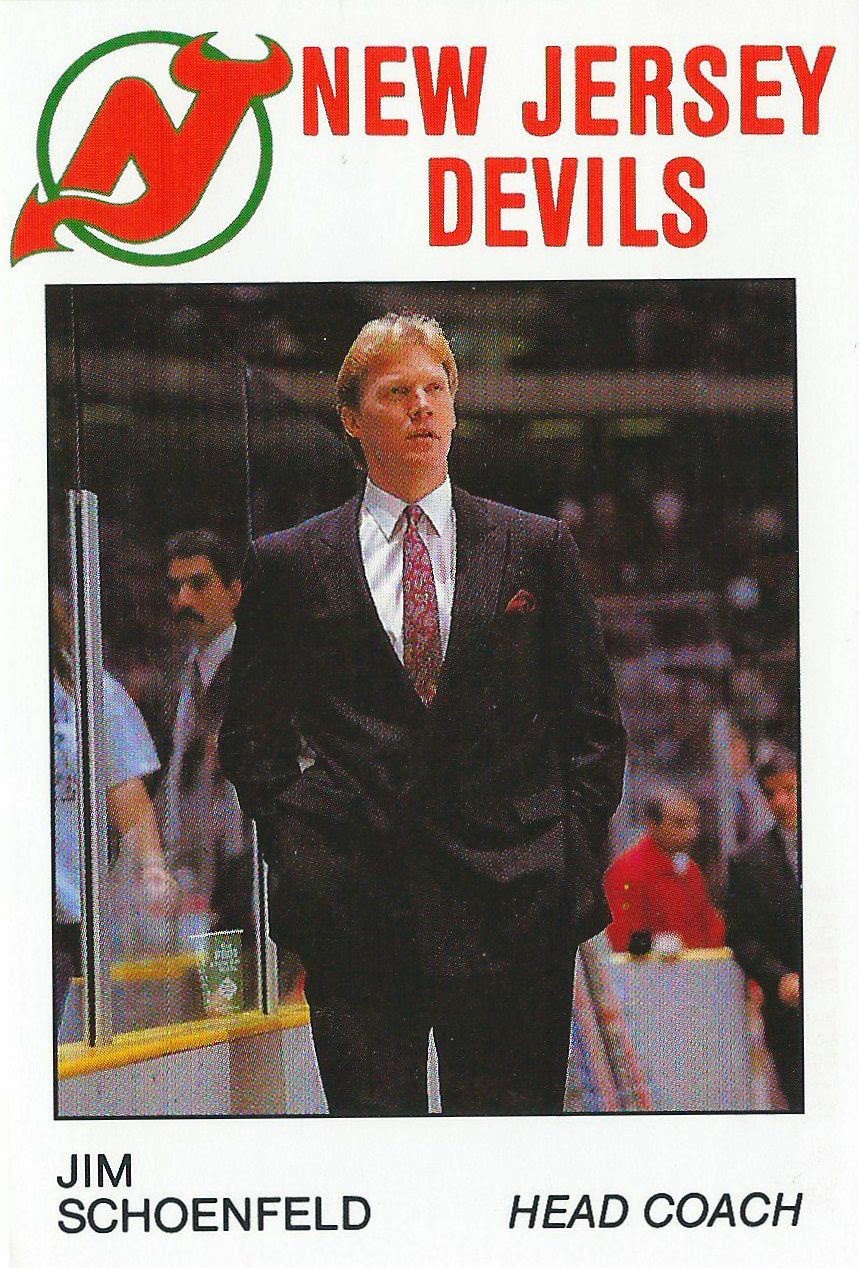 Ahhh Jim Schoenfeld. If you are in my age bracket or older you might remember his famous confrontation with Koharski. I thought he was a pretty good coach but then again I was just a kid and I don't have much in the way of memories of him as a coach. Currently he is the GM of the Hartford Wolfpack 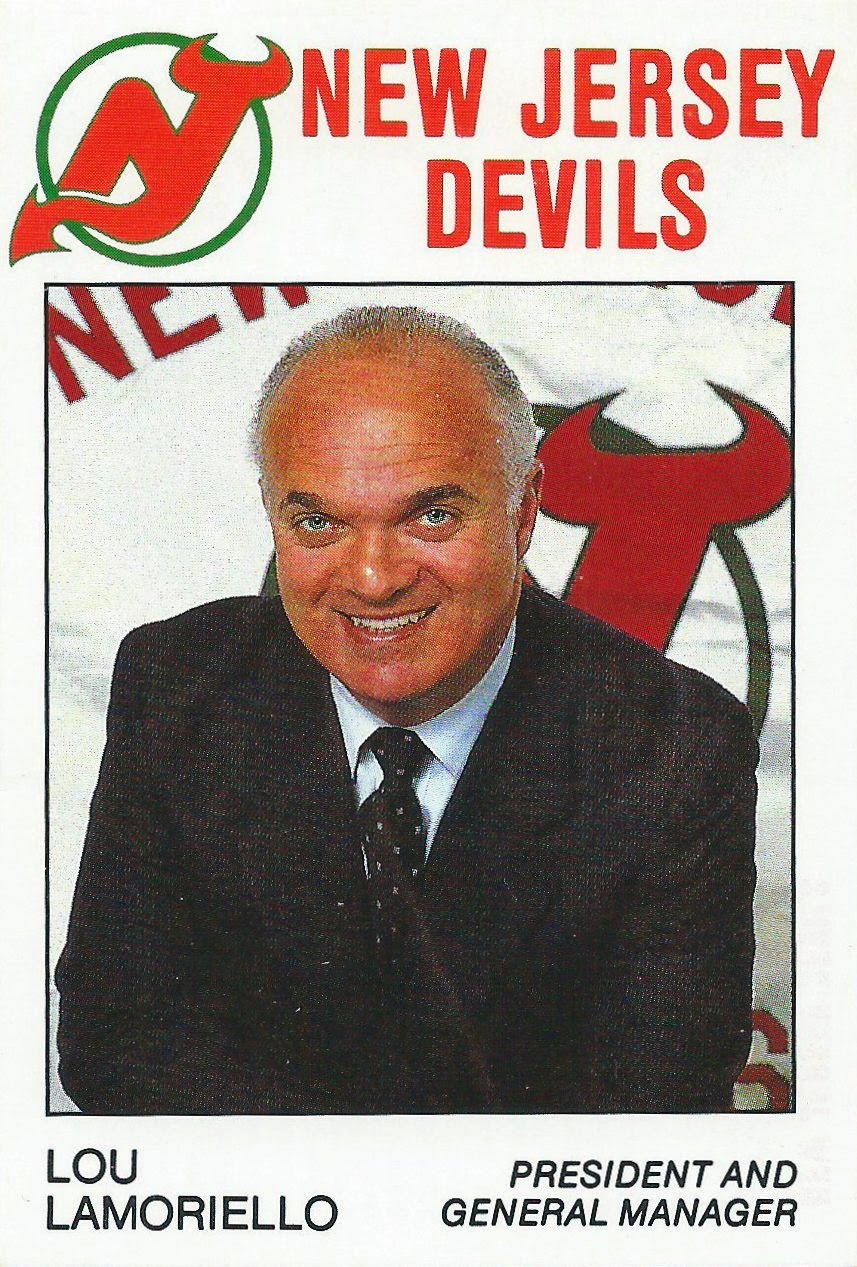 Here is a Lou Lamoriello rookie card! While the photo is creepy as hell, but I have loved his tenure with the Devils and he is one of the most respected GMs in NHL history. 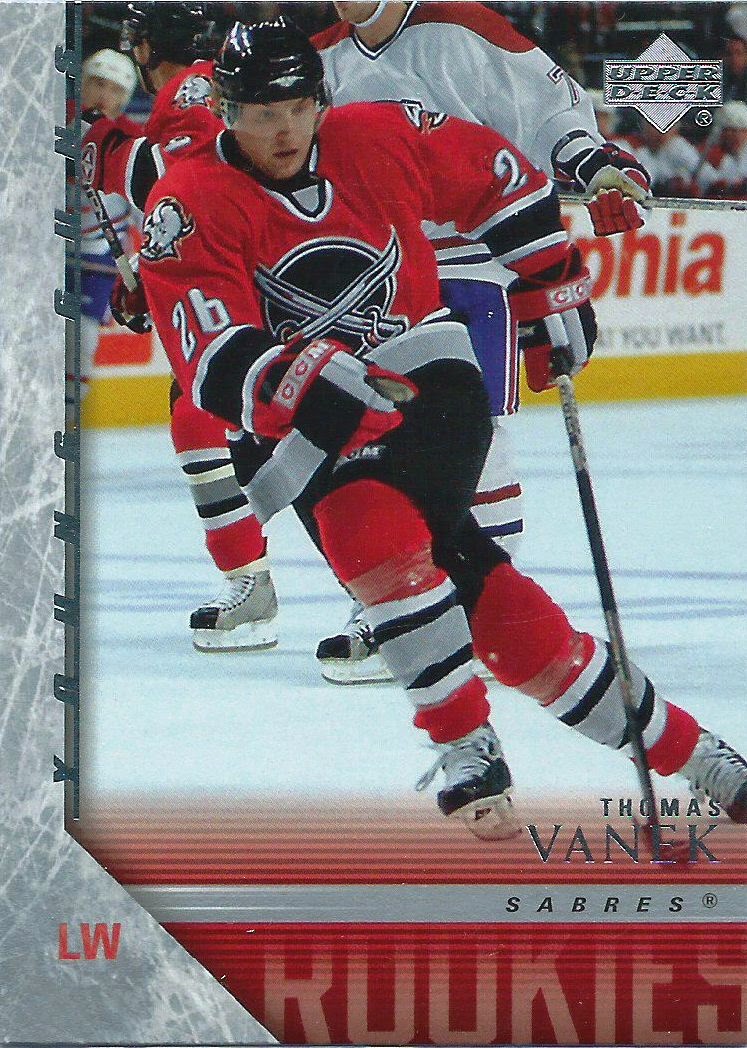 The last card I am going to share in this post is a card I have been wanted for a few years now. Like only Shane can, he managed to nail a big want without clues or even help. While many seem to doubt Vanek's abilities I see him doing very well in Minnesota and during that small window of opportunity I was hopeful the Devils might have been able to sway him our way. Sadly he left his heart in Minnesota and I wish him all the best.

Not the start to the summer vacation I was hoping for. Little to no time to post anything to start and then I have seemed to develop some numbness in my one hand that has lasted for over 2 weeks. Typing and writing certainly add to the numbness so I am sadly not going to be able to make a post a day like I had originally hoped at the beginning of the summer. In addition I have to push off my thank you post to Shane for another day or so because I just finished a TTM letter and I seriously can't feel much in a few fingers. 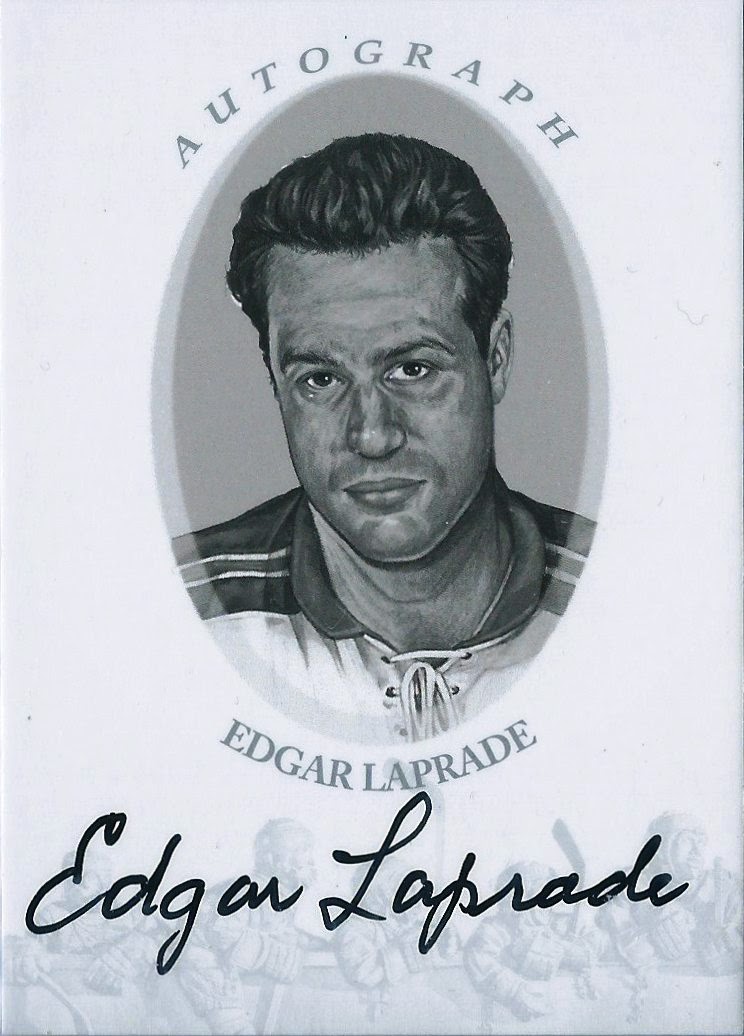 One of a couple certified Laprade autos out there and I missed out on this a couple times so I wanted to make sure I won. Well, fact is you can always win your card if you are willing to pay the most! Bidding on this card was at 99 cents for a very very long time (until about 6 seconds to go) then the prices jumped and in the end, my max was still enough to take it home. But looking at the bidding history there was one bid with 6 seconds to go and another with 1 second to go. Certainly glad I set my max long enough ago that I ended up with this gem and it goes well with some of my other Edgar autos (1 and 2) and his rookie thus cementing my HOF PC collection for him.

So next post my long over due thanks and then I have some birthday breaks to share including a couple boxes of 11/12 Contenders and a box of 10/11 ITG Enshrined!

Now for the auto portion of my break loot. In a box of Enforcers II you should get 4 autos and I had all the luck it seems nabbing 3 with my teams. 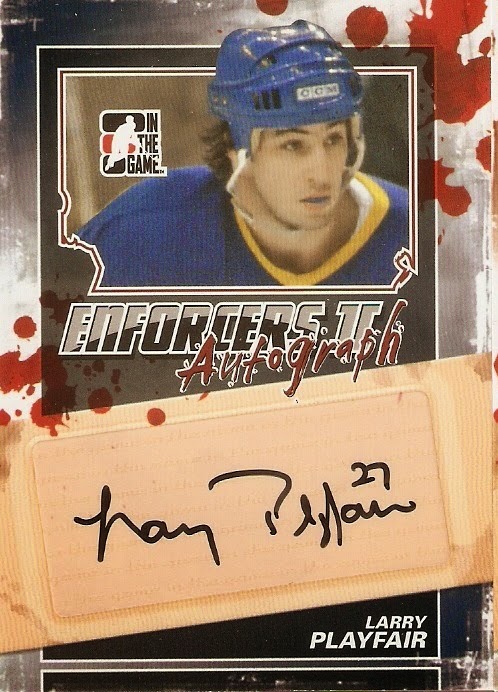 Larry Playfair is a pretty fun name for a player who is an "enforcer". I guess when you drop the gloves with him you don't have to worry about headbutts or biting. Larry played nearly 700 NHL games and had over 1800 PIM. His best year was likely in 81/82 where he had 6 goals (career high), 16 points (one less than a career high) and 258 PIM (career high). While those numbers aren't Gretzky like, in all fairness Larry was a defenseman and knew how to clear the front of the net a variety of ways. 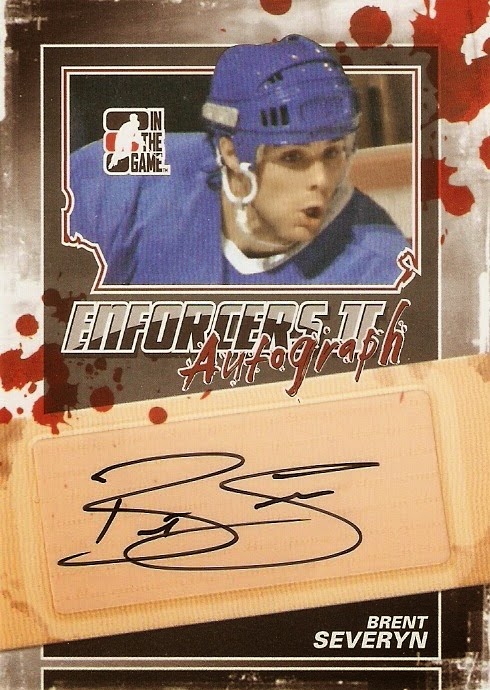 Brent Severyn is my next enforcer and with Sever in his name you knew he was destined for enforcer greatness. Brent was actually with the Devils organization for a couple seasons and scored 20 goals in the AHL to got along with his 240 PIM. As far as the NHL goes, Brent was a part-timer only playing in 328 games and his career totals are 10 goals, 30 assists and 825 PIM. 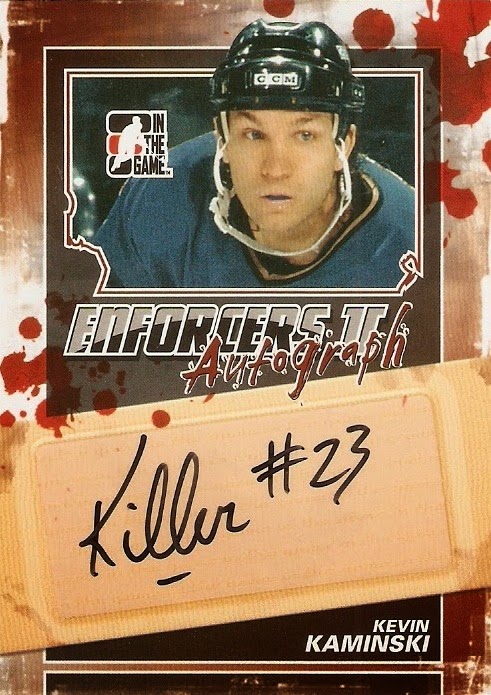 The last auto I got was Kevin Killer Kaminski. This is without a doubt the best auto in the bunch, especially because he goes by one name.....Killer #23. Killer as he is known by all was a superstar in junior and the AHL. One season, he had 38 goals, 61 assists and 247 PIM. Despite playing 8 games fewer than the teams leading scorer it was only 1 point off the team lead. The team I am referring to is the 87/88 Saskatoon Blades who also had Tony Twist on its roster. That would be a team I wouldn't mess with....ever. Killer couldn't balance his fighting and scoring when it came to the NHL so sadly he only played in 139 games and scored 3 goals. But he did get into coaching as has done very well for himself in the SPHL (Southern Professional Hockey League) where he has had a 0.652 winning pct over the past two seasons.


There you have it, I beat the odds and raked in the autos. Thanks again Matt and I will get to some awesome stuff I received from a fellow collector as well as some birthday breaks.
Posted by Pro Set Cards at 1:03 PM No comments: