Continuing on the path of pairs, I have a pair of this particular card but rather than scan it two times and illustrate two different serial numbers I decided to just focus on one of them.

Year after year, Upper Deck releases the Artifacts brand early in the season and for me personally it's always a delight. The cost is usually around 100 CDN and what you get for your money is typically pretty solid. Before last year it was 10 packs per hobby box but now you only get 8 in a hobby box. In those 8 packs you pretty much are guaranteed a "hit" per pack. A hit in this case is essentially an insert, auto, game used, rookie/rookie redemption or a serial numbered card. For more discriminating collectors, you essentially get three game used/auto cards per box plus a rookie redemption so half your packs are going to at least make someone really smile. There are also some case hits including rookie signatures and other great value added items which make Artifacts loads of fun to rip.

What I love beyond all the hits etc, is the design that the base cards and rookies typically have year in and year out. I am going to focus on this Pavel Zacha rookie: 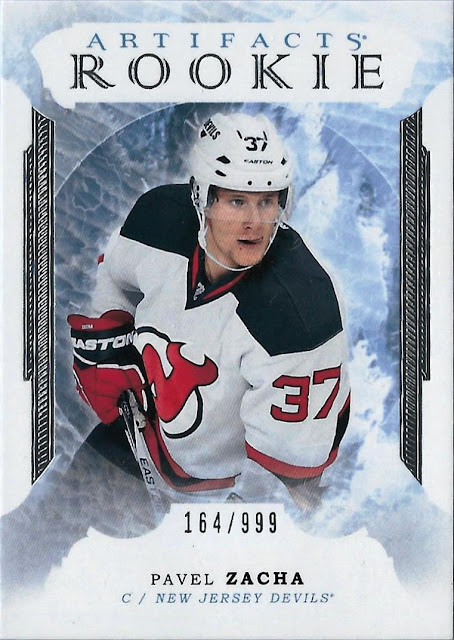 The design of the Artifacts rookies are usually very simplistic and easy on the eyes. The players are always the focus on the card and typically there are some foil accents added to the card. Each rookie is always serial numbered and they typically range from 699-999 depending on the number of rookies and if it's a live pull or a redemption pull. Even at 999 they are at least 5 times more rare than your standard Young Guns rookie. With that being said, not all collectors share my love of these cards and as a result they typically don't sell for more than their Young Gun counterparts and in fact are often a much more affordable alternative for collectors. For example, an Auston Matthews Artifacts redemption can be had for under 100 CDN on the secondary market meanwhile his Young Guns rookie will set you back more than 150 CDN typically. As much as this speaks to the strong following Young Guns rookies have, I also believe it speaks to the great value an Artifacts rookie has. Which rookie is right for you is entirely your decision. Budget sometimes says one rookie over another and sometimes a collector needs BOTH. What is neat to about some of the live rookies in Artifacts is the chance to get additional parallels like game used jerseys, patches or autos much like the Santini's I shared. 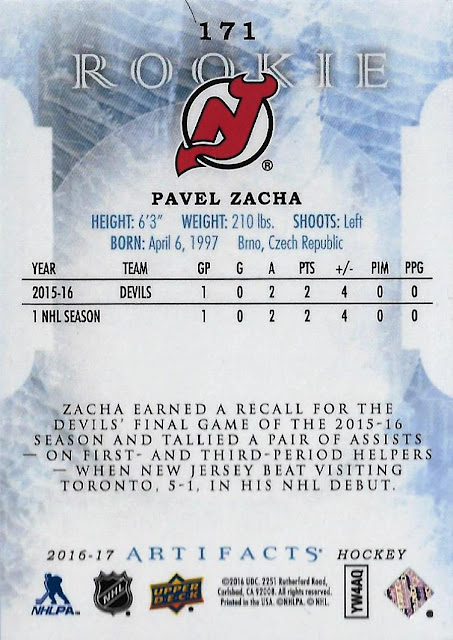 Back side of the Artifacts rookies is equally easy on the eyes as the front. Very clean and easy design that isn't distracting in the least and you get a nice brief player write up as well as stats and a vitals. As you can see Pavel had a great start to his NHL career, this season has been a little less successful (a fair bit less than 2 points per game this year) but I have faith he will grow into an amazing two way player.

I really like the design of both Artifacts rookies and Young Guns this season and I plan on reviewing this year's Young Guns a little more closely in a future post. Thanks for stopping by, and I have a couple more different Artifacts Zachas to share with you another time as well.
Posted by Pro Set Cards at 12:30 PM 7 comments: