I wanted to get my second half of my Drop The Gloves! trade posted, but getting the cards scanned without a scanner means it takes more time than I have at the moment, so I thought I would share something in between the two posts. A local dealer on eBay had a few items that interested me so I contacted them and made a bundle! Here is a fun card that I normally wouldn't have bought on its own because I don't know a lot about him, but in the bundle it was a deal I couldn't pass up!

11-12 Between the Pipes Thomas McCollum Auto 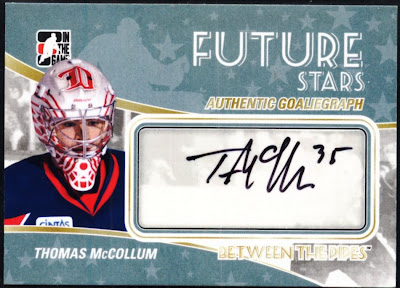 This former first round pick of the Red Wings has had a little trouble finding a spot on the big club's roster, but then again Detroit likes to take their time with their goalies so that part isn't too troubling for McCollum fans.His AHL numbers are pretty solid and this season he is 7-4-1 with a 2.55 G.A.A and a .907 save pct.
He is splitting that time with Petr Mrazek which is why he hasn't appeared in as many games as other goalies, but still decent numbers for this 2008 draft pick.

This card is by no means the gem of the lot, but just a fun card I thought I would share. I actually have quite a few fun posts on the way including the last two mystery boxes from my LCS (yeah I found more) and lots of fun pick-ups and PC additions!