There are some cards that are in my collection that mean more to me than the value or cultural significance of the card. Sure some cards are really valuable, sure some are iconic but some are just special because they remind you of something that you once had or experienced that may now be gone. This is one such card that will always have a special place in my heart because it reminds me of one of the happiest times in my childhood before things really changed.

It was the spring of 1991 and I had been collecting for a several months by this point and I actually was pretty much finished the 90-91 UD low series by this point. I actually only needed one more card, number 55 which was a rookie of a pretty hot goalie named Ed Belfour. Ed had taken the league by storm and he won me over as a fan just as quickly. I even had my own Blackhawks jersey (I had already owned a Devils one btw) which I would wear and try and emulate his flopping style during the countless road hockey games I played as a kid.

So I need this card, and I remember my mom taking me to the one card shop I didn't particularly like, but it was convenient in where she was going that day, so I went in hoping to find this card. Sure enough, it was there in the display case, sticker price 8 dollars. Yep, 8 bucks. I am pretty sure the ink hadn't dried on the Beckett yet, nor the sticker. He was that kind of dealers, who loved to "pull it out and crank up the price." I was young and I had a job, so 8 bucks was a lot, but I knew I could always go and make more money so I paid the hefty price. However, once I left that shop, I was in love.

This card was my world for the next few weeks. Sure it counted as the last card in the first full set I ever put together, but it was more. I carried that card in a top loader in my coat pocket for days. I would pull it out and study the picture. I would read the back endlessly. I would wonder why he wasn't included in the 89/90 OPC set. I would gawk at his cool goalie stick or plain goalie mask. I would wonder how long did he wear 31 before switching. My little pre-teen mind would just fly when seeing this card. I even loved the red/black contrast and which the Devils would change their colours (I got that wish).

Anyway, I would eventually take the card out and put it into the page it belonged on, and I would pull this card many more times from future packs I would buy. I would even complete the full set a second time and by now I likely have a dozen or so of these Belfours. I am not sure which one was the one I paid 8 bucks for, but when I see this card, I think back to that day, that feeling and I am reminded why I love collecting.

Here it is, enjoy! 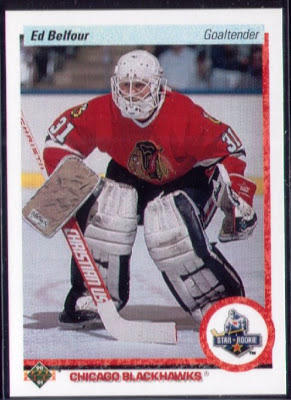 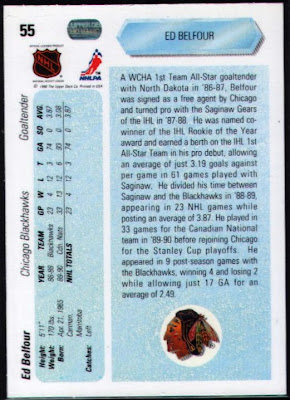 So when I had the chance to land this card, you know why I did. 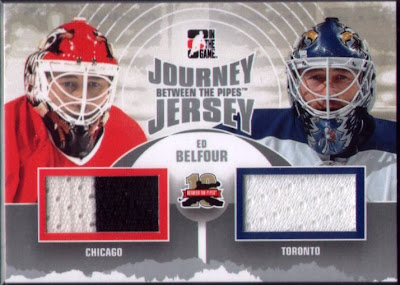