Super Amazing Trade with Casey from Drop The Gloves!

A few weeks back Casey from Drop The Gloves! Posted some sweet cards he wanted to trade/sell. Well, I should happen to have been in the market for a Milt Schmidt auto for quiet sometime, and I mostly blame it on Shane from Shoebox Legends, and primarily this particular post.

Anyway, Milt is still alive and kicking, but I don't really own any cards of his that I would want to mail away and risk losing, and time isn't on my side these days in terms of prep, writing etc. so I really just wanted to buy one. Well, it turns out that Casey was looking to sell or trade just what I wanted so I contacted him and I got more than I bargained for! Casey didn't want to break the set apart and when I realized that the other two fellows in this threesome are deceased I knew I should just chase all three.

The set itself was 5 cards, featuring three players and the book value on the set is 10 bucks according to the Beckett Bible. What I found interesting is the set, which was printed in '94 and was limited to 3000 copies WAS NOT RELEASED as an autographed set. So chances are, these three guys were there signing these autos in person. Of course, there is no way to know for sure because I didn't live in Waterloo until 1998, but knowing that all these guys were around in the area at that time and all three autos seem very legit and the Beckett lists this set I suspected these were legit.

So I made a trade offer or two and in the end we came up with something that could work! Here is the first half of the trade, these were the cards I was expecting. 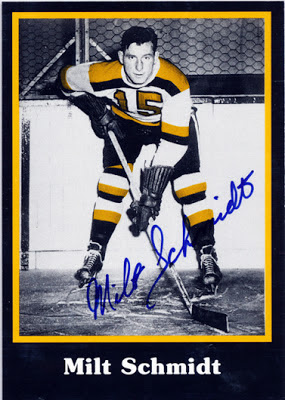 Milt Schmidt signed this card in blue ink. Milt was by far the best player in the trio of cards and he was elected to the HOF in 1961. His pro career started in 1936 and he played for several seasons before going to war for his country. That cost him 4 seasons of pro hockey which I am sure was insignificant to him because of what he was fighting for. However, in spite of missing many prime years of his playing career, he put up some great numbers for the time period including 5 seasons where he was in the top 10 in scoring. Milt retired with 2 cups and 575 points which at the time was one of the highest in NHL history (Maurice Richard was the leader with 725 pts). 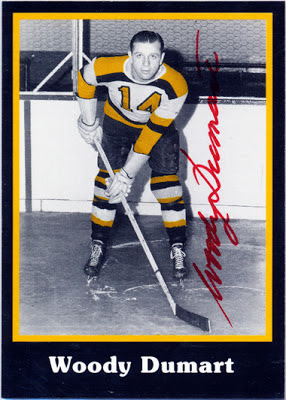 Woody Dumart signed his card in red ink. Woody is the other HOF'er in the group and like Milt played before and after the war. Like Milt he went away and fought for his country and like Milt he had won 2 cups and a variety of NHL honours. Woody unfortunately has already passed away so I knew this card was a must have because there aren't as many of his autos floating around on the open market. 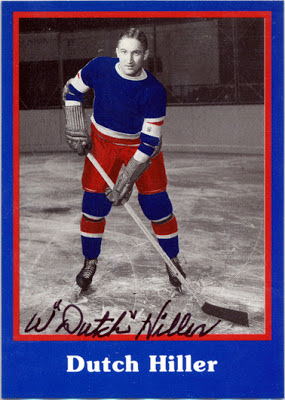 Wilbert Dutch Hiller signed his card in black ink. Dutch was arguably the least successful of the three despite winning two cups of his own and playing a solid 9 seasons in the NHL. Dutch was never called to the HOF, but that doesn't make this card any less desirable, what I like about these three guys is they are all from a little part of Ontario called Kitchener-Waterloo where I spent many happy years in University there. These are three guys who have tasted NHL success and lived long and healthy lives. Unfortunately Dutch has also passed away, but I really appreciate Casey giving me a change to obtain one auto I have wanted for a while and two other autos that I know I could never get through a TTM.

Also, don't forget this is only the first half, the second half of the trade is equally awesome because these cards came unexpectedly!
Posted by Pro Set Cards at 9:52 AM