I was in the card shop the other day (just before Hockey Card Day) and I decided to pick up a pack of 10-11 SPx. There were lots of other choices (no Heroes and Prospects though) so I decided to go for a pack. This is only the second pack of this product I have ever bought (the first being an 08-09 pack that yielded base cards). I can't really say why I have never bought more, but it probabily has to do with the high price (9 per pack) and the low odds of hits for your money. I usually try and stick with the most bang for your buck. 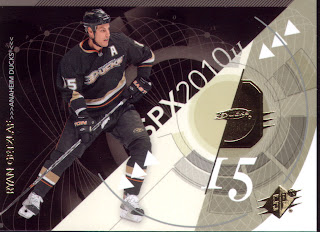 I am not a huge fan of the front. The player seems to not be the focus and more than half the card is devoted to a "spirograph" looking design.
Here is the back: 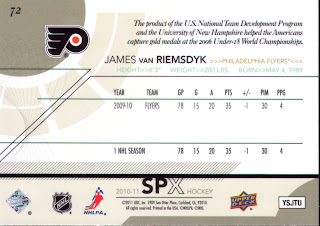 I like the back better. Very Clean and the font is simple. It seems like UD and SPx both incorporate a very modern looking font this year.
Here is the rest of the pack: 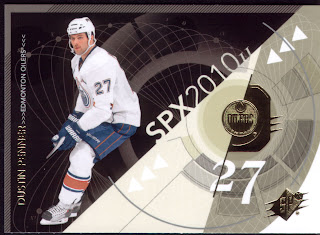 Here is Dustin Penner. He has been mentioned a fair bit lately as part of trade rumours. 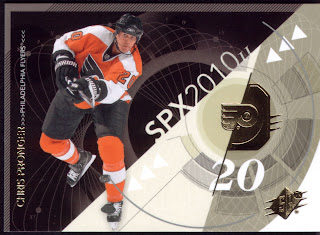 Chris Pronger. He loves to play with an edge and burn bridges when he leaves his former teams!
And a little surprise. Looks like I found a hit! 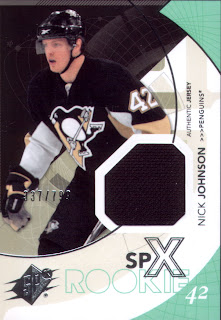 Due to the multiple injuries on the Penguins, Nick Johnson is getting some ice time and is finding the score sheet. So far this season he has a goal and an assist in his three games this season. He also has 20 goals in 48 games this season in the AHL. Nick may find himself in the NHL full-time this season and based on his performance I think he has the potential to stay. Time will tell!
Card Quality: 7/10 These cards are of premium quality, definitely a mid-high range product
Photography: 3/10 There really isn't any photography. Each player looks like they had an action photo cropped onto the spirograph background.
Inserts: 7/10 The hits are awesome if you get one. I was lucky to get a low range rookie and even that has a decent swatch on it and numbered /799. My complaint is the hits can be hard to come by unless you pay 140 for a box.
Value: 6/10 These are lottery tickets to me, and I almost never win anything playing the lottery so, they are a gamble to say the least. I imagine buying a box will yield much more satisfaction than buying an occasional pack or two of this product.
Posted by Pro Set Cards at 12:32 PM