My first baseball card I ever bought

First off I need to say I do OWN baseball cards. Not many, and how I got some of them I will never know. Sometimes they were in a pile of hockey cards I bought, or sometimes I just ended up getting them because people thought I would want them. I did participate in a JBF Tradebait draft, but I don't really consider those cards bought either. A little while back I actually laid a bid down on a baseball card and won. Here it is: 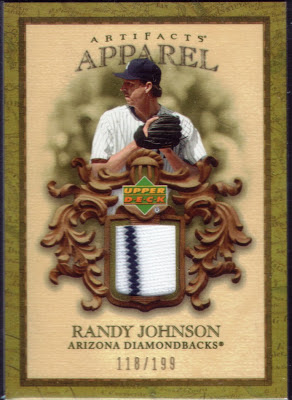 My favourite player of ALL-TIME. Living or dead, I am a huge Randy Johnson fan. I grew watching any game I can on TV, listening to others on the radio when they weren't televised. He may not have been the greatest of all-time, but he certainly ranks as one of the best lefties in MLB history and a player I have always worshiped.

The card is from 07 Artifacts I believe and is from a time period I would rather forget. I really wished that Randy never went to New York and parts of Randy I am sure would agree too. He was first and foremost a Mariner to me even though I own a Johnson Expos jersey. His finest pitching was with the D-Backs and I did enjoy seeing him there too. The Yankees thing was a sad part for me, but still to down a piece of Randy is special to me and even more special since it was 99 cents plus shipping. Autos are much harder to come by, but someday I hope to have one along with his 89 UD rookie. I guess my baseball card buying days aren't done yet.
Posted by Pro Set Cards at 8:10 PM