Some good news out of Devils land

In what I would call one of the strangest summers in Devils history, I finally received some news that I felt was post worthy as it plays a huge factor in my collection as well. As many of you know, I am a Devils fan during both good times and bad and seeing two of my favourite players take off (Clarkson and Kovy) has made the summer a little tougher. I have tried to turn this into a positive and I have had huge success online selling some of my Clarkson cards. To date, I move both my The Cup Rookies as well as my Game Used Spectrum which has allowed me some serious online spending. I am going to celebrate my sales and my team's recent signing in the next several posts. Here are some of the loot that I have landed thanks to my eBay sales!

I also want to point out that Adam Henrique will be a PC of mine as he will be a Devil for 6 more seasons and given he has scored more important goals than many players in Devils history this clutch kid is a no-brainer for me to collect seriously. 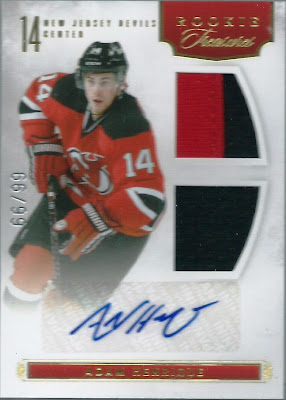 Here is my first huge landing in the Henrique world. This is without a doubt one of his finer and more valuable rookies and it is pretty cool that it is numbered 66/99. I love the two colour seam piece with a standard black swatch below. Too bad it isn't including his number 14 in the auto but I guess that is because he signed a huge sheet of stickers early in the NHL season. 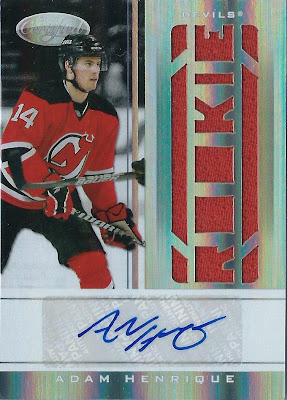 One of my favourite products released in 2011-12 was Panini Certified and their rookies are some of the nicest cards in my opinion. A great large swatch with foil board and an auto. I actually landed two of these cards but one of the sellers contacted me and basically said you won it for too cheap so I am selling it to a friend. A true shame because it was a pretty awesome black swatch which I thought would look awesome with the red one in my collection. At least one of my sellers was honest and sent me the one you see above. Adam's sophomore slump and wrist injury have brought many of his rookies down in value and made collecting him a bit more affordable so I am hoping to scoop up low and enjoy them as he gets back to his rookie year form.

So here is the first a few posts based on my eBay sales, stay tuned for some good vintage and another PC lot pickup.
Posted by Pro Set Cards at 5:01 PM