When it comes to collecting, I have had some good luck and I have had some bad luck. I don't think you can collect for as long as I have without experiencing both. But I have also had some jaw dropping moments that I cannot classify as being anything other than a serendipitous event. I love that word and it is pretty fun to say too. Basically I am talking about getting good fortune by total accident. The first of a couple cases I am going to share just happened in the last month for my birthday:

My wife who I have mentioned before got me back into collecting cards I think is slowly starting to regret her early support as she now refused to buy me cards for birthdays and Christmas. However, she will still occasionally bribe me with cards and she did splurge and spend 4 dollars on two PressTine repack boxes. A few bloggers have shown them before and basically mine was no different. A couple theme repacks and a pack of 10-11 OPC where in one box and the other had 08-09 Victory and a couple theme packs to go along with an empty 35-card hinged box. Anyway, usually these repacks are all the commons from whatever decade they claim to represent and the other packs are always filled with stars and their ultra rare early 90's cardboard.

However, one man's trash is another man's treasure in today's case. Check out my jaw dropping pack! 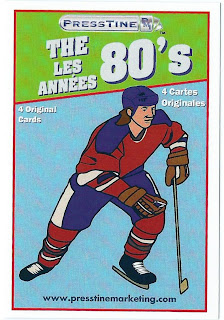 The pack begins with a header warning you what excitement is about to come your way. 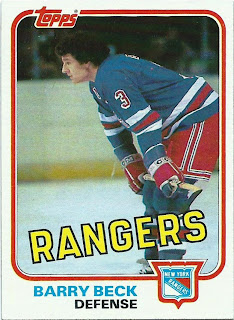 First off was a 81-82 Topps Barry Beck. Barry was a highly touted defenseman whom the Rockies felt was going to be so amazing and game changing that they selected him over lesser players like Doug Wilson, Mike Bossy, Rod Langway, John Tonelli, Greg Millen and Glen Hanlon just to name a few. True he would be an ok defenseman and he would yield a boatload of players in a trade with the Rangers....but Mike Bossy could have changed the Rockies franchise around! 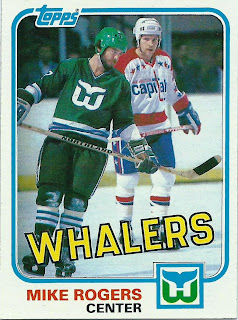 1981-82 Topps Mike Rogers, Mike Rogers was a scoring machine. He proved that WHA'ers could make an impact in the NHL and he did it immediately scoring 44 goals and 105 points in his first NHL season. I really don't know why his career ended so abruptly, but maybe one of my older fellow bloggers could inform and educate me. I couldn't find much online and he played his last NHL game at a pretty young age of 32. 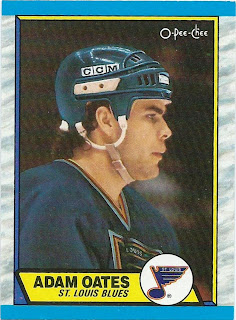 Wow an OPC card! 89-90 of course. Adam's career was about to blast off at this point. I wonder if he has any idea how amazing that trade to St. Louis was going to be. True he would have his highest output in Boston, but the Blues was where he became an all-star. 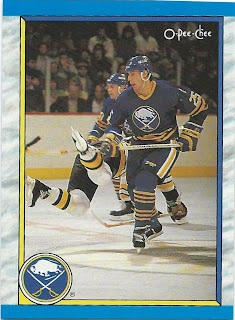 SO there you have it, my repack. Pretty amazing huh? Can you guess which card was the jaw dropping one? 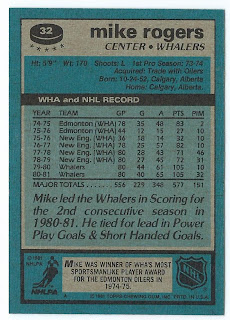 Well it was this one. Honestly there is NOTHING special about this common other than I desperately needed it. Let me explain:

So online about two years ago I bought a "complete" 81-82 Topps Set and I even featured it here. Being a huge fan of the 81-82 design but light on funds that set was a perfect starting point. I have since added tonnes of the OPC rookies and I may just pull the trigger on the OPC set someday. So the night it arrived to sat in my living room and fired that set into pages. I would pause and read a few but the main reason was to get it in safe and sound and I can enjoy it at my leisure. However, just before I finished putting it all in I realized that I was missing Lanny MacDonald. I had two Merlin Malinowskis instead. So I contacted the seller that night and he appologized and said I could keep both Merlins and mailed me a Lanny. Then the set sat for a few weeks and then I opened it up again and noticed something horrible.

I noticed that I had TWO #33 Borje Salmings! That mention I was missing another card which turned out to be number 32, Mike Rogers. So for a very long time I was missing a card in one of my favourite sets. I was going to contact the seller again but I felt that might come across wrong and really it was my fault for missing it too.

Then Sal at puckjunk.com had a cool contest which was the One Card Challenge. I thought great, a contest and a chance to get my missing card. So when I saw this, I went to my "want page" rather than wait until I got home and check my binder and sure enough the card I was missing was number 33. So Sal who was running the contest actually said he had the card and sent it my way. All the time it took to arrive here I thought wow I am going to have my complete set finally. However, in case you got confused because I know I had, it turns out I already had 2 number 33's and now I had a third. The elusive number 32 was still missing from my collection. SO for the next year or so I kept pondering if I should just pay the 4 bucks it would be 99 cents plus crazy shipping to get the card I needed or just hope it will arrive someday.

Well thanks to my wife, a PressTine repack and two years of waiting, I have the missing card that has eluded me all this time. You have no idea how happy I was to get this and the funny thing was my wife when she gave me these two boxes from the dollar store, said " I know they aren't much or might not have anything good in them but I thought you might like to open something". Well Julia, you may not have had much hope in that little box but I got one of the coolest accidents ever in my collecting career. When you think about all the common cards from the 80's and select 4, who would think that I would get the only card I was missing from my 81-82 Topps set.

This serendipitous even certainly provided me much amusement on my birthday but it also has increased my love of a set that will always have a great story.
Posted by Pro Set Cards at 10:51 AM