I have had some success on eBay and sold a couple items and I have some purchases based on those sales to share very soon, really just need the time as they have already arrived. Here is another auto rookie pick up in the meantime: 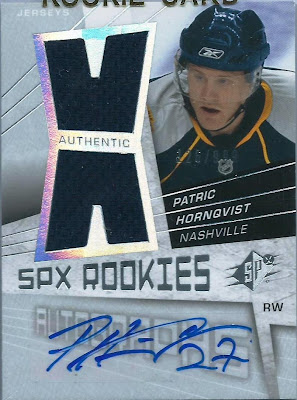 Here is a gem I found that Nashville actually drafted with their last pick in the 2005 Entry Draft. I am not sure if Hornqvist is the best every player picked last overall in a draft but he must be close if he isn't! Only four players selected in the first round have more career goals than he does and Nashville has him locked up for another 5 years and I hope he continues to grown put up his customary 25+ goals a season.

I think I like him so much because he is a quiet player that just goes about his business and doesn't need to cause a scene. I also really like the fact the it goes to show anyone can be a superstar and it isn't just limited to first round picks!
Posted by Pro Set Cards at 11:39 AM