Card of the week - Jaromir Jagr

One of the bigger surprises of the early part of the 11/12 season is how well Jaromir Jagr is playing. It almost seems like he is sharing a water bottle with Temmu Selanne as he has turned back time and is playing like it is 2006 all over again. Currently he is on pace for 33 goals and 80 points which isn't too bad for a player who will be 40 before the end of the season. 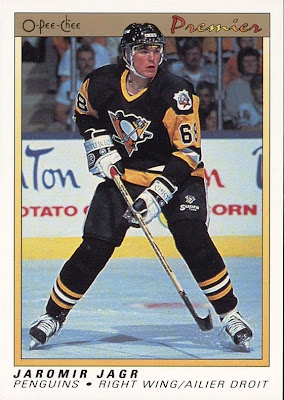 Here is the front side. Long-time readers know this is one of my favourite sets. I remember buying a pack of these in my early days of collecting at a 7-11 for like 40 cents with tax. Then it seemed over night the prices sky-rocketed and I remember shelling out 10 bucks for a pack in Toronto (luckly I pulled a Fedorov RC from that pack which HAD a BV of 50 bucks so I felt good about the transaction). Fast forward 20 years, the value of the set has stabilized and the most valuable card in the set is Jagr at about 10 bucks for a raw mint card. I bought a box a while back for 20 bucks and had fun pulling a pair of Jagrs as well as a few other goodies. What is neat about the set is the players are in there alphabetically based on last name which I haven't seen occur too often.

Design is clean and simple. The top border was reused for the baseball release and the photos are in game action shots for the most part. This set contained only 132 cards and can be found in the 30-60 dollar range online. Card shows may have better deals, but I wouldn't know. 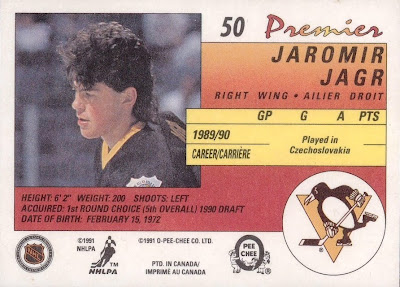 Back sides are neat. They don't have year by year stats and they don't have anything beyond games and basic offensive stats. Love it when photos are included on the back and you see Jaromir rocking the 90's era mullet.

Beckett Value: 4 - 10 dollars
How I received the card: Pulled from pack