I personally don't have a list, but there are a few cards I really want to own before I die and the 80-81 Topps/OPC Gretzky card is one of them! When I had the chance to land one online for less than 20 bucks I thought I would jump at the chance. Of course, you can always land a Gretzky card for under 20 bucks, but I wanted one in great shape. Wanting a quality 80-81 Gretz means I probably would need to go for a Topps version and sure enough I landed one.
The card isn't mint. The scratch and reveal puck has a tiny bit of scuffing and the card is off-centered but, apart from that, there is nothing wrong with this card (unless you have a problem with the treat on the back). I took the photo of the card in the top-loader it arrived in because I don't have a screw-down for it yet.
The reason why I have always wanted to own the card is because it is a sweet photo. It is iconic to my childhood as a collector seeing it in the display cases of a few sportscard stores and not being able to afford it. But there is more, in my second life as a collector, I have come to realize that if there wasn't a WHA, this WOULD be a Gretzky rookie. In addition, Gretzky's rookie (correct me if I am wrong) actually features a photo from his WHA playing days so this card would actually feature The Great One during his first NHL season in which he SHOULD have won the Calder Trophy.
Here is the front side. You can see it is a bit of a miscut. 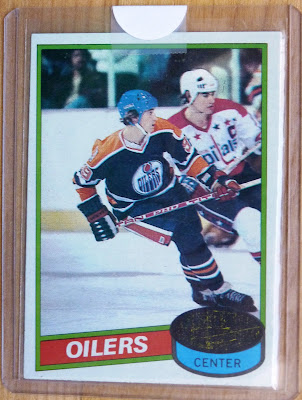 Here is the backside with a little waxy treat. 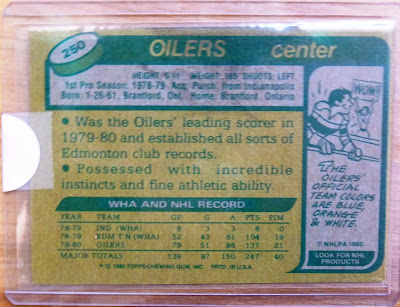 When I read that there was a Wax Stain on the card I knew I had to throw a minimum bid on this card. When I was the winner, I was probably as excited for this card as I have for any I have received in the last couple of years.
The card certainly has some significance to me because of years and wanting and in the short term it certainly will be the best Gretzky card I think I will own. I still am not in possession of a Gretzky rookie, but someday when the time is right I hope to get that one too.
So I am curious, do you have a list of must own cards? Or are you like myself and there are cards you want to own but there is no formal list. What cards are on that list?
Posted by Pro Set Cards at 10:19 PM