This is the first time I have ever bought a box of an ITG product. Here is hoping I would get some first-timer's luck!
The box has 18 packs and there are 8 cards and 1 points card per pack. The box cost 89.99 plus taxes. I think the cost in the past is one of the reasons why I never purchased this product but seeing the quality of the hits in comparison to other products; I am looking to try something different.
Here were my hits in order.
Pack number 2 produced this gem. Matt Puempel is currently ranked #29 of the North American Skaters at this upcoming draft. He has 34 goals and 69 points in 55 games this season with the Pete. A hip injury has hurt his stock slightly as it will more than likely require season-ending surgery. These are limited to 120 copies. 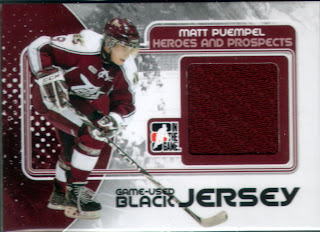 This was an insert I was definitely hoping to pull. If you have seen my C56 post then you will know I love these little tobacco cards. After watching the Don Cherry Story I must say I will never look at Eddie Shore the same. If the movie has any accuracy at all, Eddie was a pretty sadistic guy. I will never forget him tying a noose around his goalies neck to keep him from dropping to his knees to make a save. 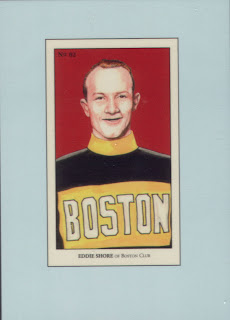 I am pretty excited about this card. Brendan Gaunce is going to be a high draft pick in the 2012 NHL draft. He was the 2nd overall pick in the OHL draft in the 2010 draft and is only going to turn 17 later this month. His brother Cameron is considered to be a strong prospect with the Avalanche. Not bad for my first autograph. 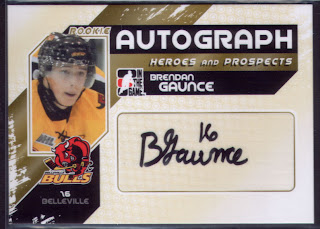 Here was my second game-used hit. These cards are limited to 100 copies each instead of the 120 of my previous game-used hit. Boone Jenner is an interesting name to say the least, but as a prospect he is a 17 year old who is eligible for this coming draft. He has 56 points in 55 games with the Generals which is a little lower than expectations going into this season but he should likely go in the 3rd round in the upcoming draft. 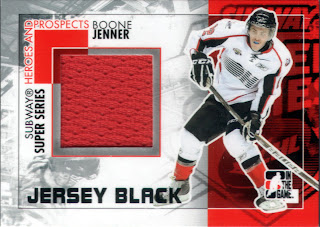 My second autograph is of Carolina prospect Zach Boychuk. With 2 WJHC gold medals to his resume, it is safe to say this kid is a winner. The Hurricanes are slow bringing this kid up but I think like wine he will age well and could very likely be a strong 2nd line centre. 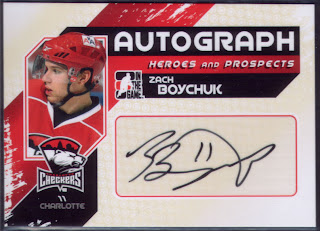 Then in my second last pack I find a nice surprise. An Ethan Werek game-used gold jersey. These are limited to just 10 copies and the swatch is the nicest I have ever pulled myself. It is a three coloured swatch which bulges out of the card. 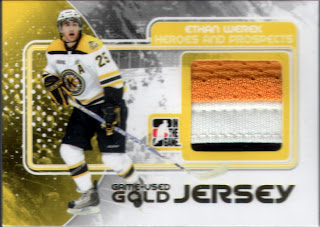 Ethan Werek was drafted by the Rangers in the second round of the 2009 draft. He currently is still with the Frontenacs and is averaging a little more than a point a game with them for the past 2 seasons. I have trouble gauging Rangers prospects because one minute they can be challenging for rookie of the year and the next minute they are buried in the AHL. Here is hoping he finds himself a home and makes a nice name for himself!
In all I would say it was as successful break.
Here is the summary
139 of 150 base cards
15 point cards
2 autographs
3 game used mem. cards
1 100th anniversary card
1 75th anniversary card (Jim Anderson)
1 Calder Cup Champions Card (Francois Bouchard)
If you can help me with my missing 11 cards please let me know I would like to try and finish this set.