A new feature I want to do on my blog is called back checking. What I am going to do is post a neat or interesting card back that I have in my collection. I love reading card backs and may enjoy it as much as the photography and designs on the card front.
I recently picked up a part set of 85-86 Topps. Essentially I got all cards in NrMt-Mt shape except for the Lemieux rookie. He was not a part of the deal, but the 164/165 cards were won with a 33 dollar bid. Essentially I got almost the whole set for about 20 cents a card. Sal from Puckjunk.com had traded me a Mario Lemieux Topps rookie with a wax stain back in the fall so together I have a pretty nice complete set.
When the set arrived I threw it into pages and began flipping through. I owned a couple of the cards either in Topps or OPC form but not the whole set. It was nice to go through and see the different cards and of course read the backs. I came across one neat back which I will share today.
85-86 Topps Pat LaFontaine #137 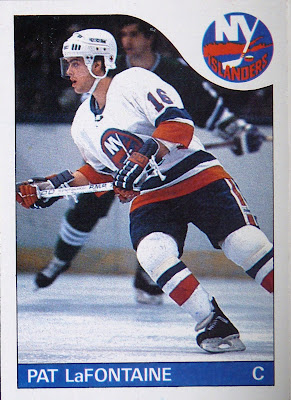 This is a Pat Lafontaine second year card, it features an action shot of Pat playing against the Whalers. 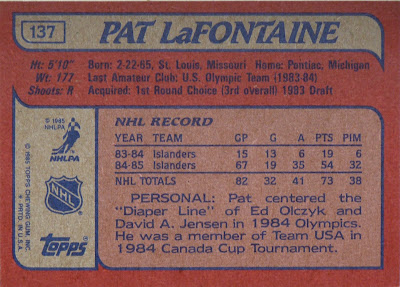 When you look at the back, I found two things jumped out at me. First was the awesome 13 goals in 15 games during his first season. Not a bad way to begin a career if you ask me. He would score only 19 in 67 during his first full NHL season. But the more interesting thing jumps out second and that is he centered what was called the "Diaper Line". I thought the "Baby Oil" line name was bad, this is just gross! I have a toddler at home and I know the nastiness those packages can contain and to have a line named that is pretty bad. Of course, it was in reference to their young ages but still, NASTY!
In all, a pretty cool card anyway, I have a couple LaFontaine rookies, but this is my first time seeing and owning his particular card and reading it taught me something!
Are there any worse line names that you can think of than the Diaper Line? I can't think of any, but I am sure they exist!
Posted by Pro Set Cards at 1:45 PM