So what you don't know is this is round 2 of this post. As a flash back to the early days of this blog, Blogger decided to vomit out my post when I hit published and dismiss all my supposed "save" that were automatically done while creating it. Now that I have that out of the way, I am also willing to bet a number of you know who is next on the list based on their similarities to #28. Joe Sakic.

#27. Joe Sakic. Quintuple gold medal club (WC, WJHC, 2 Cups, Olympic Gold and World Cup). He’d win a Hart, Pearson and Smythe trophies and be named to the All-Star team 3 times. His 1.19 PPG is 12th all-time which is impressive given the number of dead puck era seasons he played. 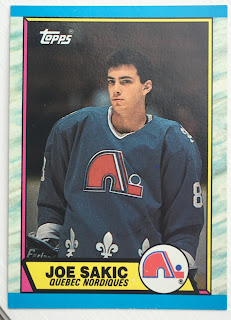 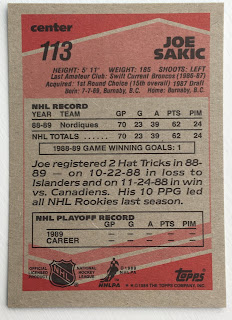 What I enjoy so much about the rookie card is you get a chance to see one of the few players who wore 88 for the Quebec Nordiques. 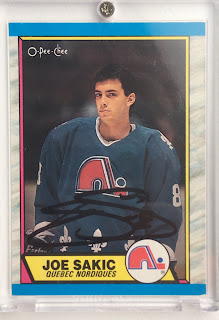 When you look at the careers of both Joe Sakic and Steve Yzerman before retirement and after, there are so very many similarities for these two boys from British Columbia. Both lead struggling franchises to the promised land more than once as a Captain and with very similar career points per game numbers.
What separated them for me and why Joe is 27th on my list goes down to the minor details. Truth is I'd love to have either of them as the centre-piece of my franchise and with the right tools you'd have a champion. Both wound up in the HOF and both won Cups, Smythes and other league awards. They'd even both win Pearson trophies but Sakic would also get a Hart. Yzerman would win a Selke but while you'd consider him the superior defensive talent between the two, it's worth even noting that Sakic also garnered Selke votes and finished second in Selke voting back in 2001.
In the end it was a gut feeling and a stat that broke the tie for me. My gut feeling was if I had to pick one, I'd go with Sakic over Yzerman. Sakic was a slightly better producer in the postseason (greater than a PPG compared to Yzerman who was a little less than a PPG). Finally when you compare their career PPG in the regular season Sakic edges out Yzerman 1.19 to 1.16. That's how close they are, but when you consider the lean scoring years while in their prime Sakic had to endure and put these numbers that is saying something.
According to hockey-reference their career numbers are close but the edge once again goes to Sakic with more points in less games based on career totals. Sakic has 1696 adjusted points to Yzerman's 1650 and when you consider Sakic played over 100 fewer games, Sakic gets the 27th spot.
Thanks for stopping by, I'll be along shortly with number 26.
Posted by Pro Set Cards at 7:49 PM