Despite my previous post about the gamble with opening product, the truth is I still buy the odd pack here or there but much of what you will see has occurred over the past year and a half (and at a rate significantly less that I have at any point in my life). If I do buy a product it's usually where the cost is low or the promise of reward is congruent with my beliefs. One product that came out at the end of last year was Upper Deck SP. Not to be confused with SP Authentic.

The analogy that I will use is think of SP Authentic as Coca-Cola or Pepsi. It's the name brand flashy version of soda and SP is the RC Cola or Great Value version. Both have their markets and I personally think both are great. However, SP Authentic carries a pretty high pack and box price where SP can be had for much less. SP delivers some neat rookies and rookie parallels and offers a nice bang for your buck which had me drawn in. While they don't have the resale value of SP Authentic's Future Watch, I personally wasn't buying packs for that.

I bought a couple packs from my local Walmart and was fortunate to his this card: 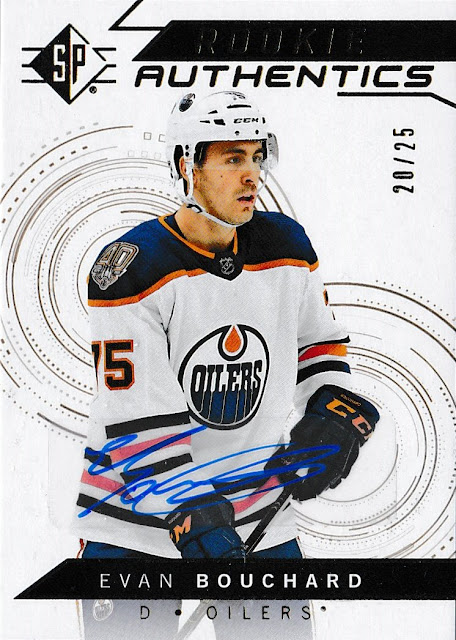 Simple SP Authentic inspired design here, sticker auto which is a detractor for some but not me. It's very low print run is one think all people can get behind. 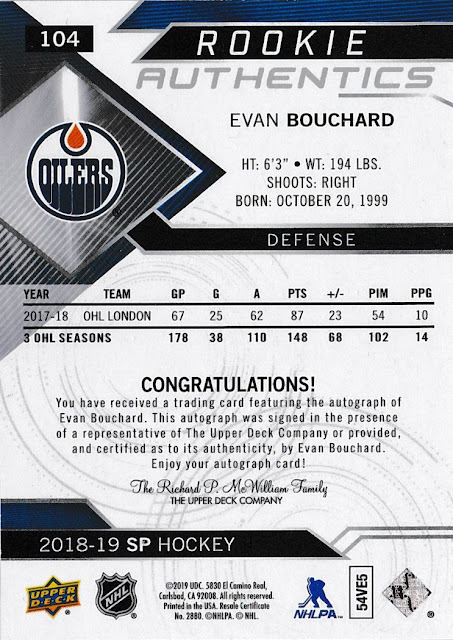 I love the back. Stats, vitals and a guarantee. Can't ask for much more.

Evan Bouchard was drafted 10th overall in 2018 and is considered a blue-chip prospect. He put together an excellent junior career playing for the juggernaut London Knights in the OHL and you can see his second last season on the back of this card. He'd return for more "seasoning" where he'd score 53 points in 45 games and another 21 points in 11 playoff games and another 8 points in 8 playoff games with the Condors. This past season he played all his games in the AHL and has put up a very respectable 36 points in 54 games which is good enough for a tie for second in team scoring and tops among their d-men.

This success is far from a given as many players who have done well in junior have had trouble translating it to NHL success, especially when a player has benefitted from other talent on the team. For example, Aaron Berisha scored 45 goals one season with the Knights (good enough for second just behind Christian Dvorak) would never get drafted, play university hockey in Canada before heading to Austria.

When it comes to Evan, I think he will make it to the point he will be an NHL player for good and a good one at that. He has the potential to be the best defenseman on the Oilers or at the best least their go-to offensive defenseman. When you add him with the weapons they already possess you get the feeling they could be as good as Sid, Gino and Letang were and still are. Time will tell but I do feel good about this prediction. Thanks for stopping by and see you next post.
Posted by Pro Set Cards at 7:17 PM