Living in the rural part of any province has its advantages and disadvantages. Living in rural Nova Scotia is especially hard if you are a hockey card collector. There are never any card shows, little to no card shops and mail service is slow. I have a local hobby shop I try and support but if I want a full fledged card shop, I have to drive almost an hour and a half to get there.
However, opportunity shone a light on me this past weekend when the local arena was housing a giant swap meet. There were lots of tables, lots of junk and a few sports cards kicking around. Armed with enough money to buy a blaster box, I found a few treasures that had me smiling when I left. There were two tables that I made purchases at and left 10 bucks with one and 16 bucks with another. Let me know how you think I did in all.....
1991 Score Young Stars Set. 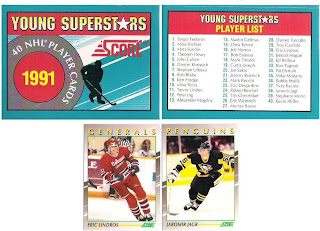 - image taken from kmmcoinsandcurrency.com
Maybe I am feeling nostalgic lately but I felt my collection needed this little factory set. I am pretty sure it is worthless, but 40 cards of some pretty cool stars, I felt was worth the 2 bucks.
74-75 OPC Greg Joly RC 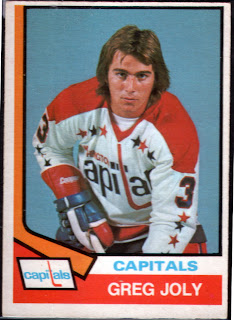 This was one of the few old rookies I saw kicking around and I could't leave this former number 1 draft pick lying around for 50 cents. Hope to turn it into TTM success.
74-75 OPC Lanny McDonald RC 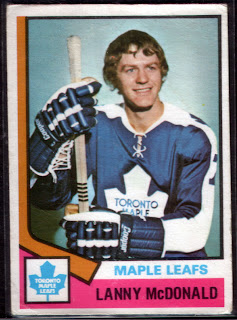 This card is not in good shape, as you can seen the corners are not sharp and there are some light creases around them, but for $1.50 I wasn't really going to expect much. He is a HOF'er and to have his RC in my collection for so cheap was a must.
74-75 OPC Bernie Geoffrion Co Card 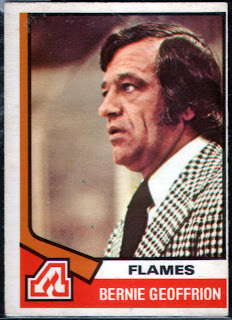 I didn't even know Boom Boom coached! He looks pretty sharp in one of Don Cherry's suits. Forgive the dirt on the top loader, but the card itself is in pretty good shape. Worth a dollar to me.
71-72 OPC Syl Apps RC 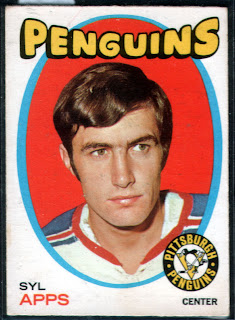 Here is another rookie I really wanted to have. Love the 71-72 set, and to pick up a RC from that set for a buck was a steal in my books. I am planning on sending this one as a TTM as well.
74-75 OPC WHA Heikki Riihiranta RC 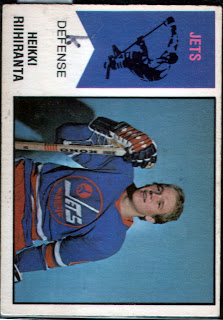 I probably over paid for these next two cards. Each was 50 cents, but I was caught up in the moment (I have seen very few WHA cards in my life) and to have a chance to buy them for so cheap I grabbed the two most interesting to me. This is Heikki's RC, but someone decided to write a 'k' on the card for some reason so really I am sure this card is worthless, but a rookie is a rookie! BTW, never heard of Heikki, don't feel bad, he never skated for an NHL club.
74-75 OPC WHA Wayne Carleton 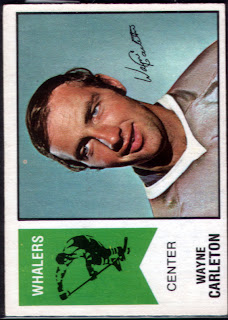 Wayne did play in the NHL and of all the WHA cards there he was the most notable. Paid 50 cents for this one.
97-98 BAP Pinnacle Krzysztof Oliwa 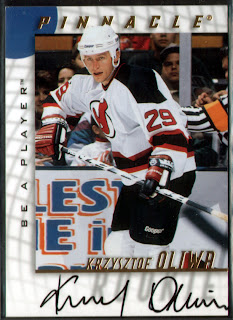 An autographed rookie card for a dollar? Couldn't leave this behind, especially since it is the "Polish Prince" Kryz Oliwa. He won a Cup with the Devils in 2000 and could fight with the best of them!
97-98 BAP Pinnacle Ray Sheppard 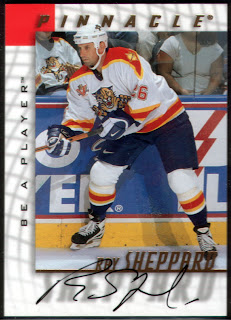 I always liked Ray Sheppard. Over 350 career goals including a 52 goal season with the Red Wings. A dollar for his autograph was too good to resist.
74-75 OPC Pat Quinn 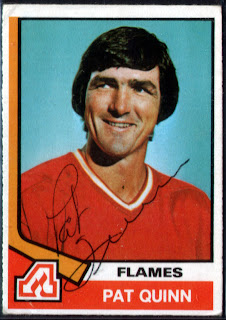 I was a little skeptical about this one. A dollar for a Pat Quinn auto. The card isn't in great shape, but the auto done in black pen looked legit. From what I seen online it looks real, but for a dollar I felt it was worth the risk of being a fake. What do you guys think? Real or fake?
72-73 Topps Yvon Cournoyer 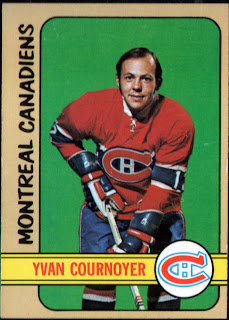 Picked up the Roadrunner and a couple other 72-73 Topps cards for a buck a piece. They are all in great shape and actually look like they were just pulled from packs. I am sending the next three out this week as TTM requests.
72-73 Topps Ron Ellis 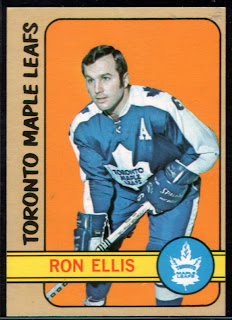 The dirt on the upper right is just on the top loader.
72-73 Topps Norm Ullman 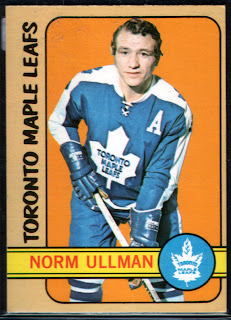 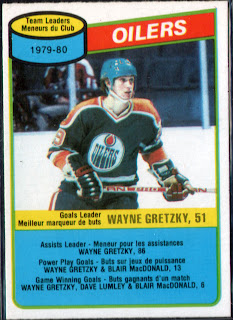 I paid 2 bucks for this card. There is a ding in the upper left corner and one of the previous owners used the checklist on the back. The card looks awesome otherwise and for 2 bucks I couldn't lose!
82-83 OPC Messier/Gretzky Highlight Card 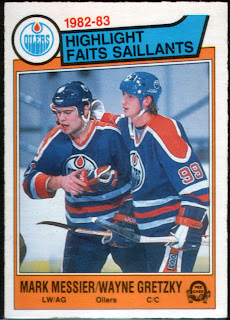 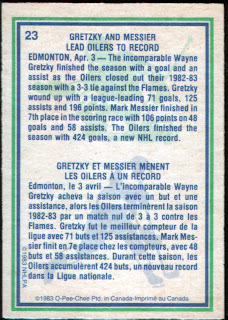 This was the most I paid for any of the cards. There is some typical OPC choppy cutting but that is the only thing wrong with the card. I have always wanted one of these and am pretty glad to have found it at the swap meet.
80-81 Gretzky RB 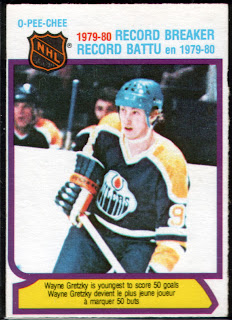 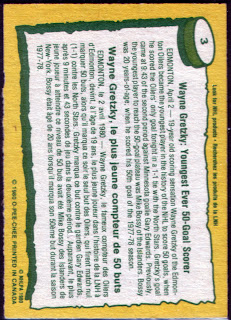 4 dollars is what this one cost. Same problem as the Messier/Gretzky there is some choppy cutting but that is about it. I think this is my fav of the whole lot.
In all 26 bucks for 15 cards and 1 set. How did I do?
I give it a 7 out of 10. I could have probably paid less for some, but given the age of some and if I have success with getting some autos that could really make this a great haul. If only the Gretzky team leader card didn't have the pen marks on the back!
Posted by Pro Set Cards at 2:34 PM