When it comes to sets from the 80's, some are more memorable or more valuable than others. 83/84 doesn't have droves of fans scrambling to write creative and thoughtful posts heralding its unique traits. Book value isn't high on the set or the cards in the set. With that being said, I love the set. Why you ask?  (but probably didn't)

Well I am going to tell you anyway. For me, I have had an interest in the set ever since I started collecting and it took me nearly 25 years to complete and I enjoyed every moment of it. The set I collated contains cards I pulled from packs, obtained in trade, bought from LCSs and finally a pile I got online in a random box of commons.

My introduction to this set began when I started to collect Pelle Lindbergh. He was my first PC and the first one I completed when I landed all four of his cards from his playing days in the 80s. I just remember seeing that rookie for the first time and thinking that card is amazing. My LCS as a kid had packs of 83/84 OPC for about 8 bucks a pack so I bought a couple and actually got a Gretzky as a kid which was huge in my world and over twenty years later I bought a few more to help me with the set.  So here is a post about my specific 83/84 set along with some special cards in the set which are cool and/or have meaning to me.

This set was one of two from the 80's that didn't have a Topps counterpart to so it was the only game in town for hockey cards as far as the masses are concerned. The set itself was 396 cards featuring many cool rookies but for some collectors the rookies aren't worth hundreds of dollars so as a result the set seems to fall through the cracks. However, if you look carefully, a number of rookies in the set are fringe HOF players or player who were all-stars multiple times.

Here is a shot of a wrapper from the set. I have a couple of these thanks to some packs I opened and thanks to other collectors who know my love for 83/84. I even used a portion of this wrapper for my header on this very blog. 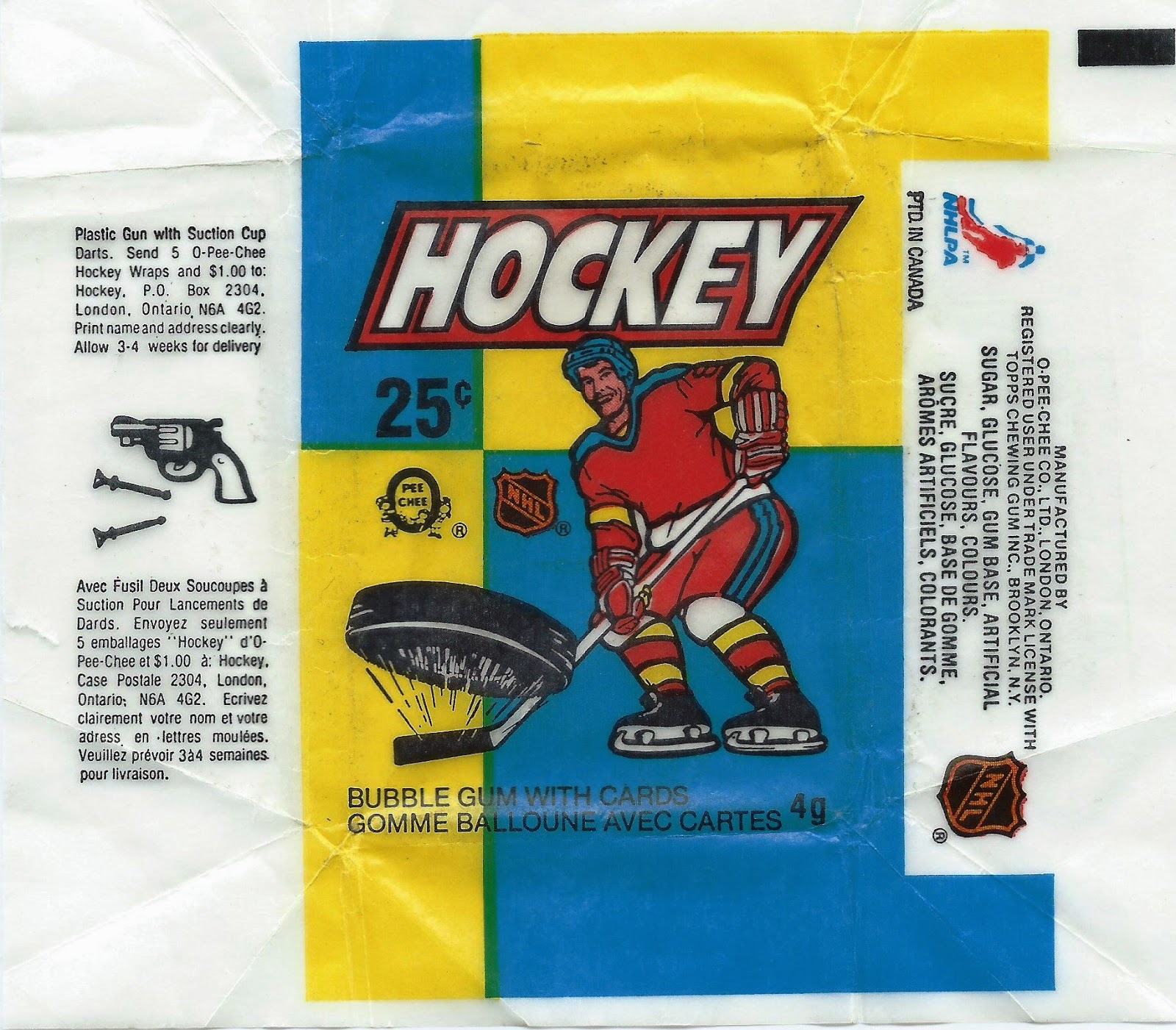 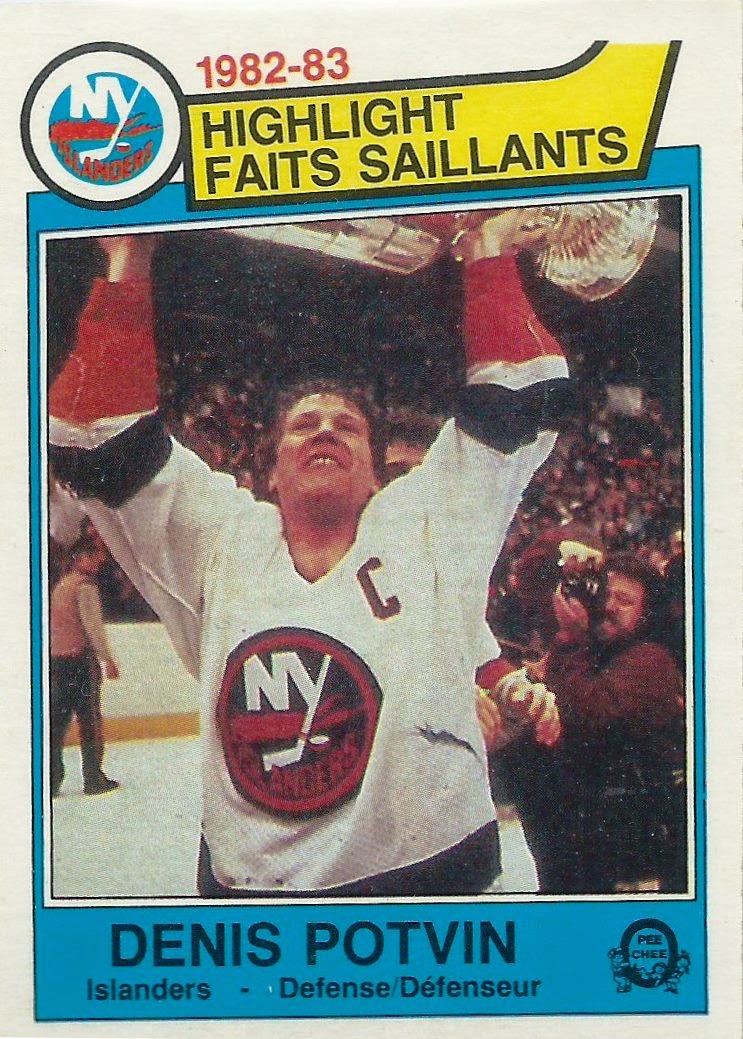 Card number 2 in the set features a season highlight that many players wish they could experience.  Denis' jersey looks like he and it went through hell to get that Cup. They beat the Oilers that season and it was Gretzky who noticed what it took to win by observing what the Islanders did to win that series. The Oilers would win the Cup next year and so began a new Dynasty. 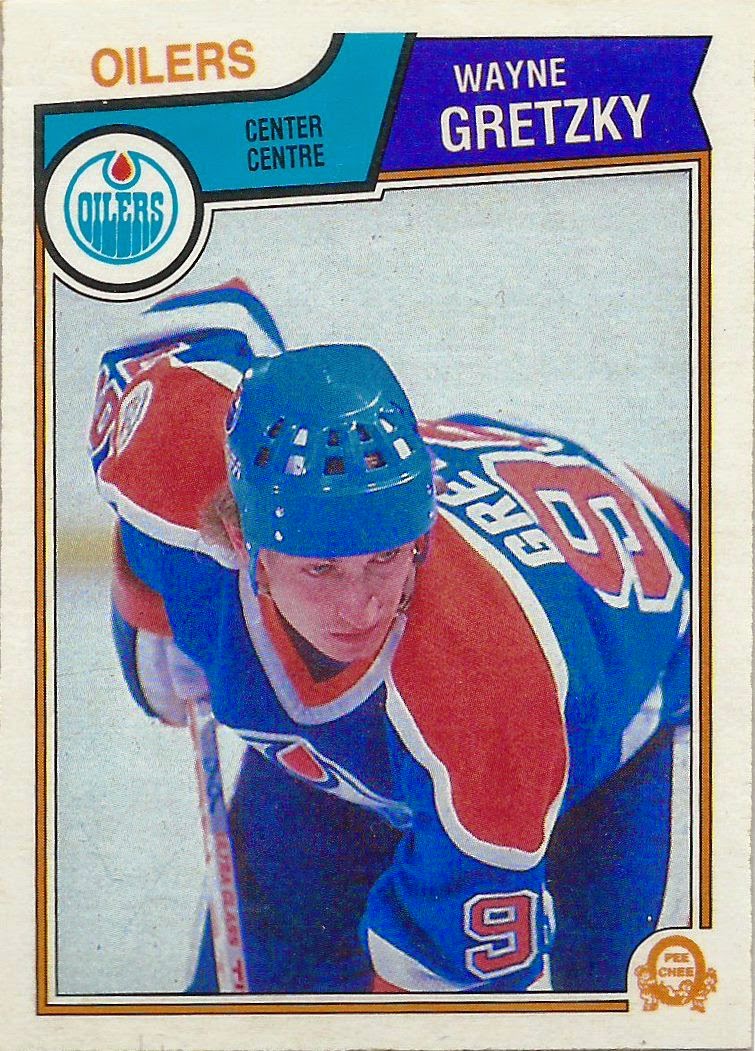 Pull this from a pack as a kid and cherished it for many many years. Really happy to have it as apart of the set. Not the best Gretzky card, but I do like the front design of these cards and appreciate the large photo, stick/puck design at the top as well as the cute OPC logo on the bottom right. 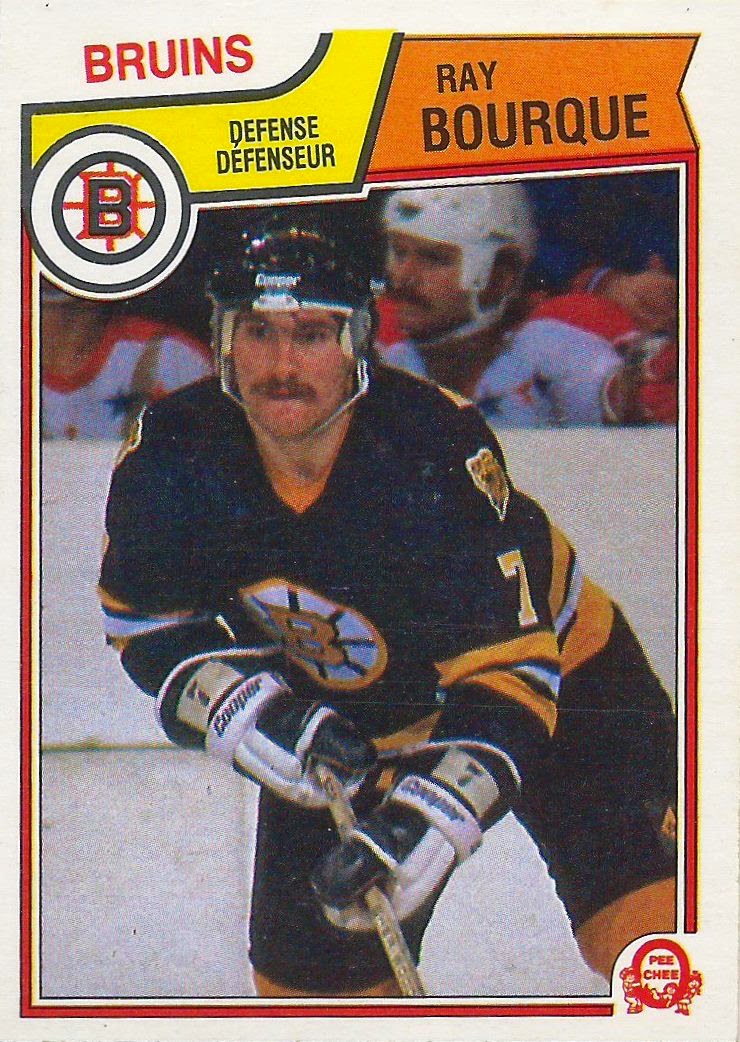 The ultimate mustache card? Ray is definitely sporting an unusual look and I really don't know how long he kept that caterpillar alive on his lip but between that and the unibrow, he did look pretty interesting. But did you happen to catch the mustache in the back on Mr Gartner? Yep, this card is awesome. 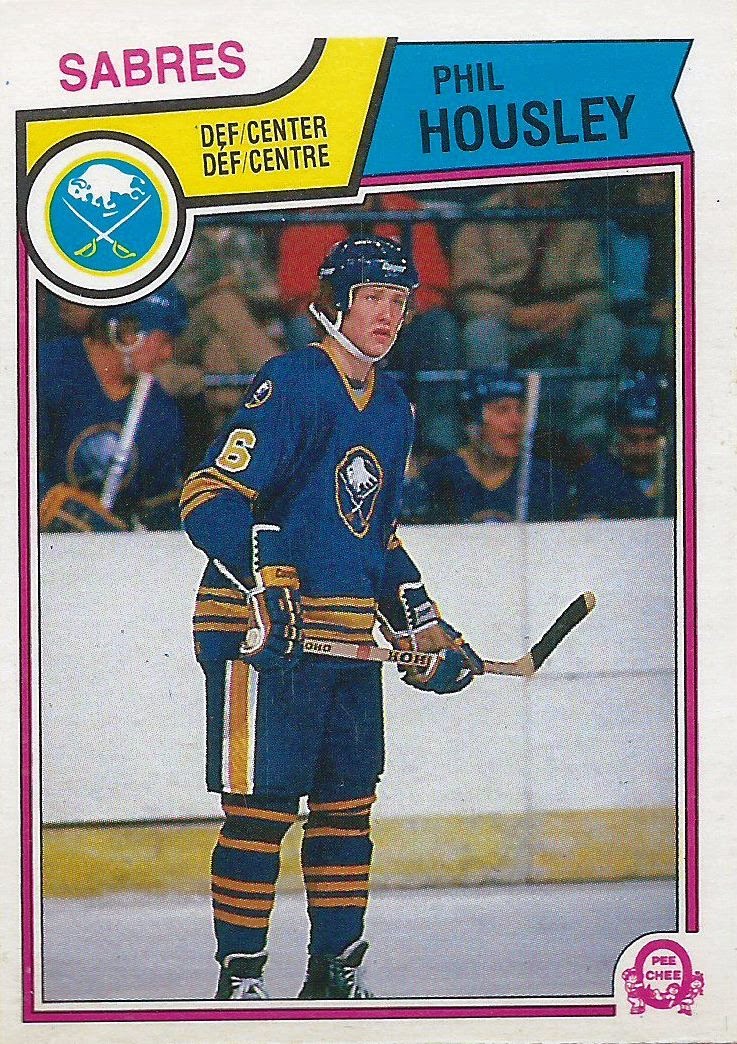 One of the USA HOF rookies you will find in this set belongs to Phil Housley. While he isn't a member of the main HOF yet, I imagine he will get his call someday. In the meantime, this former Devil (among other teams) is a prime example of some rookies you find in the set. Great players who did very well but are often overlooked among the other greats who played during the same period. For example, Phil was every bit as good as Brad Park if you ask me, however Ray Bourque and Paul Coffey both were in their primes along side Phil and as a result he didn't get the same respect he might have had if he was playing during a different time. 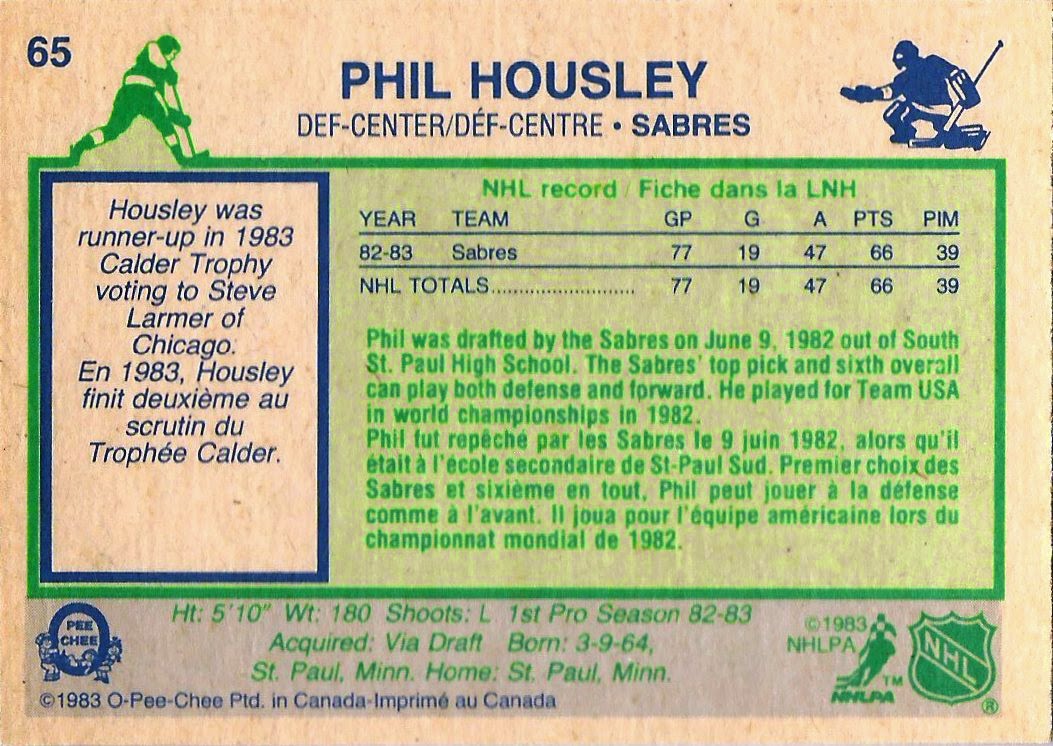 Here is a shot of what the backs of these cards look like. Very simple, very awesome in its subtle ways. The colour scheme is just something different that works well together. The player shooting on the goalie at the top is very neat and the fact boxes are fun to read. There is also a pretty good write-up on most cards to go along with full career stats. I am not sure if many are aware of the Def-Center position but Phil did it well. 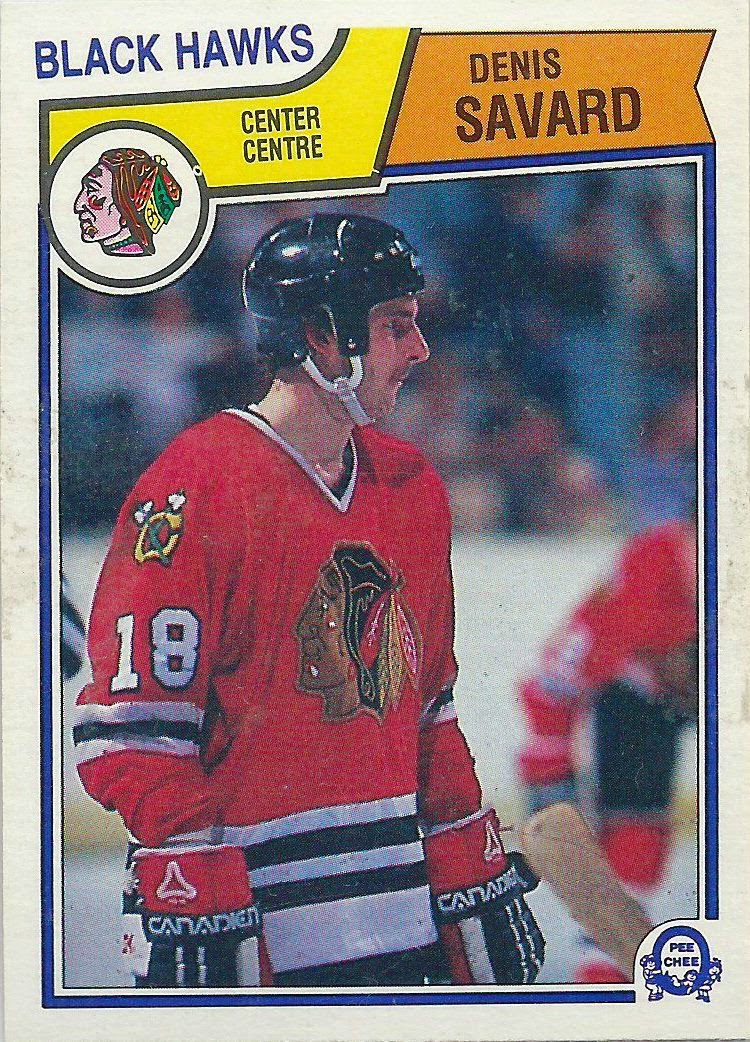 This card is an example of one that has an interesting history. I was at my Grandma's for a family dinner and as we were waiting for supper to be ready I was wandering down the street her condo was situated on (the same condo as Pentti Lund). During my wandering I came across a little garage sale where a kid was selling some cards. This was in my first year of collecting and my memory and knowledge wasn't that spectacular but I saw the above Savard card and the price 2.50. I thought geez this is an amazing price for a Savard rookie and I snapped it up immediately thinking I got an amazing deal. When I got home I was sadden to see that it was his third year card and worth exactly what I paid for it. This card reminds me of the fact that I don't always know everything and while I didn't get an amazing deal that day, I did have a fun day finding cards in an odd location. The dirt on the scan is from the old page the card was sitting in when I scanned it. 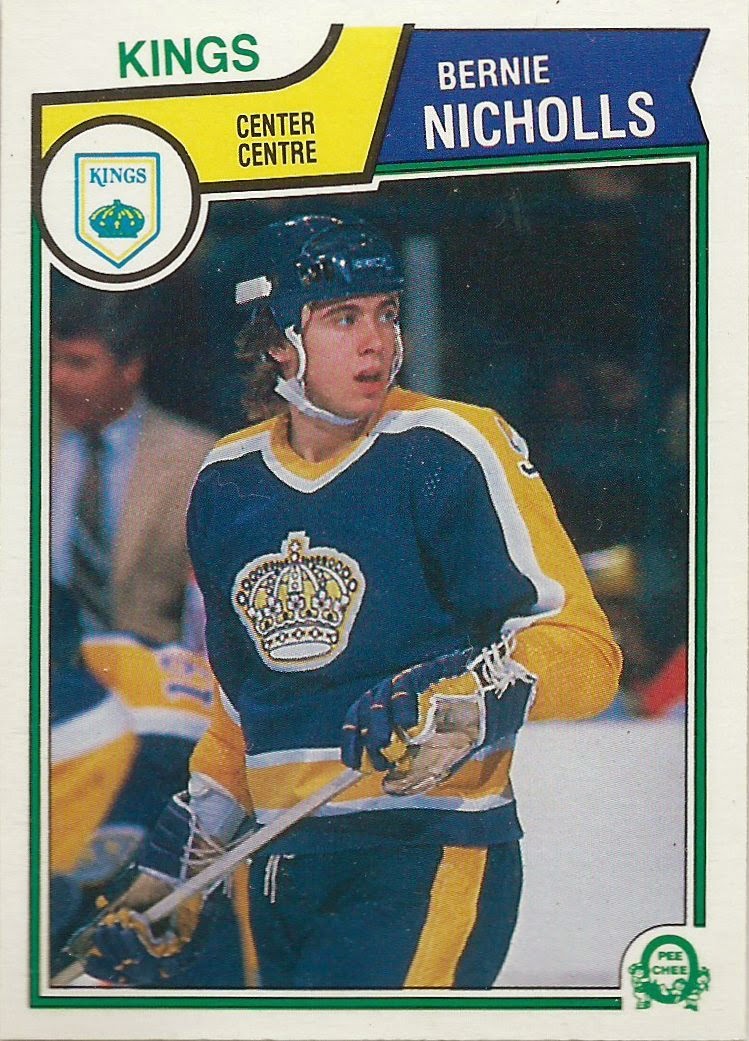 Another player with an excellent career but not good enough to make the Hall. Bernie had a chance to experience the Wayne effect in 88/89. He was a pretty amazing player in his own right but when Gretzky joined the Kings he scored 70 goals (previous high was 46) and 150 points (previous high was 100). This is Bernie's rookie and is another example of the fun gems in the set. 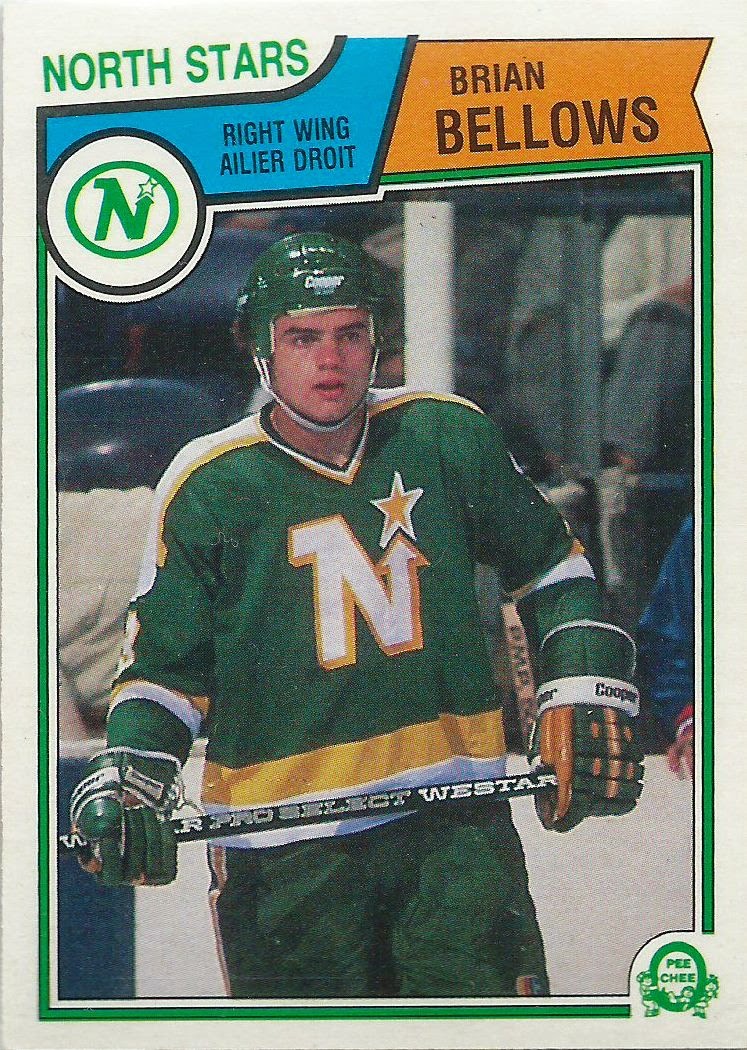 Here is another blast from the past rookie. 50 goal season, yep. 1000 career points, yep. Former top 3 draft pick, yep. But you can still have this card for merely pocket change which seems so wrong to me. Never heard of his stick company before but stuff like that makes this card that much more fun. 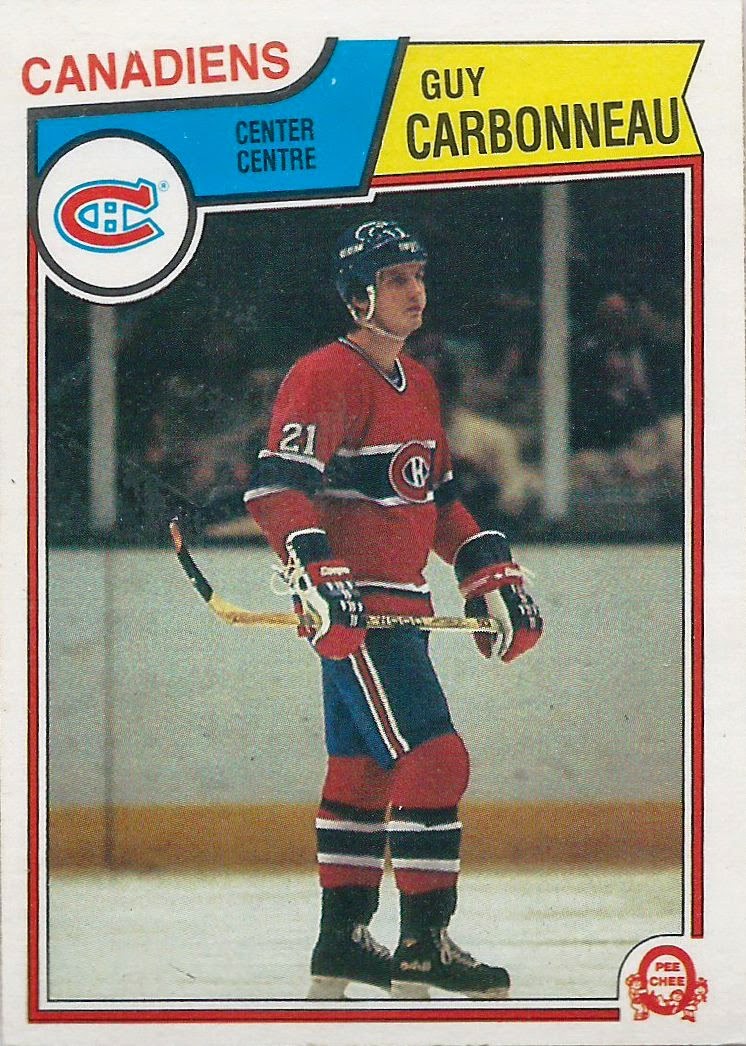 While some might view this card as yet ANOTHER solid rookie of a former NHL star, this card as additional meaning to me. Check out the back. 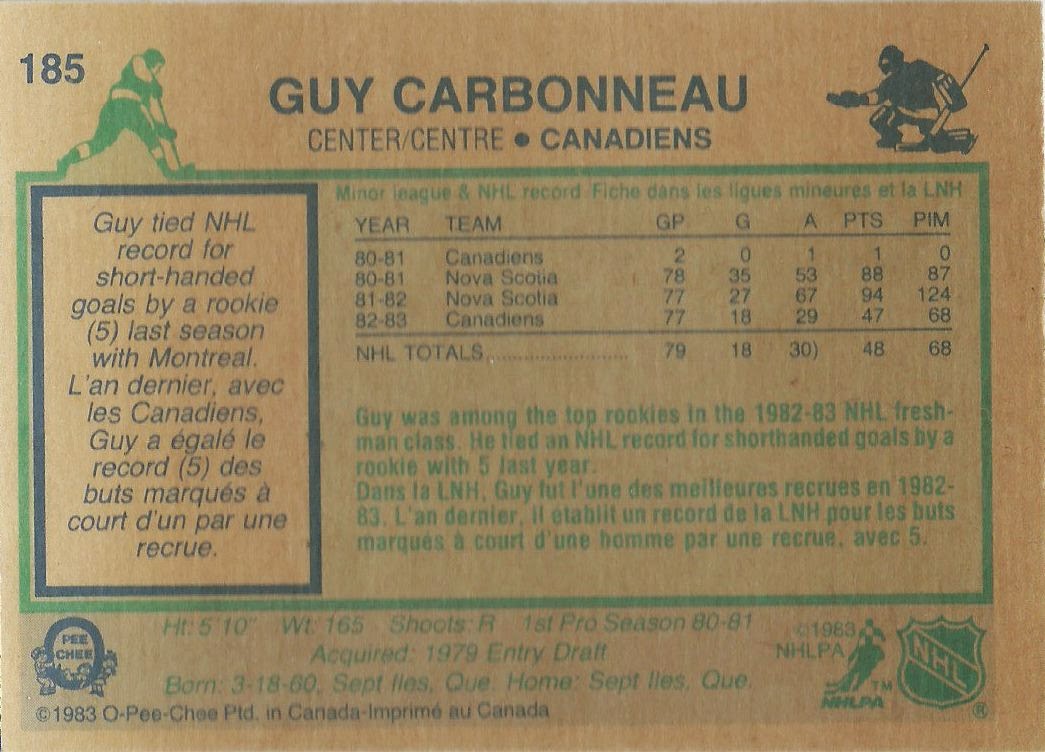 Check out that tan! This baby spent a few years out in the sun, thanks to my step-father. I remember this card sitting in a window sill for a few years with a signed Carbonneau sweatshirt hanging on the wall below the window where this card sat. He was a Habs fan, through and through and he loved his enforcers, Patrick Roy and Guy Carbonneau. I can't remember how I got this card off of him eventually but I knew when I wanted to build this set, this card needed to be apart of that set. While the condition of the card is low thanks to the sun-tan, the value of this card far exceeds what it lists for in the book. 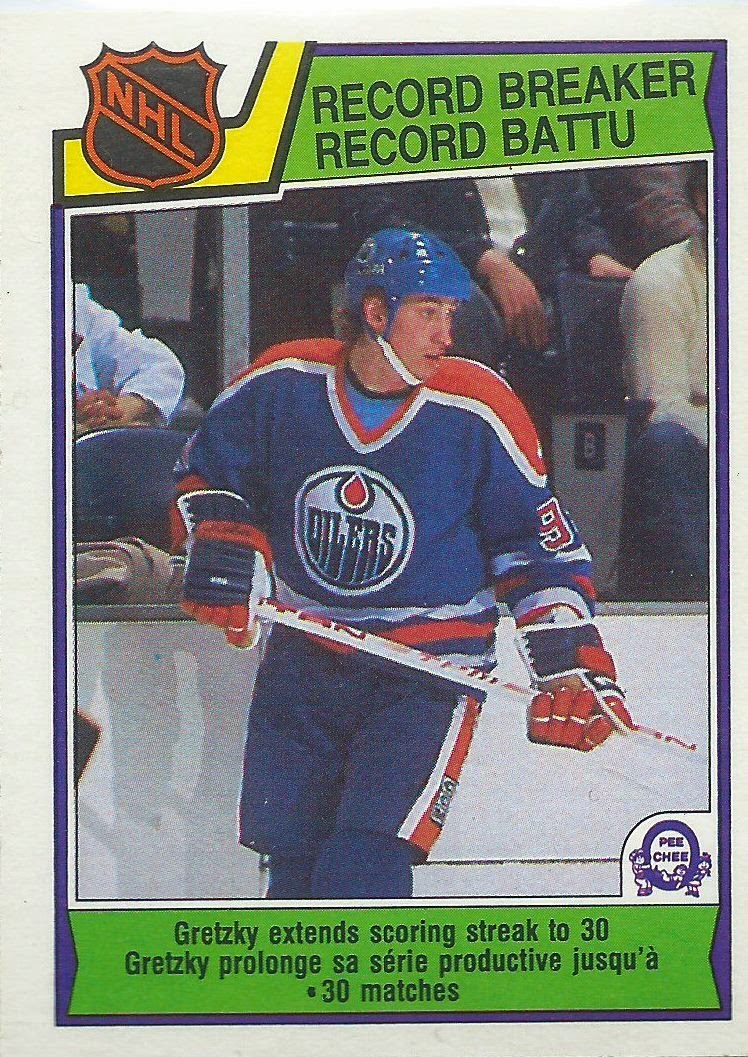 In a set full of Gretzky cards I chose to also share this one because this card was the last one I needed to complete the set. 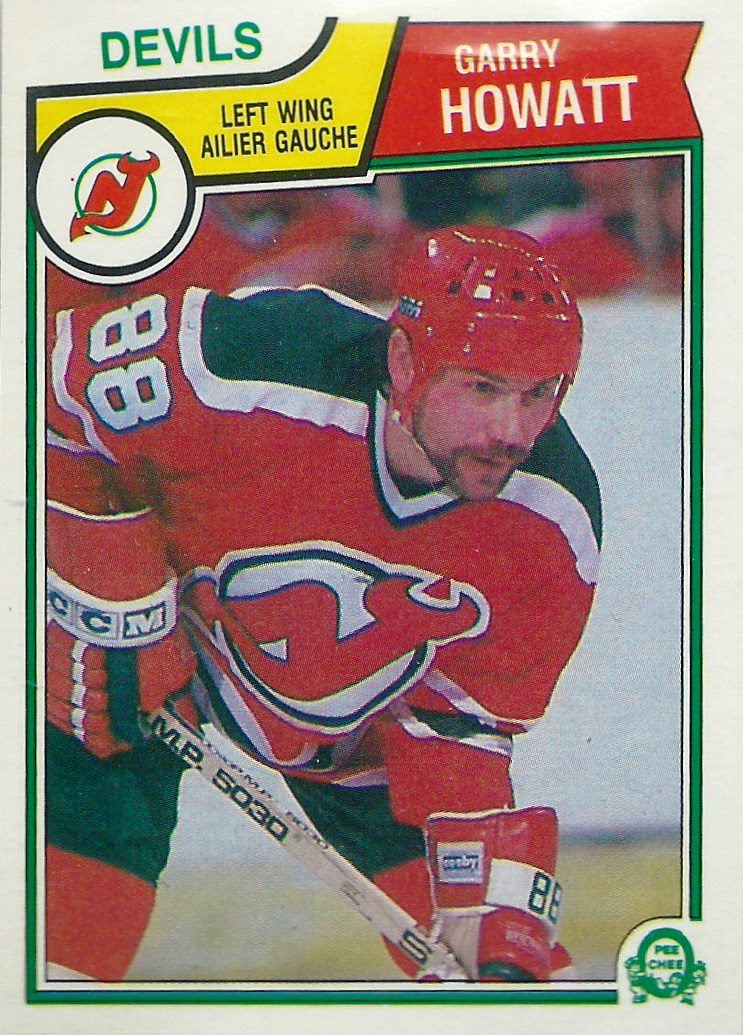 Garry Howatt isn't a superstar or even a star. But, I chose this card because it features a Devil wearing the number 88 which was the first time that ever happened for the franchise. The following year, Rocky Trottier would don the same number. 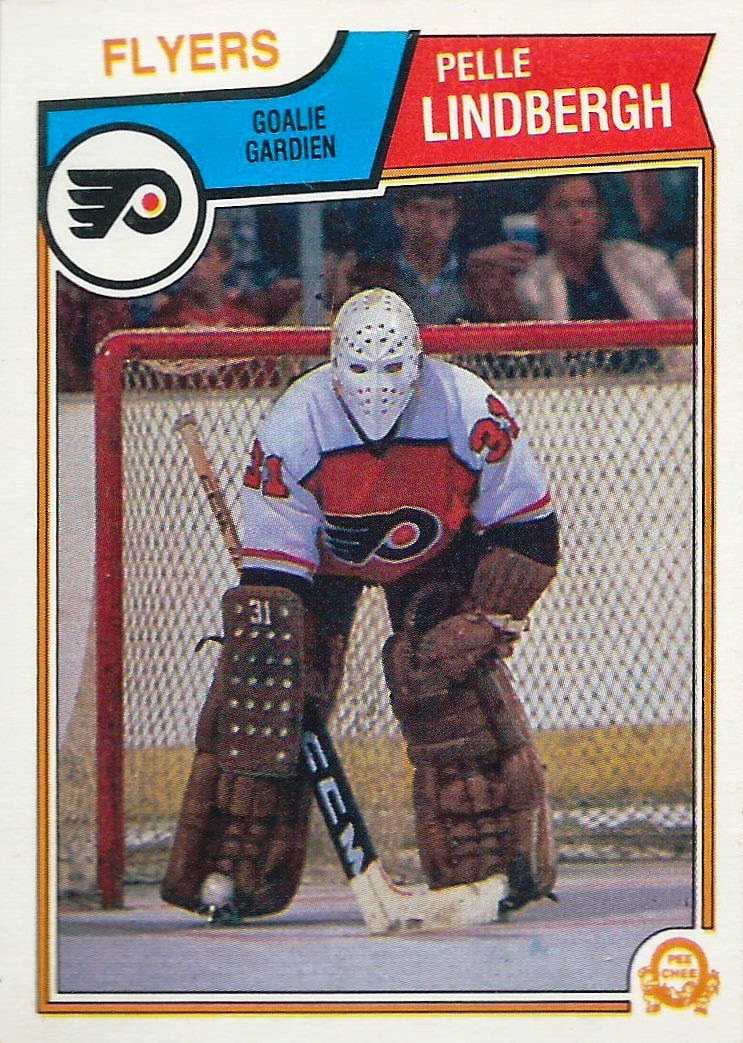 Best card in the set in my opinion. I have my Pelle PC which feature all NrMt-Mt or better cards from his career. I picked up a second rookie for the set so I could keep my PC all together in its frame. Sadly this one isn't mint but is somewhere in the Ex-Mt range. 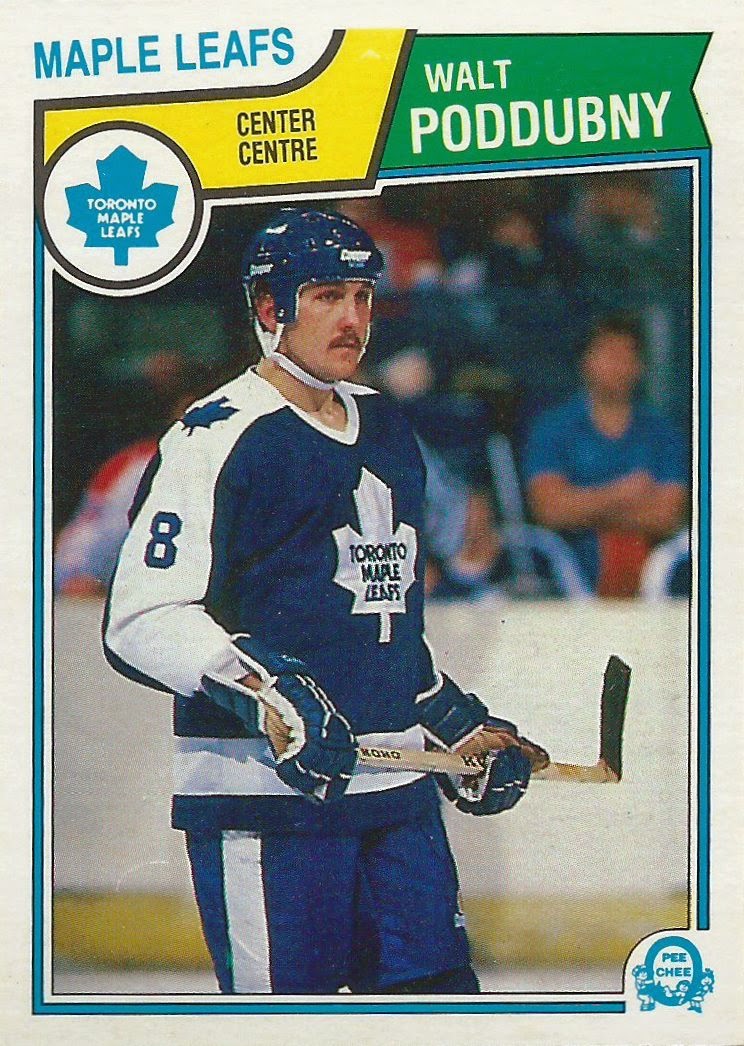 Had to show off the Walt rookie because of my little connection with him as a person. 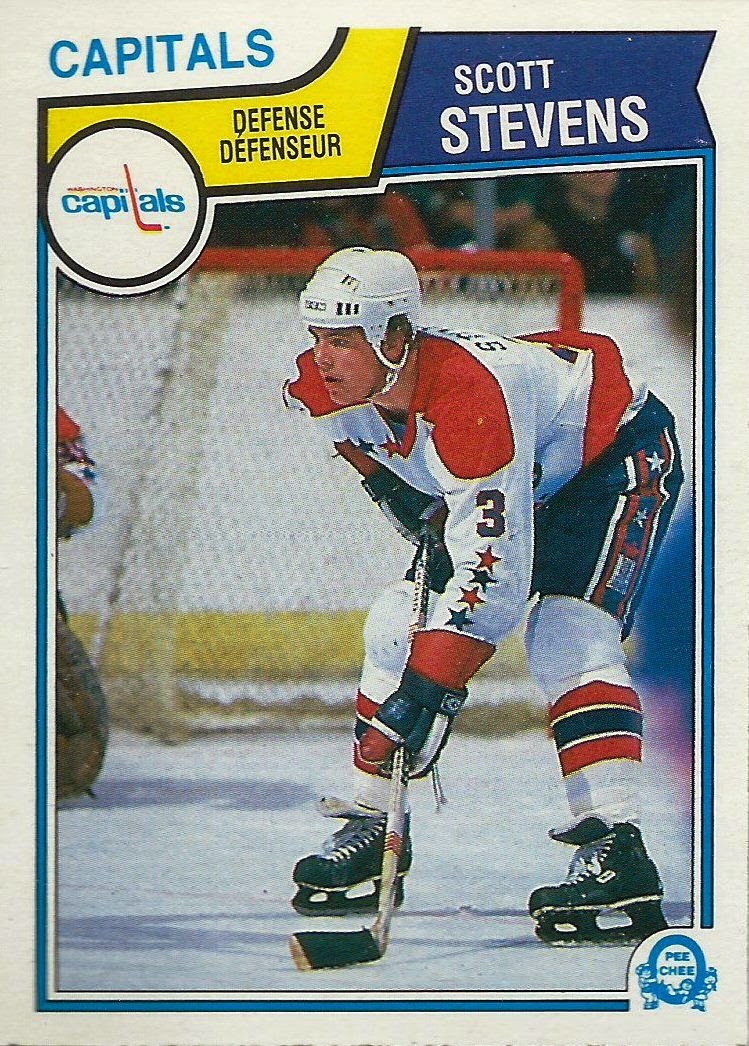 Now for a full-fledged HOF rookie in the set. As far as rookies go, Scott Stevens has had the most successful career of them all. The Lindbergh rookie has the most value ($25 in Sept 2014 Beckett) but Scott Steven has some value ($12 in same issue) and is well within most collector's budgets. As a Devils fan, I already had about 3 or 4 of these so I used one of the non-mint ones for the set. 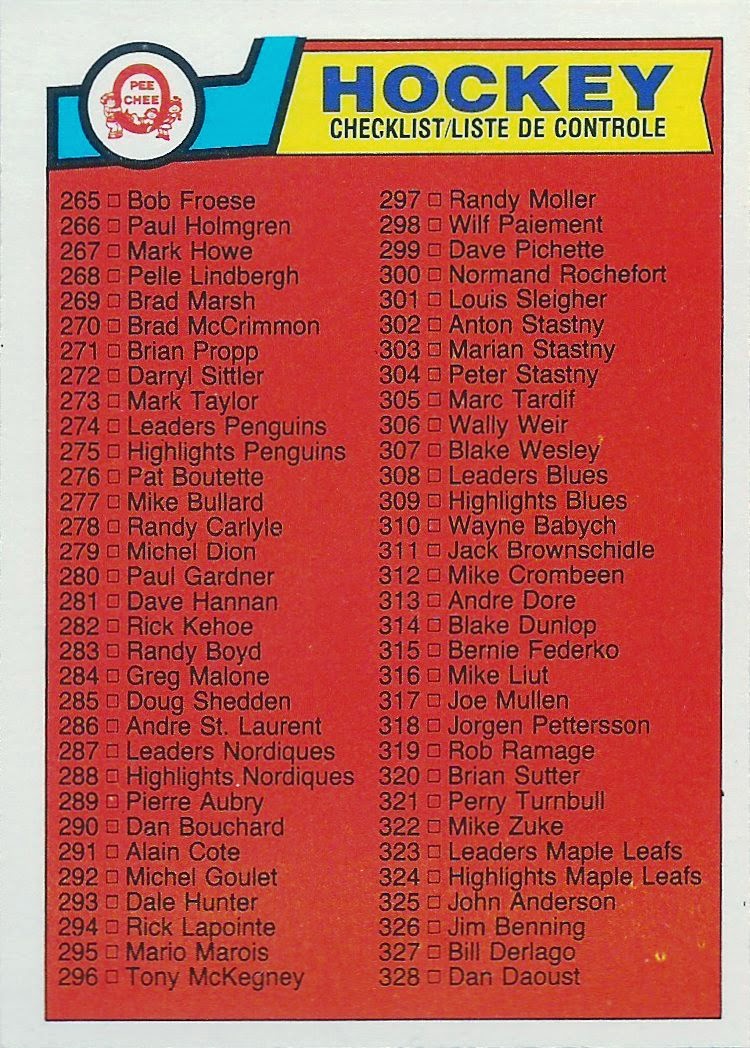 I find its always fun to check out the checklists from the old sets and here is what it looked like in 83/84. The front was a nice bright reddish-orange and the back uses the same text colours as the other card backs and at the top there is just a goalie instead of a goalie and player.

So there you go, a set all done and a set well done. With a set book value of 125 dollars, you really can't go wrong with this set and when you consider the fact they can be had for under that price you really can find something to love about this set knowing it isn't going to break the bank. When things are all said and done, I am sure I paid close to full set value with my pack breaks and purchases etc but the journey to the end and the sentimental value these cards have to me far exceeds any book value and I am proud to have checked this one off. Now I should turn my efforts over to some of the other sets. I will share another one I am working on hopefully in a few weeks.