Before I do this review, I must make a small confession. I used to be addicted to Collector's Choice. I still feel dirty saying it, but at one time it was true. During the mid-90's there used to be a game where inserted in Collector's choice packs were "You Crash The Game" cards where if the player scored on the day mentioned you could send away for a special set of cards. Anyway, I won a few of those sets and when they turned out to be worth very little, I was able to kick that habit pretty quick. Fact of the matter, the old Collector's choice were pretty cheap to buy, pretty cheaply made and they were mostly a novelty, at least for me. They didn't live very long and were eventually replaced with Victory for a low-end card.

Flash forward 10 years and Collector's Choice is back, and much like before the cards are sporting their strange font and lack of quality in design. Not much has changed except the price, they packs are now $1.49 instead of $0.99 so I afforded myself one pack. Let's take a look.

The front design is pretty simple, the cards have a gloss to them and the photography isn't horrible. 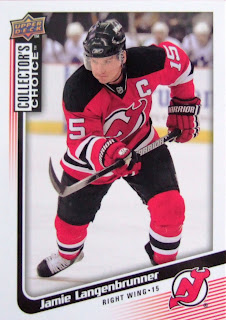 On the back side, they stick to the basics with simple information and complete career stats. There is no write up on base cards but the rookies do have a small blurb on the backs. The design on the back is different than the old product, I am glad to see they dropped Chippy like 4th period French. 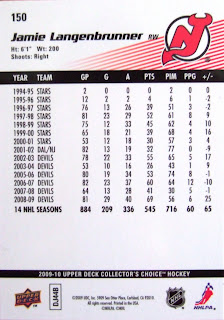 Look Mom, no hologram! Again a sign that this is indeed a low-end product.

As for as my $1.49 goes, I was pretty lucky in getting a rookie, I got San Jose Goon Frazer McLaren 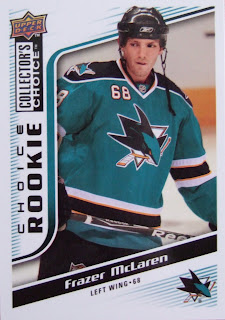 Each pack includes one insert card and mine was the 3 star selection of the Calgary Flames. 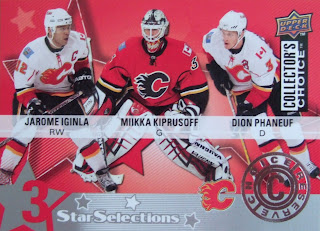 Well, as for as the low end cards, I believe this is the lowest. The design isn't quite where MVP is and in fact I believe that Victory is a better product. This set really is designed and intended for KIDS. I don't know if true collectors would make this their choice, but the set does one thing well and that is delivers NHL licensed hockey cards for cheap!

Card Quality 3/10 (Cheap look, without the nostolgia that OPC offers)
Photography 3/10 (Very basic, almost childlike design)
Inserts 1/10 (Would have been a zero if it wasn't for the sp rookies)
Value 2/10 (This will be my only and last pack of CC for this year)

This is really a set for little kids. Think of it as Fisher-Price hockey cards, it teaches them how to collect so that one day they can rip open tins of The Cup and boxes of UD.
Posted by Pro Set Cards at 1:22 PM No comments:

I would like to have an order of McNuggets, fries and a coke. I would also like to have 3 packs of card with that too please. I can't count the number of times I have gone to my local McDonalds and ordered lunch and hockey cards.

It all began back in 1991-92 when Upper Deck and McDonalds collaborated to make a small set which had 25 base cards composed of NHL's who played in the All-star game and 6 hologram cards. The cards were of pretty decent quality for the time and they even had a hologram on the back in the shape of the McDonalds M. The next season they did the exact same thing and over the 14 years McDonalds did change companies who would make their cards but the ability to get hockey cards at McDonalds was always there. Then comes 2005 and a new rookie is in the NHL and Upper Deck and McDonalds release one of the most wanted base cards in McDonalds history and that is a Crosby rookie card. There was much debate if it would even be considered a RC but when the dust settles it is considered to be a true rookie and is one of the more affordable ones on the market. Here is one on ebay


It would turn out to likely be the last Crosby McDonalds card because of the deal Crosby has with Pepsi and since McDonalds is a Coke distributing restaurant those two topics will not mix. Now it is 2010 and once again a McDonald's set is available. I have stopped trying to collect a whole set, not just for my health but rather it seems to be a little bit of a gimmick these days. There are some good inserts that are very hard to come by, but the base cards are pretty worthless.

They are of decent quality, in fact I find they are every bit as good as UD Ice's product, but rather there is a noticeable lack of rookies. The last rookie to grace a McDonalds card was Rob Schremp. I for the most part I am a rookie collector and I can't justify buying more cheeseburgers than Randy from the Trailer Park Boys and ripping dollar packs like they are going out of style because in the end there will only be a bunch of base cards which aren't any different than the other middle road base sets. I still feel a patriotic duty to buy a few packs here and there even if only for nostalgic sakes. Here is a look at the product. 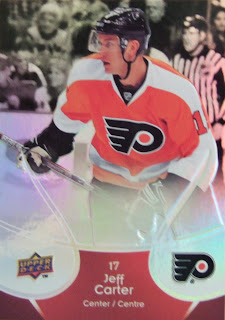 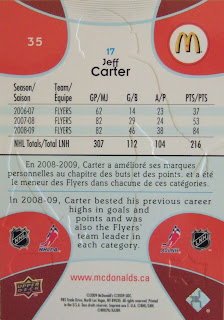 As you can see, there is a texture to the card much like UD Ice and Ovation, and there is a hologram on the back which again suggests that this is at least a middle range quality card. Each pack has 3-4 cards and there are some inserts including acetate cards, and other redeemables. Writing on the back is in both official Canadian languages. 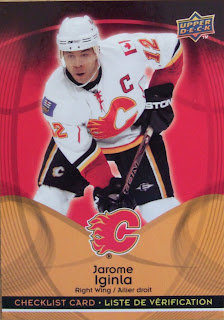 I was able to get a checklist from the pack I am showcasing. These are inserted 1 per 4 packs which isn't especially rare and there were 6 checklists in total. Though I didn't show it here, in one of my other packs I bought this year I did have one real "hit". I pulled a Joe Thornton Pride of Canada card which is an acetate card. They are available at a rate of 1:40 cards which isn't too bad for only buying 8 packs this year from McDonalds.
Posted by Pro Set Cards at 3:44 PM No comments:

Upper Deck via Facebook has asked people to share some of their greatest hockey moments and that reminded me the day I met Gordie Howe. First of all, it really isn't going to be anything that someone will make a story about in fact it might be considered by some to be rather insignificant. But almost 20 years later I still remember it.

He came to town to skate in the warm up of the Thunder Bay Senators. They were a pro team that was two steps below the NHL but had some pretty decent talent in their line up.

So after the warm up was over, I ran down to the lobby so that I could get an autograph. Unfortunately it seemed like the entire town was that already in line. So I went to the end of the line and waited. I swear it seemed like it was an eternity that I was in that line up, but by the midpoint of the second period I had in my possession an autographed hockey card.

My interaction with Mr. Hockey was someone limited likely due to the fact I was scared shitless. I said Hello and Thank you and his response was only a couple of smiles and a Hello. But it was that tiny exchange that I still remember to this day, it may have lasted a couple of seconds but I was given something that really had a lasting impression. Since then I have met other professional athletes many of them hockey players, but without a doubt, that was my favourite. 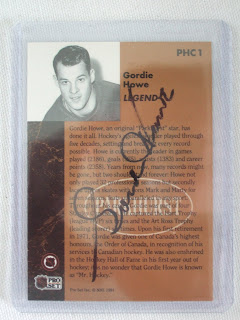 The card I brought with me was from the 91-92 Parkhurst Set. This card really isn't terribly valuable on its own, but I loved the set at the time and to this day still feel it was the nicest set produced that year.
Posted by Pro Set Cards at 3:08 PM No comments:

Upper Deck MVP is a product that has been on the market for a number of years. It is a lower end product that UD has consistantly produced and in my opinion is one of the better low end cards available. The cost per pack is about $2.50 in Canada for a retail pack and you have a 1 in 2 chance of pulling a rookie. The design of the card this year is a little fresher than past years and I think they have done a great job with it. The photography isn't on the same level as the base Upper Deck set, but when you compare MVP with OPC and Victory there is an obvious quality difference and MVP is the winner. In addition, there are 2 on 2 jersey inserts and autographs randomly inserted in packs but the autos are really difficult to pull.

Here is a rookie I pulled from my sample pack. 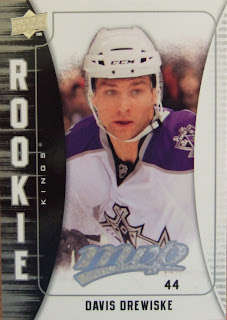 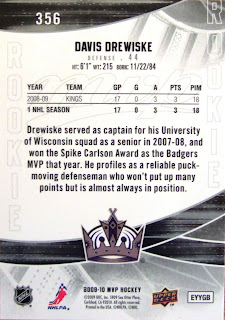 From a collectors stand point, pulling a rookie is always nice, but Davis' greatest accomplishments to date may be his completion of college rather than his pro career. He has 1 goal and 8 points in 40 games with the Kings. I am thinking this card may be one of his last.


The nicest card I pulled was the checklist of Crosby. 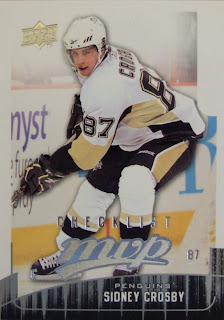 In all it is a decent card for what you pay for. I think that next to the UD base set it is one of the better values on the market. It is a pretty large set to try and complete if you include all 94 sp rookie cards, but if you want an affordable set with all the main rookies from 09-10 this is your set.

Card Quality 6/10 (no hologram on card, an UD sign of low end product)
Photography 5/10 (better than past years)
Value 7.5/10 (good price point, nice jersey card potential and all the rookies you want)
Posted by Pro Set Cards at 3:48 PM No comments: