Pair of Vanek Rookies, Malkin isn't the only getting double love.

Vanek is just one of those players I like a great deal but of course being in a small market doesn't get the same recognition around the league like someone with similar talent in a larger market. For example, if you compare him with other 2003 classmates you may be surprised to know he has more points than: Jeff Carter, Milan Michalek, Dustin Brown, Zach Parise, Mike Richards and Corey Perry! In fact, Eric Staal is the only player drafted in 2003 who has more goals than Thomas Vanek and even then it is a mere 18 goals with Vanek player 100 fewer games.

Hard to believe with credentials like that his rookies are dirty cheap and his autos are similarly priced. I was very fortunate to get a couple TTM's from Thomas a while back, and I also found a few rookies to join my collection that didn't come close to breaking the bank. 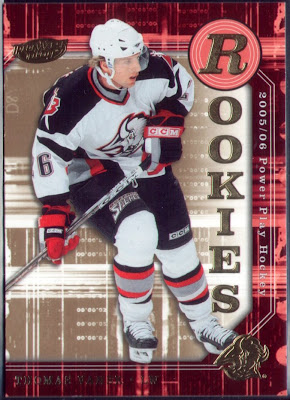 If you want a rookie from 05-06, you can sometimes expect to pay a lot considering the number of quality rookies making their appearances that year. However, UD Powerplay offers decent looking rookies for very low prices. Crosby's rookie can be had for 20-30 bucks from this set on eBay. 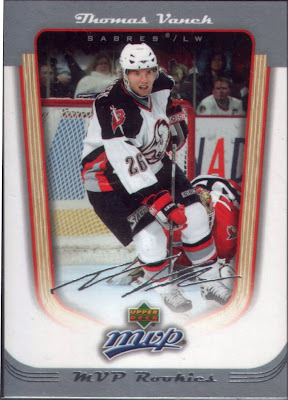 Here is another low-mid range rookie. With the hot start Vanek had this season, prices on his cards did jump a bit, but my LCS had this priced based on 2011 prices so I landed it very very cheap. I do like the facsimile auto on this card which some didn't have.

While these cards aren't terribly exciting, they are nice rookies that like Malkin, won't break the bank and are well within what many collectors can afford. Vanek's Young Gun Rookie is also very attractive in price and appearance and I since I don't remember if I have one or not, I might want to figure that out first before I try and track one down....
Posted by Pro Set Cards at 8:00 AM