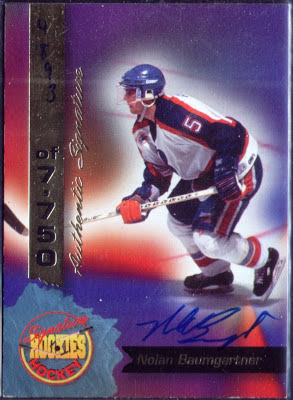 I loved this guy as a kid. He played for my favourite junior club at the time Kamloops (pictured in card above) and he captained Team Canada to two World Junior golds. Didn't have the same success in the NHL, but was a solid pro defenseman mostly in the AHL. 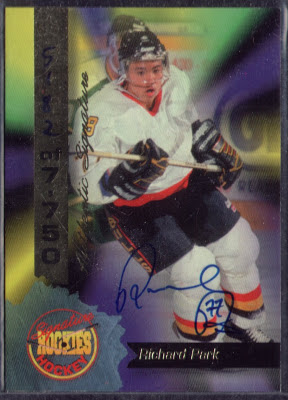 Former Belleville Bull Richard Park is the next auto in this post. Richard was a very solid third-line centre in the NHL and even though he never matched his junior numbers in the NHL, he did play over 700 NHL games and he did  have a 40 goal season in the AHL. 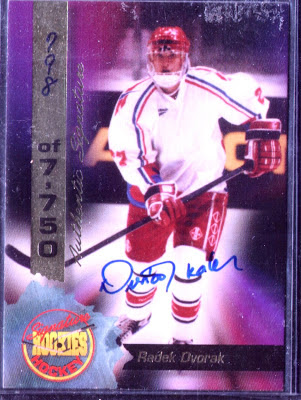 Of all the autos, maybe Radek had the more successful NHL careers. He appeared in over 1100 NHL games and he hit double digits for goals 12 times and had a career high in 2000 with 31 goals. Radek isn't very familiar with the playoffs however, despite his long NHL career, he only saw the post-season 4 times. The fun thing is, two of the four times were Cinderella runs (one with Florida and one with Edmonton).

97-98 Pinnacle Be A Player  Jocelyn Thibault 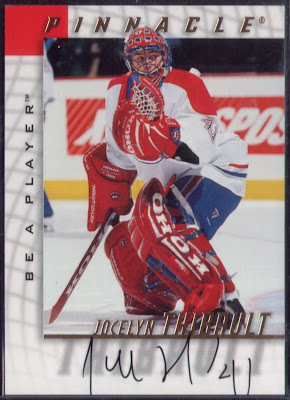 Thibault was a decent goalie for a while, but I can't say the same for his auto, what a mess. His career was pretty solid, 51st in all-time wins with 238 and 36th all-time with 39 shut-outs. Jocelyn may have only won as many games as he lost, but his g.a.a was a very solid 2.75 and in 02-03 he helped make the Blackhawks respectable posting 8 shuouts!

Cheap autos without making yourself feel cheap! I got a few more in that lot deal, but I am saving them for later posts.
Posted by Pro Set Cards at 1:07 PM