As I mentioned in my previous post, I do like the Blackhawks and when I can come across players I like I will try and snatch them up. Here is another Kaner for the collection. I actually had two rookies of his Upper Deck Young Gun (great story to this one, but for another day) and his Ovation Rookie which I have given up for dead as a TTM request. So being a rookie down and being a fan, I couldn't pass up this gem for low Beckett value price at my LCS this fall. 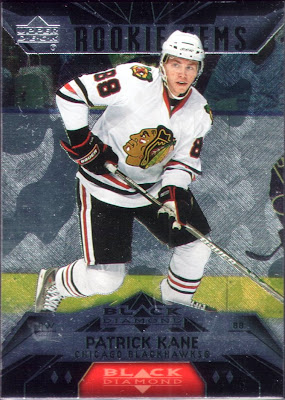 In true Black Diamond fashion, the card scans like hell and looks way better in person. Unlike some Black Diamond rookies I have seen in the past, it is in awesome condition with great corners and is easily Nrmt-Mt which is saying something since some of these cards seem to come out of the pack in sad shape.  I am not sure if this is a keep or trade card for the long-term since I already have a mid-range rookie.

Kane is off to a great season so far proving he deserves to be among the NHL elite this season with 38 points in 30 games which is good enough for 5th in league scoring. With the improved performance and looking finally looking like he did in 09-10, it sort of makes owning a couple rookies feel just that much better and since I really don't own many Black Diamond rookies, the card is doing double duty at the moment.
Posted by Pro Set Cards at 3:30 PM