Don't Be Saad, Marcus is here but all good things must end.

The series of Blackhawk posts are about to end with their future. What Chicago has accomplished the last 9 years or has been remarkable. They were a club in the NHL basement, they won a Cup, got in trouble with the cap, blew up their team, and then rebuilt themselves into a power house once again. Not only do they look pretty good now, but with a collection of solid prospects they Hawks look good going forward. Here are two such prospects: 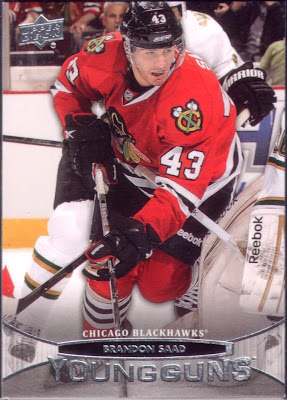 Brandon was off to a slow start this season but recently has picked it up scoring 12 points in the past 11 games and is seeing a little more ice time as a result. 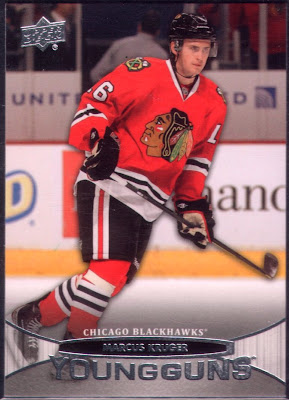 Unlike the wing position, the centre position is a little more jam-packed so Marcus isn't getting the same ice time as Brandon mostly because they are pretty deep at the centre position with Toews, Bolland and Shaw all getting their fair share of ice. Still, he is making pretty good use of his time and in another season or two should be a pretty solid second-line centre. 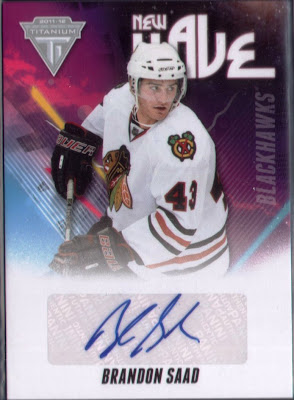 Here is an auto of Brandon Saad to go with my three Kruger autos. This is a rookie year signature of Brandon which isn't the same as an auto rookie, but sometimes that is just good enough!

So there you have it, a few Hawks related posts in honour of my favourite original 6 team. I will be back to posting about everything else in my collection with little rhyme or reason to the order! Thanks for checking in.
Posted by Pro Set Cards at 8:00 AM